The link between the two families was obvious as Vandals coach Nick Casey hugged Richie Well on Thursday afternoon.

Casey was an assistant coach under Rich Well in 1996, when the Vandals baseball team set the school’s season wins record at 19. This year’s team broke that record with a victory over Gillespie, with Casey at the helm and Well’s son, Richie, holding the Miners to just three hits in a complete-game effort. The win also made the Vandals conference champions for the first time since 2003, with Tim Summers as the head coach.
On Saturday, the Vandals improved their season win total to 22 with two wins in the Ish Smith Baseball Classic. They have won 14 of their last 16 games.
Now, the Vandals are aiming for postseason success, starting with their Thursday afternoon contest with rival Greenville in regional play. The Vandals and Greenville have split so far this year, with Greenville edging the Vandals early, 4-2, and Vandalia winning their South Central Conference matchup, 3-1.
With his son, Nathan, among those on this year’s roster, coach Nick Casey has been working with these players for a long time.
With all that was accomplished in the Thursday win, “All of the years start flashing back, thinking about these kids when they were 9.
“All of their hard work has paid off for them,” Casey said. “It’s just awesome."
Contributions from everyone in that game is something that Casey is accustomed to. “We have (had that) all year,” he said.
“And, today, we got a great pitching performance again by our senior (Richie Well), and that’s what we needed – that’s why he’s 6-0. He was just really good today,” Casey said.
“We’ve just got a good group of kids right now,” he said.
Despite the fact that he was pitching in a game that meant so much to the VCHS program, Well didn’t approach it any differently.
“Just throw strikes, put the ball in play,” he said about his approach. “I know that I’ve got a good defense to get the outs for me, and that’s what happened tonight.
“We got base hits left and right, doubles, we got RBI’s, people made plays,” Well said. “It was just a good game all around."
A lot of the team’s success is due to its chemistry. “We can play around with each other, but at the same time, we can get in a serious mode, where we know it’s time to step up and make some plays,” he said.
The win put the Vandals alone atop the SCC with an 8-1 record, one win better than Greenville and Piasa Southwestern (7-2). Gillespie and Staunton finished SCC play 6-3, Carlinville was 3-5, Pana was 2-6, Litchfield and Roxana were 2-7, and Hillsboro finished 1-8.
The Vandals jumped out to a 1-0 lead in the first, with Well reaching on a double, stealing third and scoring on the first of five Gillespie errors.
Gillespie responded with a run in the bottom of the first, but the Vandals took the lead for good with a four-run second inning.
Garett McNary started the rally with a single, and he moved to second on an error that allowed Cody Phillips to reach base. Both runners advanced on a wild pitch, McNary scored when a sacrifice bunt by Thomas Ritchey resulted in another error. Phillips and Ritchey then scored on a single by Marcus Zimmerman, who stole second and scored on a single by Well.
In the sixth, Well walked and Casey, who had been walked intentionally twice, singled. Well scored on a ground out by Alec Schroeder and Casey crossed the plate when McNary reached on an error.
Zimmerman scored the final Vandalia run in the second, reaching base on a single and scoring on a double by Casey.
Vandalia – Zimmerman 3/5, 3 runs, 2 RBI, double; Well 2/4, 2 runs 1 RBI, 1 walk, double; Casey 2/3, 1 run, 2 RBI, 2 walks, double; Jones 1/4; Schroeder 0/5, 1 RBI, Morrison 0/3, 1 walk; Austin 0/1; McNary 2/3,1 run, 1 walk, double; Ruckman 0/2, 1 run; Phillips 0/2; Ritchey 0/2, 2 runs, 1 RBI, 1 walk; Wells 0/0.
On Saturday, the Vandals scored three times in the eighth inning to defeat Salem, 6-3, then notched their 22nd win by topping Pinckneyville, 10-8.
Kelly Jones got the win, improving to 6-1 on the season, in the first game, and Matthew Wells (6-1) went four innings in getting the win against Pinckneyville, with Jones getting a save.
Vandalia vs. Salem – Zimmerman 1/4, 1 run; Well 3/4, 2 runs; Casey 2/4, 2 runs, 1 RBI; Jones 2/4, 1 run, 2 RBI; Schroeder 1/4, 1 RBI; Morrison 1/4, 1 RBI; McNary 1/2, 1 walk; Slater 0/1; Wells 0/3, 1 walk; Ritchey 0/4; Ruckman 0/0.
Vandalia vs. Pinckneyville – Zimmerman 1/2, 2 runs, 2 walks; Well 2/4, 2 runs; Casey 1/3, 1 run, 2 RBI; Lotz 0/1; Jones 2/3, 2 runs, 2 RBI; Guffey 0/1; Schroeder 1/3, 1 run; Isringhausen 0/1; Morrison 2/3, 1 run, 2 RBI; McNary 0/2, 1 RBI; Phillips 0/1, 1 run; Austin 0/2; Ritchey 1/1, 1 RBI; Wells 0/0. 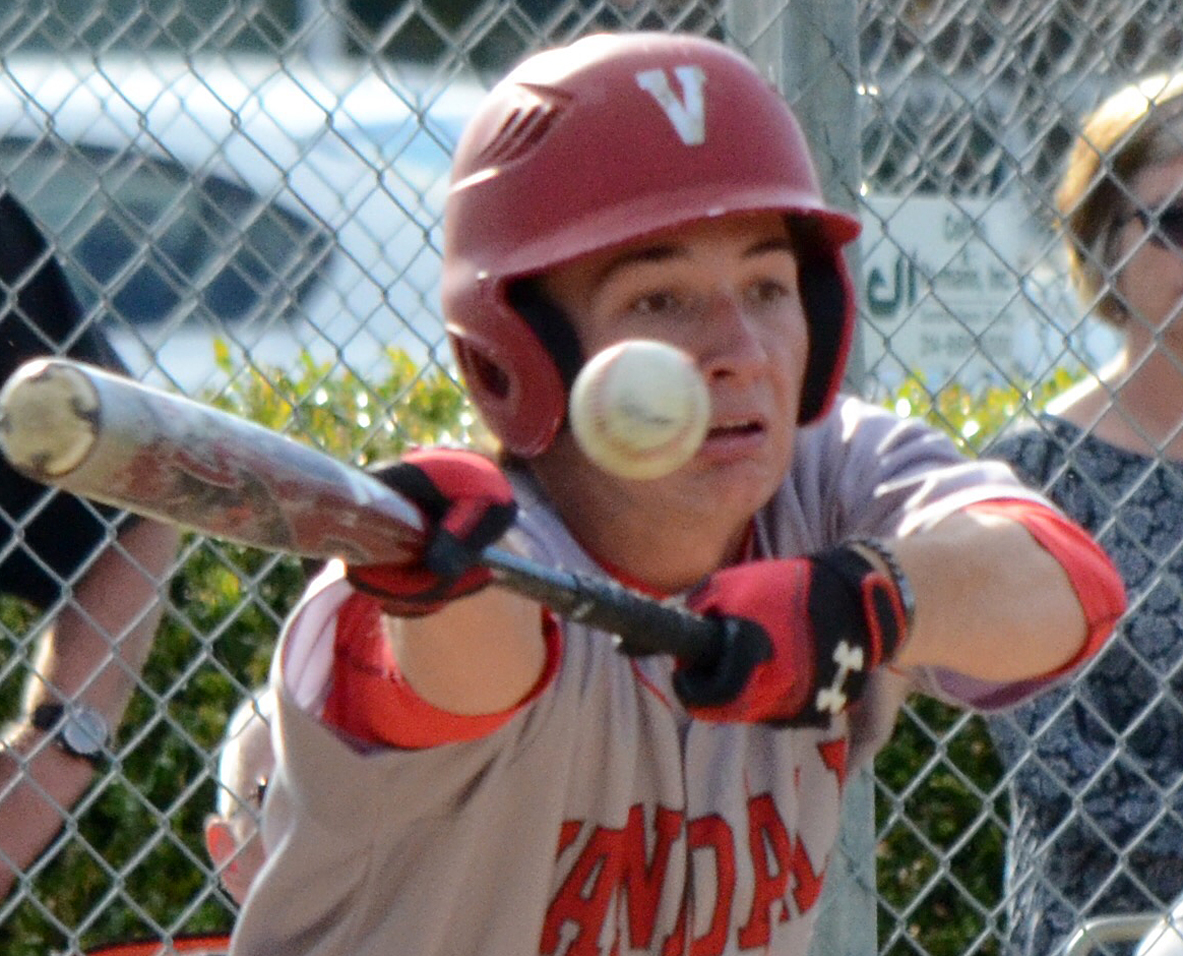 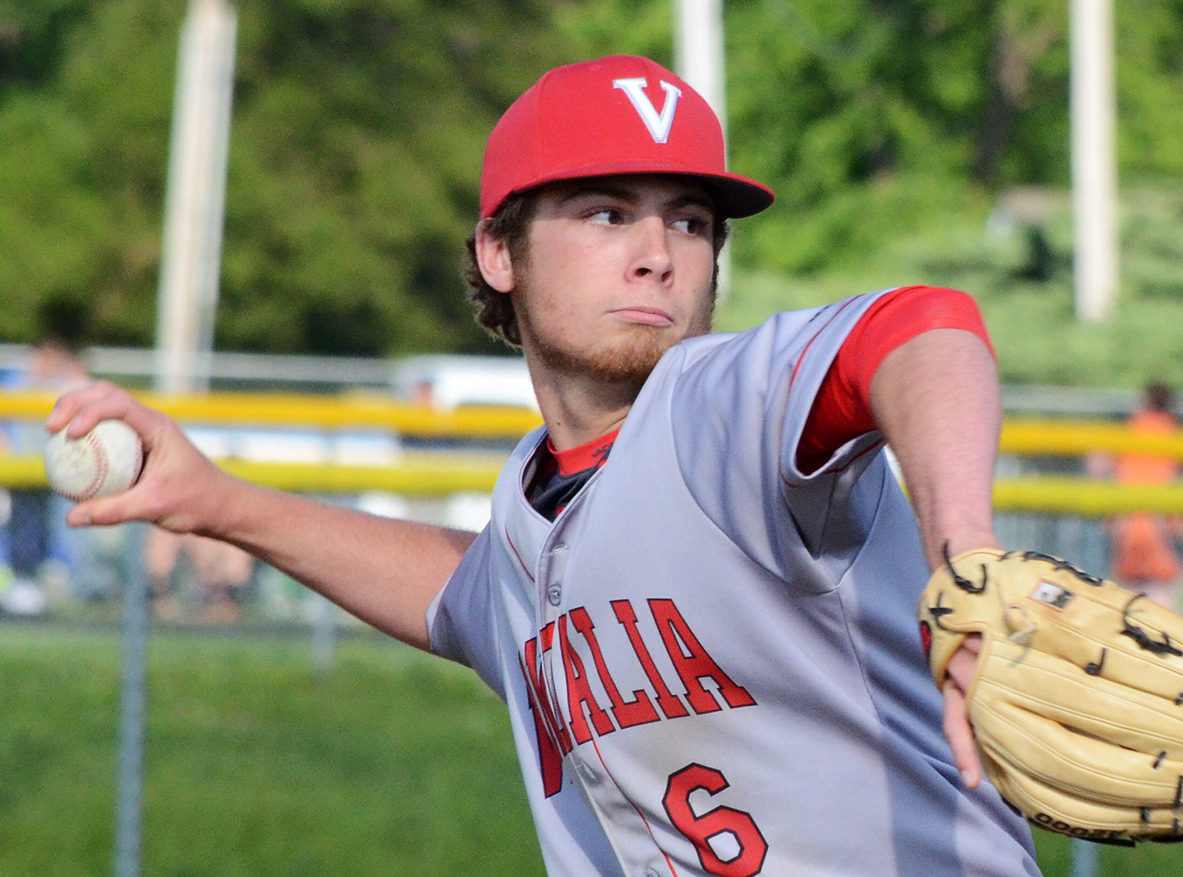 Photos by Rich Bauer In his final South Central Conference game as a Vandal, Richie Well held Gillespie to just three hits and struck out eight as Vandalia won a conference title in baseball for the first time since 2003 and broke the school’s season win mark with its 20th victory at Gillespie. 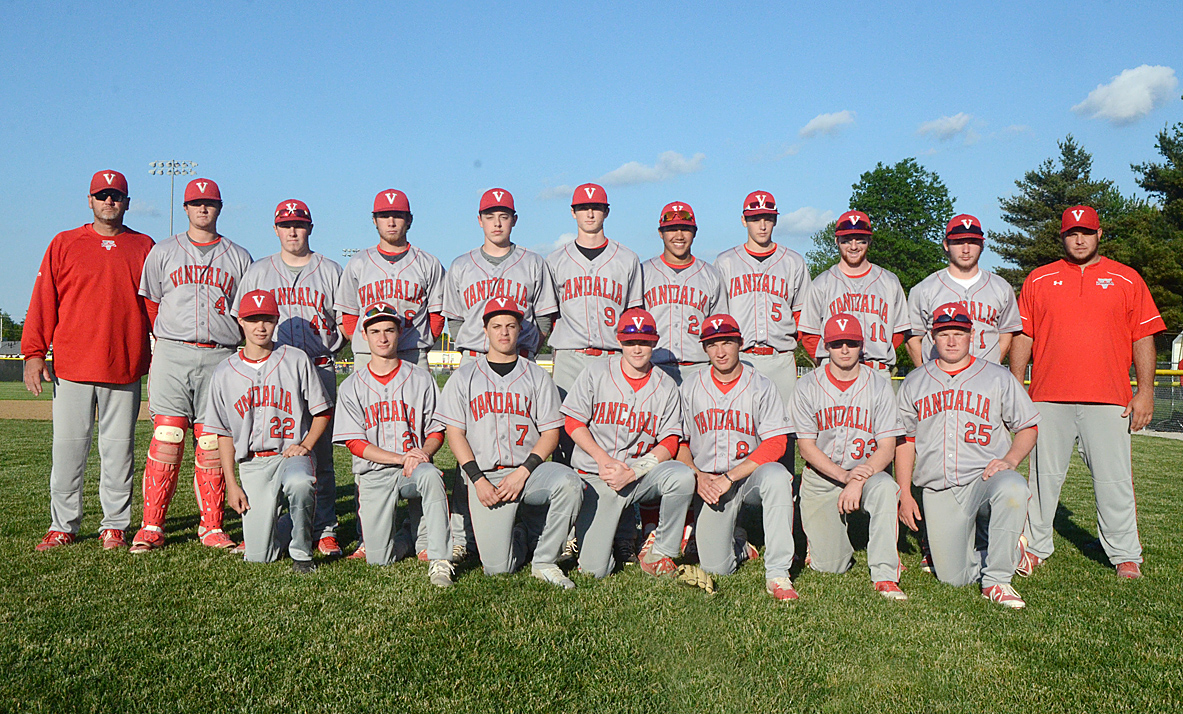