The future of the local recycling programs will be discussed during a meeting next Monday afternoon at Vandalia City Hall.

Alderman Ken Hubler, chairman of the city council’s cemetery and landfill committee, announced that a meeting on recycling is set for 4:30 p.m. on Monday.
“I’d like to have people think of how we can save this stuff, or we’re going to be in trouble,” Hubler said.
During a committee meeting last month, Kim Taylor, executive director of FAYCO Enterprises, said that unless there is a way developed to fund FAYCO’s recycling program, it will be eliminated on July 1.
Taylor told The Leader-Union that FAYCO has lost as much as $30,000 a year with the operation of the program, with losses due to the price of recyclable commodities dropping in recent years.
Items accepted by FAYCO at its recycling facility at 2022 Wagner St. include magazines, newspapers, cardboard, plastic, and steel and aluminum cans.
FAYCO has operated the recycling program since the fall of 2012.
Also at the March committee meeting, Karen Sanders talked about problems experienced with the electronics recycling program offered by the Fayette County Soil and Water Conservation District at its office at Third and Johnson streets in Vandalia.
Sanders said that while the SWCD collects electronic items on Wednesday afternoons, people are dropping them off at other times, often not paying the fee of $5 per load.
“We need to have everybody pay for it, because we have to have the money to pay our expenses,” Sanders told The Leader-Union.
In addition to that issue, the SWCD has sometimes experienced vandalism to its collection trailer.
Fayette County is one of the few counties in this part of the state that offers electronic recycling, which means that people from outside the county are among those using the local program.
That, Hubler said, points out the need to keep that program going. “If we don’t have that, we’ll probably have (these things dumped) all over the county,” he said.
Also at Monday’s meeting, Mayor Rick Gottman presented gifts to two individuals for their service as city alderman.
He first honored Jerry Swarm, who was attending his final meeting on Monday night.
Swarm has served as an alderman in Ward I, the southeast part of the city, from 1985-97 and from 2006-17. His second stint as an alderman began when Gottman appointed him to a vacant seat in 2006, and he was subsequently elected to the seat three times.
Steve Barker, who won the seat held by Swarm at the recent election, was present for Monday’s meeting.
In presenting the gift to Swarm, Gottman said that swarm “was a great alderman when I served as an alderman with him, and I think he’s done a great job for Ward I.”
The mayor noted that in addition to serving on the city council, Swarm has “done a lot of volunteer work. I know that his heart is her in this community.”
Gottman also presented a gift to John Moyer, who inadvertently wasn’t honored when he stepped down from the city council. Moyer served in Ward IV from 1989-2002, leaving the council to accept the position of public works director.
“John was a great alderman, also,” Gottman said.
Also at the meeting:
• Alderman B. John Clark, chairman of the streets committee, reported that the city will soon be implementing new rules and regulations for landscape waste disposal, including what will be accepted and in what form.
The Leader-Union will publish those rules and regulations as soon as they become available.
• The council voted to sell two lots that the city acquired through legal action in order to demolish dilapidated structures. The lots are at 1026 W. St. Louis Ave. and 414 W. Jefferson St.
Gottman said that the city likely will not get its money back on the sale of these properties, “but I want to get them back on the tax rolls.”
• The council was initially scheduled to vote on an ordinance amendment increasing the number of Class E liquor licenses to seven, but that matter was tabled, Gottman said, because of other parties likely applying for such a license in the near future.
• Resident Trevor Towler voiced two concerns about the dog park on the east end of Madison Street.
Towler said that the one-way traffic sign is too high on the post, and not easily seen, and that people using the park are not complying with the city’s leash law.
Gottman said the city would take a look at both issues.
• Aldermen received documents showing monies received by the state, including its 5-percent share from gaming revenues in April from February figures: 6th Street Pub, $343.64; American Legion, $584.01; Redwood, $896.84; Cages, $1,129.75; Lucky’s, $0; Moose Lodge, $711.62; VFW, $267.31; Daphne’s, $456.55; Embers, $578.18; FS Travel Center, $2,180.59;  FS FastStop, $956; Spin2Win, $1,220.55; The Cork, $584.42; Vandalia Country Club, $733.61; Willy’s, $208.84; Jack Flash, $2,045.31. 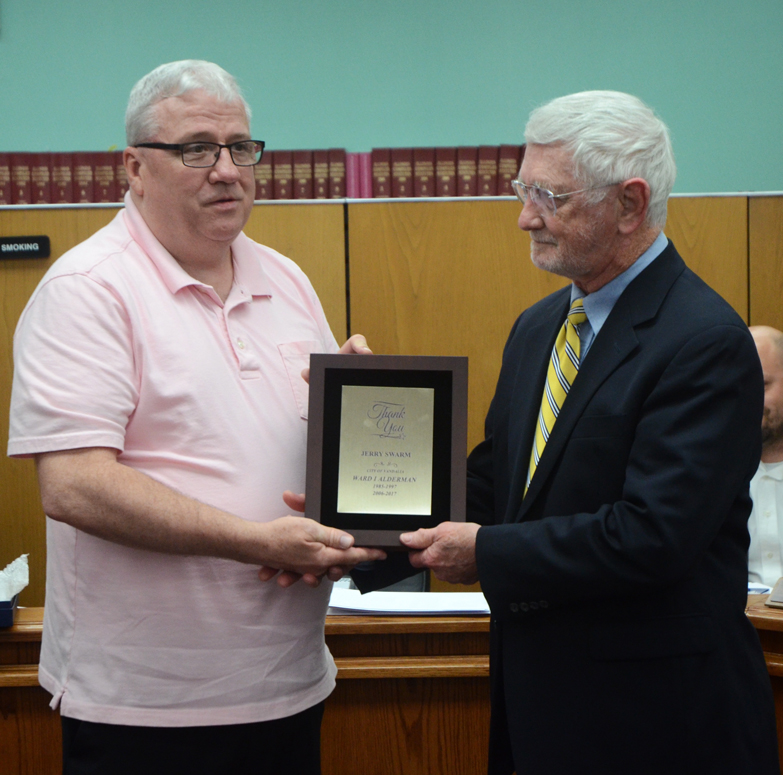 Vandalia Mayor Rick Gottman presented gifts to two men on Monday for their service on the Vandalia City Council. Above, Gottman, left, presents a plaque to Jerry Swarm, who was attending his last meeting as a Ward I alderman. Swarm served from 1985-97 and 2006-17. 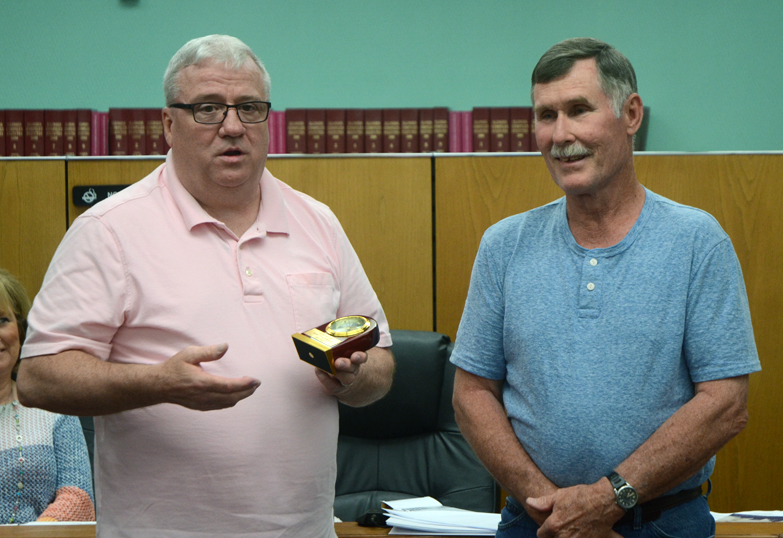 Vandalia Mayor Rick Gottman presents a clock to John Moyer, who was a Ward IV alderman from 1989-2002 before resigning to take over as the city’s public works director.