A Brownstown man has been charged with a felony offense for his role in a January crash that resulted in the death of another Brownstown resident.

Joseph D. Beshel, 46, was charged in information filed last Thursday in Fayette County Circuit Court with aggravated driving under the influence.
Special prosecutor Matt Goetten filed the information, which alleges that on Jan. 19, Beshel was “driving a motor vehicle under the combined influence of alcohol and another drug, rendering him incapable of safely driving (that) motor vehicle.
In that condition, the information alleges, Beshel was “involved in an accident that resulted in the death of another person, Scott T. White.”
The offense charged in the information is a Class 2 felony offense with a special sentencing provision. While a Class 2 felony is ordinarily punishable by up to seven years in prison, the special provision as charged carries a maximum penalty of 14 years in prison.
Goetten presented the information in court last Thursday, at which time Fayette County Resident Circuit Judge Don Sheafor determined that there was sufficient probable cause to issue a warrant for Beshel’s arrest.
During that hearing, Sheafor set Beshel’s bond at $75,000.
Beshel turned himself in at the Fayette County Jail on Friday, and Beshel made his first appearance in court on Monday, asking Sheafor for time to hire private legal counsel.
Beshel is scheduled to make his first appearance with legal counsel on April 4, when a preliminary hearing will be held.
According to a press release issued by Fayette County Coroner Bruce Bowen on Jan. 19 several hours after the fatal accident, Scott White, 47, was eastbound on U. S. Route 40, about a quarter of a mile west of County Road 1470E, was attempting to turn left into a driveway when a passing eastbound truck driven by Beshel struck his vehicle.
Bowen said that White was transported to Fayette County Hospital in Vandalia, where he was pronounced dead in the early morning hours of Jan. 20.
According to court records, Beshel was charged with driving under the influence of alcohol in May 2010.
In January 2011, Beshel entered a negotiated plea of guilty to the charge and was placed on probation for two years and sentenced to 20 days in the county jail, according to court records. 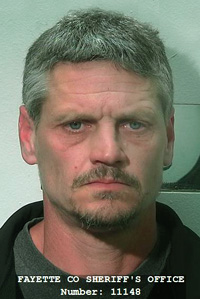