The Vandalia Chamber of Commerce on Saturday honored two individuals who have worked in different ways to help the community through their volunteer efforts.

Presented Abe Awards during the chamber’s annual banquet at America’s Best Value Inn were Jerry Swarm and Charles Barenfanger.
Presenting the first award, John Goldsmith noted that Swarm’s service to the community has included serving as a city aldermen for 22 years, in two stints dating back to 1985.
During his time on the council, Swarm, who has announced that he will not seek re-election this spring, has “served on every committee possible, and often, he has chaired many of those committees.”
Swarm also served on the Fayette County Habitat for Humanity Board for six years, including four as president of the board, and was involved in community service projects as a charter member of the Vandalia Optimist Club.
Goldsmith said that he has known Swarm since he (Goldsmith) was hired as the executive director of the National Road Association of Illinois in 2007, and said that Swarm has been “a dedicated, behind-the-scenes person for the association and National Road Interpretive Center.
“To me, what makes him an Abe Award recipient is his devotion to the National Road Interpretive Center and promoting Vandalia.
“Whatever needed repaired, built, painted, moved or carted away, Jerry was there to do it,” Goldsmith said.
“He has spent countless hours volunteering at the National Road Interpretive Center and an equal number of hours in meetings, conferences, trade shows and other events promoting the interpretive center and, in doing so, promoting Vandalia as a tourism destination … not just a stop, but a destination.
“To me,” Goldsmith said, “he represents all that is good about volunteerism, community pride and being a family man.”
Accepting the award, Swarm said that he had recently looked at the list of past Abe Award recipients in this year’s Chamber Directory produced by The Leader-Union.
“I really feel honored and humbled to be standing in such esteemed company,” Swarm said.
Pat Click presented an Abe Award to Barenfanger.
“He has served (the community) in several ways, and for that, we are very grateful,” Click said. “He has been working among us in the community for many, many years.”
That service, Click said, includes his years as a volunteer fireman. “Anybody who serves as a fireman deserves an Abe Award just for that willingness to serve,” he said.
Barenfanger has also for years been involved in the city’s economic development efforts. “So, obviously, he has a passion to see this community grow and move forward,” Click said.
Barenfanger also served the community as a member of the city’s police pension board and as a member of the Fayette County Hospital District Board of Directors, replacing his stepfather in the latter position.
“He and his family have been very generous to the hospital,” Click said.
Barenfanger is also a member of the Midwest Association of Rail Shippers and American Short Line and Regional Railroad Association, with he and his brother, Walt, being instrumental in procuring short-line rail service after Illinois Central Railroad shut down its north-south rail, and is also a member of the Illinois Aggregate Producers Association.
“This is certainly a surprise,” Barenfanger said, noting that he realized that he was getting an Abe Award when Click mentioned his service the hospital board, something that he has been proud to do.
“We do have a good little hospital that I think is an asset to the community,” Barenfanger said.
He said that he feels Vandalia has some good assets and is taking steps to improve the community.
“I think that Vandalia has done a lot of things right,” Barenfanger said, noting Mayor Rick Gottman’s appointment of Brian Stout as director of economic development and tourism.
“I think there are a lot of things we can take advantage of,” Barenfanger said. 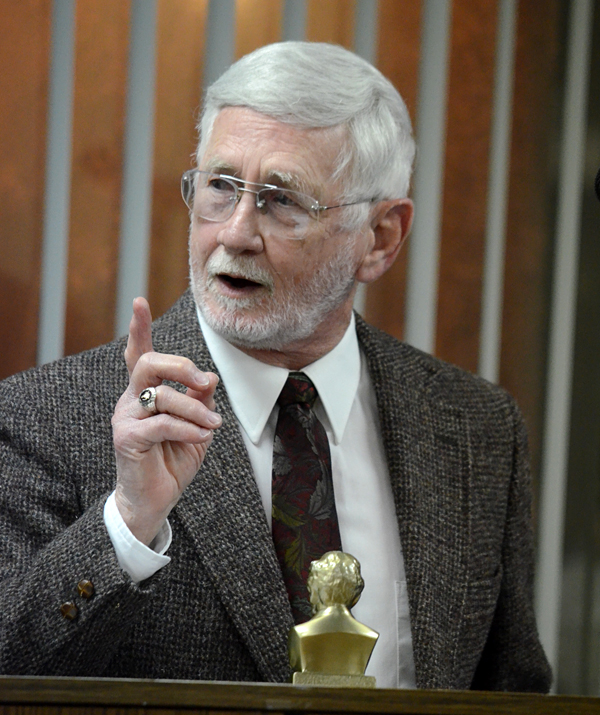 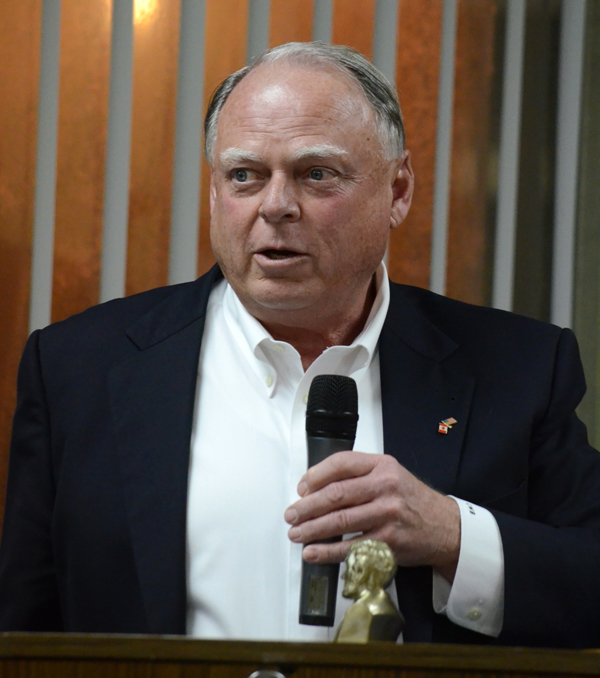