In honor of Dr. Martin Luther King Day and the struggle that took place so far away from my childhood home of Vandalia, I would like to share with our readers the real-time cases from 1840 of four black people, one woman and three men, who had to prove their freedom in Fayette County court.

It was about this time last year while searching in Deed Book C that my attention was drawn to an entry written into the left margin of page 249. It read “Dinah Free paper.”
Dated from Henderson County, Ky., the entry ordered as follows: “Let the Bearer Dinah pass and repass to Vandalia in the State of Illinois without molestation, this the 17th day of August 1833. Signed Sylvanus D. Hancocke.”
The order was duly entered by Thomas C. Kirkman, county recorder and clerk, Sept. 20, 1839, and Kirkman’s entry certified “that this foregoing free paper, belonging to Dinah (color) has been this day truly recorded in my said office. Given under my hand at Vandalia.”
Having never seen one, I called the attention of the county clerk and deputy clerk to the “Free Paper.” The next entry was another surprise and another “Free Paper.”
Recorded on page 250, Leonard White, clerk of Gallatin County, Ill., refers to the Last Will and Testament of John McCallister, late of Montgomery County, Tenn., and named Hailes, about age 21, who “with many others emancipated among whom were his father and mother” who now lived as free people of color in Gallatin County. The affidavit was dated Nov. 5, 1835.
Unable to follow up on Dinah, I turned my attention to John McCallister, owner of Hailes and his parents. Under the spelling of McAlister, John was living in Montgomery County, Tenn., in 1820 with 37 slaves and small family of daughters. A copy of his will is said to have been filed in Gallatin County, Ill., and a follow-up of this document would shed more light on the man Hailes who began life as a slave.
The Black Laws were the law in Illinois, and were Dinah or Hailes to have been stopped without the “Free Paper,” they would have been arrested and held in jail while public notice was made of their capture. This happened to Thomas and Henry Crenshaw, who were captured in December 1840 and could not prove they were free men.
Under the so-called Black Laws, the county sheriff, in this case James Hankins, could hold in jail for one year any possible runaway slave. Two Certificate of Sheriff documents from the Fayette County sheriff tell us what happened to two men, Thomas and Henry Crenshaw, stopped in Vandalia for not having their “free papers.”
On Dec. 23, 1841 Sheriff Hankins signed his name to a document that was then filed by James W. Berry, county clerk. It read in part, Thomas Crenshaw, about 25 years old, 5 feet, 8 inches high, stout build, small scar near the corner of his right eye, “not adducing sufficient evidence of his freedom nor having been claimed by any person or persons, I did hire him out from month to month for the term of one year which expired on the fifteenth day of the present month and no owner having appeared to claim him I therefore in pursuance of the laws aforesaid grant to him this certificate.”
Also, according to law, Thomas then was to appear before the next sitting circuit court and would then receive a certificate of his freedom.
The same went for 22-year-old Henry Crenshaw, a dark mulatto, slim, about 5 feet, 9 inches, wart between his right eye and ear. Other than their presence in Fayette County, I have not followed up on Thomas and Henry Crenshaw, whose former owner could have been the Crenshaw who leased the Salines that were worked by his slaves. Crenshaw’s home, owned by the state of Illinois, is known as the ‘Slave House near Equality, Gallatin County.
The stories of Dinah, Hailes, Thomas and Henry are only four from Fayette County’s long history of not only Underground Railroad activity, but the residence in our county of a large number of freed slaves and former slaves, many who made Vandalia home. 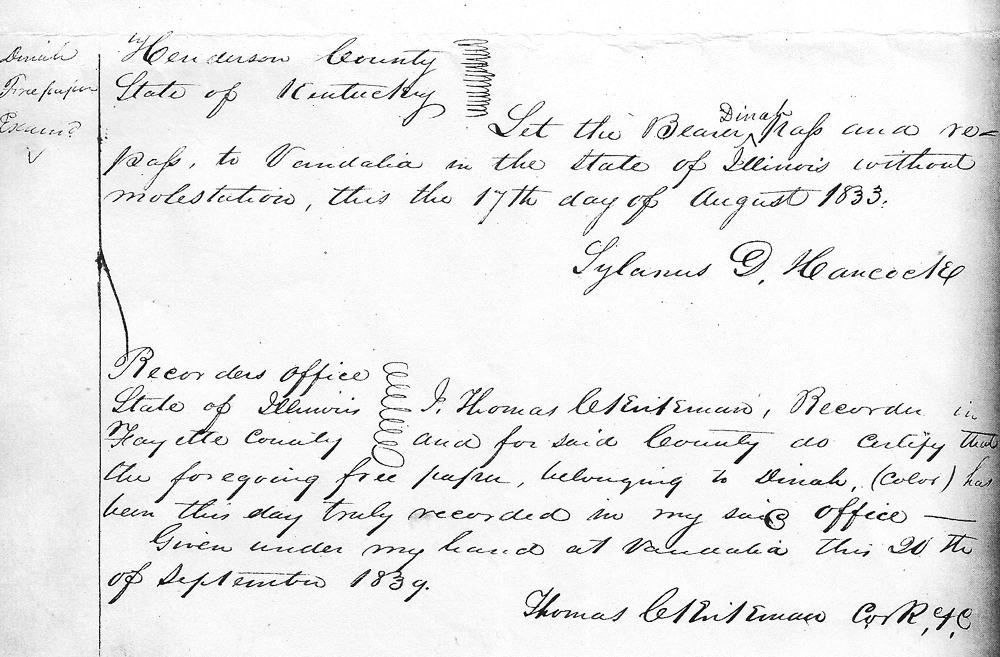 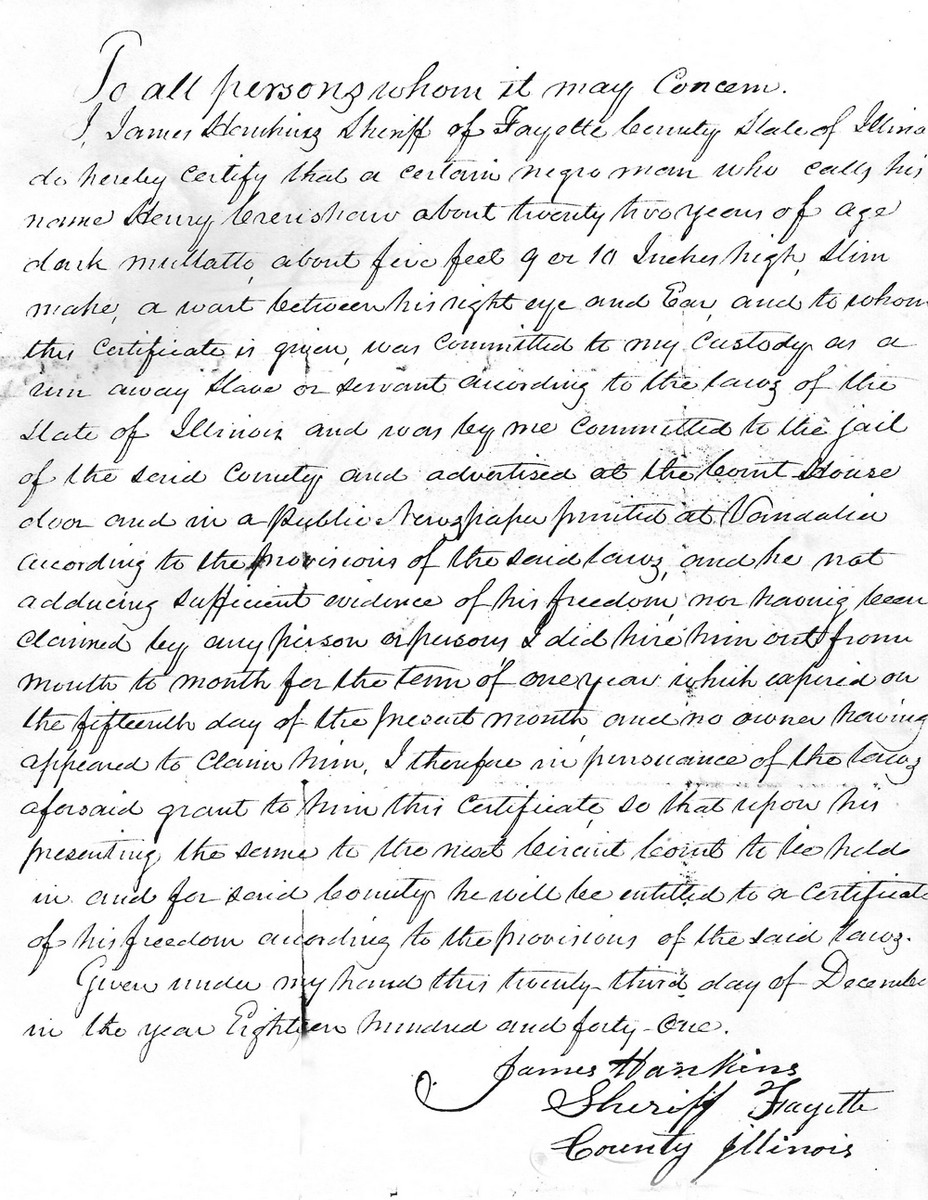