“It makes it all worthwhile when I see a kid smile like that.”

That’s what David Dugan said after he helped fit a Vandalia Elementary School student with a new winter coat and pair of shoes.
Dugan is a member of the Methodist Men at First United Methodist Church in Vandalia, which for almost a quarter of a century has been providing new coats and shoes for children of all ages in Fayette County schools.
This year, the Methodist Men handed out coats and shoes for about 325 children in schools in Vandalia, Ramsey, Brownstown and St. Elmo, according to Jeff Endres of the group.
It is a project that got its start about 25 years ago, Endres said, when Glen “Whitey” Daniels and “Pete” Burnam of the Methodist Men headed up the purchase of coats and shoes for just a few students at Jefferson Primary School in Vandalia.
And it continued to just expand from there, Endres said. “It was a very small project in the beginning.”
This year, the Methodist Men spent about $6,000 on coats and shoes, as well as socks and gloves, he said.
The amount spent each year varies, depending on the number of requests it receives and the number of items it has left over from previous years, Endres said.
The leftover items are packed up and stored until the next year, with Endres, who has been involved in the project with his wife, Deb, for about 15 years and has helped coordinate it for about five years, keeps out one item of every size.
That’s because the Methodist Men often receive requests for coats and shoes over the winter.
The group has given out as many as 400 coats and shoes in one year, and spent close to $10,000 one year, when its leftover surplus was low.
The money for the project comes from two Methodist Men fundraisers, a pancake and sausage supper, and its annual fish fry, the latter of which is the main fundraiser.
It also receives donations from businesses and individuals, and some people ask for memorial donations upon the death of a family member, Endres said.
The Methodist Men go out to the schools in the county shortly before Christmas to fit the recipients. That marks the annual end of a lengthy process.
At the end of October or beginning of November, the group asks schools to provide lists of students who will receive coats and shoes.
Then, in December, members begin the work of filling out those requests, sorting, wrapping and tagging each package, with the wives of some members assisting.
“December is a busy month,” Endres said. “The last two weeks, I am concentrating on that alone.”
But, actually, the work begins long before the first of November. In fact, it begins right after one year’s distribution is completed.
“It’s not just one month,” Endres said. “It’s year-round.”
“I buy stuff year-round,” he said, explaining that he even makes some purchases when he and Deb go to Florida in winter months.
“When I shop, I find myself gravitating to the shoe department, to see what sales there are,” he said.
“You’ve got to be a frugal, aggressive shopper,” Endres said.
The purchase of items ramps up in the fall, with some purchases made when discounts are big during Black Friday sales.
In fact, one of their sources has had the same employees and manager handling the Methodist Men in recent years, “and they are waiting for us,” Endres said.
Were it not for sales, discounts and good deals, he said, “There is no way we would be able to do this every year.”
The reason that Endres and the other Methodist Men do all of this work is simple.
“I think that if you ask any of the guys, they will tell you that it’s really rewarding when you see the looks on their faces when they put on the new coats and shoes, especially with the younger ones, and they thank you so much,” he said.
As Dugan said, that makes it all worthwhile. 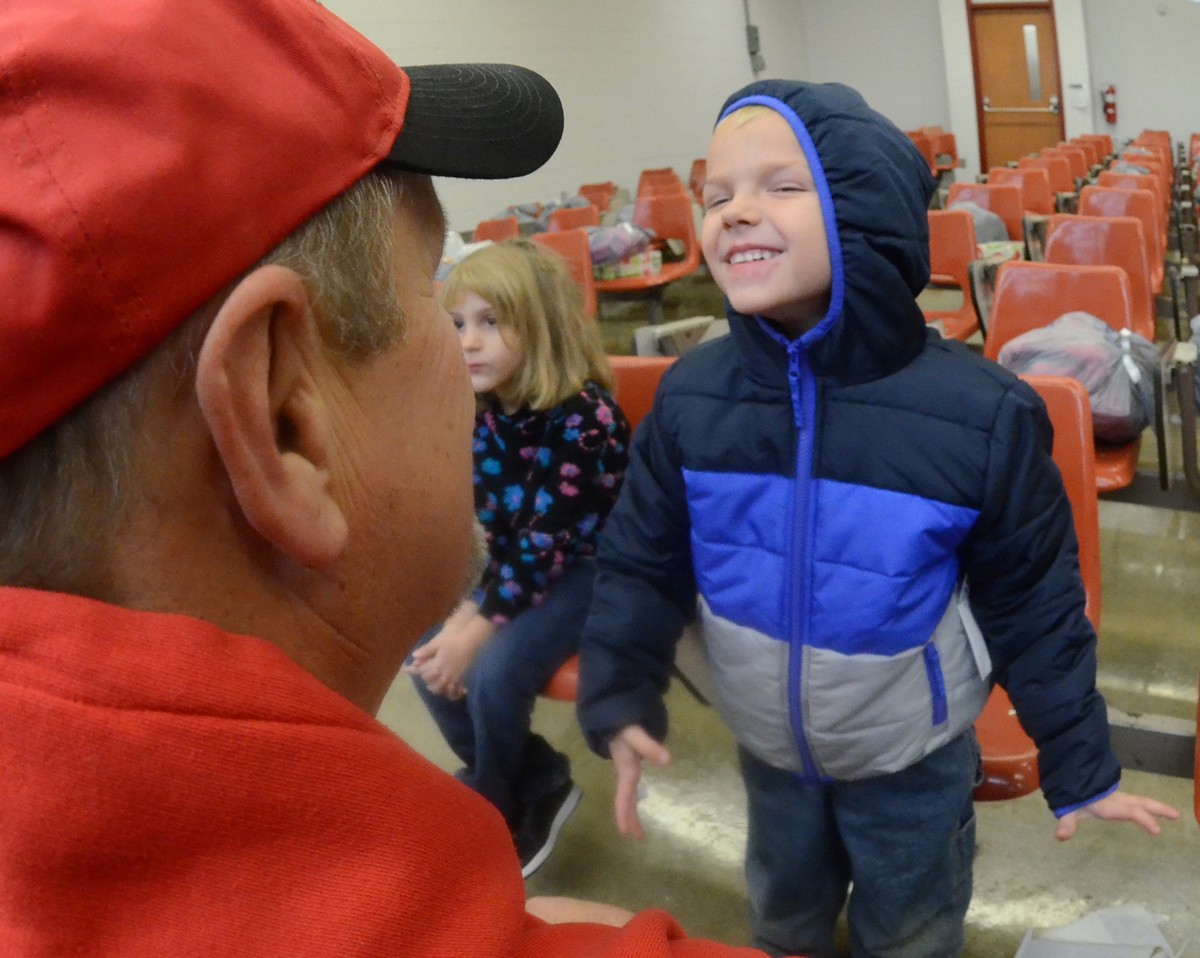 Vandalia Elementary School student Keaton Runkel beams with pride after receiving a new coat and shoes from David Dugan of the Methodist Men at First United Methodist Church in Vandalia. 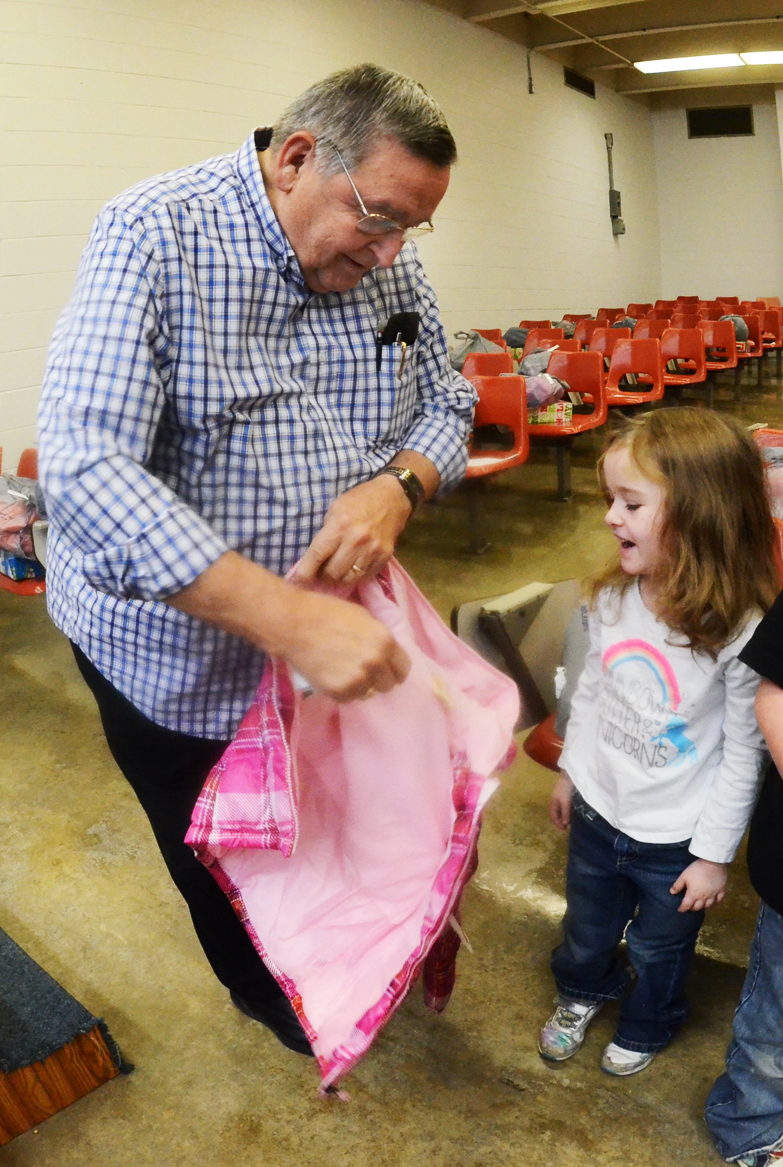 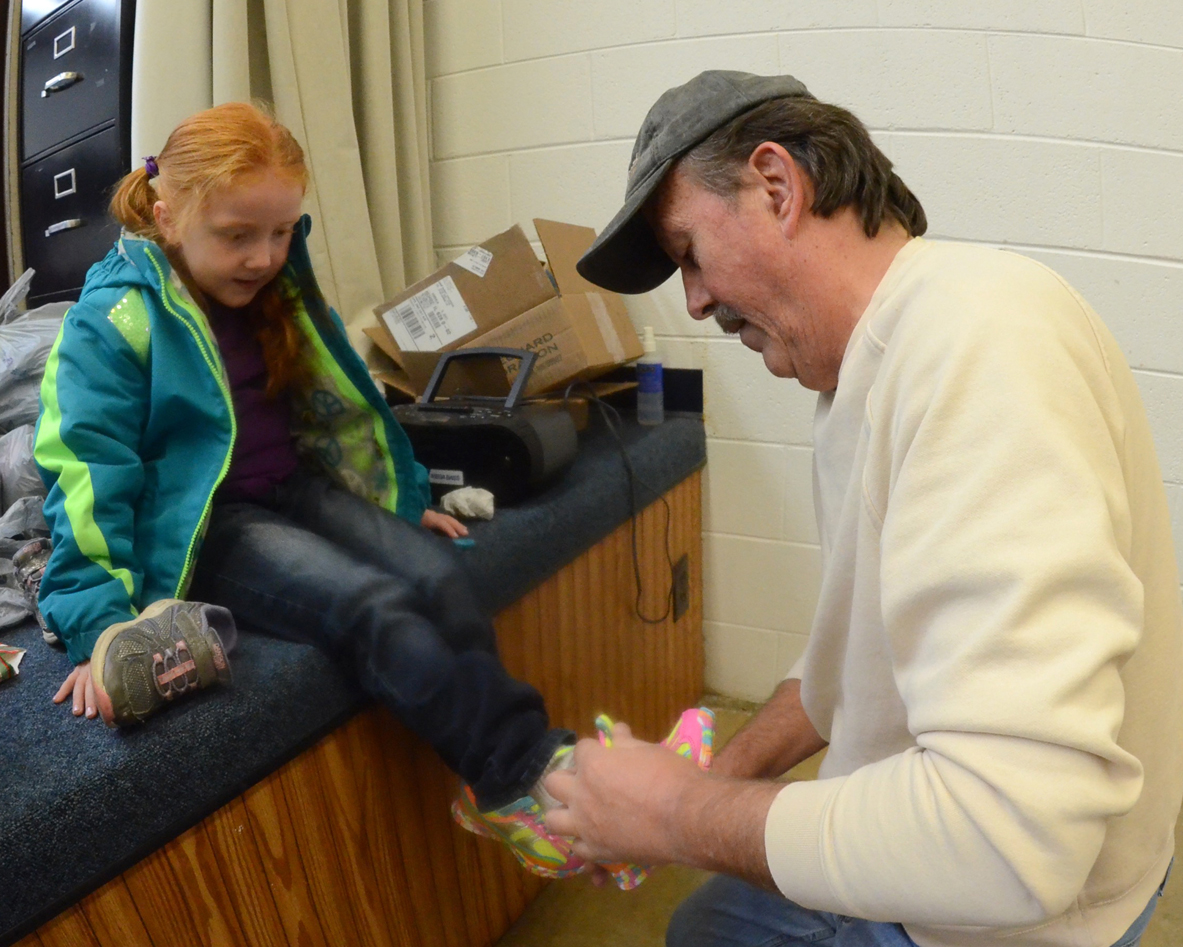