Four decades ago, the Fayette County Health Department initiated a program through which Christmas baskets were given to six less-fortunate families in the county. Today, that program continues to thrive on a much larger scale.

Fayette County Caring and Sharing provided Christmas baskets to about 475 families this year, according to Marlys Hayner, who has been involved in the program since its start.
“It just keeps going,” Hayner said. “People give so much.”
The donations continues to come through regular sources, such as donations of food from local schools and toys from the Mad Dogs Motorcycle Club.
And there always seems to be some new form of donation to the cause. This year, it was laundry soap given by the Woman’s Club.
“That was wonderful,” Hayner said. “Many of these families, all they ask for is laundry soap.
“It’s so humbling to see, families asking for socks, towels, dish rags … nothing expensive,” she said.
“They are very deserving people, and they are very grateful,” Hayner said.
Because of this year’s donations from the Mad Dogs, “We were way over the top on toys,” she said. “They went all out.”
She also noted the contribution of a Vandalia High School graduate who now lives in northwest Illinois. That Vandalia native began donating to Caring and Sharing a few years ago, “and each year, he adds what he does,” Hayner said.
This year, the anonymous donor, with help from other VCHS alumni, donated 200 units of food that included oatmeal, crackers, cocoa and soup. And each unit also included a blanket.
Once the donations are received, they have to be sorted into baskets. Hayner said that there are plenty of volunteers to handle that chore.
“On Monday (before the distribution), I bet there were a hundred people in here working,” she said. “It was like a beehive.”
“We were way ahead of schedule because we had so many volunteers,” Hayner said, noting that the workers included students from Vandalia’s junior high and high schools, as well as Alternative Education.
“For the first time, the students from Alternative Education got to sort toys, and they really enjoyed that.
“It’s like a puzzle – everybody knows their pieces and they just do it,” Hayner said.
“And we don’t have to call people – they just come,” she said.
“There are no words to express my thanks to everyone and to the good Lord above,” Hayner said.
“We were blessed beyond measure. The spirit of Christmas is truly in this town,” she said. 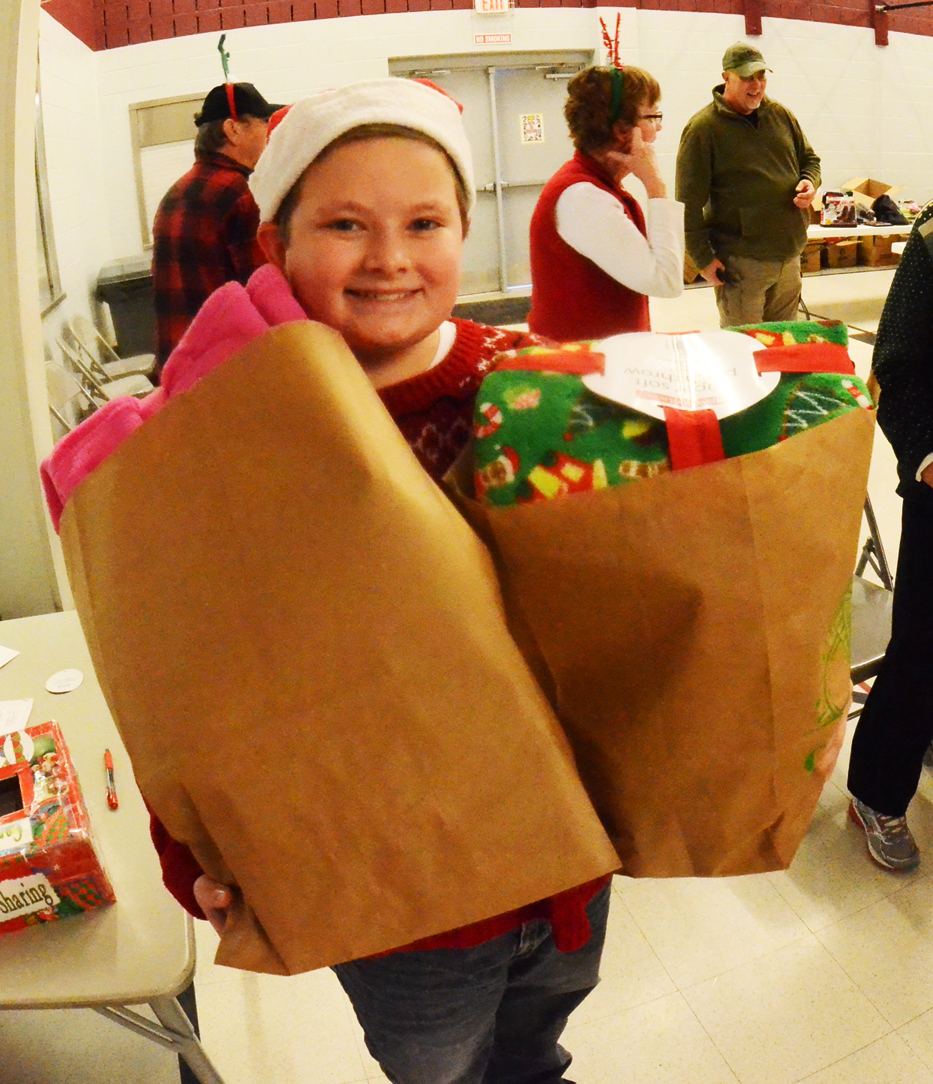 Ivan Daiber was among the volunteers helping families pick up their Caring and Sharing baskets. 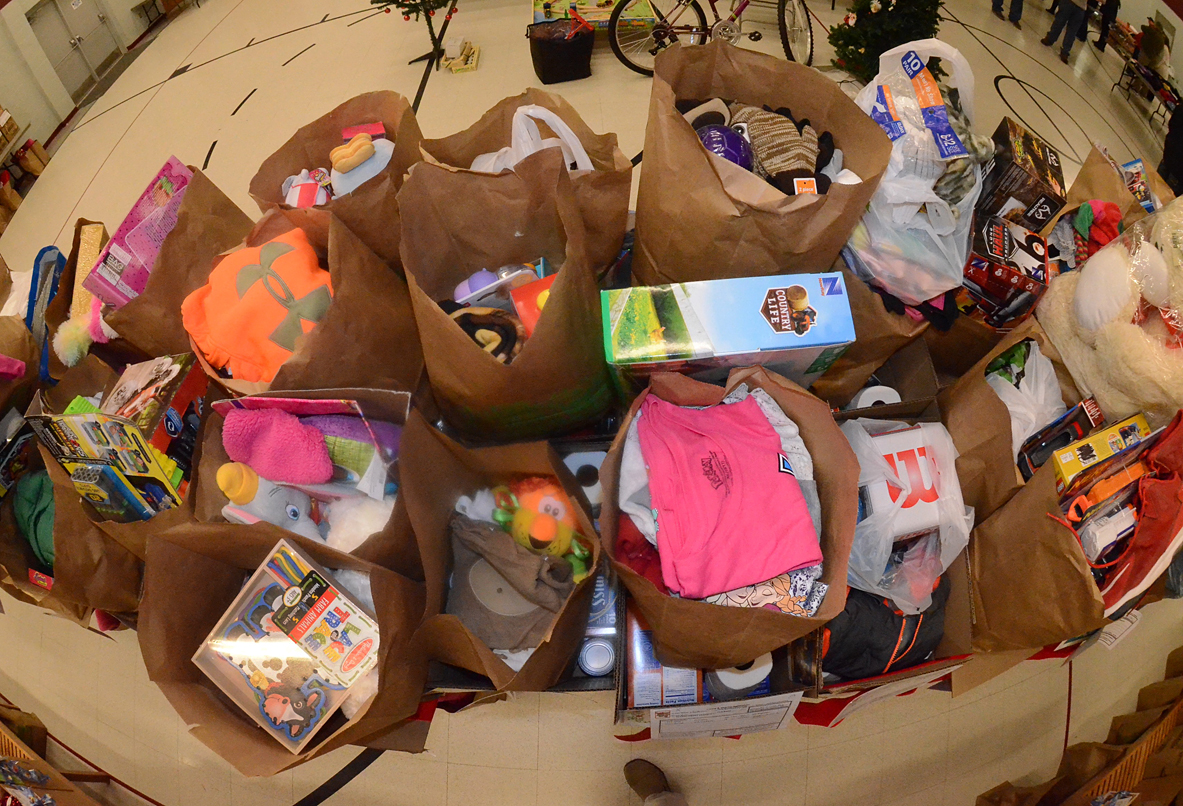 Some of the 192 baskets handed out in Vandalia. 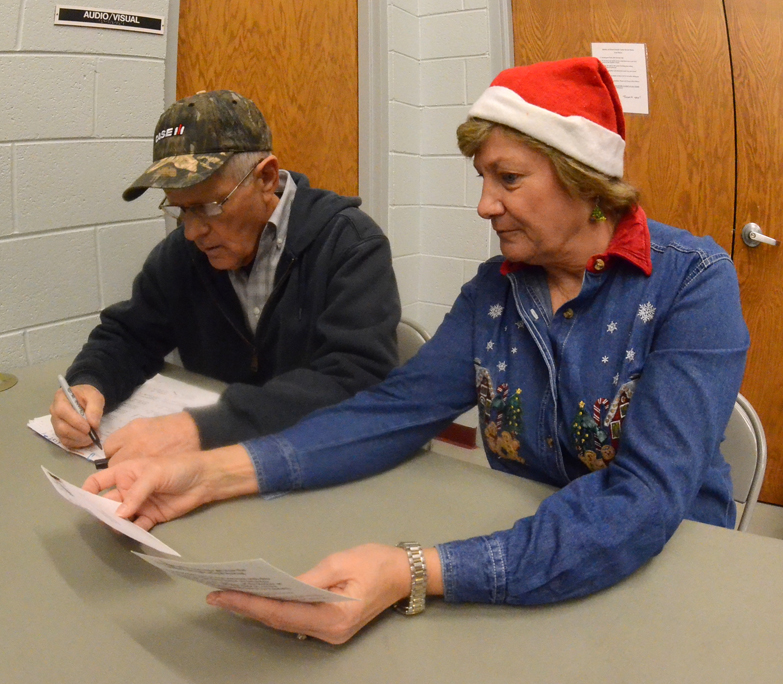 Dean Matzker and Risé Sahr check off families as they pick up baskets. 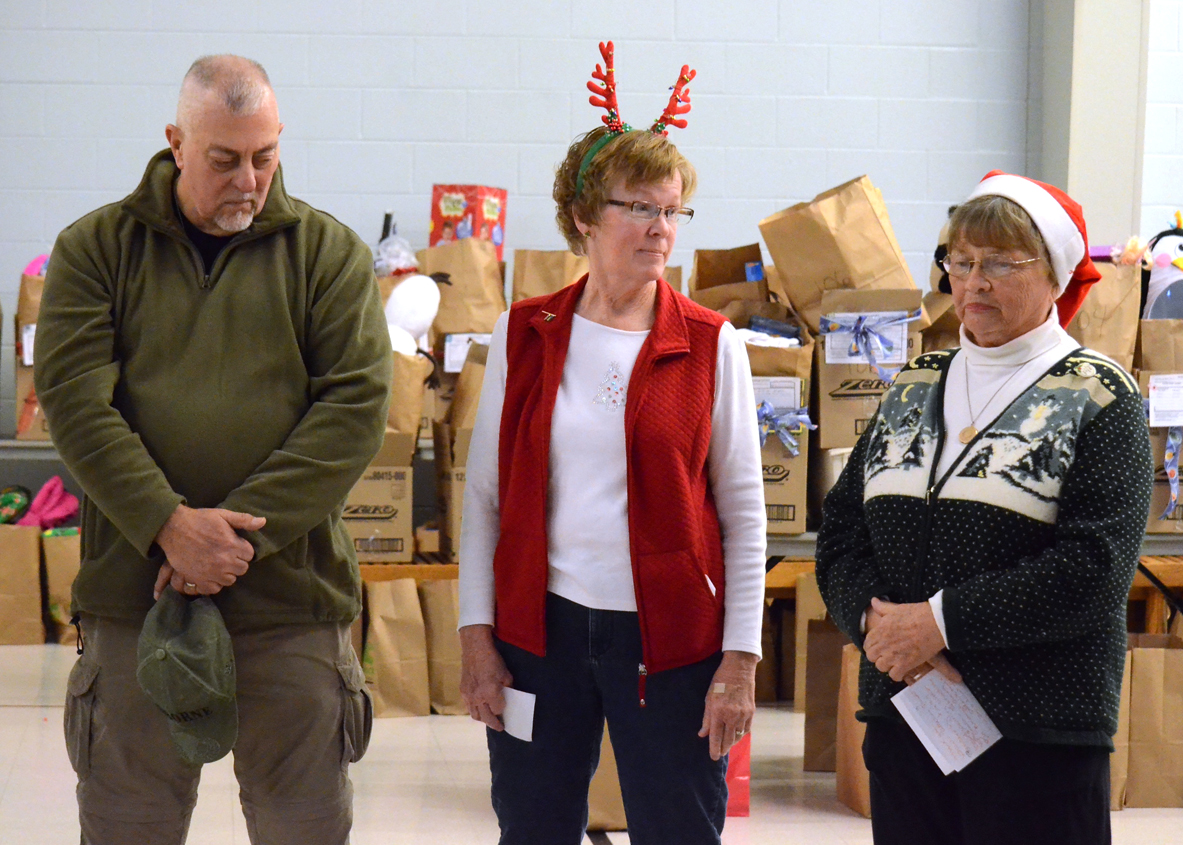 Marlys Hayner (right), who has been involved in Caring and Sharing since its start 40 years ago, addresses volunteers prior to this year’s distribution at the Mother of Dolors Parish Center in Vandalia. To her right are the Rev. Carl and Pat Rhodes. 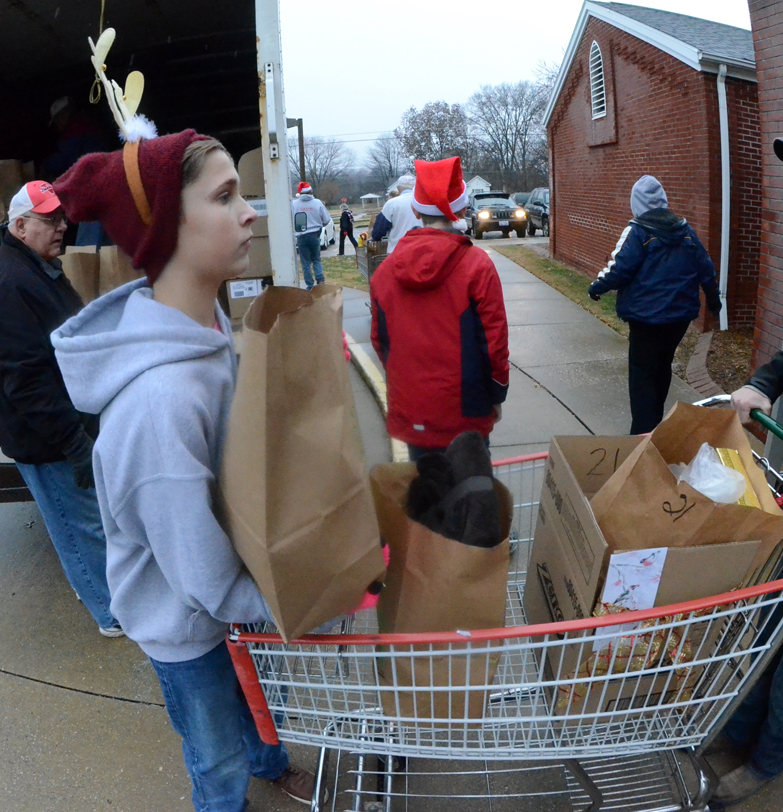 Noah Sasse was among the young volunteers at the Caring and Sharing Christmas basket distribution in Vandalia.