When Curtis Gordon began pole-vaulting, as a sixth-grader at Vandalia Junior High School, he did so competitively on a limited basis.

“We didn’t even have a runway or a mat here in Vandalia, so I did it only at away meets,” Gordon said.
“We went from not having mats to having state champions and runners-up,” he said about the VCHS track program.
Since that beginning in junior high, the Vandalia Community High School senior has continually raised the bar, both literally and figuratively, and on Tuesday, he rose to the next level, signing a national letter of intent to join the track and field program at the University of Illinois next year.
Gordon will enter his senior track season as the defending Class 1A state champion in the pole vault. The Decatur Herald & Review Area Track Athlete of the Year in 2015 also placed third in the hurdles last year at the state meet.
That state title was Gordon’s third. He placed first as a seventh-grader at 10 feet, then repeated as state champ the following year by vaulting 12 feet, 9 inches.
“I still have the record from my sixth-grade year, 7 feet, 3 inches,” he said, looking back.
At the start of the 2015 track season, Gordon had two goals – go 16 feet and attempt to break the state record.
“And that’s exactly what I did,” said Gordon, who came close to breaking the state mark of 16 feet, 3 inches on two of his three vaults.
With that record of success, Gordon had a number of offers, including some from other Division 1 schools. But, for him, it wasn’t a hard decision to make.
“Illinois was the school I really wanted to go to, so once they put an offer on the table, I didn’t really consider many other offers,” he said.
“It had everything I wanted – I knew the coach, the offer was good and they have a really good track team.
“They have a chance to win the Big 10 championship,” Gordon said. “My freshman year, they will have three or four Big 10 champions.
“I wanted to go far enough away so it didn’t seem like I was in my hometown, but also close enough to my family that I could come back home and my family could go to my meets,” he said.
“It was really a no-brainer to go to the Big 10 – it’s a huge conference,” Gordon said. “All of those things made it super easy to decide.”
Gordon will, obviously, concentrate on the pole vault at the University of Illinois … at least at the start.
Continuing to compete in the hurdles is also a possibility, something that probably would not have happened a few years ago.
“I didn’t really start taking the hurdles seriously until going into this past year,” Gordon said.
“It was kind of just a side event, something I could pick up points in,” he said. “I liked them and they were good for the (pole) vault, because speed training is always good, but then I realized that I could possibly bring home a (state) title in this.
At the U of I, Gordon will train with the hurdle group “and see where I’m at. And they will see how I perform my senior year.”
He knows that participating down the hurdles is not something that would happen from the start. “They have an All-American hurdler” who will be a senior in Gordon’s freshman year.
While he’s excited about participating in track at Illinois, it wasn’t just the athletics that lured Gordon to Champaign-Urbana.
“One thing that really separated the U of I was that they have so much of a support system for the athletes,” he said.
“They have tutors that travel with you, mandatory study hours where they get you tutors.
“The support you academically, athletically, socially … in everything you do.” 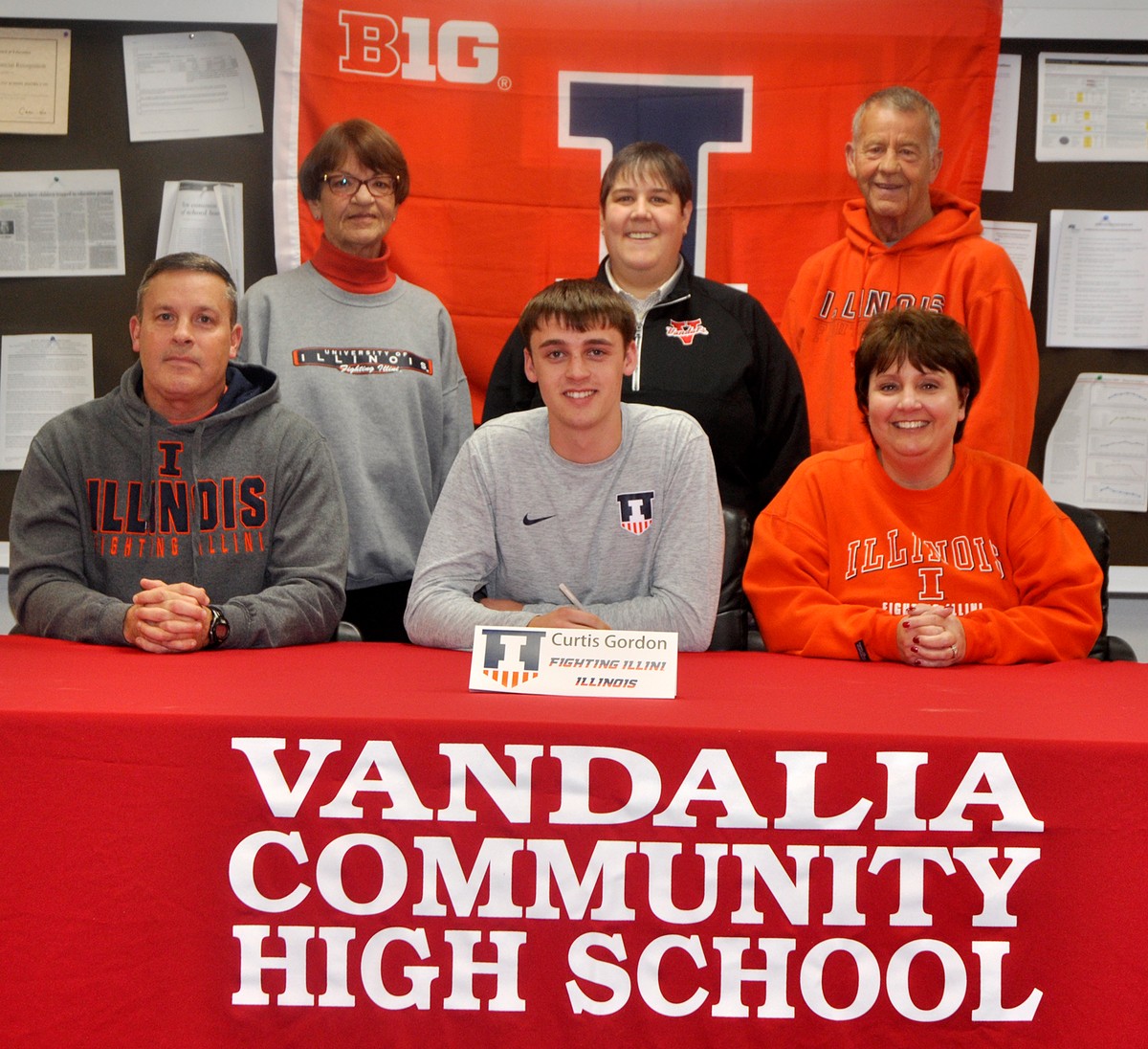 Curtis Gordon (seated, center) signed a national letter of intent on Tuesday to join the University of Illinois track and field team. He is flanked by his parents, Dan Gordon and Lori Gordon. In back are Gordon’s grandmother, VCHS track coach Erica Foltz and Gordon’s grandfather, Jack McNary.