I had the good fortune to meet Floyd “Pop” Miller and his wife, Vivian, of Mulberry Grove when I joined the Fayette County Genealogical Society in the late 1980s.

To mention the word “baseball” would start Floyd reminiscing about his early days with the Mulberry Grove team.
I sat down with Floyd and Vivian in July 1993 at their home north of Mulberry Grove to record his baseball memories. At the time, Floyd was between chemo treatments, but still eager to talk about old-time baseball.
Growing up, Floyd had a natural athletic ability. He was an only child and his father, Alvin, encouraged him, buying him a ball and glove. Floyd was a right-handed hitter and his dad threw an “awful” fastball, Floyd recalled. “I learned to catch, too – (he) set me on my tail.”
Floyd played ball in high school, and one game he remembered was at Hookdale. The Hookdale team had hired some talent, but the Mulberry Grove school boys beat them anyway, 3-0.
It was a common tactic to spike a player to get him out of a game. Floyd was spiked in the leg during that Hookdale game and still bore the scars from it.
This wasn’t exhibition baseball, he said; it was competitive and tough. The young players soon learned how rough it was. He smiled as he remembered not taking a base he should have so that he could return the favor to the guy who spiked him.
Floyd showed me a photo of him in the Mulberry school uniform of blue shirt with yellow trim and gray pants.
Several local players went on to the big leagues. Red Schoendienst played for the Greenville CVC camp team, as did Eldon Aukins, a cross-arm pitcher who later played against Schoendienst in the 1944 World Series.
“Mark DeMoulin started the Mulberry Grove ball team and was the manager when I started playing in 1939,” Floyd said. “In later years, I became manager…and paid the expenses – mainly that’s what it (the job of a manager) was.”
In these early games, the ’30s and ’40s, the home team always provided the ball and each team brought their bats and catcher’s equipment, if they had any; many didn’t and would borrow from the other team.
“Pop” was the pitcher. One game he played in at Shobonier made “Ripley’s Believe It or Not” for being the shortest baseball game on record.  The home team, Shobonier, was to supply the ball and they brought one. The first Mulberry Grove batter hit the ball so hard they were unable to find it. Because they didn’t have another ball, the game ended right there – 1-0; the shortest on record.
Some of the ball players Floyd remembered from those early days were: “Strawberry” Boggs, a pitcher; Bill Willett, catcher; Jack Meseke at Vernon; Martin “Hog-Jaw” Meyer; Vern Davidson, a left-handed hitter from Vernon; and Sonny Connor, Carl DeMoulin, Joe DeMoulin and Harder and Laws from Keyesport.
The Mulberry Grove team played most of the neighboring towns. In Vandalia, the ball diamond was located in the general area of Aldi’s and McDonald’s. Floyd remembered Vandalia men Chick Wilson, Delmar Cook and manager Cliff Tedrick as being involved on the local scene.
Vandalia had three teams – Shoe Factory, Lions and Merchants. Floyd told of one day when he was in Vandalia to watch the game between the Vandalia Merchants team and St. Louis Colored Giants.
The Vandalia manager, Tedrick, came up to him and asked he had his suit with him. “Pop” always traveled with his baseball gear and suited up to play for a team he generally played against.
Baseball went on a kind of hiatus during World War II, with many of the players joining the service. After the boys began to return to Mulberry Grove, “Pop” had a ball diamond built on his farm north of town. From 1946-48, the team played on this diamond and it was common for local fans to pile into a farm truck and attend the out-of-town games.
The 1947 team roster included: Bonney Ward, third base; Dean ???, pitcher; “Pop” Miller, first base; Raymond and Gabby Koontz, catchers; Mervin Henderson, second base; DeWitt Heather, shortstop; Junior Beasley, right field; Gene Dothager, centerfield; and Jerry Papes, left field. Their record was 32 wins, 2 losses.
In addition to playing ball, Floyd had another connection to baseball.
His father, Alvin, trained hunting dogs, and many of the big-league players owned dogs. One of those was Bill McKechnie, manager of the Boston Braves, 1935-38.
May 30, 1935, was a day that Floyd would remember the rest of his life. On that day, Floyd and his father were guests of McKechnie in a box surrounded by Hall of Famers and other professionals. It turned out to be the day “Babe” Ruth played his last game. 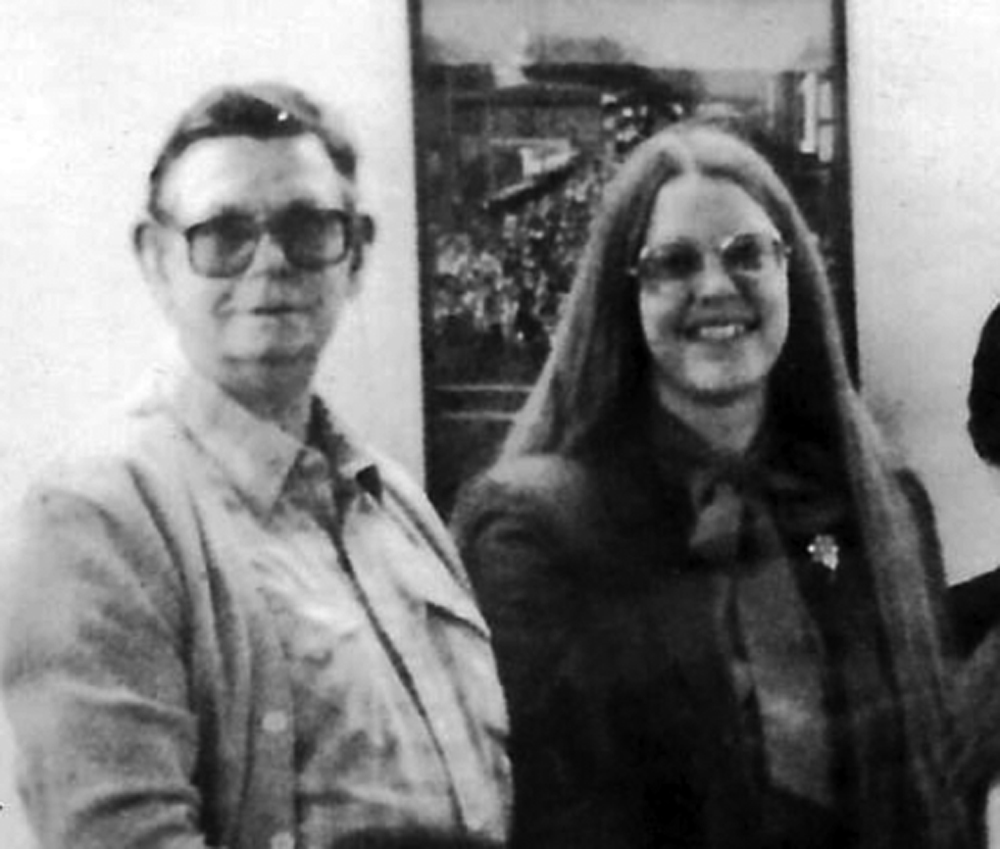 Floyd ‘Pop’ Miller and Linda Hanabarger are pictured in 1989, as officers of the Fayette County Genealogical Society.