Embedded in the floor of the gazebo at the Rogier Park on West Fillmore Street in Vandalia is a plaque bearing the words: “Success lies in what we do for others.” Those are seemly appropriate words so near the site of the Fayette County Cancer Fund's “Party in the Park,” a fundraiser to help cancer patients fight their battles against the disease.

The Fayette County Cancer Fund is a newly formed organization, one dedicated to raising and providing funds to help Fayette County people who have  cancer, to give them the financial assistance with the extra added burdens that cancer can bring.
When several local, concerned individuals recognized a need for a fund to be used by Fayette County residents battling cancer, they met with Liz Heizmann at First National Bank in Vandalia and proceeded to set into motion such a fund.
With Heinzmann serving as consultant, and John Goldsmith of FNB assisting her with copies of paperwork that Greenville is currently using for its cancer fund, and the decision to start a fund under the Old Capitol Foundation (due to the expense of starting a 501 3 C account), the work was under way.
As the Fayette County Cancer Fund was established, meetings were held, officers were appointed and the Fayette County Cancer Fund Board of eight members was formed.
The officers are: Doug Knebel, president; Darryl Tjaden, vice president; Janet Elam-secretary; and Fran Rickman-treasurer.
The other board members are Daisy Hipsher (in charge of luminaria); Liz Heinzmann (consultant) and Lori Sasse (in charge of fund raising).
Some of the members are cancer survivors and some have lost family members – all have been touched by cancer in some way. They all know the burdens and demands on the lives of cancer patients and their families and friends.
The Purpose
The desire of the board is to help cancer patients of Fayette County with the added burdens and expenses caused by cancer. Some of the ways they are currently helping include providing gas and food cards. To date, they have helped seven patients; their desire is for everyone to receive the help they need.
The Way to Receive Help
Those needing assistance can pick up a brochure, fill it out, have their doctor sign it and return it to them: Fayette County Cancer Fund, P.O. Box 84, Vandalia, Ill., 62471. Brochures can be picked up from several locations, including doctor offices, the second floor of Fayette County Hospital, Vandalia City Hall and First National Bank.
And Funds are needed
The board, along with other volunteers, has already been at work to finance its goals of helping cancer patients.
On Saturday, Aug. 6, they held a golf scramble at Ramsey Lake Golf Course. Thirteen teams had fun playing 18 holes, and a cookout was held after the golf outing. More than $3,000 was raised from hole sponsorship, entry fees and a 50/50 drawing.
Brock Doehring won $87 from the 50/50 drawing and donated it back. Kirk Doehring’s team won the tournament and donated the $200 prize money back  to the cancer fund.
The weather, reportedly, was wonderful, and it was a great day of food and fun … all for the cancer fund.
“Party in the Park”
The Fayette County Cancer Fund is now having a “Party in the Park,” from 6-9 p.m. this Saturday in Rogier Park in Vandalia, on the top loop of the Lincoln Loop Walking Path.
They will open with a survivor lap at 6 p.m., and all local cancer survivors are encouraged to participate. Dean Black will give the survivor talk.
The drawing for a quilt will be between 7:30 and 8 p.m., and a DJ will provide music during that period.
The “FourGiven” quartet will be performing from 6-8 pm., and Jamie Nattier from Patoka will performing his music from 7:30-9 p.m.
The luminary service with the Rev. Robert Weaver will be at 9 p.m. Luminaria bags, $5 each, may be purchased ahead of time or at the park until 8 p.m. A PowerPoint presentation follow the pastor’s talk.
Lemonade shake-ups, water and funnel cakes will be available for purchase at the park. 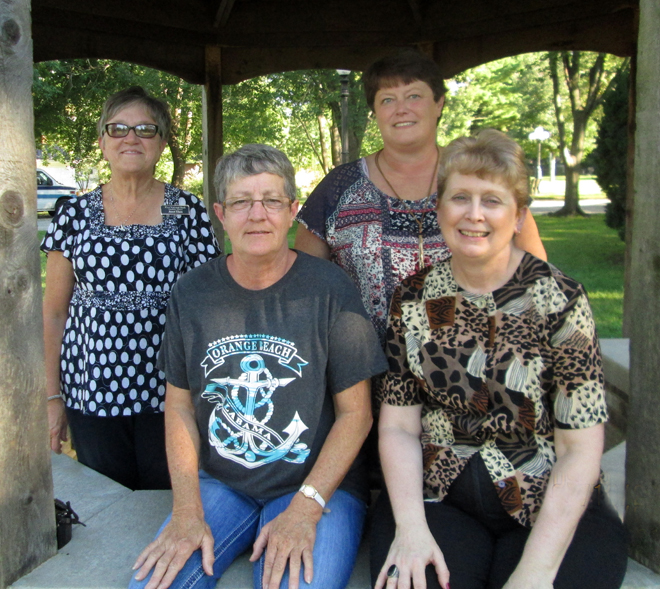 Four members of the Fayette County Cancer Fund are shown in the gazebo at Rogier Park in Vandalia, the site of the first ‘Party in the Park.’ In front, from left, are Daisy Hipsher and Fran Rickman. In back are Janet Elam and Liz Heinzmann.