My sister died Saturday morning at about 3 o’clock. After receiving the call and being unable to sleep, I began to think that I really didn’t know her that well.

I was 14 when Sandy left home in 1966 after marrying a Navy man, and was whisked away in a little red MG to Brunswick, Ga., where his career would become her life.
In 2006, divorced and bearing the marks of a massive stroke that took not only her mobility, sight and career, Sandy returned to Vandalia.
Sandy was 4 1/2 years older than me and that led to a sort-of hero worship on my part. Sandy was a pretty girl and had boyfriends, wore pump heels, nylon stockings and makeup, and I wanted to be her.
Thinking back, Sandy was a leader and when she was in high school was one of the top trumpet players who earned the heralding trumpet chair. At church, she was president of our youth group, the Walther League.
Most of what I learned about Sandy was after she returned to Vandalia in 2006 and we had the chance to be sisters again.
Even before graduating from Vandalia Community High School in 1965, she was a waitress at Mabry’s Restaurant, which was the Vandalia and Greyhound bus stop in those days. The waitresses wore white uniforms with cute little aprons, and the tips poured in.
There, she met James Woodrow “Zeke” Sampson, home on leave. A Navy “lifer,” Jim had already been in the service for 12 years, having lied about his age when he enlisted. When they married in April 1966, they lived in Brunswick, Ga., where, thankfully, Jim had an aunt, so Sandy was not all alone.
It was also here that she adapted to the Southern accent that never left. In fact, in the early years, when she would call home we would gather around the telephone just to hear her Southern drawl.
Her first son, James Michael ,was born in Brunswick, Ga., with a second son, David Mitchell following three years later, in 1972. The family was shipped to Naval Air Station Roosevelt Roads in Puerto Rico, and there she was faced with tropical storms and hurricanes.
To protect the multi-million dollar helicopters and airplanes Jim, a petty officer, would be shipped out with them to the mainland and safety, leaving Sandy with two little children in a block house with metal shutters. I asked how she dealt with it, and she said, ‘Oh, the kids cried, and I cried right along with them.”
Sandy and Jim were able to visit Vandalia from time to time, but with their overseas postings, sometimes it was a couple of years between these visits. One year, it snowed while they were here and the boys who had never seen or touched this wintry wonder had an experience of a lifetime.
I remember my mom including two pieces of chewing gum in her letters to Sandy and after that, she became known as the “chewing gum grandma.”
Their next posting was in NAS Catania, Sicily, and they chose to live 25 miles from the base in the village of Mode St. Anastasia, a town of 11,000-12,000.
Located at the base of Mt. Etna, the family was forced to flee their home in a three-story walk up on several occasions. One time, they lived in a field for three days with other residents while the ground shook.
Moving back to Pensacola, Fla., after Jim retired from the Navy, the family settled in this Navy town. Jim, being a helicopter mechanic, continued to work on base, and Sandy put action to a long-held dream and at age 37 entered a nursing program at Pensacola Community College.
Completing the LPN program, she immediately registered for a fast-track intensive program earning her registered nursing degree.
After graduation, she worked in the cardiology department at the local hospital. Being in a hurricane area, once on duty, if a hurricane threatened staff, you were not allowed to leave as long as the threat lasted.
After several years she changed to home health care. The AIDS epidemic was raging, and many of her patients were suffering from this immune disease.
Both of her sons attended ROTC classes while enrolled in high school, and her eldest, James Michael, joined the Army. His first Christmas away from home was spent on an Army base in Germany.
This particular Christmas, she purchased a 3-foot pre-lit and decorated tree, and mailed it to him.
The men were in their barracks consoling each other when their commanding officer came to the door and ordered then to attention. He then ordered them to assemble in the meeting room.
Once there, it was to find Christmas music playing and Sandy’s tree on a table, stripped of lights and ornaments. The soldiers redecorated the tree and sang Christmas carols, and their somber mood soon left all because of a caring military mother who had been there.
In February 1990, after being accepted for study at Florida State University, Sandy’s youngest son, David, died at his home in Pensacola. At this time, Sandy had remarried and was living in Ashdown, Ark., where she was the nursing supervisor at Little River Nursing Home.
Five years later she suffered a massive stroke, and her family knows how hard she fought to regain her speech, to walk again and get back to life.
As I look back over these lines I find that without realizing it, I knew more about my sister, Sandy, than I thought. 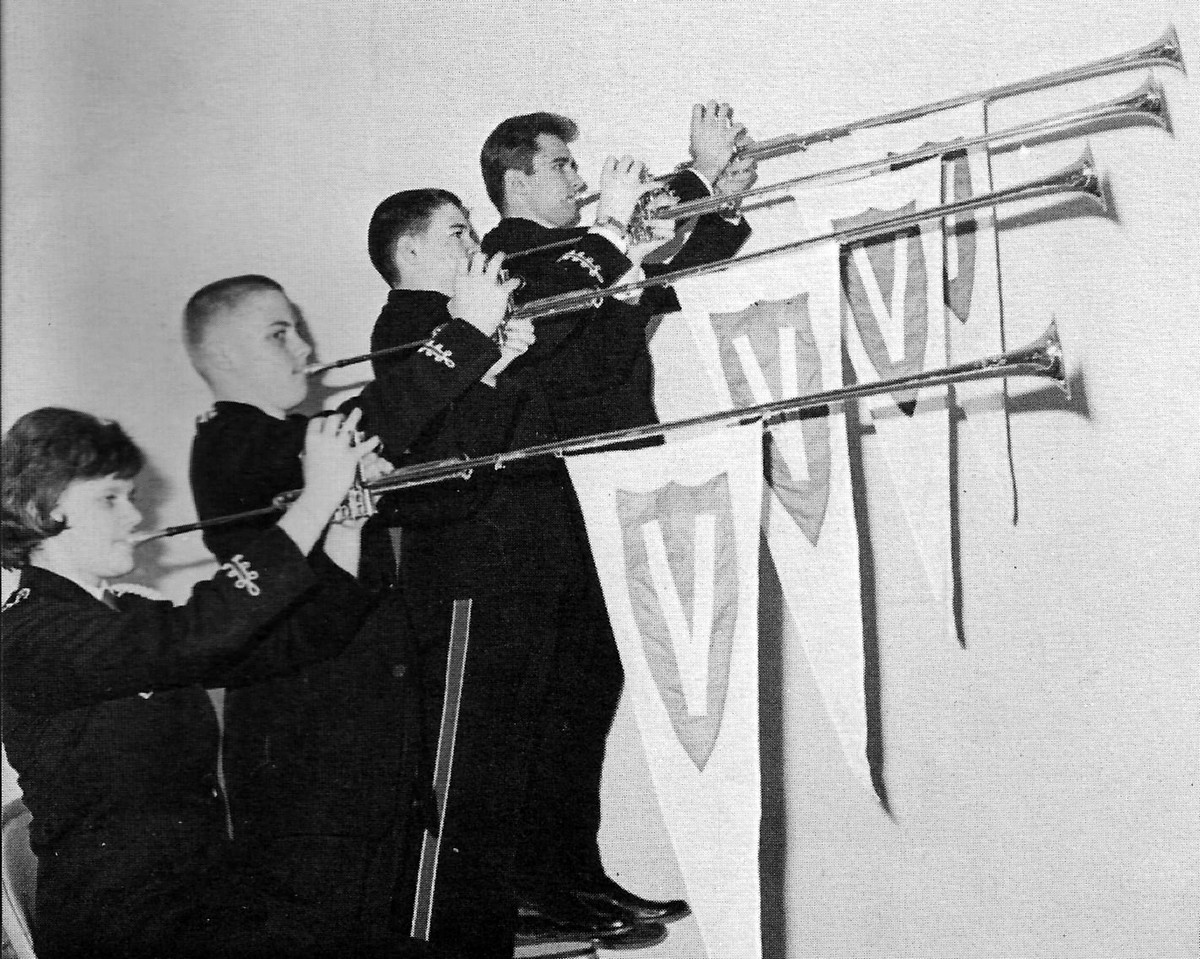 My sister, Sandy, was part of the heralding trumpets at Vandalia Community High School, as pictured in the 1964 Vandalois.