The Vandalia Community High School varsity football team opened its season Friday night, using a second-half surge to defeat conference foe Gillespie, 15-14.
The Vandals offense struggled much of the first half, with Richie Well delivering an interception on the Vandals first offensive drive of the game.
A holding call on the second drive led to a three.-and-out on Vandalia’s second offensive possession.
Despite the Vandals offensive struggles, the defense held strong throughout the first half to keep the game close.
Vandalia squandered its best offensive threat early in the second quarter, failing to put any points on the board after driving down inside the Gillespie 10-yard line, with a field-goal attempt missing wide right.
Clay attributed the first half offensive struggles to his play calling, not taking what the Miners were giving them defensively.
“We moved the ball a little bit in the first half, but we didn’t move it like I want to,” Clay said. “It’s probably a little bit on me getting adjusted to calling plays. Thankfully, our defense kept us in it.
“I was trying to force something that wasn’t there instead of what they were giving us. In the second half,” he said, “I felt like we were taking what they were giving us and we were ripping off big chunks of yardage.
“That’s just me learning as a play caller. I think the kids were doing a good job the whole time.”
The Miners took a lead late in the second quarter, driving from their own 20 and punching it in on a 2-yard quarterback sneak to take a 6-0 lead after a missed PAT at the 4:55 mark.
The Vandals were able to drive into Gillespie territory right before halftime, but were forced to punt once again as they went into the half trailing, 6-0.
Gillespie added onto its lead early in the third quarter after Vandalia squandered its first possession of the half, driving 78 yards for its second score of the game to take a 12-0 lead with 3:17 left in the third.
Trailing by two possessions, Vandalia finally sparked some offense, with sophomore Trevor Smalls leading the way. Smalls kicked off the drive with an 18-yard carry, followed by 18-yard reception by Zimmerman to push the Vandals into Miner territory.
Smalls capped off the 4-play, 1:28 drive with another hard run, breaking multiple tackles en route to a 28-yard touchdown run. Well converted on the PAT as the Vandals cut the deficit to 12-7, with 1:37 in the third quarter.
Vandalia’s defense kept the momentum going, forcing a quick three-and-out on the ensuing Miner possession. Deep in their own territory, the Miners delivered a weak punt to set the Vandals up on their 25-yard line.
The Vandals capitalized on a fourth-and-goal facemask call, with Richie Well scoring on a 1-yard sneak the following play. Well followed up with a completion to Preston Ruckman for the two-point conversion as the Vandals took the lead, 15-12.
The three-point lead would prove to be crucial, as the Miners took Marcus Zimmerman down in the end zone for a safety on a failed sweep play with 5:31 left to play.
“It was kind of a dumb play call,” Clay said. “It was there; we missed a block, but probably not the right spot to call it. I think we were one block away from a big play, but that’s live and learn.”
Back-to-back sacks quickly ended the Miners next offensive possession, allowing Vandalia to run the clock down under a minute for the Miners final offensive possession.
A key sack from Rilley Smock helped ice the game, as Vandalia was able to hold on for the win, 15-14.
The Vandals pass rush was effective all night, finishing the game with four sacks, something Clay attributed to winning the battle on first downs.
“I think our guys get after the passer pretty well,” Clay said. “One of the things is, we started winning first down and putting them behind the chains and they were being more predictable.”
Clay attributed the second half turnaround to some key adjustments, praising his kids ability to stay tough throughout.
“At halftime, coach (Eric) Lux and coach (Matt) Shroyer helped with some adjustments and we got into some good situations and pulling off some chunks,” Clay said. “It’s learning and, luckily, our kids gave us a chance. We made some adjustments and I think we wore them out a little bit.
“Our kids worked really hard and we had a lot kids going both ways and we didn’t have a lot of people asking out, which is a testament to our kids,” Clay said. “They care, they’re tough and we have talked about getting tougher each day.
“It’s not strutting around like your tough, but doing the tough things at the tough times.”
Clay talked about his team's struggle with penalties, something he knows they will have to improve upon going forward.
“We had a lot of penalties,” Clay said. “We will have to clean that up going into next week, but I told the kids, ‘We are going to make mistakes. No one has ever played a flawless football game.’
The Vandals will face a tough task in week two, hosting Carlinville, who is coming off a playoff season, a team Clay does not take lightly.
“You have to watch the film because usually the biggest jump is week one to week two,” Clay said. “We need to find out if we have some personal moves we need to make to give us a better chance to look at some kids.
“Carlinville is highly touted, and rightfully so,” he said. “They have a lot of seniors back off a playoff team. They are going to be fired up because we went up there last year and I think they kind of under estimated us a little bit.
“I guarantee they won't do that (next week). They will come in fired up and ready to knock us off.” 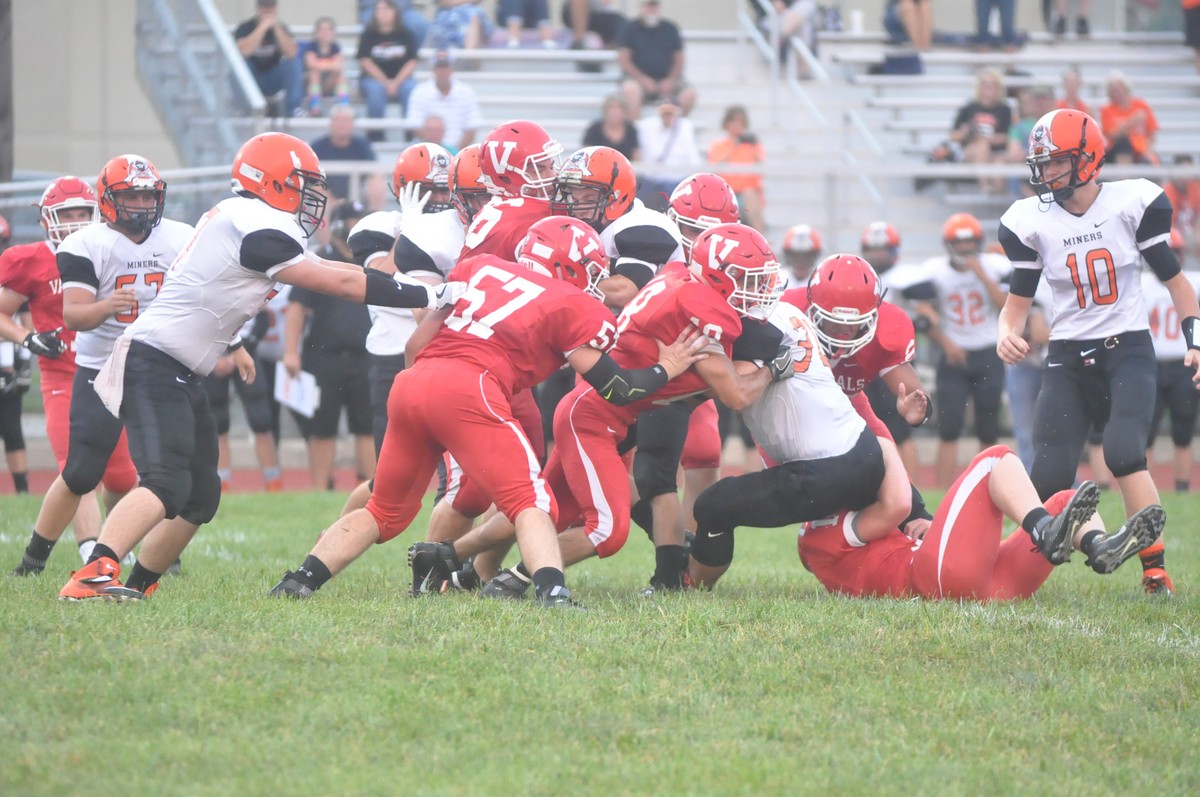 Logan Sullens wraps up a Gillespie runner for a tackle Friday night, with Richie Well (right) coming in to help. 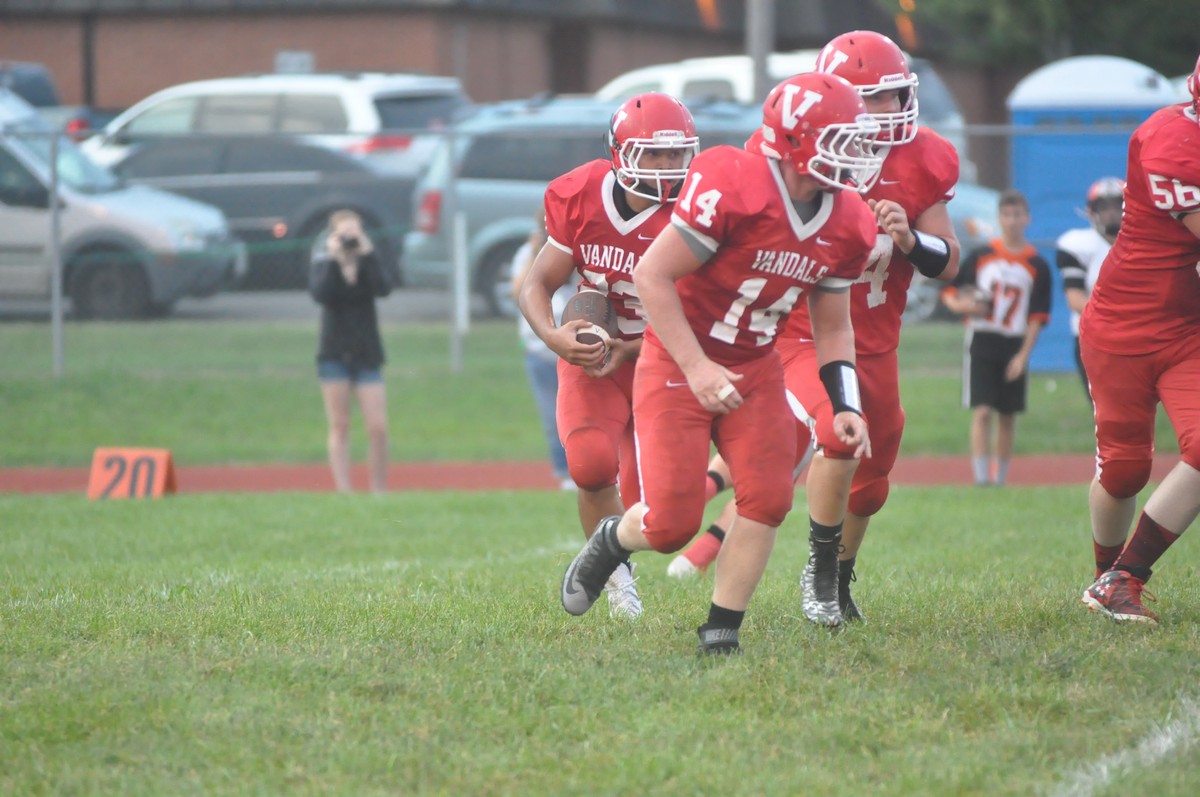