Recent Vandalia Community High School graduate Jalea Paslay culminated her final season of track with a 12th-place showing in the 800-meter run at the IHSA Class A state track meet this May.
However, the state meet was not the end of her track career
Unsure of whether she was going to run track in college, Paslay recently made the decision to not only continue her track career at Southern Illinois University-Edwardsville, but also cross country, something she hadn't planned.
“I mainly just went to talk with the coaches about doing track,” Paslay said. “But I mentioned that I did cross-country and then I was in mid-distance, so they figured that it would help me in the long run and help their cross country team, as well.”
With Paslay’s best event being the 800-meter run and some previous cross-country experience, SIUE insisted that she join cross-country team, as well.
“Basically I put myself out to them and then just explained my story,” Paslay said. “They were like, ‘Oh if you are this good distance runner (you should do cross-country, too).’ I told them my times and how I’ve done cross-country and was by myself, and they knew it would help me to be better in track.”
While VCHS doesn’t have a cross-country team, Paslay ran with just one other student her sophomore year, a sport she said she didn’t immediately love.
“My sophomore year I did it. It was only me and another boy at the time and I didn’t enjoy it at first, but I am looking forward to actually running with a team and not just by myself.”
Paslay had undoubtedly her best performance on the track team her senior season, setting a school record for the 800-meter run with a time of 2:23.06, qualifying her for a spot at state.
Her senior season success didn’t come as a relative surprise to her, but continuing her career past high school was something she hadn’t seriously considered until receiving some interest after the state meet.
“I expected to do as well as possible my senior year, but I didn’t think I’d actually end up running in college,” Paslay said. “It never really went through my mind at first, and then I had a couple colleges come up to me at the state meet and I was like, ‘Oh, people actually want me.’”
Despite not receiving any interest from SIUE after the state track meet, Paslay reached out to them and was happily accepted on to both the cross-country and track teams.
“I just wanted to stick with Edwardsville, so I reached out to them, and they’re really excited to have me,” Paslay said. “I have always wanted to go there, and then, at the end of the state meet, Murray State actually came up to me and really wanted me to be on their track team.
“But, I know that I would do better and excel faster at Edwardsville.”
Paslay will be busy year-round at SIUE with a full slate of athletics and academics, but that is not something new to her, having been involved in three sports throughout high school.
“I am hoping so (that my ability to balance school and athletics from high school translates to college),” Paslay said. “I have a full class schedule, but being in three sports all four years (of high school) just helps with time management and I think I’m ready for that next level of track and field.” 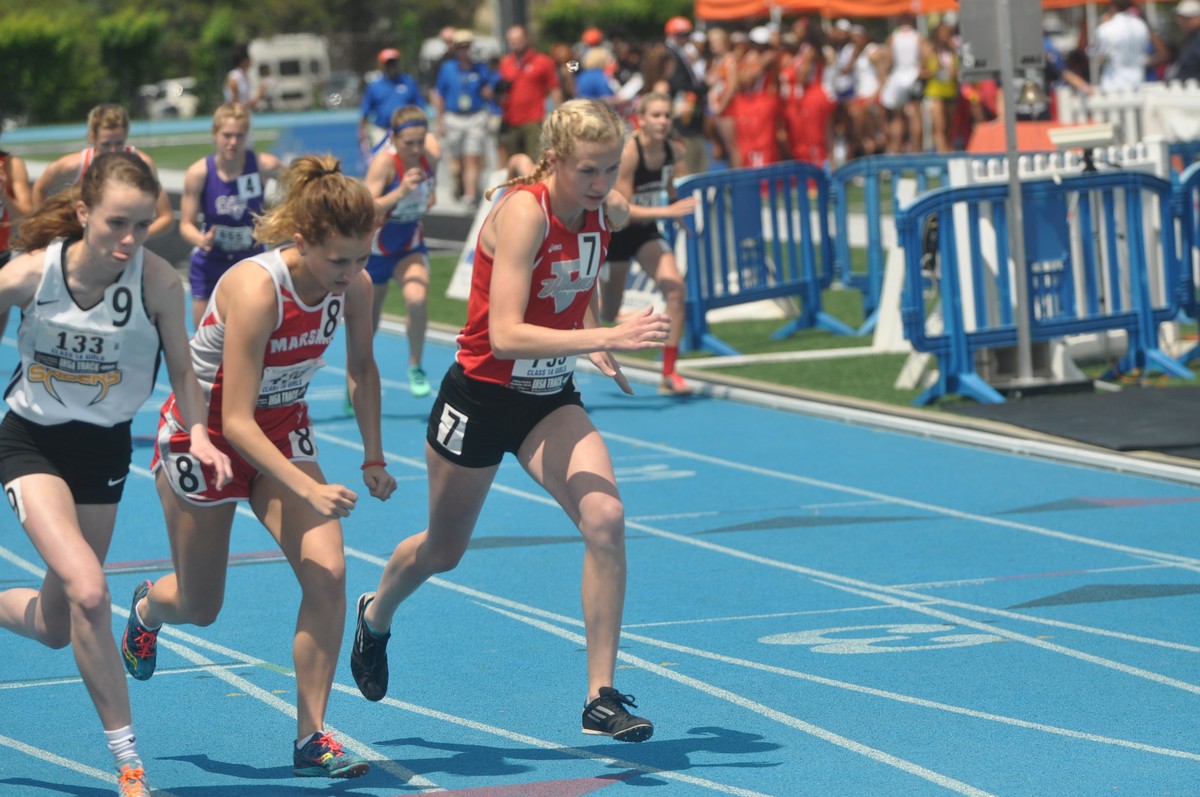 Jalea Paslay finished eighth overall in the 800-meter run at the IHSA Class A state trck meet this May.