The principal at the Mid-America Preparatory school in Herrick Rick Allen recently received high honors in a different career – umpiring.
Having umpired for eight years at the Division I college baseball level in the Big Ten, Missouri Valley, Big East and Summit Leagues Conferences, Allen was asked to be one of just 96 selected umpires to work the NCAA regionals.
Allen worked at the Mississippi State University regional from June 3-5, an experience he said was unlike any he’s had before.
“I have worked for conference tournaments before, and if your getting selected to do the regionals, you are supposed to be in the upper echelon of those working conference tournaments,” Allen said. “It was different because every game, you are working in front of 11-14,000 people, so I would say things were (more intense).”
Allen’s journey to umpiring at the college level began at the tail end of his playing and coaching career, having played college baseball at Lake Land and Kentucky State, perspectives he said have helped him understand the game better.
“I really do (think having played, coached and now umpired is an added benefit),” Allen said. “I feel like that has given me some insight.
“One of the things i know that when I was evaluated was that they like my instincts and anticipation of not just the play going on, but maybe the next play after the play that I have to call,” he said. “I think all of that has helped me to learn the ins and outs of baseball.”
His knowledge of the game has also helped him gain an understanding that he finds useful when dealing with coaches.
“The fans you pretty much block out,” Allen said. “As far as the coaches, you have to understand the moment of the game to understand (the situation). They’re passionate and we're passionate about we do.
“The main thing as far as coaches is listening to what they are saying. If you get to a point where you have answered their question, you have a decision to make.”
Allen went into detail about the selective process of being named one of 96 umpires to umpire a NCAA regional, going through a series of critiques before earning a recommendation.
“NCAA has a Midwest evaluator and he comes in and watches you and kind of critiques,” Allen said. “You have to be well within the conference, well enough that the conference coordinator can recommend that you be evaluated.
“With the exposure of college baseball, you have to be evaluated several times, so it's an honor to be considered.”
Allen talked about some of the challenges that have come with moving up in his umpiring career, between the speed of the game and the increased expectations.
“I think the one thing that is the probably the biggest difference is the speed of the game as you move up,” Allen said. “You’re only as good as your last game. It doesn’t matter what, as I approach going into 2017, (I did in 2016). From my standpoint, you start all over and you could mess something up pretty bad, and then goes your opportunity.
“I would say just the expectation at certain level can make it difficult, and that is where people feel the most pressure.”
With his first NCAA regional under his belt, Allen has set the ultimate goal of one day umpiring a college world series at the Division I level, having already umpired a Division III World Series.
“The ultimate goal is to umpire the College World Series in Omaha,” Allen said. “You are talking about eight umpires every year from all over the nation. But, you have to get regionals before you can do anything, so it kind of gets you in the mix, so to speak. My regional went very well.”
Allen – the husband of Vandalia graduate Jennifer Wehrle and father of three daughters, Lucy, Lola and Daisy – cited his family support as one of the biggest reasons he is able to continue umpiring college baseball, given the time demand.
“You have to go to meetings and I teach at clinics, and that is a lot of time away from family,” Allen said. “If I didn’t enjoy it, if I didn’t have the full support from my family, there is no way that I’d do it.
“Most of what I do is on the weekends, so it doesn’t really conflict (with my position as principal),” he said. “If it ever did conflict with my job, then I would have to re-evaluate, but it has not come up yet.” 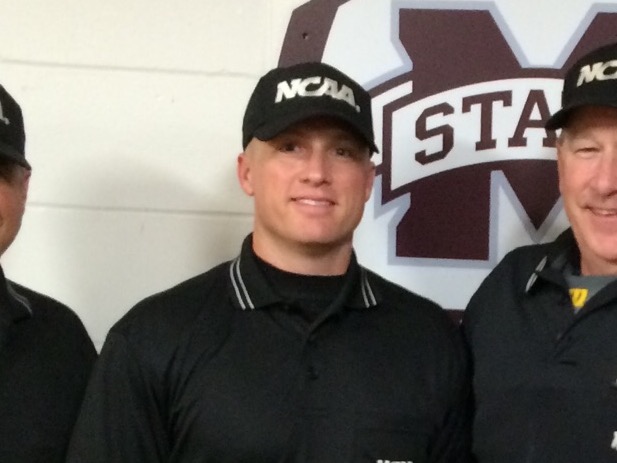 Rick Allen was one of four Illinois residents to be selected to umpire an NCAA regional and one of 96 overall.