Fresh off a state championship in triple jump, Vandalia graduate Ethan Meyer made his decision regarding the next step in his athletic and academic career, committing to Millikin University.
Meyer also considered Carthage College as one of his next possible destinations, but a brief visit to Millikin made up his mind.
“It was always down to Carthage or Millikin, but after talking to the Millikin coach and the things they had to offer, and just the atmosphere that I felt when I went there, I just felt like that’s where I wanted to be,” Meyer said. “I met some of the athletes on the team and it just really clicked, I just felt like I got to know everyone there, even though I had only known them for, I don’t know, maybe 20 minutes.”
While Meyer earned a state championship in the triple jump this season, he was also a fraction of a second away from competing in the 400-meter dash at state as well, an event he says he might compete at the college level.
“For sure triple (I will be competing in), but for the 400 (meter dash), I will probably be more like a 4×400 runner and just be the open 400 runner my freshman year,” Meyer said. “For now, it will probably just be the triple jump and the 400/4×400, something like that.”
The decision to continue competing at the college level wasn’t always something on Meyer’s mind, but he says it’s something he has thought about since a trip to state his sophomore year.
“It wasn’t something I had completely set my mind to. I was still thinking about it up until this year,” Meyer said. “It was always in my mind from when I went to state sophomore year. I thought, I could come back here senior year and my goal was to win state, obviously. That would look good for me, wanting to run track in college, for coaches that would want to scout me. It was always something that I wanted to do.”
Winning state in his senior year ultimately helped him make up his mind, along with some advice from his biggest supporter, his parents Tim and Mindy Meyer.
“Winning state (further motivated me); that just made me really think, I have never actually had a real jumping coach and I won state,” Meyer said. “I just think (about) what potential I could possibly have if I went and had a real jumping coach.
“My parents (have had a huge role in influencing me). They just listen and they give their full, honest, unbiased opinion of what would be the best decision for me, Carthage or Millikin, stuff like that,” he said. “They were really my go-to when I needed help with deciding which college I want to go to. I’m glad they pushed me to look into Millikin a little more, because now that’s where I’m going and I think I will be really happy there.”
With offseason work starting this month, Meyer is already preparing for the upcoming season that is set to start in January, riding the momentum of a state-championship.
“We are going to start having workouts every other week at Millikin for track kids, starting this month,” Meyer said. “I’m in contact with the coach and he will text me and give me a schedule, stuff like that. We will start having actual practice before the season starts in October.
“Everybody up there knows (I won a state championship). The coaches and a lot of the athletes already know, so that’s a lot of momentum (to bring into my first year).” 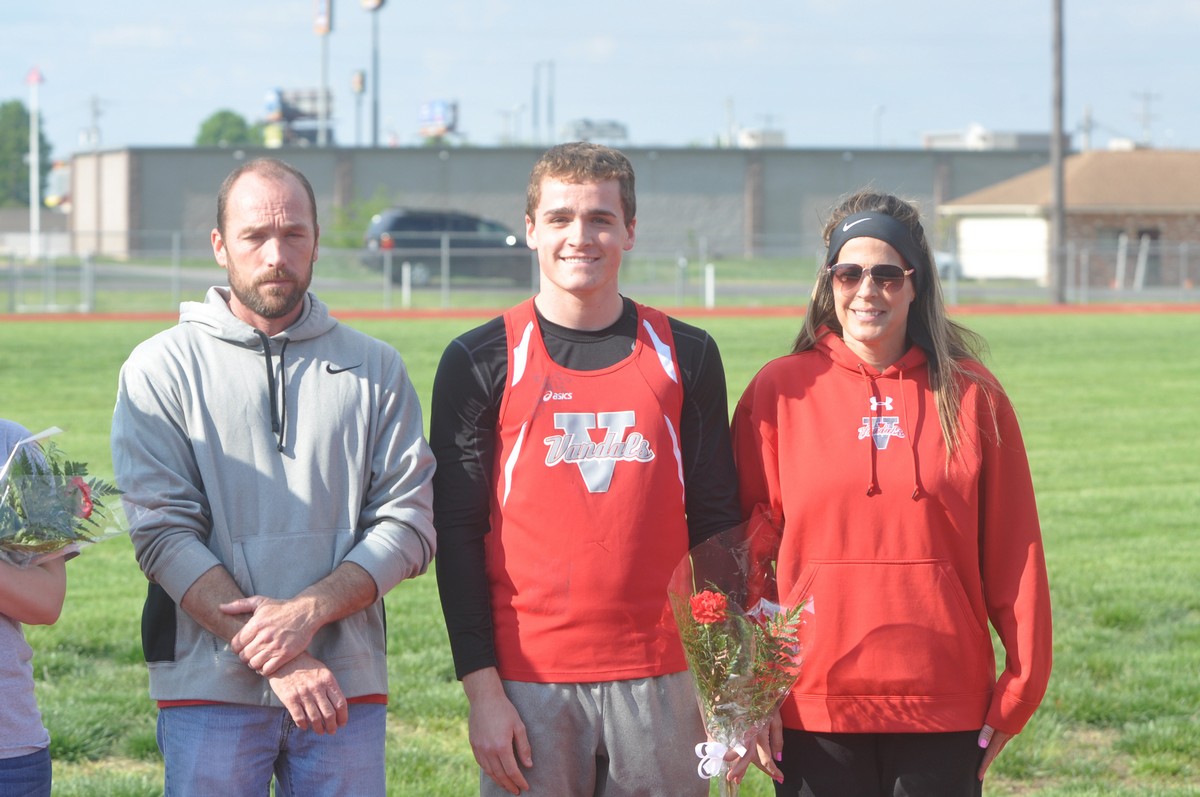 Ethan Meyer stands with his parents, Tim (left) and Mindy (right) Meyer, on senior night this past season.