Vandalia’s high school boys basketball team closed out its final home and summer shootout of the season Monday and Tuesday, ending on a string of quality performances.
After a 51-41 loss to Flora to open action Monday, the Vandals responded with three straight wins over Hamilton County, North Greene and Christopher.
“The first game of the shootout yesterday we lost to Flora. (It was a) good game, tight game and it came down to the wire,” Vandalia head coach Brian Buscher said. “We didn’t play great and we didn’t play bad. The rest of the games we played pretty decent.
“To me, summer is about finding the kid's roles and finding where they might fit in, not that things couldn’t change between now and basketball season. Kids might grow and kids might be a little stronger. It gives us an idea of what we have and what pieces we have.”
Vandalia kept the momentum going Tuesday morning, leading from start to finish in a dominant 64-53 win over Cowden-Herrick/Beecher City. Richie Well and Kelly Jones led the way on offense, with Dakota Graham coming off the bench for nine points.
Buscher talked about his team's success in transition, pointing to defensive rebounding as the biggest contributing factor.
“Getting out and going on transition, we want that plan on the break. We don’t want our outlet pass to be 2 feet away, we want to push it down the sideline and get out aand go,” Buscher said. “But, that all starts with the rebounding. Part of that is you have to box out and the other part is you have to be physical to get the rebound – if we aren’t doing that, than we are missing that part of the game and that’s where we are affected.”
While his team struggled at times to grab boards, it’s not something Buscher is concerned with in summer action.
“The bad part, or the good part, is that we did that a lot (struggled rebounding defensively) this summer, so you take that going into the season, where you are really only playing one game a night, two games a week…so you have fresher legs and you are in basketball shape. That part I’m not worried about, it’s the effort; the conditioning doesn’t bother me,” Buscher said.
Following the win over CHBC, Vandalia came up just short against Paris, as they couldn’t hold on to a slim lead late, ultimately losing by four.
The Vandals followed with a 43-30 win over Norris City in the first round of tournament action, before eventually getting eliminated against Altamont, who came back late to win, 25-18.
“We played well against Paris, but we ended up losing. The other games I thought we played pretty well, nothing spectacular, but I thought we played pretty good basketball,” Buscher said. “I thought against Norris City, we played pretty well. We knew they were going to hit some shots, because that’s the way they had played in the tournament.”
Buscher cited his team's final loss to a lack of intensity, stemming from the fatigue of playing eight games in two days.
“I thought we started off against Altamont OK and then we were just there, gassed out and couldn’t (finish strong),” Buscher said. “We had the same result in the last shootout. We were 5-0 and won the first tournament game and lost the second one; we were just kind of gassed.”
Another challenge with the summer basketball season is the activity of the players outside of basketball with a large majority of the team being a part of at least one other sport in the summer, if not two.
“We have kids doing football stuff, weight room stuff, baseball stuff and basketball stuff. That’s good for them to compete in all three sports,” Buscher said. “You have all this stuff going on in the summer, and when you combine that with basketball, I’m pretty happy. All in all, I thought we had a pretty good summer.” 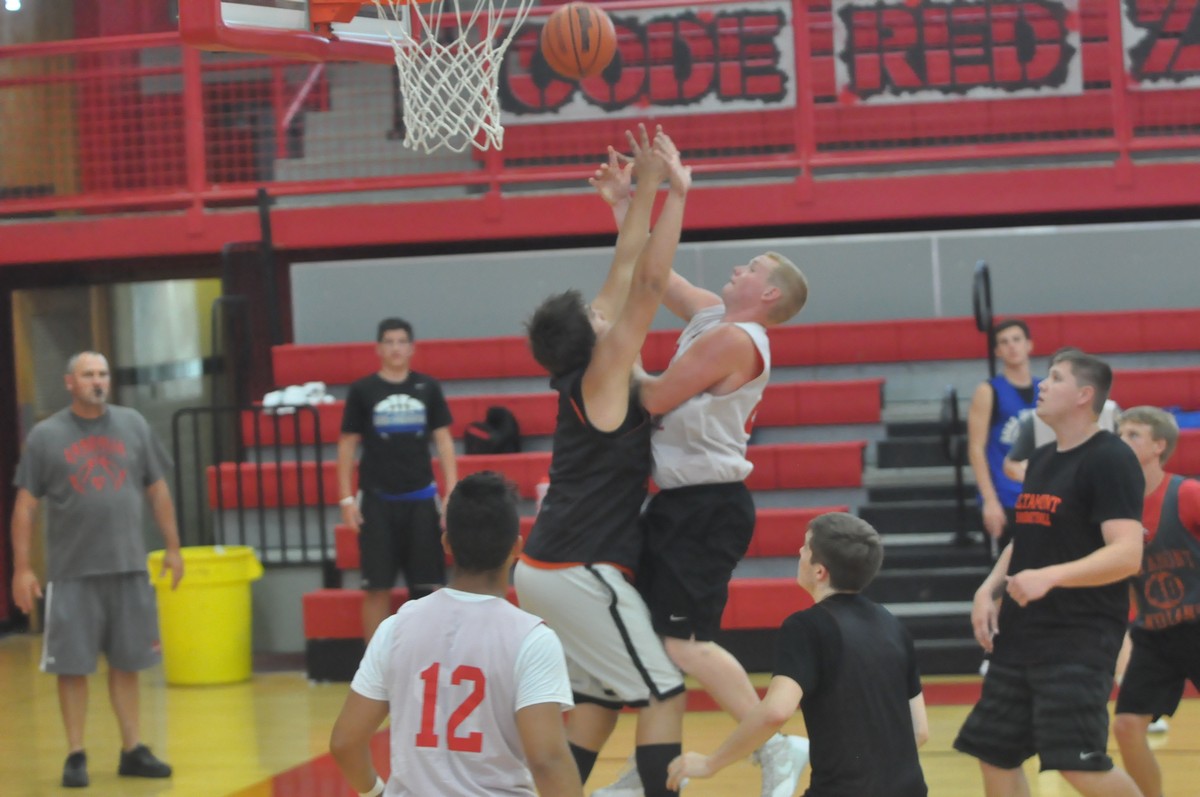 Garret McNary goes up for a layup over an Altamont defender in the second round of tournament play Tuesday afternoon. 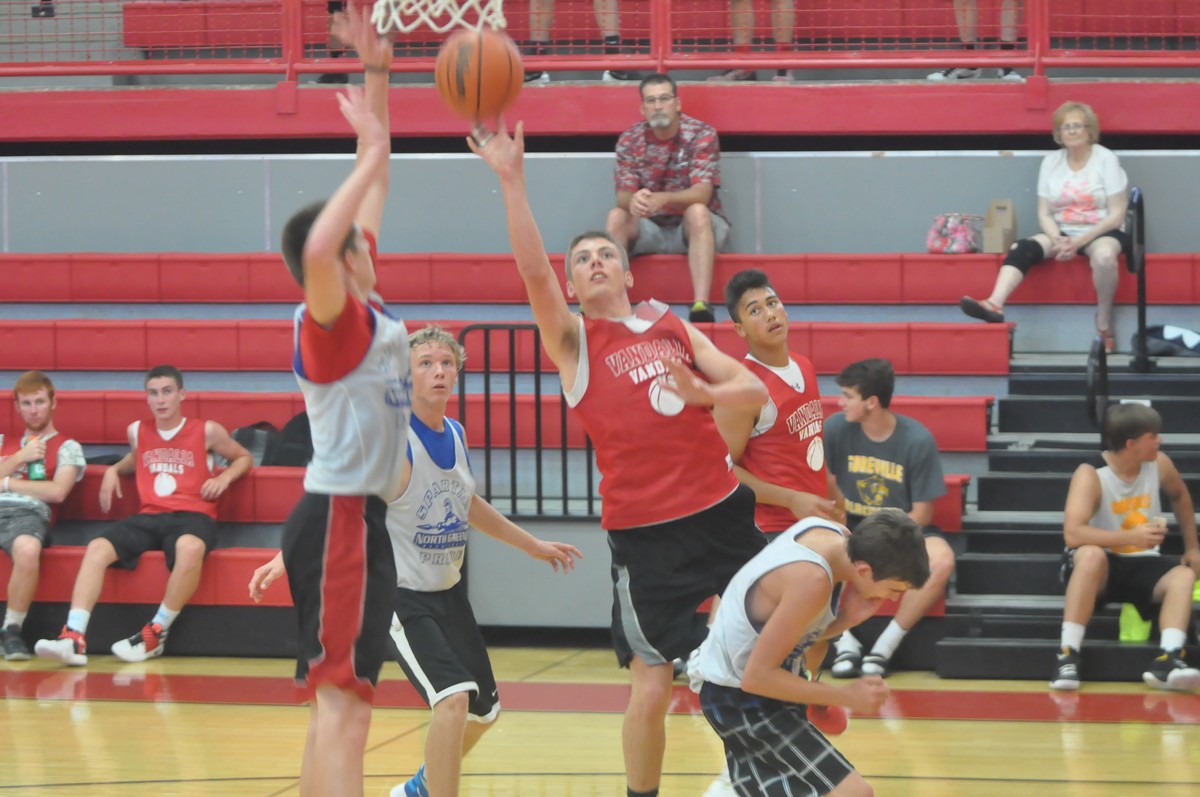 Richie Well rises to the basket over a North Greene defender Monday afternoon, with Kelly Jones watching behind. 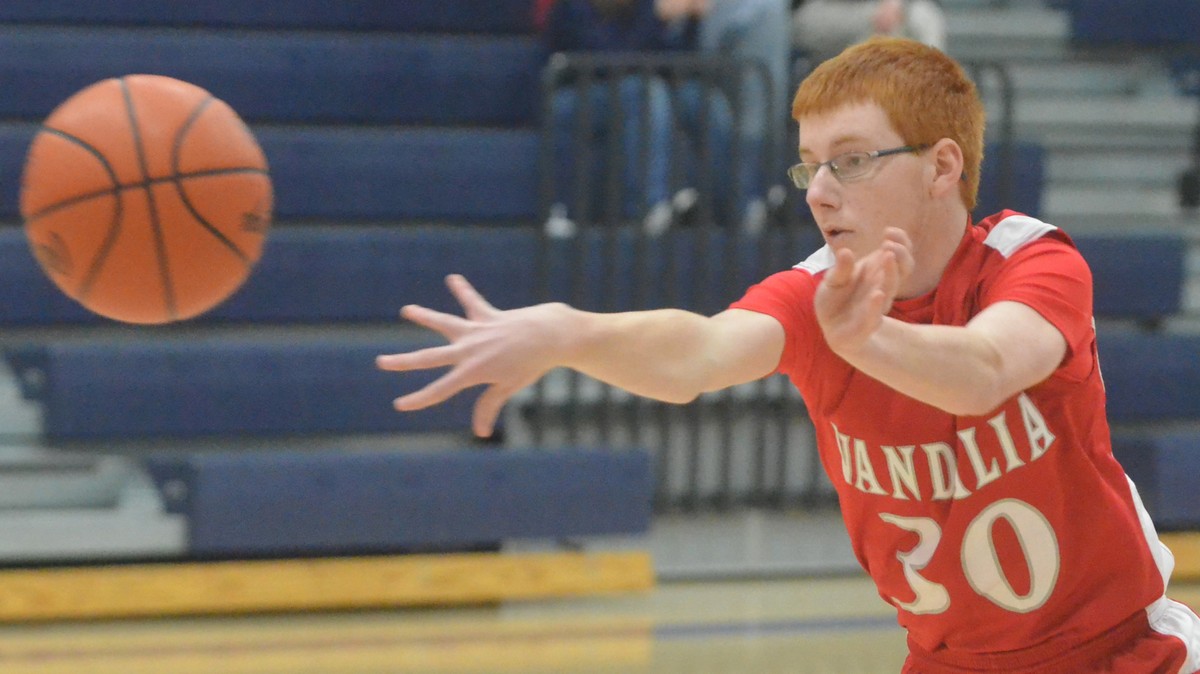 Preston Ruckman dribbles along the baseline past a trio of Altamont defenders, with Ethan Ferguson (25) looking for a pass under the basket.