Vandalia residents who love to read but are physically unable to visit Evans Public Library can continue to use that facility’s resources.

That’s because of the program that essentially takes the library to those individuals.
Since the early 1990s, Evans Public Library has offered a homebound delivery service to people living within a mile of Vandalia’s city limits.
Every two weeks, individuals who are signed up for the program can receive such things as books, audio books and DVDs. “Anything that they can come in and get we can take to them,” said Evans Librarian Jessica Blain.
Vicki Hipsher, who heads up the homebound delivery program, said it’s for “people who have no way to get to the library or have no family members who can come get things for them.”
The program policy states, “Homebound delivery service was established to provide library materials to those patrons of the Evans Public Library District who are restricted to their homes and unable to get to the library because of: permanent physical disability, visual impairment, temporary convalescence from illness, injury or surgery, have no other means of receiving library service such as delivery through family member or friends, or live in a nursing, assisted living or retirement home. Patrons are considered homebound if they have a condition that restricts their ability to leave their place of residence. If a patron drives, he/she would not be considered homebound.”
While the program is designed mainly for individuals who are permanently homebound, Blain said, “We also do it on a temporary basis, such as when someone has surgery” and is homebound during his or her recovery period.
Currently, 22 people are signed up for the service, with that list including residents of Brookstone Estates, Vandalia Rehabilitation and Healthcare Center, and Fayette County Hospital Long Term Care.
Individuals who wish to use the program should contact Hipsher at the library, 283-2824.
“When I talk to the patron, I ask them to tell me the authors that they like or the genres they like,” Hipsher said. “I also ask them if they have special requests, but a lot of times they leave it up to me to pick out things for them.
“I also ask them why they need the service, to make sure that it’s not being abused by those who are able to get out on their own and can visit the library,” she said.
Hipsher pulls from the books in the stacks at Evans Public Library, as well as using the interlibrary system of which it is a member.
Books and other library materials are delivered to homebound patrons every two weeks. Previously delivered materials are picked up at that time, though patrons can have materials for more than two weeks; overdue fines are not charged for homebound materials.
In addition to delivering and picking up materials, Hipsher’s duties include keeping track of what materials each patron has used in the past and arranging for the use of materials in the interlibrary system.
“It’s a time-consuming service,” Blain said. “It’s not just delivering the books, it’s also such things as picking out materials that we think the patrons will like.
“There is a lot of behind-the-scenes work,” she said.
Hipsher enjoys serving patrons through the homebound delivery program because she sees so much value in it.
“I look at it this way – I love to read, and I would hate to know that someone can’t enjoy a book.
“It’s just nice to know that we can provide that service to someone who can keep reading,” Hipsher said.
“I told my husband that if I didn’t do this as part of my jobs, I would probably to it for free,” she said. “It’s very rewarding to know that you are providing books for people who love to read and that you are also providing them with some social interaction that they might not otherwise have.
“It’s just a book (that we are providing), but to some people, that’s what they look forward to,” Hipsher said.
Hipsher and fellow library employee Lori Cearlock deliver and pick up books and other library materials, but local residents who would like to get involved are more than welcome to do so.
“We would love to have volunteers get involved in this,” Blain said. “We would have everything ready for them; all they would have to do is pick the books up and deliver them.” 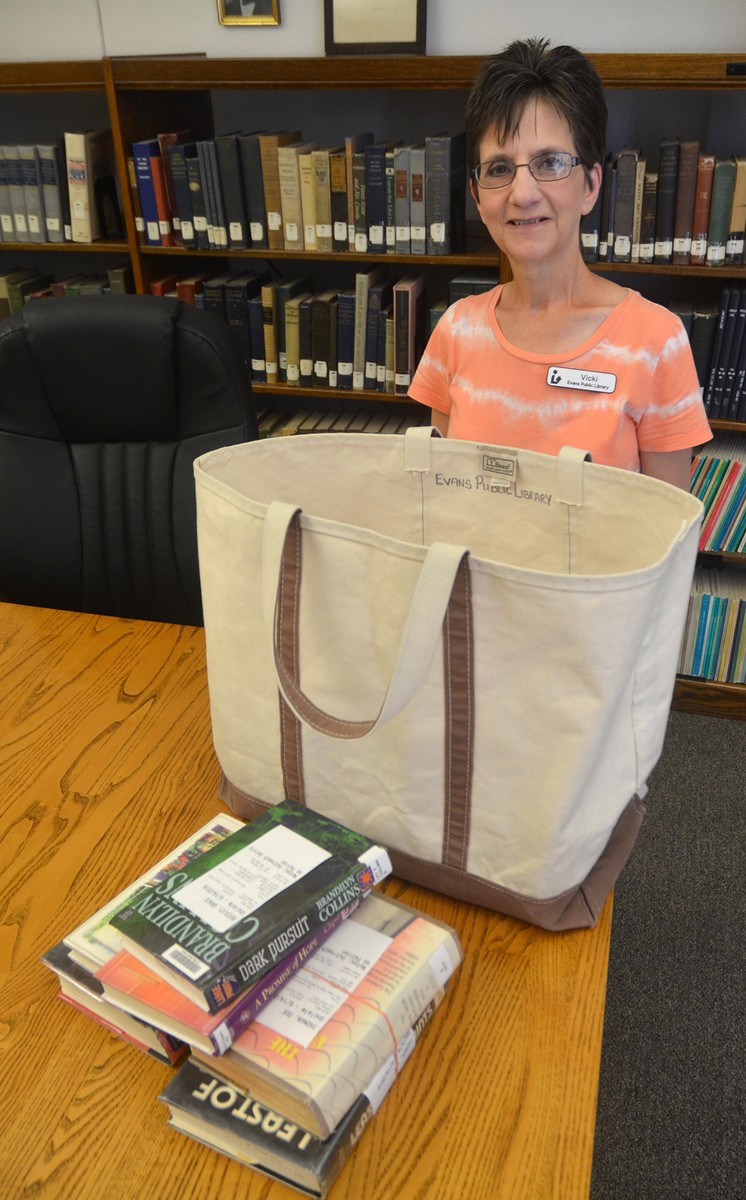