It was vandalism, abuse and failure to follow guidelines that spelled doom for the city of Vandalia’s recycling program. The same could also bring an end to electronic recycling in Fayette County.

After the trailer used to haul electronic items to a recycling center was vandalized, the Fayette County Soil and Water Conservation District said that such actions could impact the future of that recycling program.
Karen Sanders of the SWCD said that someone had recently spray-painted the front and one of the sides of the trailer, and that money used to keep the program going would have to be used to remove the spray paint.
While the program was initially offered free of charge, the cost of collecting and transporting electronic items such as TVs, computers and printers necessitated charging a $5 fee for each load of items turned in.
The money collected is used to maintain that trailer, with the maintenance costs including the purchase of tires and hitches, Sanders said.
And while many are paying that fee, there are some who are not, Sanders said. And many of those who are turning in electronic items are not following the guideline of placing the items in the trailer.
The program allows people to turn in electronic items on Wednesdays, but can make arrangements to accept items at other times.
The problem, Sanders said, is that some people are simply leaving items outside the SWCD office at Third and Johnson streets, on Wednesdays and other days of the week. That means that Sanders alone has to load the items, including console TVs and heavy computers, into the trailer.
She emphasized that the SWCD is pleased to offer the service and wants to continue to do so; however, it simply asks that those using the service pay the $5 fee and follow the program guidelines.
“It’s a voluntary service,” she said. “It’s not something that we are required to do.
“But it’s something that we want to continue offering to the people of this community and this county,” Sanders said. 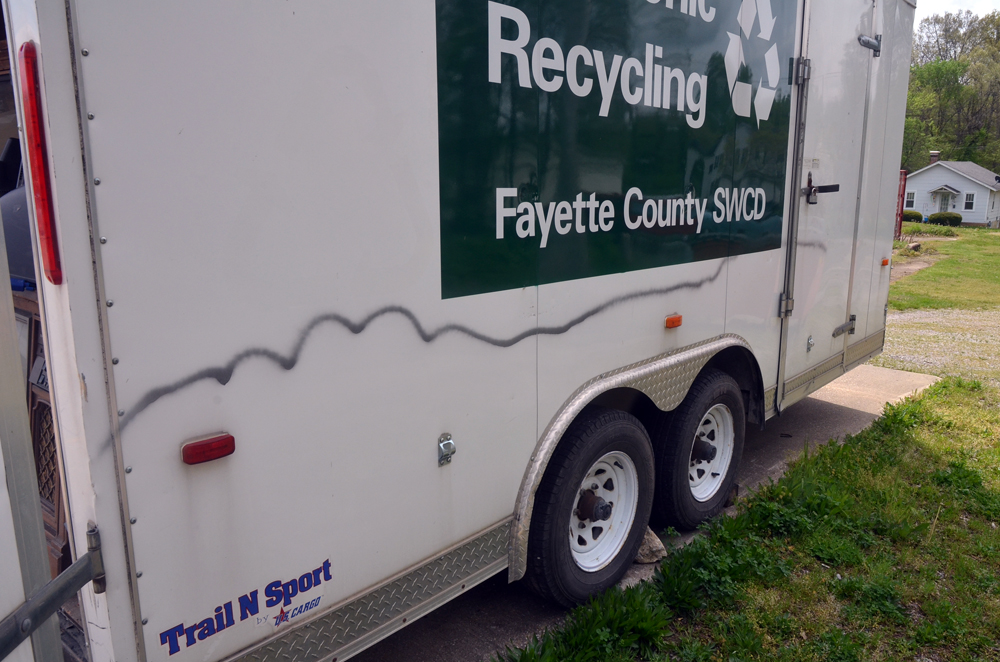 Someone recently spray-painted the exterior of the local electronics recycling trailer, and the expense of removing it was covered by fees to operate the program.