Saturday afternoon’s game between Vandalia and Okawville was the epitome of a pitchers' dual, as Alec Schroeder went the distance for the Vandals, allowing just two runs on seven hits and one walk, while striking out six.
However, despite Schroeder’s best effort, Okawville starting pitcher Payten Harre delivered a complete game shutout, falling just two outs shy of a no-hitter, as he led Okawville to the victory, 2-0.
“That’s baseball – they are a good program and they have guys that can put the ball in play,” Vandalia head baseball coach Nick Casey said. “Their pitcher was crafty – he was throwing changeups and hitting spots. Sometimes you just have to tip your hat to them.”
Okawville was able to muster up just enough offense against Schroeder, who was coming off a rough outing from the previous weekend against Effingham St. Anthony.
After a scoreless first, the Rockets were able to capitalize on a Vandal error, as a single came all the away around to score thanks to a HBP and fielding error. Schroeder threw two more scoreless innings before Okawville added another run in the fifth, laying down a textbook sacrifice bunt to jump ahead, 2-0.
That was the extent of the offense, as both teams were unable to put anything else together. Vandalia squandered a scoring chance in the bottom of the seventh, as Garett McNary put an end to Harre’s no-hit bid with a soft single to right. With two outs, Scott Shulman was able to draw a walk to put runners on first and second, but Vandalia could not capitalize, as a pop out to Harre completed the shutout.
While Schroeder picked up the loss, Casey was ecstatic with his performance, hoping it will help him gain some confidence back. He could not say the same about his offense.
“We only had one hit in that game and I don’t know how many hits they had, it was just a pitchers duel. The main thing was, I was glad to see Alec have an outing that he can take into his next start and hopefully he can,” Casey said. “That was good to see because Alec had been struggling and he came in and threw a pretty good ball game today.
“Hopefully that confidence, he can take into his next start and maybe the offense will get back going. It was nice to see him come out and throw a decent ball game.”
Vandalia dropped to 7-5 with the loss, with its next action scheduled for Tuesday against Altamont (see related story).
Vandalia vs. Okawville
OV  0 1 0 0 1 0 0  2 7 2
VA  0 0 0 0 0 0 0  0 1 1
VA: McNary 1-3; Schulman 0-0 2BB; Caleb Slater 0-2 BB.
WP: Harre 7 IP 0R H 3BB 2K
LP: Schroeder 7 IP, 2R, 7H, 6K, BB 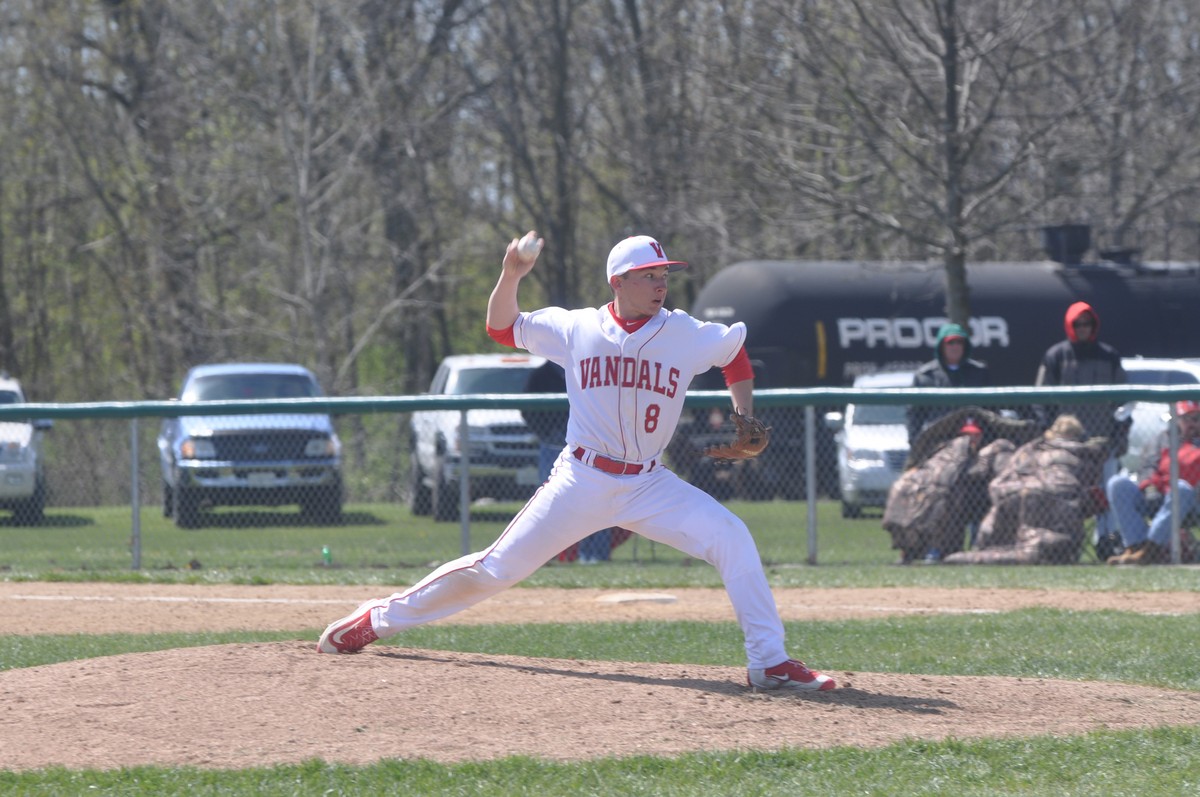 Tucker Willms follows through to make contact against Okawville.