It was a cold and windy atmosphere last Thursday evening as Brownstown/St. Elmo refused to let the weather cool its bats, plating 10 runs in a five-inning shutout over Pana.
“I thought we came ready to go from start to finish. Once we got them down, I know we started playing some other guys, but I thought we jumped on and played well early, and that was the key to the game,” BSE head coach Ryan Beccue said. “We have played enough games in this type of weather, I told our guys, ‘We have no excuse on a windy day,’ and it actually calmed down. It’s cold, but we have had worst.”
After BSE's lone senior, Noah Flowers, worked a perfect top of the first, the bats got going.  Lewis Brown and Cole Horner reached base on a hit by pitch and double, respectively, as Landon Feezel came up to the plate.
Feezel delivered, as he ripped a line drive over the left-field wall for a three-run home run to give the Bombers the early lead.
“That was a huge hit for us, because you get your first two guys on a hit-by-pitch and base hit, and then to have your three-hitter do that kind of set the tone for the whole day for our guys, to relax and put some pressure on them,” Beccue said. “That was a big key.”
Flowers was able to work out of trouble in the second, as he induced a strikeout and pop out to exit the inning with runners left on first and second. Already up three, BSE began to pile on, as Horner, Flowers and Isaac Maxey collected RBI’s, with Maxey delivering a two-out single, driving in a pair to cap off the inning for BSE leading, 8-0.
While the bats were strong from start to finish, Beccue was not surprised, citing his team’s recent offensive success.
“We have been playing better baseball the past couple weeks and we are hitting a lot better,” Beccue said. “I’d like to have some of those games back a couple weeks ago where we didn’t hit so well, but that’s part of it.”
BSE added one more in the bottom of the third, as Horner drove in his second RBI of the game with a sacrifice fly.
After a scoreless fourth, Flowers was able to work another scoreless inning in the top of the fifth, closing out his complete game effort with a pair of strikeouts, giving him eight on the day.
“He just kind of got better throughout. It looked like he just kept throwing the ball, getting a little confidence out there,” Beccue said. “We have faced some quality teams and had some tough innings with quality teams, so I think after he threw up a couple of zeros inning after inning, he got his confidence going and finished the game with 55 pitches. That was a big deal for us, too.”
Needing a run to 10-run-rule Pana, BSE delivered. Dylan Brooks reached base on a walk to start the inning, and reached third on a stolen base and fielder's choice setting, Brown up with one out. Brown came through in the clutch, as he knocked home Brooks with a groundball up the middle, more than enough for Brooks to reach home safely.
Being amidst the middle of the season, Beccue commented on the challenge of having available pitchers when going through a lot of games in a short stretch.
“It definitely can take a toll on your pitching staff (playing a lot of games in a short amount of time), especially when you get two games on a Saturday,” Beccue said. “We are doing that three straight Saturdays.  It takes a toll on our pitchers, but at the same time, that’s how you get better at playing baseball. That’s some of the fun of baseball, getting that experience is how you get better.”
With the win, BSE improved to 4-7, a record Beccue felt has a lot to do with the recent opponents, as they have played a variety of tough non-conference opponents.
“I always like to see that we are getting better and the kids are having fun. Our record, we are still not worried about the record – everything is non-conference for us basically,” Beccue said. “We are getting better and it was nice to get on the winning side.”
BSE vs. Pana
PNA 0 0 0 0 0  0 1 2
BSE  3 5 1 0 1  10 6 2
BSE: Horner 2-2 2B 2RBI; Feezel 2-2 HR 3RBI; Maxey 2-3 2RBI.
WP: Flowers 5IP, 0R, H, 8K, BB

Cole Horner takes off after ripping a double to left field in the bottom of the first inning. 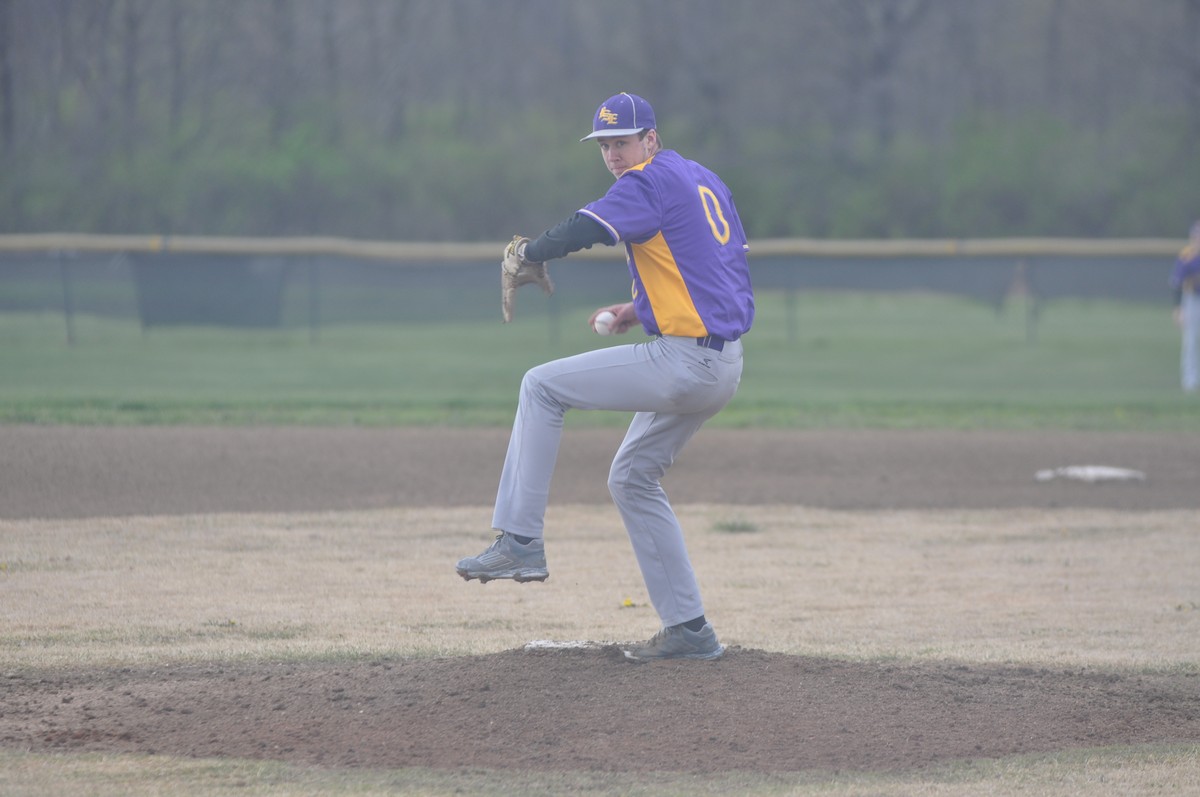 Noah Flowers throws a pitch in the first inning against Pana Thursday evening. Flowers tossed a five-inning shutout for the win.