The South Central Lady Cougars came out aggressive Thursday night as they faced off against the North Clay Lady Cardinals, coming away with a 53-43 win to improve to 2-0.
Senior forward Xada Jones kicked off the scoring with a solid post move for a layup inside.  Sophomore Keely Smith followed up with a pair of baskets inside the paint to give the Cougars an early 6-2 lead.
An aggressive South Central defense put North Clay at the line five times in the first quarter, allowing them to tie it up at 11 going into the second.
A rebound and following put back from the Lady Cardinals gave them a 13-11 lead with a little more than six minutes in the second.  South Central countered with an 8-0 run to regain the lead at 19-13.
North Clay answered with an 8-0 run of its own to close out the first half to take 21-19 lead.  South Central head coach Gary Kapper was not pleased with his team’s first-half performance, stressing their over-aggressive play.
“I think, the second half, we just told them, we should been up a few more points. We were playing bad and we were still in the game. We could have been in worse shape than what we were,” Kapper said. “Our play was aggressive. We weren’t taking what they gave us and were forcing things, and that’s something we got to work on, is not forcing it on offense.”
Smith kept the Lady Cougars within reach in the first half, scoring a team-high nine points. However, her aggressive play put her in foul trouble, as she went into the half with four, keeping her on the bench for the entire third quarter and some of the fourth.
South Central’s leading scorer from last season, Abby Hahn, came out strong in the second half after only four first half points. She quickly drew a foul and knocked down a pair of free throws to tie the game up.
A short-range jumper from North Clay gave them the lead back. Alannah Sigrist countered with a post move inside to tie it back up at 25 apiece.
South Central began to pull away with less than five minutes in the third quarter, as a pair of baskets from Hahn and Sigrist gave the Lady Cougars a 34-25 lead. Kapper attributed a defensive change for the second-0half success on offense.
“Defensively, we decided to come out in the second half in man, and that is just something we have been working on and we still need to work on. I think coming out in man helped us be aggressive more on offense.”
North Clay would battle back, cutting the lead to 37-33 going into the fourth.
South Central stole the inbounds pass to start the fourth, leading to a North Clay foul and a pair of free throws from Slater to extend the lead to 39-33. The back-and-forth action continued as the Lady Cardinals were able to tie the game 41-41 with less than four minutes to play.
After missing the entire third quarter due to foul trouble, Smith came back strong late in the fourth quarter, scoring five straight points to give South Central a 48-41 lead.
Sophomore Serina Lee sealed the game for South Central, coming up with an offensive rebound and basket off a missed free throw to extend the lead to 51-42.
“That was big, having her get inside and get the rebound," Kapper said. "That was just a big shot that helped us pull away there a little bit."
From there, South Central was able to hold on for the 53-43 win.
While Kapper was pleased with the second-half turnaround, he said there is still plenty for his team to learn moving forward.
“At the end of the game, though, we actually needed to slow it down and we were still pushing the ball too much and forcing it when we need to slow it down,” Kapper said.  “We’re still learning to handle some things when were ahead, because a lot of times we aren’t used to being ahead. “
Smith finished the game with a team-high 19 points as she turned in an impressive fourth quarter, scoring 10.
“Keely just has improved, but she just needs to stay out of foul trouble,” Kapper said.  “That’s her biggest thing, because we need her on the floor.”
Hahn struggled at times offensively but still managed to finish with 15 points, leading the team in the third quarter with nine.
“Abby was down a little bit tonight, but Abby helped run the offense and did a lot of other great things for the team, making passes and running the offense,” Kapper said.
Other scorers for South Central were Sigrist, with seven; Slater, with six; Lee, with two; Sidney Wilkins, with two; and Autumn McCoy, with two.
Despite starting the season 2-0, Kapper believes his team has yet to put forth a complete-game effort.
“We still have to get in better basketball shape to be able to play this type of game for four quarters, but we will get there.”
The Lady Cougars have a lengthy break coming up before facing off against National Trail Conference opponent Brownstown/St. Elmo on Monday. 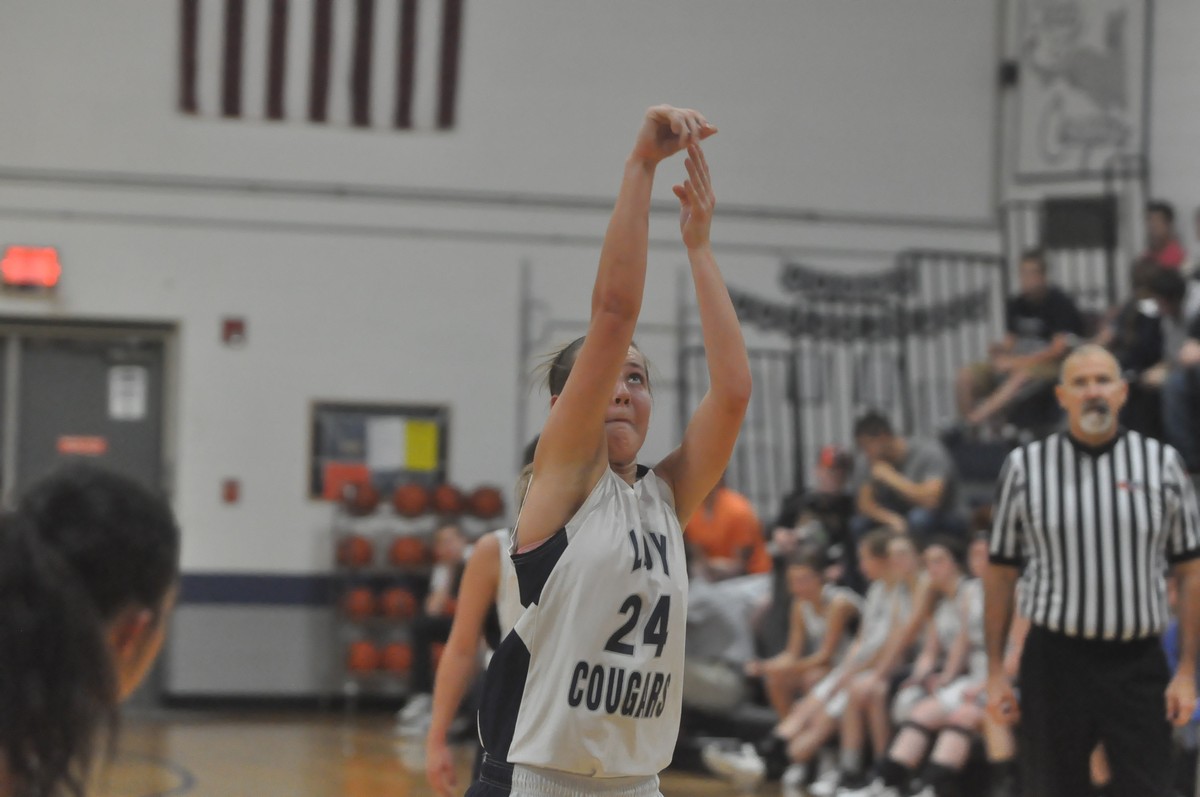 Alannah Sigrist knocks down a free-throw in the second quarter last Thursday night. 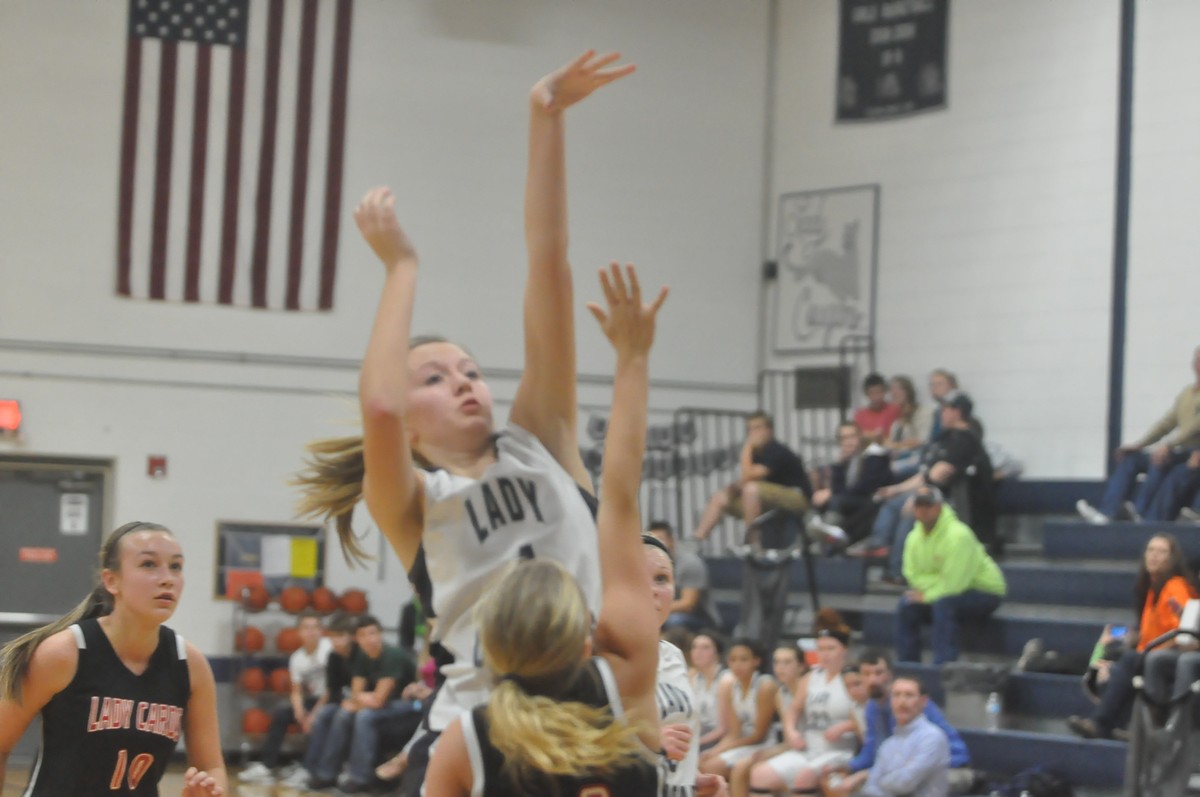 Keely Smith (4) knocks down a shot over a North Clay defender last Thursday night. Smith finished with a team-high 19 points. 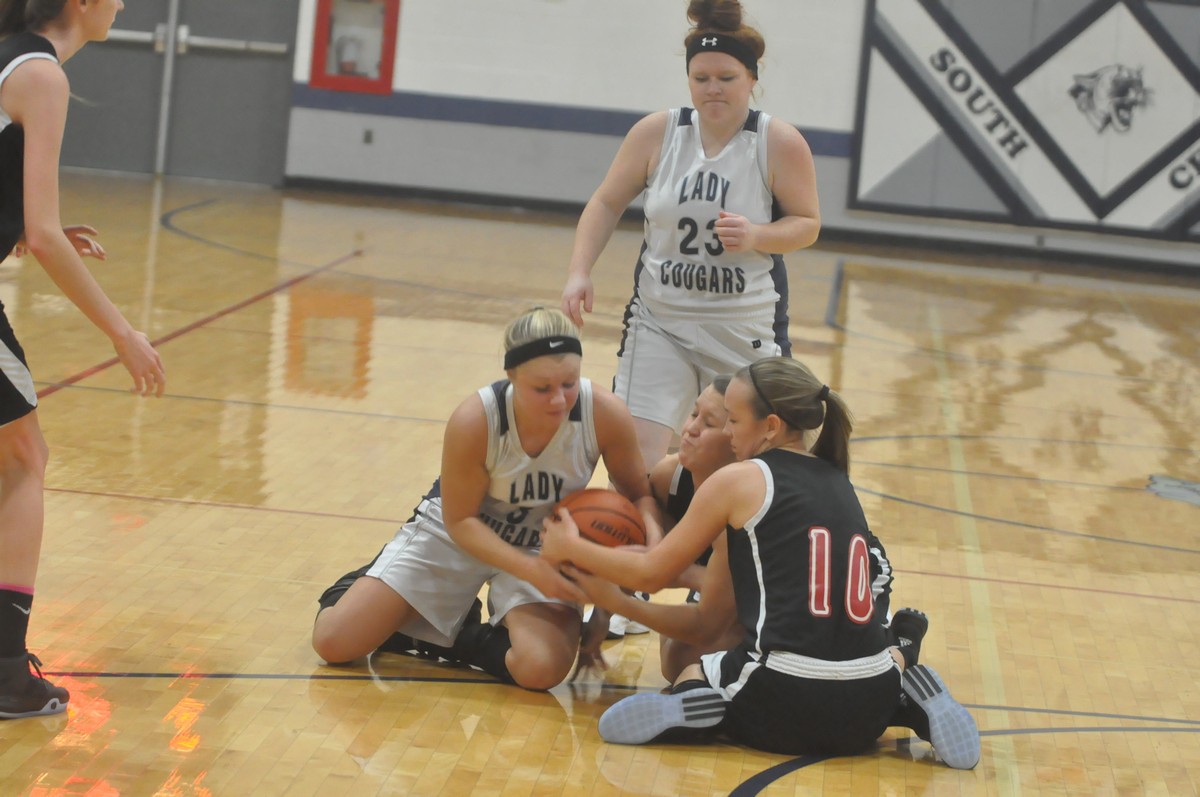 Abby Hahn battles for the ball with two North Clay defenders. Hahn finished the game with 15 points in the 53-43 win.