With the fall season of sports now finished, it is now time for the winter sports season.  Over the next couple of weeks, women and men’s basketball seasons will be getting underway.
The Vandalia Community High School boys and girls basketball practices have begun, along with the Vandal wrestlers.  Girls basketball has just completed its first game of the season, a 54-37 win at Altamont, and the men’s season is set to kick off next Tuesday with a home matchup versus the South Central Cougars.

Boys Basketball
The Vandalia boys basketball program finished the 2014-2015 season 7-22, with a win over Staunton in the first round of regional play before losing to Greenville to end its season.
“We were in a bunch of games and had chances in a bunch of games. Being as young as we were last year, and we are still young again this year. I truly believe you have to be in those situations before you can overcome them,” head coach Brian Buscher said.
While the team is returning a decent number of players with varsity experience, it still lacks any senior presence, making for a very young team.
“I think, even though we don’t have any seniors right now, these guys being in those situations can improve in them this year. I think we will be stronger in those tighter games coming down to the wire,” Buscher said.
The Vandals will have to deal with replacing last year’s senior class of four, including last season’s leading scorer, Collin Nestleroad.
“Collin Nestleroad was a real, real nice ball player, and Austin Durbin played his heart out,” Buscher said.  “But these guys have a lot of experience coming back, a couple starters and a couple guys that played a lot of time. That part (varsity experience) is not as scary.”
Among those returning with varsity experience, Buscher will look to certain players to be a leader on a team that lacks any senior presence.
“Definitely Richie Well – he’s a junior, he knows how to be a leader. Preston Ruckman is kind of a fire-up guy and Nathan Casey is a quiet guy but will talk a little bit,” Buscher said. “These juniors and sophomores are a close-knit group. We just need something to get them all stuck together.”
With practices beginning just this past Monday, Buscher has made it very clear what he wants his team to focus on in order to ensure they have the best chance of winning.
“Rebounding, rebounding, talking, communicating. If we don’t rebound, we're not going to win games,” said Buscher
While rebounding is key for all teams, Buscher believes it is an even bigger focus for his squad given their overall lack of size, something he believes is the team’s biggest weakness.
“Our biggest weakness is we don’t have any size. We do have some post players,” Buscher said. “We have to limit the other teams offensive possessions and that’s why we are stressing rebounding.”
While the team's biggest weakness relates to size and rebounding, Buscher believes that his team’s biggest strength this season should be its ability to create offense.
“Probably our biggest strength is we can score. Some people like to say we get up and down,” Buscher said.  “Yes, we do, but we have some scorers who are going to keep us in some ball games and some we shouldn’t be in, hopefully put us over the top in some of those as well.“
The boys season is set to kick off next Tuesday, followed by the Canton Thanksgiving Tournament with matchups versus Delavan, Canton and IVC. Buscher believes the stretch will be a good test for his young team.
“I think these first four games for us are a good measuring stick, because South Central got us last year, they played real well. Delevan and Canton at the Canton Tournament, those were two pretty tight ball games that we lost by eight or 10,” Buscher said.
“I think seeing how we do against those three teams is a good test. There are just different parts of the season, some tougher stretches that are measuring sticks.  Our first measuring stick is the first four.”
While it’s clear the Vandals will be aiming to improve upon last year’s record, Buscher was hesitant to throw out any specific expectations as far as wins and losses are concerned.
“As far as wins and losses, I don’t really like to throw out a number there,” Buscher said. “But I think if we can overcome the size thing by having five guys go and get rebounds, and we can play with some emotion and overcome some of those bad situations, we will be sitting good at the end of the year. “

Girls Basketball
Entering her seventh season as the women’s head basketball coach, Michelle McNary hopes the team can continue to improve.
The Lady Vandals finished the 2014-2015 season 17-12; a year after finishing with only seven wins.
“That’s definitely a goal of ours, to get better. These girls, the four seniors (Karlie Bright, Leah Francis, Madelyn Hosick and Makayla Tinker) that we have, I think they know this is it for them,” McNary said. “This is probably the most returning we have had for a senior class. Barring any major injuries, I think this is a team that can do something.”
With the first couple of weeks of practice behind them, McNary said the focus has been on defense and driving the ball down the court.
“(Our focus has been) pushing the ball down the floor, and our defense. I feel like our defense in the second half of last season helped turn things around."
McNary expects sophomore Olivia Marquardt to round out the starting roster for the Vandals.  She plans on being able to use a steady rotation of seven players throughout the season.
“Olivia Marquardt is a sophomore, she is possibly going to be our fifth starter. This summer, she played real well for us,” McNary said. “I have about seven real strong players right now that I think I can change in and out without hurting us.”
While the Lady Vandals are returning four seniors, they will have to deal loss of one of last year’s leading scorers, Emma Meyer.  With Meyer gone, McNary will look to her seniors to step up and lead the team offensively.
“The biggest thing that we have to do is that we struggled shooting; our shooting percentage hasn’t been great. That’s why we are stressing pushing the ball a little more,” McNary said. “Offensively, we have to have a better shooting percentage and we need some of those seniors to step up.”
McNary said that  one of the team’s bigger weaknesses is that it is unselfish to a fault.
“I think we are really unselfish; they have always been that way. Honestly, it’s to a fault where they don’t care if they score. I have said that one of them has to step and be a leader and lead us offensively,” McNary said.  “That is a big key for us being able to win a lot of games, knowing we have someone who can step up and carry us.“

Wrestling
The Vandalia wrestling program has a long history of success, and the 2015-2016 season should not be any different.
Head coach Jason Clay is entering his 10th season leading the Vandal wrestlers, and has high hopes for his squad.
“As a team, we have a standing program goal to be state champions. We have fallen a little short of that recently, but that is the program goal,” Clay said. “We hope by February to be good enough to win the regional and advance on to Bloomington for dual team state.”
The team is returning three state qualifiers from last year – senior Chaston Womack, who finished the 2014-2015 season 37-10, including a first-place finish at the Civic Memorial Tournament; senior Bobby Bradley, who finished the season 35-7; and senior Kendrick Woolsey who finished 36-15, including a second-place finish at the Civic Memorial Tournament.
The Vandals will be faced with replacing two state qualifiers from last year – Jake Stewart, who went 39-5 and Ryne Lipsey who finished 40-8. However, this is something that Clay says a good team will be faced with every year.
“If you have a good program you have to replace good seniors every year. We lost multiple state qualifiers and a lot of victories,” Clay said. “We will need guys to rise up and fill their shoes and young guys to step in to starting roles and compete every match.”
Along with the returning seniors, Clay will look to some of the younger guys to help pick up the slack this year.
“Tanner Swain, Luke Francis, and Zack Stephenson are all freshmen who have wrestled in the past in our kids club and could see a lot of varsity matches. Sophomores like Jarrett Paslay, Garret Stewart, Matt Ledbetter, Wyatt Goade and Rilley Smock could all be varsity starters for us this season,” Clay said.
With the season set to begin in early December, Clay will be looking to his more-experienced wrestlers to help the rest of the team get into the proper mindset.
“We try to teach the young guys how to work hard everyday. Some days, the season gets to be a grind and you have to push through that to get to February, when all the post-season occurs,” Clay said. “I expect our seniors to be the team leaders, especially in the practice room. Quality practice partners are so critical to achieving at a high level. Bobby, Chaston, Luke and Kendrick are all four-year starters and know what it takes to get the job done.” 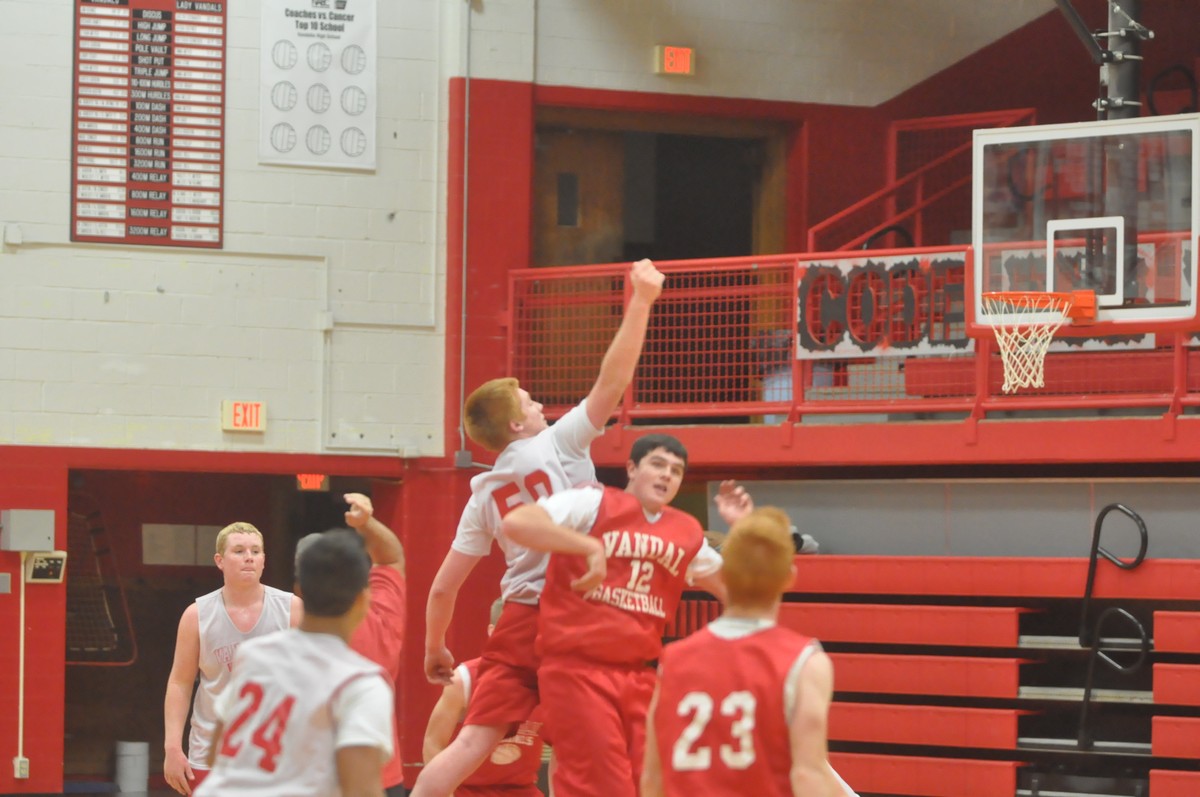 Kain DuFuax (50) and Nathan Casey (12) battle for the tipoff during a 5-on-5 scrimmage in practice last Monday. 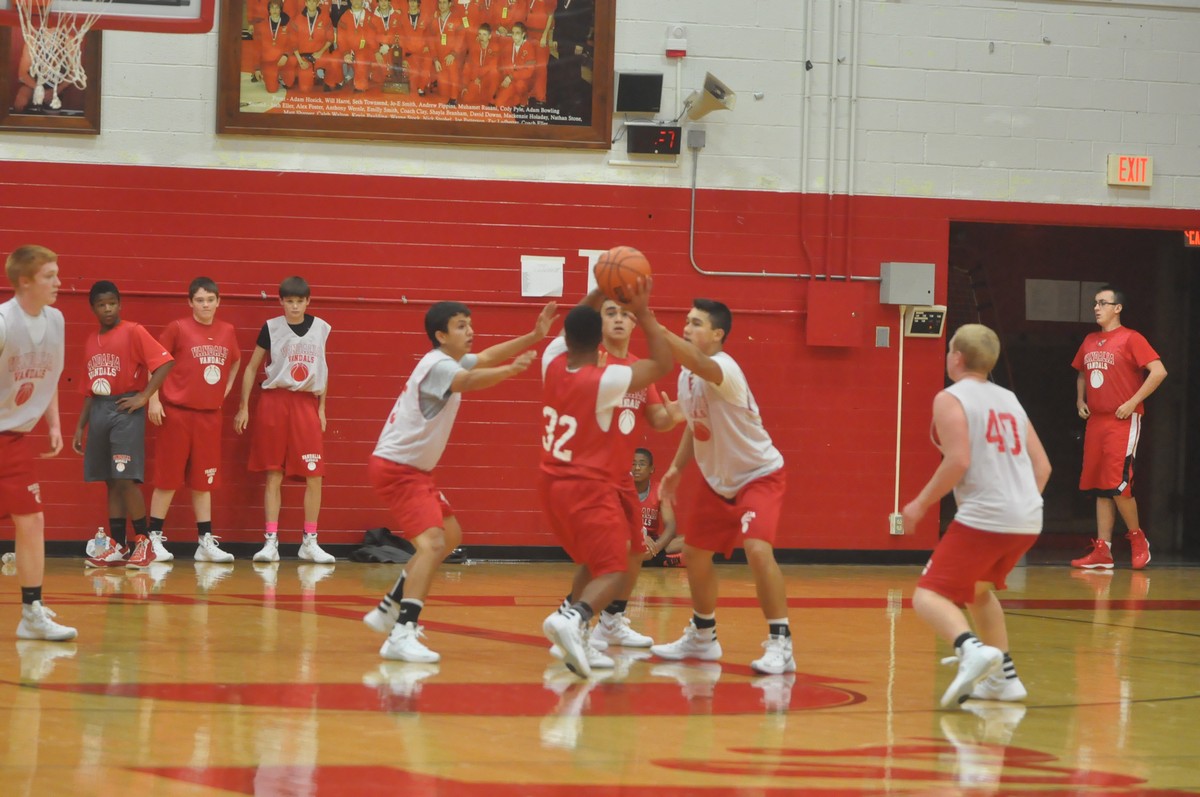 Trevor Smalls is contested inside the paint, looking to pass. 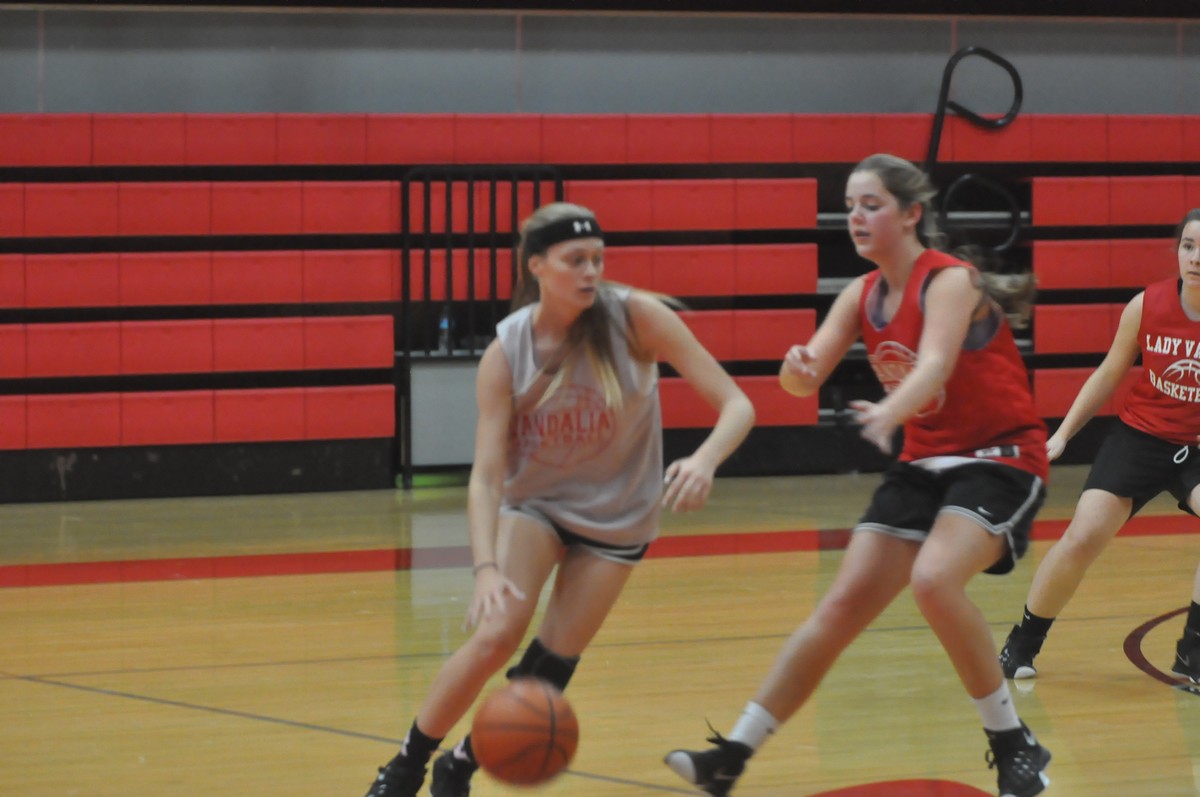 Madison Klanke (left) drives to the hoop during a 5-on-5 scrimmage in last Thursday’s practice.