OBLONG — Starting out the season, St. Elmo/Brownstown high school volleyball coach Elise Asher made it very clear that her team’s biggest weakness was its size.  However, that did not stop them from turning in what can only be considered a very successful season.
Coming into the regional finals last Thursday night against the Clay City Wolves, the Lady Eagles had compiled a 23-12 record, which included a second-place finish in the National Trail Conference tournament and a first-place finish in the Egyptian-Illini Conference tournament.
“It has been a successful season. You know were not really tall, were not huge hitters. This team is cohesive, they support one another and they play well together,” Asher said. “We make the unimaginable happen from time to time and I’m just very proud of their efforts and the work they put in for the entire season.”
Although, SEB met its match in the IHSA 1A regional finals in Oblong against Clay City, falling in a very closely contested match, 26-24, 22-25, 21-25, it battled back throughout all three games.
The Lady Eagles came out to a quick start in the opening game, taking an early 2-1 lead following a kill from senior hitter Emily Bone.
Clay City would battle right back, taking a sizeable 16-9 lead. A pair of kills from Gabi Moore helped cut the deficit to 15-16, a trend that was consistent in all three games.
A Brandi Howard block would tie the game at 19-19, but Clay City was able to take the game back over with a 24-20 lead following a serving error by the Lady Eagles.
A point away from losing the first game, Howard served a clutch 5-0 run to win the first game, 26-24, thanks in part to a game-winning kill from Moore.
The second game was much of the same for the Lady Eagles, as they fell down to an early deficit. However, despite a 1-1 tie following a kill from Moore, Clay City would not trail at any point in the second game.
SEB managed to cut the Clay City lead to 18-20 following an ace from Madison Carson, after trailing by as much as seven. But, the Lady Eagles could not pull of the same type of comeback they managed in the first game, dropping the second game, 25-22.
With the season on the line, both teams battled back and forth in the third game. A kill from Howard brought the third game to an 8-8 tie.  But, a 4-0 run by the Wolves gave them back a 12-8 lead.
Both teams tried to maintain focus as the gym was packed with loud, enthusiastic fans, something Asher said her team expected.
“It was a very loud gym; we have been in a few like this already this year.  We knew it would be loud and a little bit hostile, so we were prepared for that,” Asher said. ”I think the kids focused really well and didn’t let that get into their heads or bother them.”
The Lady Eagles continued to battle, as Howard was able to come up with another game-tying kill to bring the score to 14-14. Clay City responded with a block from senior Peyton Spitzner to take the lead, one they would not relinquish.
Down and seemingly out, the Lady Eagles were able to rally from a 24-17 deficit, but could not repeat the first game performance as they came up just short of the comeback. Clay City senior Paige Spitzner delivered the game and match-winning kill to capture the regional championship.
Despite coming up just short of advancing to the sectionals, Asher was proud of the way her team fought from behind most of the match.
Gabi Moore had a team-high 10 kills and 15 digs, along with one ace. Other scorers were Emily Bone, with four kills and six digs; Kandice Beshel, with eight digs; Madison Carson, with one kill, one ace and nine digs; Brandi Howard, with seven kills, six digs and two blocks; Sarah Maxey, with a team-high 26 assists, one ace and 10 digs; and Tessa Philpot, with three kills, one ace, 11 digs and one blocked assist.
“It was a battle all the way through.  We got down a couple of different times and battled back. Just a huge compliment to my seniors out there, who lead the team and never gave up, just made plays when they needed to,” Asher said.  “Clay City had some good hitters and got a couple balls down when they needed it. We served well tonight. I have no qualms with our play. I think we played great, but we just came up short.“
The loss brings the Lady Eagles season to an end, finishing 23-13.  They will be tasked with replacing six senior members for the 2016 season. However, that is not something Asher wants to focus on just yet.
“It’s always a challenge every year, but we just want to honor them for a little bit longer. We don’t have to really think about replacing until next spring,” Asher said. “Our underclassmen work hard, they understand the system and they are prepared to take on the challenge when they are presented with the opportunity as well. “ 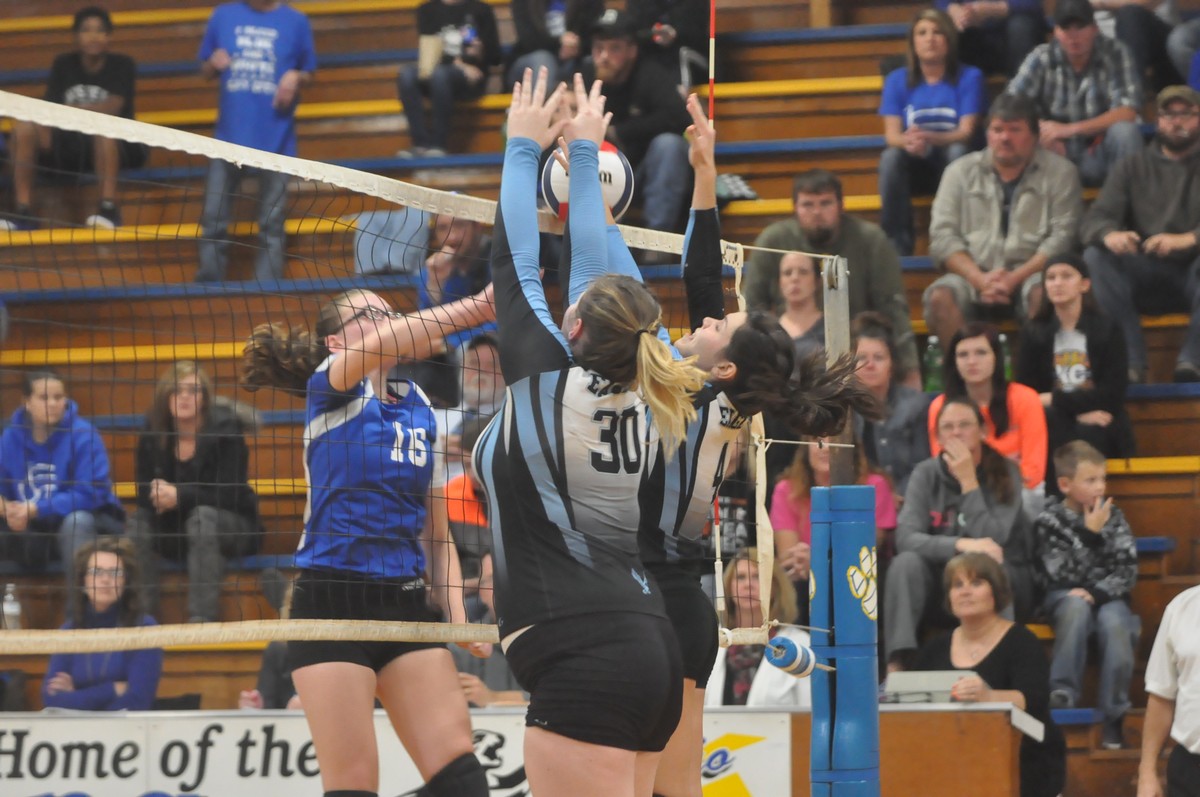 SEB’s Brandi Howard and Sarah Maxey battle at the the net with Clay City’s Tori Matanich. 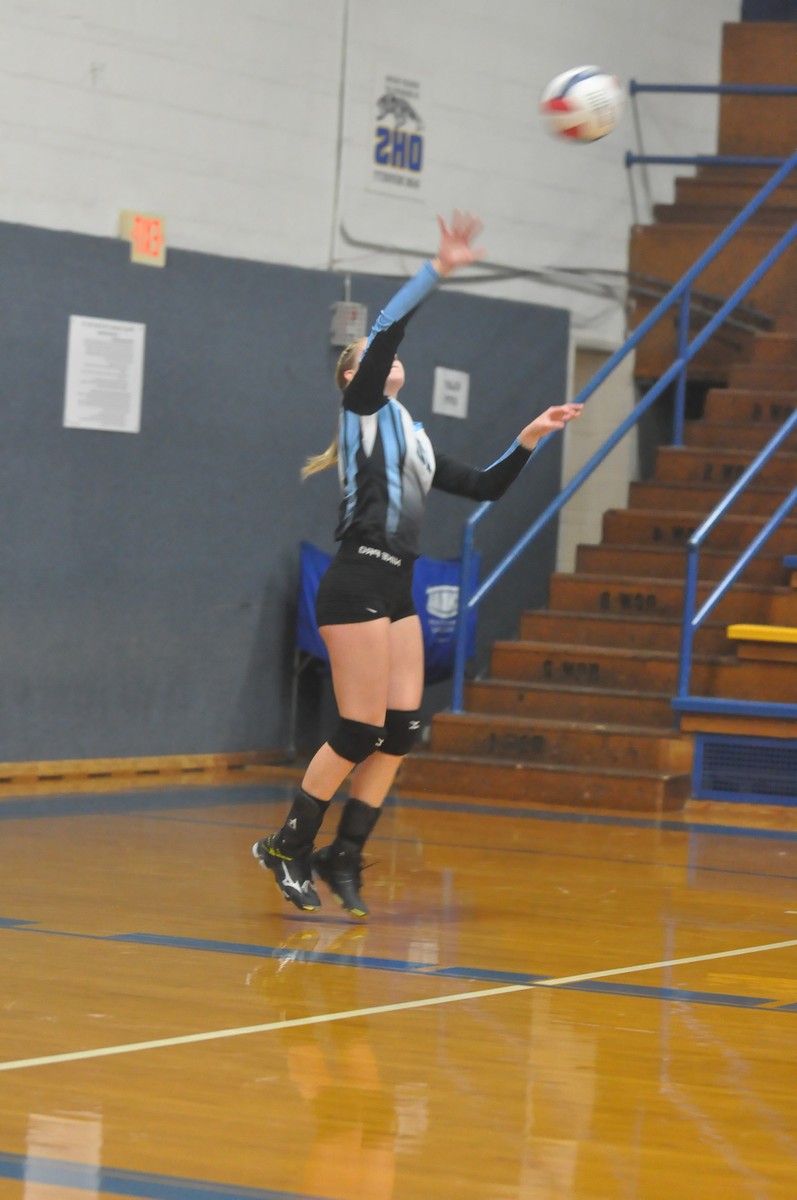 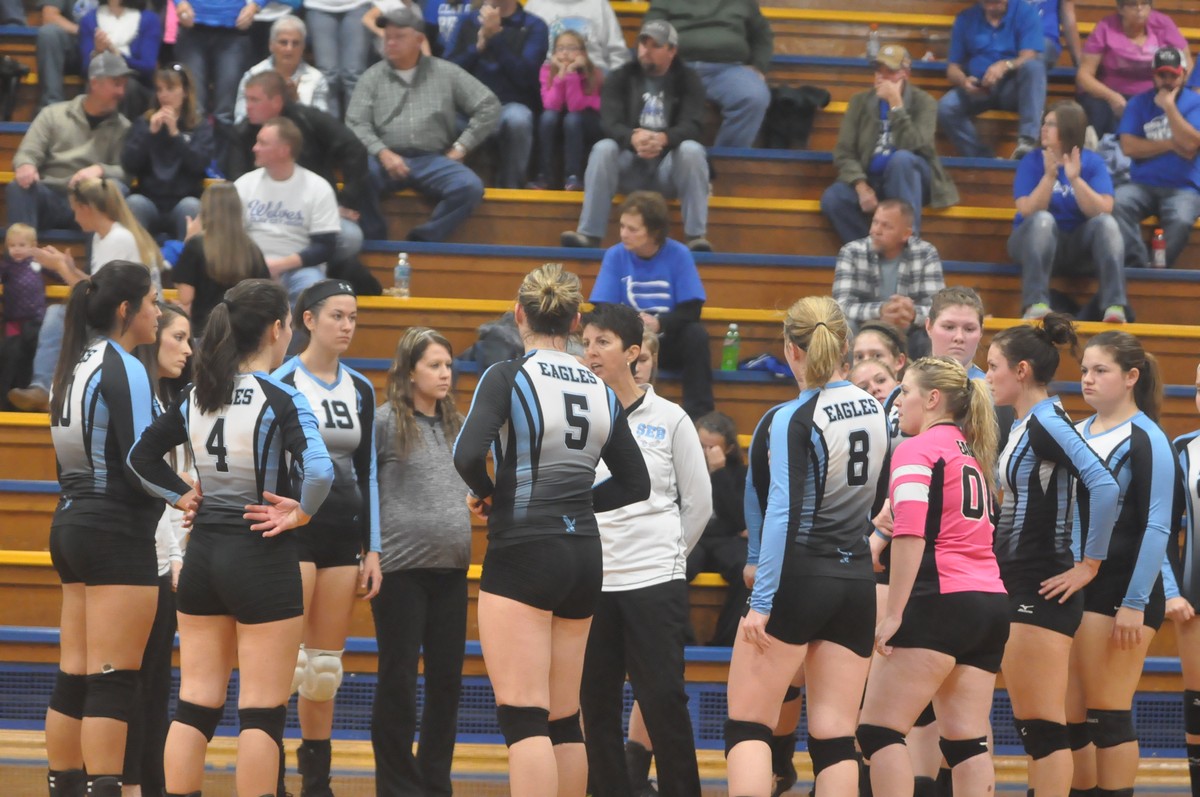