The Vandalia High School football team closed out what was an up-and-down season last Friday with a heartbreaking loss to Greenville, 50-49.
While falling a game short of making the playoffs was not the ideal way to finish out a season, the Vandals did have their fair share of success throughout the 2015 campaign.
The Vandals picked up a big win over Carlinville in week two, who finished second in the South Central Conference, as well as shutout victories over Staunton and Piasa-Southwestern.

GAME-BY-GAME RECAPS
Gillespie
Vandalia opened up the season with a conference showdown with the Gillespie Miners.  The Vandals struggled with turnovers in the contest, losing three fumbles and throwing two interceptions.
Zimmerman provided the lone offensive score on a 37-yard touchdown reception from Well.
The Vandals were held to 177 total yards on offense, 80 yards rushing and 97 passing. Meanwhile, the defense conceded 369 yards to the Miners, 155 passing and 214 rushing.

Carlinville
Any doubts about the Vandals were erased in week two, as they topped the Carlinville Cavaliers, 27-18.
Early miscues from the Cavaliers proved to be crucial. Vandals senior kicker Boaz Haveman closed out the first half with a 22-yard field goal, giving Vandalia a 24-0 halftime lead.  Haveman finished the game a perfect 3-for-3 on PATS and 2-for-2 on field goal tries.
Bradley bounced back from a less-than-stellar showing at Gillespie, finishing with 118 yards and two touchdowns.

Staunton
Vandalia continued its solid play in week three, dominating the Staunton Bulldogs, 43-0.  It marked the first shutout for the Vandals since 2012.
The Bulldogs were able to keep the Vandals from pulling away in the first half, entering halftime down, 16-0. However, the second half was a different story as the Vandals scored 27 unanswered points.
Well did it all in the shutout, returning a blocked punt 50 yards for a touchdown to go along with 140 yards passing and two touchdowns.
The Vandals’ defense held the Bulldogs to just 70 yards of total offense in the shutout effort.

Roxana
The Roxana rushing attack proved to be more than the Vandals’ defense could handle, finishing the game with 430 rushing yards en route to a 36-14 win.
Touchdown runs of 30 and 13 yards from Bradley would provide all the offense for Vandalia. Roxana’s Blake Vandiver and Jordan Hawkins combined for 308 yards rushing and three touchdowns.

Litchfield
Vandalia attempted to spoil Litchfield’s homecoming in week four, but fell just short on the final drive of the game.
A rushing touchdown from Litchfield’s David Seabaugh gave the Panthers a 12-7 lead with 1:33 to play. Well led his team deep into Panther territory, but was tackled at their 7-yard line as time expired.
Junior Cody Phillips provided Vandalia with its only points on a 15-yard touchdown reception from Well.

Hillsboro
The Vandals hung on in a crazy fourth quarter to top Hillsboro, 35-28, and bring their record to an even 3-3.
Vandalia took a 28-6 lead with 4:58 left in the third following a 55-yard touchdown pass from Well to Bradley.  However, two straight touchdowns from the Toppers brought them within eight.
Moore stopped the comeback with a 78-yard kickoff return for a touchdown. The Vandals’ defense conceded one more Topper touchdown but ultimately held on for the win.
Well turned in one of his best games of the season as he finished with 203 yards passing and two touchdowns.

Piasa-Southwestern
Vandalia picked up its second shutout win of the season in a homecoming matchup with Piasa-Southwestern.
The Vandals picked up its first points in the second quarter, as Zimmerman hauled in an 84-yard touchdown pass from Well.
A couple of Bradley touchdowns in the third quarter would be more than enough offense, as the Vandals came away with a 25-0 win.

Pana
Vandalia was tasked with facing an unbeaten Pana Panthers squad in week eight. In what was the Vandal seniors' final home game, they came up just short in a 21-13 loss.
However, it was a valiant effort as Pana was held to its least amount of points all year.
A 1-yard touchdown run from McNary managed to give the Vandals a 13-7 lead with 4:38 in the second. However, a pair of 16 yard touchdown passes from Pana quarterback, Rhett Zahradka would be enough for the Panthers to stay unbeaten, as both teams failed to score in the second half.
Bradley found success against the tough Pana defense, finishing the game with 31 carries for 171 yards and a touchdown.

Greenville
Vandalia traveled to Greenville in the final week of the regular season with a chance to clinch a playoff berth.  However, Greenville delivered a 12-yard touchdown pass with only eight seconds remaining in the game to pull off a heartbreaking 50-49 win.
Bradley left it all on the field in the offensive shootout, finishing the game with 31 carries for 227 yards and three touchdowns.  Jones and McNary rounded out the rushing attack with 118 and 45 yards, respectively.

A look ahead
Vandalia head coach John Stout will be faced with the difficult task of replacing seven starters on offense, along with eight starters on defense.
Some key returners for the 2016 season will be quarterback Richie Well, wide receiver/defensive back Marcus Zimmerman, linebacker/running back Kelly Jones, linebacker Logan Sullens, offensive lineman Kolton Kaiser. 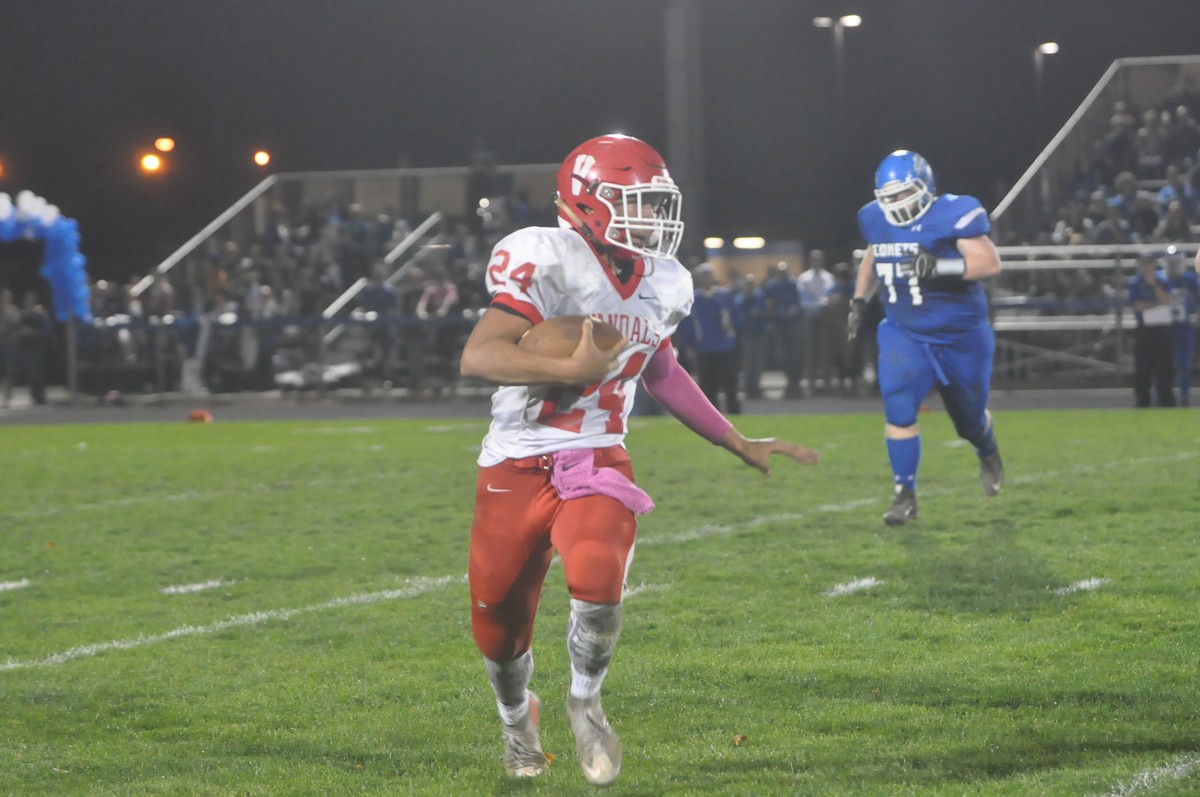 Kelly Jones finished the season with 77 carries for 404 yards, along with 13 receptions for 176 yards and two touchdowns. 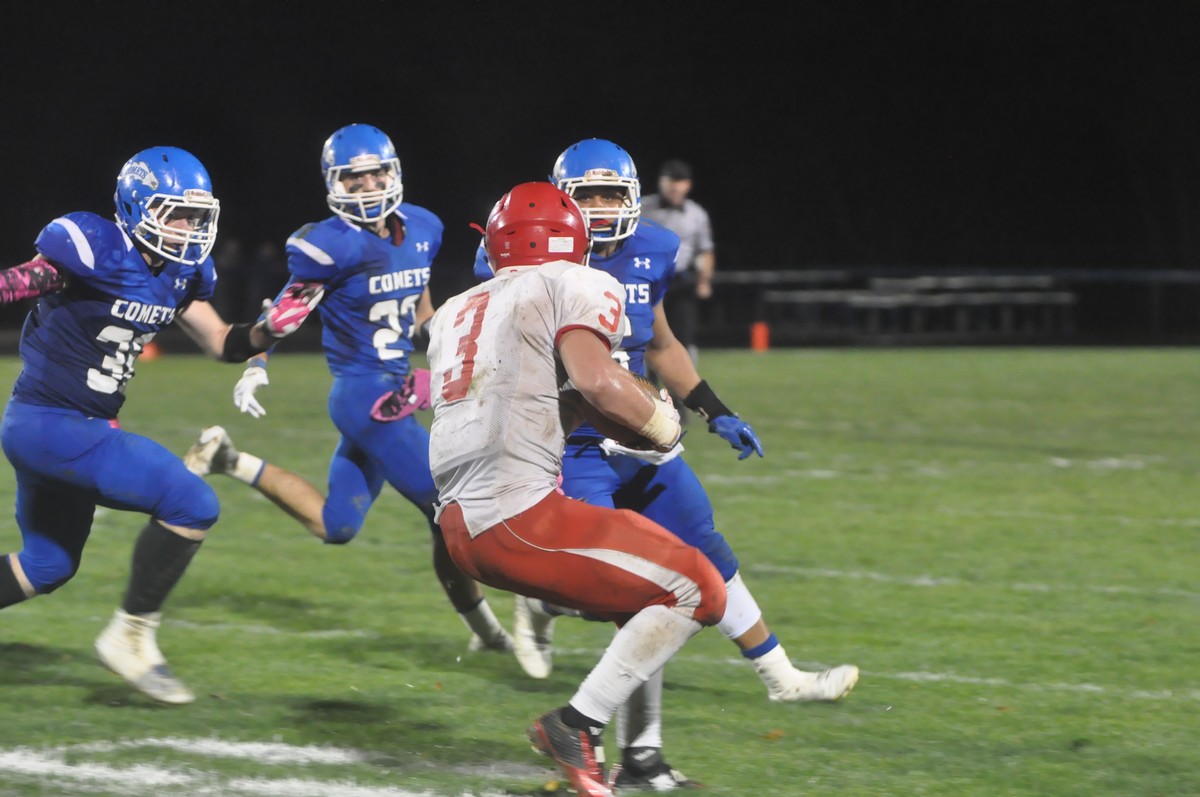 Bobby Bradley finished his senior season with 190 carries for 1,107 yards and 12 toucdhowns.

Richie Well completed 47 for passes for 919 yards and nine touchdowns along with one rushing touchdown in 2015.