VANDALIA – Vandalia came painfully close to clinching its second consecutive playoff berth Friday night, but came up just short as they fell to an undefeated Pana squad, 21-13, in what was the last home game for the Vandal seniors.
Head coach John Stout praised his seniors who were honored prior to the game as part of senior night.
“They’re just great. Go back to when they were sophomores and we just threw them in there into the fire. They struggled through a rough season and got into the playoffs last year,” Stout said. “We're still in a position to make it this year. They really wanted to clinch it on the home field here and defeat Pana. Their effort was one of the best we have had in a long time. “
Coming into the game, Pana had allowed only 33 points en route to its 7-0 record and conference championship.
However, the Vandals were not intimidated, as they stayed competitive throughout the game.
Pana received the opening kickoff, returning it to the Vandals 49-yard line. They drove to the Vandalia 29-yard line but the Vandals defense came up with a stop on a fourth and 10.
The tough Panthers defense forced a quick three and out as the Vandals were forced to punt, giving Pana the ball back at its own 45.
A bobbled snap and incomplete pass pushed the Panthers back to its own 37, but that would not stop them. Pana quarterback Rhett Zahradka connected with Adam Miller for a 63-yard touchdown, giving them a 7-0 lead with 6:37 in the first quarter.
Vandals quarterback Richie Well threw an interception on the ensuing drive, setting Pana up at the Vandalia 37 yard line.
However, the Vandals defense came through, stopping the Panthers on a fourth and seven.
From there, the Vandals offense was able to find success running the ball up the middle, using a combination of Bobby Bradley and Kelly Jones. Bradley capped off the 10-play, 66-yard drive with an 18-yard touchdown run to tie the game up at 7-7 with 12 seconds in the first.
Vandalia continued its success on defense, forcing Pana to punt on the ensuing drive following a quick three-and-out, which set the Vandals up at their own 27-yard line.
Vandalia went right back to its ground-andpound running attack, converting a couple of crucial third downs to keep the drive alive. Bradley was able to push a pile of Pana defenders on a 9-yard gain to set Vandalia up at the Pana 4-yard line.
Garrett McNary finished off the drive with a 1-yard plunge to give the Vandals the lead. A missed PAT and Vandalia lead 13-7 with 4:38 left in the half.
Trailing for the first time all season, Pana responded immediately on the next drive. A 43-yard run from Zahradka set the Panthers up deep in Vandal territory. Two plays later, Zahradka connected on a 16-yard touchdown pass to give Pana a 14-13 lead with 3:06 left in the half.
A quick three-and-out from the Vandals set Pana up at their own 33-yard line. The Panthers put together another quick drive, highlighted by a 16-yard touchdown pass from Zahradka to Joe England, to extend their lead to 21-13 with only 29 seconds remaining in the half.
“Zahradka is a good quarterback for them. He kept the play alive a lot of times and made plays a lot of times. Miller is a great receiver and the first touchdown, he just split our two defenders there,” Stout said.
Pana’s defense came out revitalized in the second half, picking off a Well pass on the Vandals first possession.
However, the Vandals’ defense remained strong as well, forcing a turnover on downs to give themselves another shot at tying up the game.  The Pana defense answered, forcing a fumble with Vandalia at the Pana 7-yard line.
The defensive battle continued for the remainder of the half, as Pana was able to force a turnover on downs with the Vandals in the red zone once again.
A Vandalia fumble with less than two minutes left would allow the Panthers to run out the clock and win the game, improving to 8-0 on the season.
“We have seen them on film and I know how far we have come on the last three or four weeks. I thought we could take the ball right at them and we did,” Stout said.  “Give their defense credit though, they needed two stops down there in the fourth quarter and they got it. They have given up 33 points all year. They showed why they’re a good defense. When they needed to, they made the plays”
Stout went on to praise his team for matching the physicality of the Pana defense and battling the unbeaten team all the way until the end.
“I thought, physically, Bobby broke a lot of tackles and Kelly ran well. I just thought our line blocked really well and the guys gave everything they had and came up just short. “
Vandalia will look to rebound from the tough loss, as they close out the regular season this Friday at Greenville with a shot to clinch a playoff berth for a second straight year. The game is scheduled to start at 7 p.m.
“They are a little down now, but I think they will rebound,” Stout said. “That’s what we talked about out here in the huddle – think about what it will be like next Friday at 9:07. We're going to be celebrating over there (Greenville) on their field.”
Game Stats- Vandalia compiled 277 yards of offense against the Panthers, 276 rushing and only 1 passing.
Bobby Bradley headed the rushing attack, finishing the game with 171 yards on 31 carries with a touchdown.  Kelly Jones had 84 yards on 17 carries while Garrett McNary finished with 7 yards on three carries and a touchdown.
Richie Well completed 1 of 8 passes for 1 yard and two interceptions. He also added 15 yards rushing on two carries.
Defensively the Vandals allowed 336 total yards- 228 passing and 108 rushing. 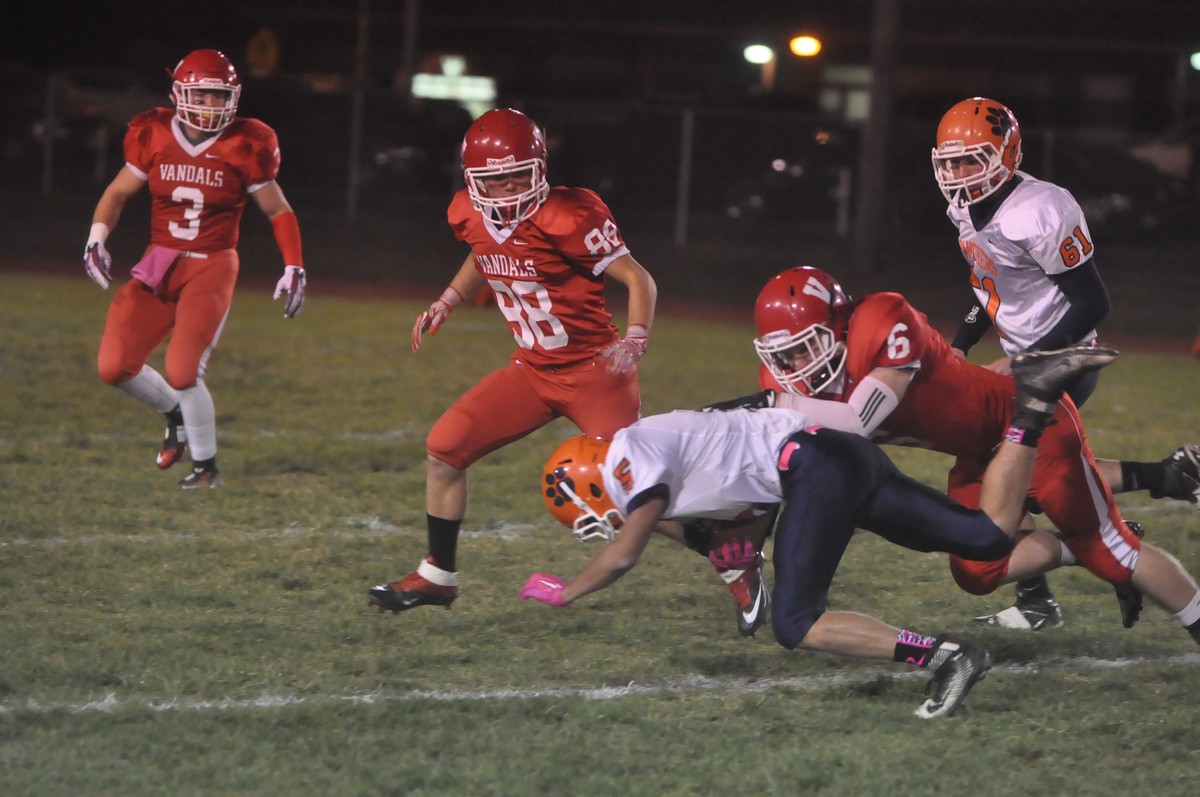 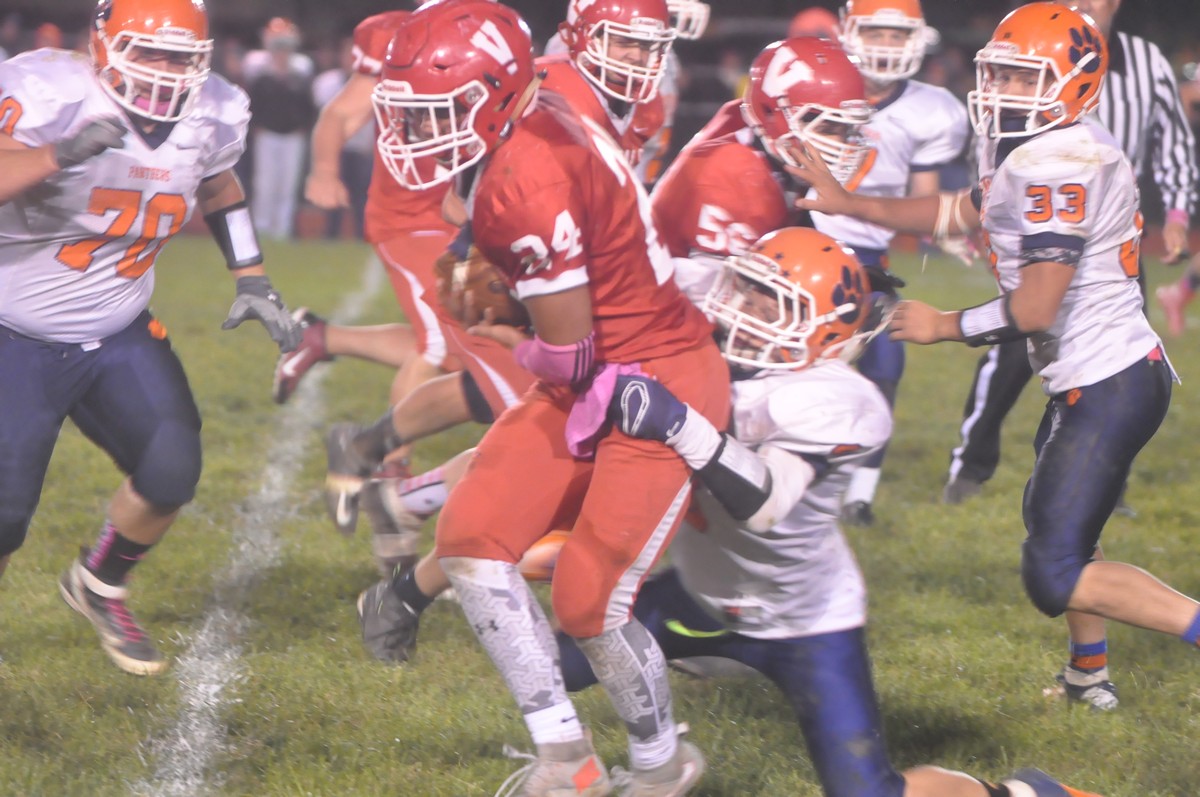 Kelly Jones is dragged to the ground by a Pana defender Friday night. Jones finished the contest with 17 carries for 84 yards, as the Vandals fell to Pana, 21-13