VANDALIA- After falling to 2-3 on the season with a 12-7 loss at Litchfield, it looked like the Vandals were in danger of missing out on a second-consecutive playoff berth.
However, an improved passing attack and strong defensive play the past two weeks has helped spark Vandalia’s current two-game winning streak, putting the Vandals a win away from becoming playoff eligible.
The Vandals’ defense stepped up early Friday night, forcing three turnovers on downs, with Southwestern in Vandalia territory on each one.
“(It was a) great job by our defense. Southwestern could have scored a couple times in the first quarter and the defense held them off, and I think it frustrated them a little bit,” Vandalia head coach John Stout said.
Vandalia’s first two drives ended with a turnover and a punt, but the third turnover on downs for Southwestern seemed to spark the offense.  Richie Well took advantage of Southwestern’s tight one-on-one coverage against Marcus Zimmerman, connecting with him on an 84-yard touchdown pass.
“Every time they have trips they pull the free (safety) over to the third receiver and leave the backside guy one-on-one. They were up tight on him and Marcus can make them pay when you do that,” Stout said.  “It was a great throw by Richie, and Marcus turned at the right time, got it and outran everyone. That’s flashes of what we saw a lot from him last year.“
A bad snap on the PAT was salvaged by Kelly Jones, who was able to run it in, giving the Vandals an 8-0 lead with 10:47 left in the first half.
With Southwestern driving into Vandal territory to close out the half, Vandalia’s defense came up big again. Well intercepted a Caleb Robinson pass, returning it to the Southwestern 40 with less than a minute to go in the half.
Zimmerman’s second catch of the game, a 35-yard pass from Well, set the Vandals up for a 22-yard field goal from Boaz Haveman, giving them an 11-0 halftime lead.
“To me, the huge play was Richie’s interception right before the half and got us a field goal to go up 11-0,” Stout said.
Vandalia carried its offensive momentum into the second half, engineering an 11-play, 65-yard drive, highlighted by a key fourth-and-five conversion by senior Bobby Bradley.  Bradley capped off the drive with a 1-yard touchdown plunge to extend Vandalia’s lead to 18-0 with 7:10 in the third.
Southwestern continued to dig itself a hole on its next offensive possession, fumbling the ball and setting the Vandals up at the Southwestern 30.
Vandalia wasted no time, scoring on a 30-yard Bradley run two plays later, pushing its commanding lead to 25-0 with 4:57 in the third.
That would prove to be more than enough to hold off Southwestern, as the Piasa Birds were unable to put together any consistent offense all game en route to the 25-0 loss.
“It’s been a while since all three–our lineman, our linebackers and our secondary–played well (at the same time). They threw the screens well, so we were hesitant to blitz our linebackers. The fullback started to get some yards, so we blitzed our backers. I thought Enrique Jenner played the screen well,” Stout said. “What else can you say about our defense? They played great the whole ball game.”
The Vandals will need to continue their strong play of late, as they prepare for a match up with undefeated Pana at home this Friday at 7 p.m.
“We're home and its senior night. Our kids are playing with a lot of confidence since the Litchfield game. We were bruised and banged up that week,” Stout said. “The kids responded well at Hillsboro. They are just playing with a lot of confidence right now.“
Game Stats- Vandalia compiled 309 total yards offense Friday night, 133 passing and 176 rushing.
Leading the rushing attack was Bobby Bradley, who picked up 106 yards on 16 carries for two scores. Kelly Jones was able to provide a new look for the Vandals rushing attack, finishing with 58 yards on 11 carries, as he was given a few direct snaps throughout the contest.
“It’s just another away to get Kelly the ball. He’s been running pretty much sweeps, so now he got to hit inside a little bit and get some nice yards,” Stout said. “ Just trying give teams a different look. “
Richie Well completed 4-of-13 for 133 yards with a touchdown and interception. Zimmerman led all receivers with two catches for 119 yards and two touchdowns.
Defensively, Vandalia held Southwestern to 254 total yards of offense, 171 rushing and 83 passing, in the shutout effort. 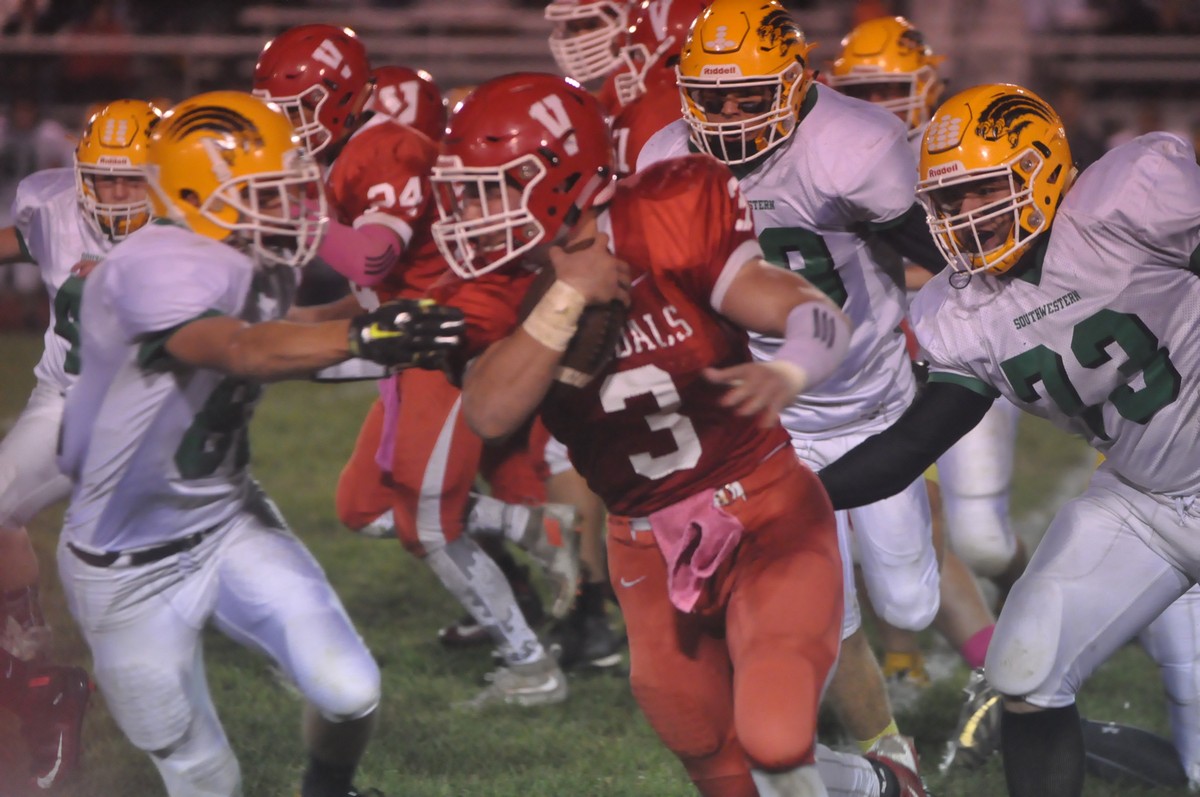 Bobby Bradley (3) turns to take a carry upfield Friday night as he attempts to avoid a group of Southwestern defenders. 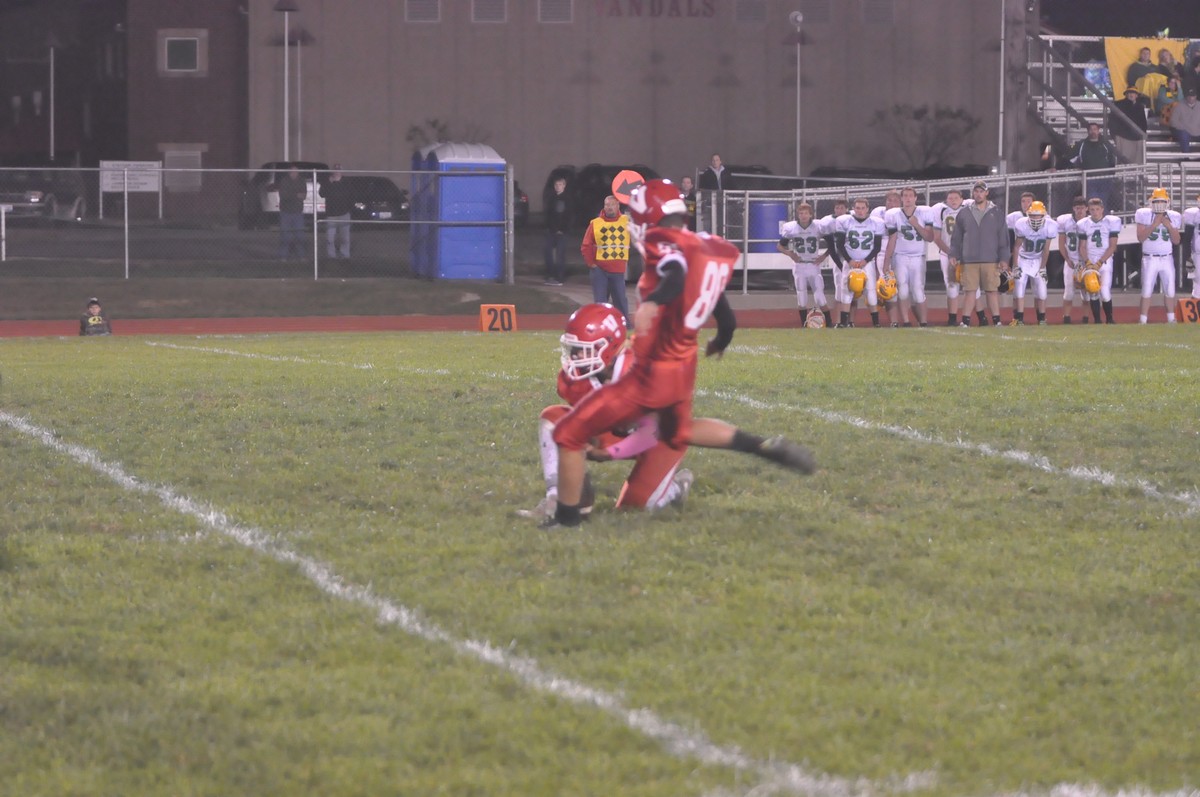 Boaz Haveman drills a 22-yard field goal to close out the first half Friday night.