The following was published in the Ramsey News-Journal in March 1981, having been sent in by Rose Stanfield Hawkins, who was 9 years old when her family arrived in Ramsey on Oct. 18, 1908.

Rose wrote that her mother, Nellie, would say, “This must be the most beautiful little town in the world.”
She wrote, “My father had accepted a position as bench chicken picker and ice packer for Lou Strobel, owner of Ramsey Poultry. Most chicken pickers were string pickers  … they were packed in ice for commercial shipping – this being wooden barrels readied for shipment to St. Louis via the ‘plug’ milk train daily.
“Ramsey then had two operating railroads, Illinois Central north and south division, Centralia to Clinton, and Cloverleaf, east and west, Charleston to St. Louis division. Stock pens stood at the intersection on the north side of the Cloverleaf and it was a common sight to see the pens loaded with beef and pork on foot daily.
“Going on north, a vacant lot where small traveling shows would set up during summer and fall seasons; then Aunt Sally Bolt Robertson (her son owned the News-Journal; 3 ¢ per copy); a residential building and Dr. E.P. Stapp’s home and emergency hospital. Ten beds and an operating room were on the second floor, the operating table, wooden with elevated head section and folding legs, most often called ‘the contrap-shun.’
“Crossing over to the left side (no street, either dust or mud), on the corner, the elementary school included third grade. Traveling on south, at the rear of the lot the jailhouse – a one-cell, one-window frame building. Seldom occupied and then was usually a passenger riding uninvited on the rails.
“Next, Strobel’s Meat Market (Hap’s father); Charlie drove the delivery buckboard, Fred beside the butcher block. Butchering was done at the slaughter house one mile north; then the IOOF hall; A.L. Whitten Grocery, Ramsey National Bank, Farthing’s Drugs (Mr. Bonney always had a créme candy drop for the youngsters).
“On south ,just across the street, the People’s State Bank, a vacant lot where later entertainment came when the nickelodeon was built; Williams Hardware; Perryman’s Millinery; Syfert’s Café; Thiele’s store; Nichols Barber Stop and the Handy Corner (Lindhorst), grocery and dry goods.
“Around the corner to the right, the Post Office; across the street the Hayes building – in it the Sharp’s Hardware, Shorty Prater Shoe Repair; latter added a café. On south facing the Illinois Central Railroad, the Carey House, the commercial hotel with a beautiful lawn. On west, across the ICRR tracks, the Ramsey Lumber Co., owned by the Wrights. Here, also, you ordered your coal.
“Meeting the locals each day was the Donaldson Dray Service. On both sides of the streets in the residential areas were maple trees with kerosene lights on the corner. These were lighted each evening by the constable, Mr. Mounts.
The News-Journal office was in the rear of the People’s State Bank, with the dentist office wedged in between.
Drs. Andrews, Staff and VanVranken were responding to house calls via buggy or horseback. Later, Dr. Fromm and Dr. Hayes came.
“Catholic, Methodist, Christian and Baptist churches welcomed congregations. Methodist, Catholic and Baptist churches were wooden structures. The telephone office, one block east of the Gray hotel in Mrs. Pedelupe’s home. This being a hand ringer with some lines having 22 subscribers. It was a mutual company owned by Sam and Fred Morrison. The operators were Orpha and Opal Harshman, Bertha King and Mrs. Pedelupe from 8 a.m. to 7 p.m. I had the pleasure of being there as an operator when the electric board was installed, around 1912. Every house had beautiful flowers and most also had a vegetable garden.
“In the John Hunter yard were on display monuments of various sizes. One and a half blocks south, the Gus O’Rear shop, where rabbits and junk brought in small change.
"Behind the livery stable was the blacksmith shop of Frank Wolf. Industry was McKnight’s Brick Yard, a fascinating place to be on School Visitation Day. Also, the ‘Apple House’ possibly employed 15 persons during the season.
“The School!  A two-story frame building with a brick one being built alongside. You studied and watched and then the big day when we moved into the new one.  Teachers were Ed Donaldson, Ella Lynch, Faye Smith, Emma White, Golda Wright and Mr. Hart.”
Without those such as Rose Hawkins, who took the time to record her impressions of Ramsey in the earlier times, an important part of our history would be lost. Rose was the eldest of three daughters of Lee and Belle Stanfield, the family moving to Ramsey from Clark County. Rose later married Rufus Hawkins and raised her two sons, Harry and Billy in Ramsey.
Once the family moved to Ramsey in 1908 they never left.  Why would they? After all, Rose’s mother thought it “must be the most beautiful little town in the world.” 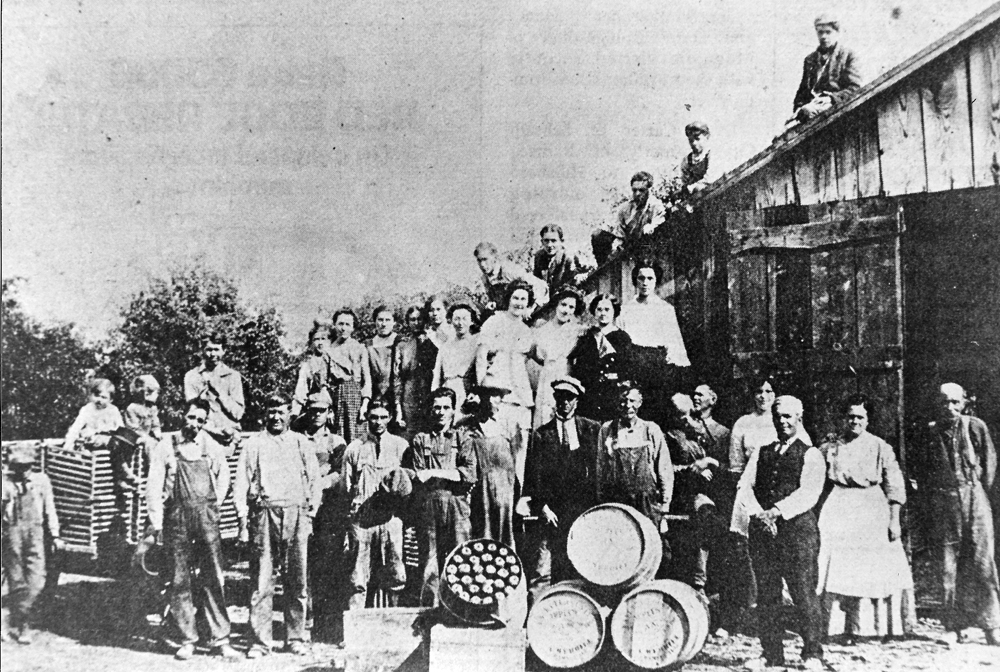