LITCHFIELD- Litchfield's late touchdown was too much for Vandalia to overcome, as it fell to its South Central Conference foe, 12-7, Friday night. The loss pushes the Vandals record to 2-3.
The Panthers were able to capitalize late, scoring on a 1-yard plunge by quarterback David Seabaugh that gave them a 12-7 lead with only 1:33 remaining in the game.
Vandalia quarterback Richie Well managed to lead the Vandals from their own 43-yard line deep into Litchfield territory, but ran out of time as he was tackled at the Panthers 7-yard line to end the game.
"We were just trying to come down the field there at the end, got stopped seven yards short," Vandalia head coach John Stout said. "We did a nice job of running the hurry-up, but they made some plays there at the end when they had to. You have to tip your hat to them on those last couple of        plays there."
The Vandals were able to run the ball for 233 yards, but failed to find any consistency throughout the game.
" They packed it in there tight. We did have some success getting it out there a little bit and trying to loosen things up," Stout said. "We just have to put the ball in the end zone more than that."
The game opened up with both teams squandering the few first-half opportunities they were presented with.
The Panthers were able to get down to the Vandals 16-yard line, but a fumble, recovered by Bobby Moore, ended their second offensive possession.
Litchfield came close to scoring once again early in the second quarter, getting down to the Vandals 9-yard line. However, a bobbled snap on a 26-yard field goal attempt ultimately cost the Panthers their first points of the contest.
The Vandals got their best scoring opportounity late in the second quarter as they were able to recover Litchfield's second fumble of the game, at the Panthers 37-yard line.
Vandalia was stalled at the 23-yard line, setting up a 40-yard field goal attempt by Boaz Haveman. Haveman missed wide left to close out the second half at 0-0.
Litchfield came out stronger in the second half, quickly forcing a Vandalia fumble, recovering at its own 43-yard line. It took the Panthers only three plays to march 57 yards down the field, scoring on a six-yard run from running back Conner Simmons. A failed two point conversion and the Panthers led 6-0 with 10:02 left in the third quarter.
The Vandals found themselves with another good scoring chance early in the fourth quarter, following a punt return to the Panthers 42-yard line. A defensive face mask call proved crucial, giving Vandalia a first down after what appeared to be a failed fourth-down conversion.
The Vandals took advantage, finishing a nine-play, 42-yard drive on a 15-yard touchdown pass from Well to Cody Phillips, his first reception of the season. A successful PAT from Haveman gave the Vandals the tight 7-6 lead with 6:56 left to play.
Litchfield started its next drive from its own 41-yard line and began to slowly march down the field.
A Vandalia offsides on defense proved costly as the Panthers were able to go from a fourth and 6 to a much more manageable fourth and 1 with less than three minutes to play.  They were able to push forward just enough on a quarterback sneak to convert.
Another quarterback sneak from Seabaugh, this time from the Vandals 1-yard line, returned the lead to Litchfield, 12-7, with just 1:33 left to play.
Vandalia came within 6 yards of spoiling Litchfield's homecoming, but ran out of time when Well was tackled as he scrambled for the end zone on the final play of the game.
Stout was able to take away a few positives despite the loss.
"I think the passing game opened up their in the second half. I think the defense played well," Stout said.
Vandalia will look to end its two game losing streak, as they travel to take on Hillsboro this Friday. The game is scheduled to start at 7 p.m.

Game Stats
Bobby Bradley finished the game with a team-high 121 rushing yards on 24 carries. Marcus Zimmerman finished with 46 rushing yards on seven carries and two receptions for 20 yards.
"He has got to get some more touches," Stout said commenting on Zimmerman's increased role. "He showed he can make some plays when he does. That’s something we will keep going to."
Kelly Jones and Richie Well rounded out the rushing attack with 30 and 36 yards, respectively.
Richie Well completed 9-of-15 passes for 79 yards and the Vandals lone score, a 15-yard pass to Cody Phillips. 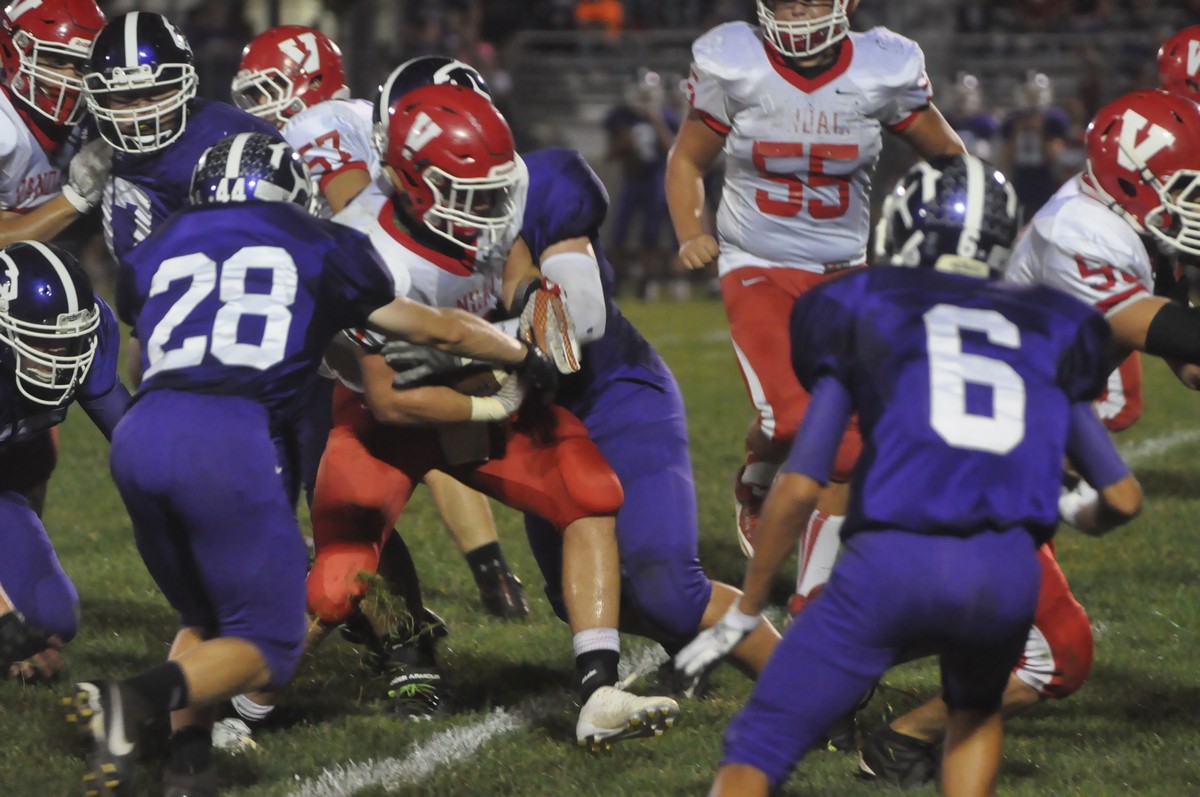 Bobby Bradley is wrapped up by two Litchfield defenders Friday night, with Kolton Etcheson (55) looking on. Bradley finished the game with a team-high 121 rushing yards on 24 carries. 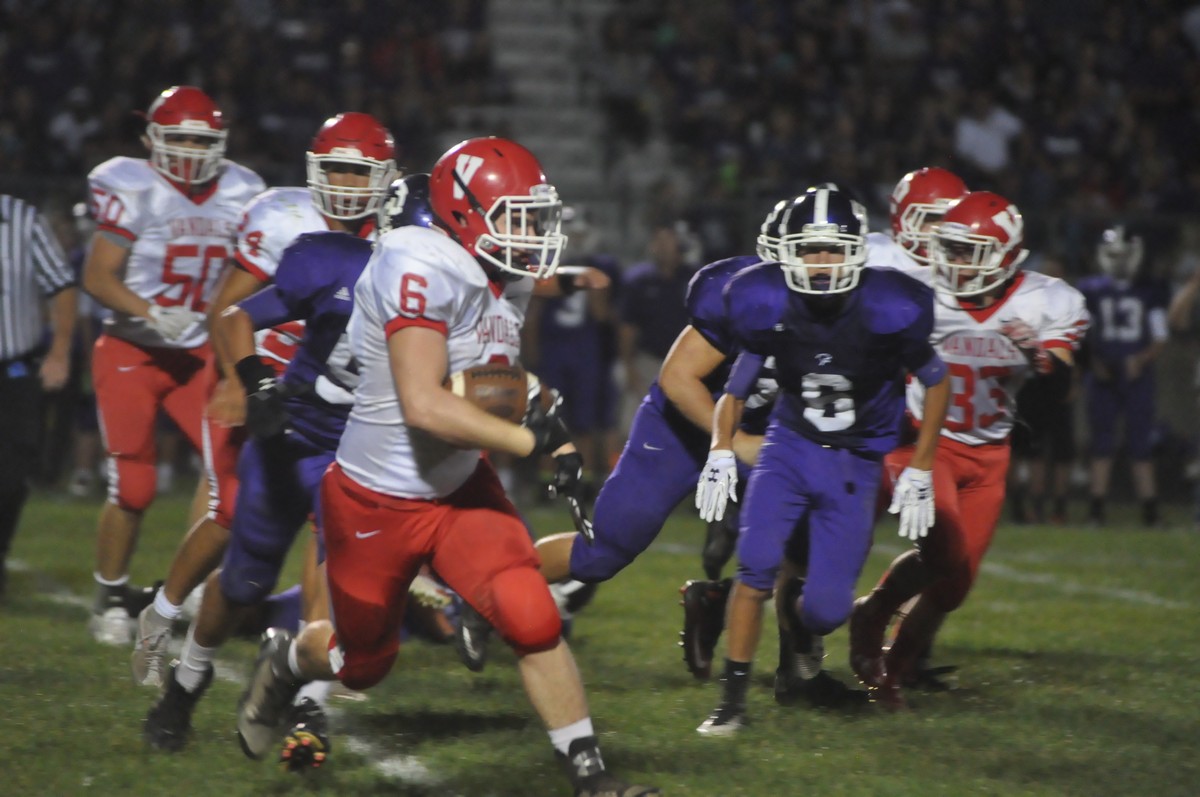 Marcus Zimmerman runs the ball outside trying avoid a Litchfield defender in Friday night’s loss. Zimmerman carried the ball for 46 yards on seven carries, both personal bests for him this season.