Some time ago, I was asked by John Coleman of Bond County if I would like to see an old ledger book of Asahel Enloe.

Enloe is an early figure in Illinois history, coming to Madison County, Illinois Territory in 1816 from York District, S.C.  He was a grown man with children when he made the trek west.
Two years after coming to the Illinois Territory, he settled with his wife, Sarah Stewart, and their children on the highest spot near Greenville, the current site of the old city cemetery.
The first entry in the Enloe ledger is dated 1817, when Illinois was still a territory, and is a deed between Simon Lindly and his wife, Ann, to John Lindly of Madison County, Illinois Territory. The 160 acres being deeded had originally been purchased for $80 at the Kaskaskia Land Office on April 4, 1816.
Many of the entries span two or more pages. In each case, when the landowner was married, his wife was taken apart from her husband and questioned whether she agreed to the sale of the land, because of her dower interest in the property.
Having spent years reading old script, and for history’s sake, I decided to take the time to transcribe this old 146-page ledger.
Many of the entries were more run of the mill – deed transfers and such – but the one that tore at my heart was the “Bill of Sale” for a 13-14-year-old boy named Spencer, formerly in possession of Green P. Rice, to keep to age 35.  Chatham Ewing of Logan County, Ky., is mentioned, and the witnesses were Robert Lathen and William B. Whiteside.
Perrin’s 1883 Bond and Montgomery County history said that Enloe settled near the spring with Paul Beck and Samuel Davidson, the three receiving first settler status.  Perrin’s history does not name Asahel as a justice of the peace, but the ledger proves that he held this office.
Asahel and his sons are credited with clearing off a tract of land near the courthouse square in Greenville, planting it in corn in 1818.
In addition to his wife, Sarah, his family included children Mary, Violet, Cynthia, Ezekiel, James, Hannah, Louisa, Enoch, Nathaniel and Isaac Enloe.
Illinois’ first governor, Shadrach Bond, appointed Asahel to a job as surveyor, a position he held for 40 years. He was described as a scholarly man for his time. He taught school, and was clerk and chorister at the Presbyterian Church for years.
During the years represented by this ledger, Asahel Enloe surveyed and platted the villages of Ripley and Perrysville (the first county seat of Bond County), and their plats are recorded in his Account Book.
Ripley was 24 blocks in size with a Public Square. All lots were 66 feet by 148 feet deep. Streets were 66 feet wide.  Written into the lower margin was “10 lots devoted for purpose raising funds for religious purposes and schools.”
Perrysville also had a “Publick Square” and streets named Niagary, Erie, Main, Eliot and Back.
At the time Enloe was employed drawing the survey, lot owners were I. Revis, Martin and Kerenhappuch T. Jones (they ended up owning most of the town), R.P. Winchester, F. Mason, William Jones, T. Finley, N. Buckmaster, J. Conway and Samuel Houston.
On page 6, the trustees of the Methodist Episcopal Church were granted part of the southeast quarter of Section 16, T 5 North, Range 3 West, “beginning at a stake near the spring northeast of the meeting house.” The church constitution and how it was to be conducted is included in the deed.
Many of the names in Asahel Enloe’s account book are also found in the early Bond County history books. Simon Lindly, mentioned above, came to Bond County in 1808 and built a blockhouse 1½ miles southwest of Greenville.  He also helped build both Hill’s Fort and Jones’ Fort.
James Denny’s will was recorded by Asahel Enloe on April 21, 1823. Genealogically, this is important because he named his wife, Mary, and his children: George, John, Polly, Jenny, James, Alexander, Robert and Samuel Denny.  Their descendants populate Bond and Fayette counties today.
This old ledger book is much more than a list of deeds, wills and bills of sale – it represents the beginning of recorded history of Bond County. 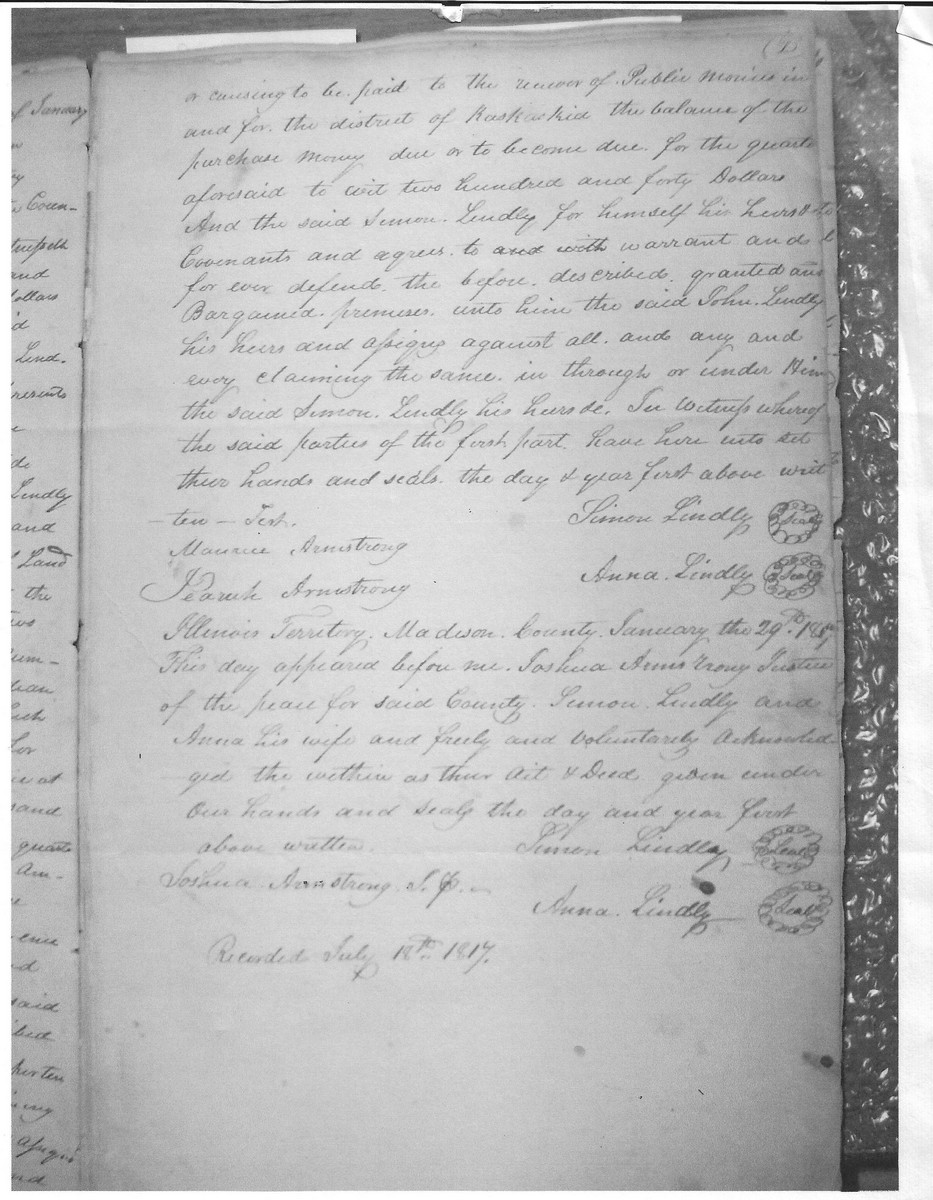 Pictured above is a photo of the first entry recorded in Asahel Enloe’s Account Book, 1817.