VANDALIA- The Vandals were firing on all cylinders in the home opener Friday night, capturing a 43-0 win over the Staunton Bulldogs. This marked the Vandals' first shutout win since 2012.
Bobby Bradley led the way as he continued his stellar play, finishing the game with 155 yards on 19 carries and two rushing touchdowns. He also added two catches for 82 yards and a touchdown. “Just another great performance by him,” head coach John Stout said. “He’s the guy that teams have to scheme to stop." The Vandals returned the opening kick to their own 36-yard line. From there, they were able to march down to Staunton’s 5-yard line.  Unable to punch it in, the Vandals settled for a 21-yard field goal by placekicker Boaz Haveman, giving them a 3-0 lead with 9:35 left in the first quarter.
Staunton was quickly stalled on the ensuing drive, as was the case most of the night for the Bulldogs, who finished the game with only 70 yards of offense.  However, they were able to intercept Vandal quarterback Richie Well on the Vandals second offensive possession.
Well redeemed himself on Staunton’s next possession, returning a punt blocked by Kelly Jones 50 yards for a touchdown, giving the Vandals a 10-0 lead with 2:37 left in the first.
“I thought all three phases were clicking, “ Stout said. “That hasn’t happened for us in a while.”
Vandalia’s defense continued its strong play in the second quarter, as senior defensive back Luke Tessman was able to come down with an interception late in the second quarter.
Tessman’s interception gave the Vandals their final possession of the half.  Well was able to engineer a nine-play, 77-yard drive, ending with a 12-yard touchdown throw to Kelly Jones, giving the Vandals a 16-0 lead into halftime.
“Staunton had a good scheme against us in the first half,” Stout said, commenting on the fact that the Vandals could only manage one touchdown on offense in the first half. “They loaded the box against us to try and force us to throw.”
The Vandals opened up the second half with a rare mistake, botching the kickoff and allowing Staunton to start its first drive of the second half from Vandalia’s 43-yard line.  However, Staunton could not capitalize on the good field position as they were stopped on fourth down.
Well took over from there, connecting with Bradley on a short screen pass that he took 65 yards for his first score of the game.  A failed extra point gave Vandalia a 23-0 lead with 2:22 left in the third.  Well finished the game 6-for-16 with 140 yards, two touchdowns and one interception.
Another Tessman interception on the following drive set the Vandals up at the Staunton 35-yard line.  Bradley capitalized, continuing his strong second half, as he was able to shake off multiple Staunton defenders en route to a 35-yard rushing touchdown. The score extended the Vandal lead to 29-0 with 2:22 remaining in the third.
Vandalia continued to pound the ball as Bradley ran for his second touchdown of the day, a 2-yard plunge putting the game even farther out of reach, with Staunton trailing 36-0 with 9:01 left to play.
That would be it for Bradley with the game essentially over. Sophomore running back Garrett McNary would provide relief, rushing seven times for 25 yards and the Vandals' final touchdown of the game, a 1-yard plunge with 3:35 left to play.
Senior Bobby Moore, who recorded six solo and three assisted tackles, led the strong defensive effort along with Tessman, who finished with two solo tackles and two interceptions.
“I thought our defense played really well,” Stout said.  “I thought Tessman played really well in the secondary.”
Vandalia will look to add onto its winning streak this Friday when they will host Roxana at 7 p.m.
Game Stats
Vandalia compiled 362 total yards of total offense (222 rushing and 140 passing).
Bradley ran 19 times for 155 yards with two scores, while McNary ran seven times for 25 yards with one score.
Jones and Logan Sullens each had three carries for 10 and 14 yards, respectively. Well and Moore each had one carry as well. Well completed 6 of 16 passes for 140 yards with two touchdowns and one interception.
Bradley led the receivers with 82 yards on two catches and one touchdown, while Zimmerman caught three passes for 46 yards. Jones also caught one pass for 12 yards with one touchdown.
Staunton combined for 70 yards of total offense (50 rushing and 20 passing.)

Game Notes—Vandalia moves to 2-1 on the season, placing them in a tie for second in the South Central Conference with two other teams.  After Bradley could only manage 43 rushing yards and no scores in the season opener at Gillespie, he has bounced back with a combined 273 rushing touchdowns and four rushing touchdowns in the past two games.
Staunton moves to 0-3 on the season, putting them in last place. They have only fielded six points and have allowed a staggering 142. 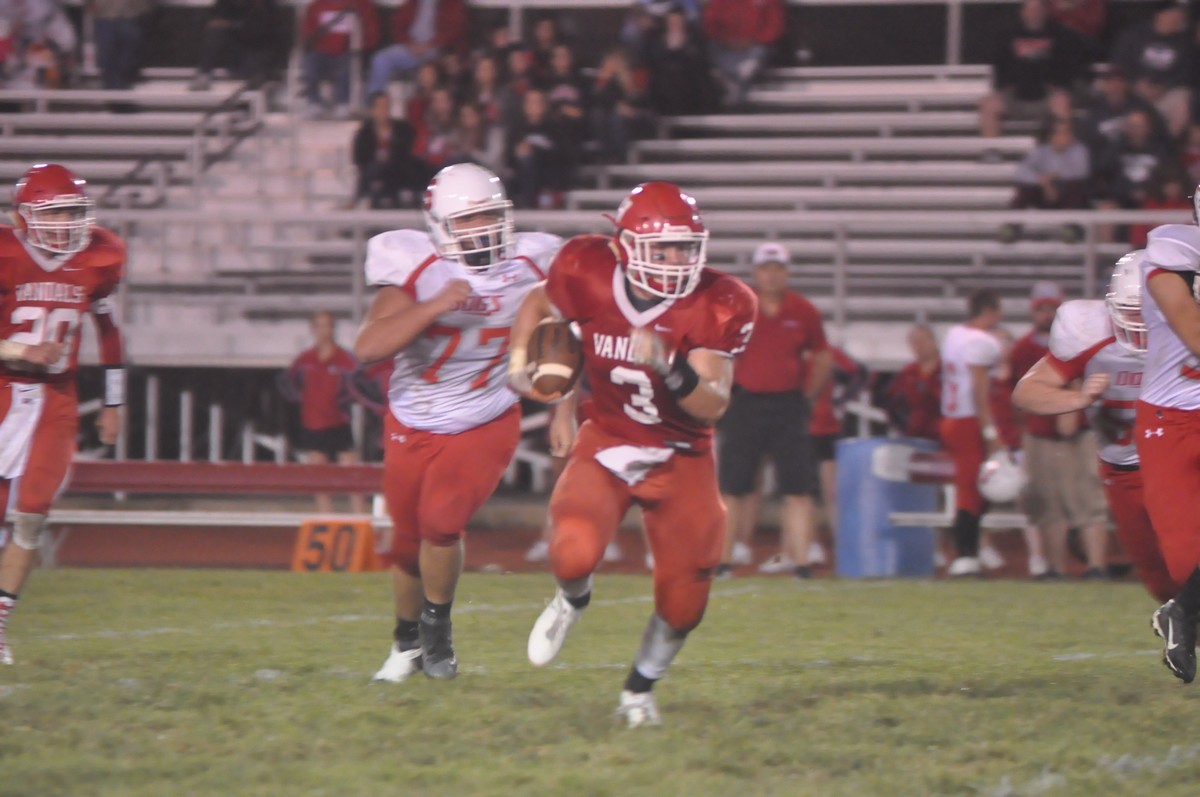 Bobby Bradley (3) breaks free to the right on his way to a 35-yard rushing score against Staunton Friday Night. 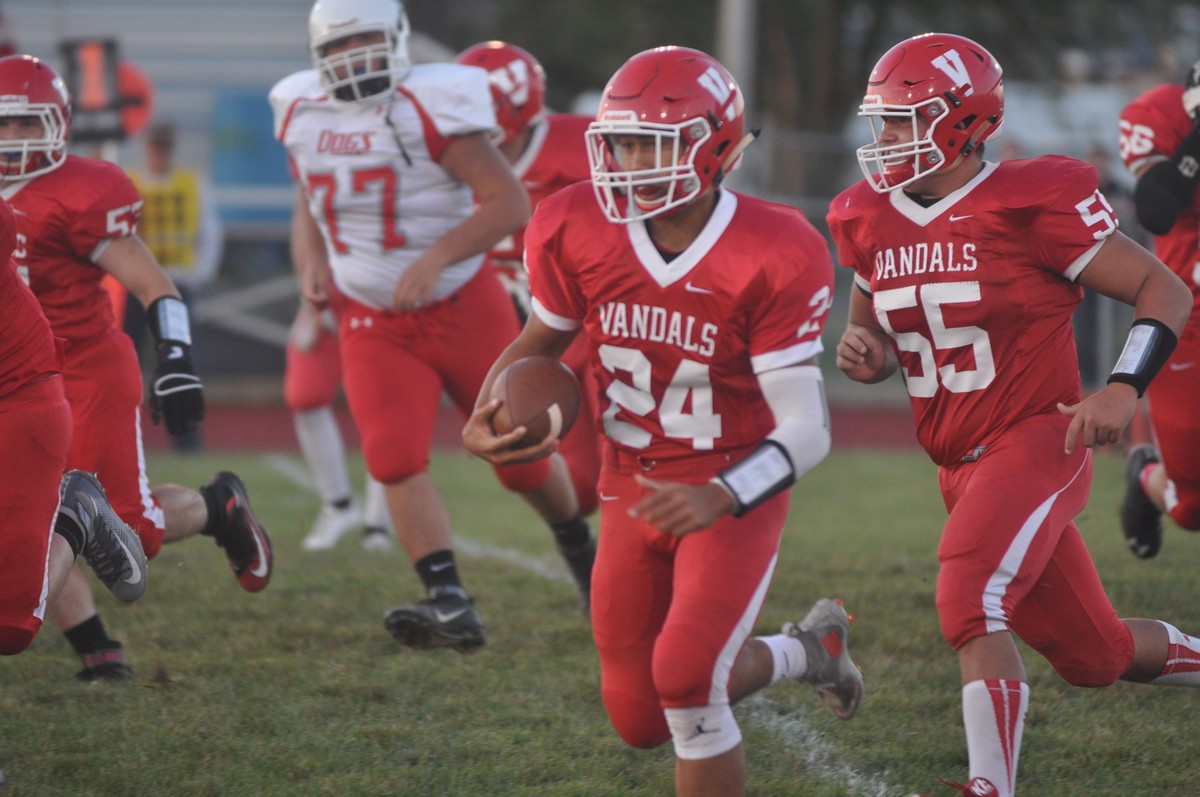 Kelly Jones (24) runs to the outside Friday night as Kolton Etcheson (55) trails behind. 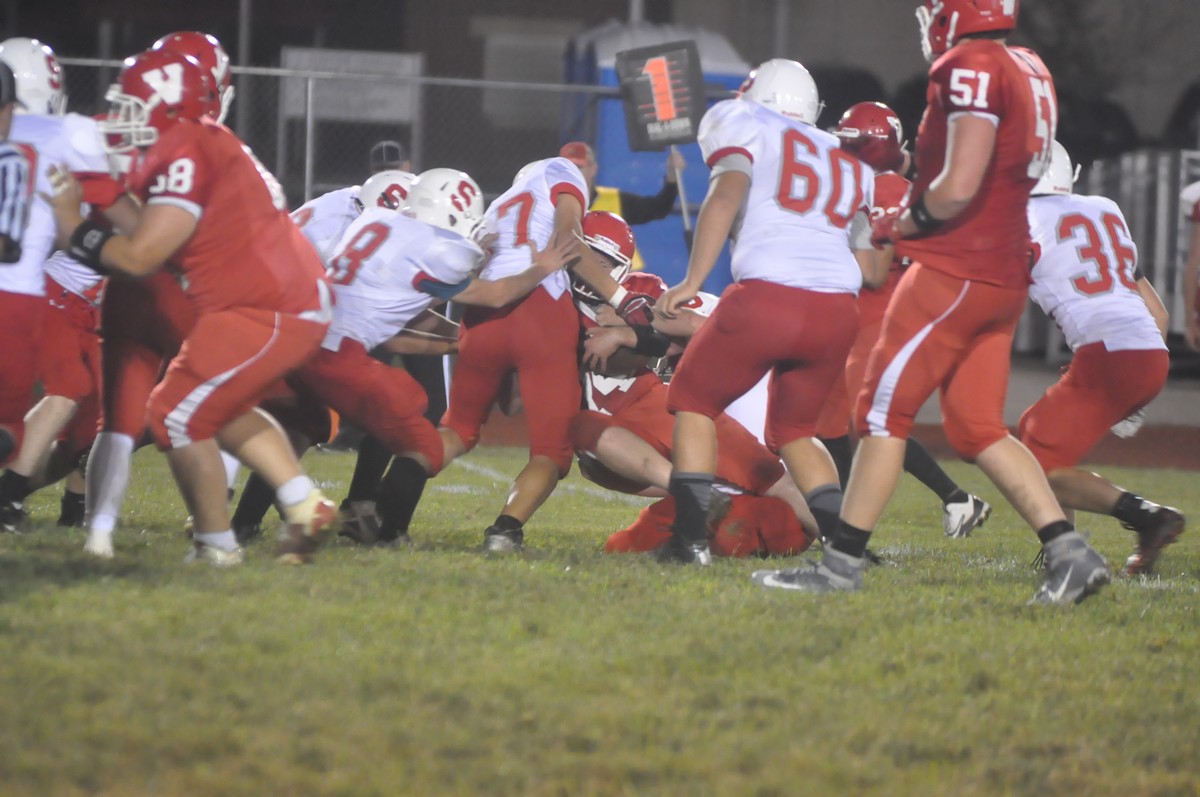 Garret McNary (14) plunges foward late in the fourth quarter Friday night with Ethan Bayles (51) looking on. McNary finished with 25 yards on seven carries and a touchdown. 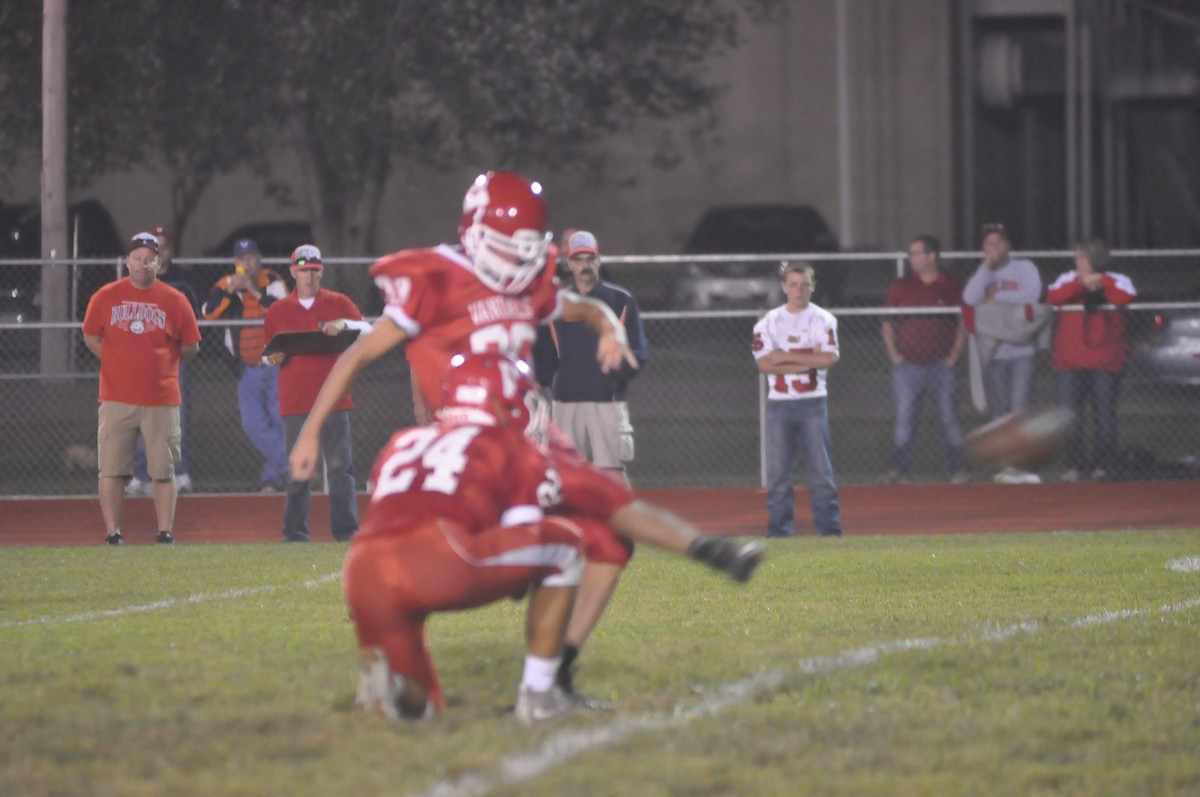