GILLESPIE-The Vandalia High School football team struggled with turnovers Friday night, falling to conference foe Gillespie, 28-6, in the season opener.
The Vandals showed signs of life early on, stopping the Miners on a 4th down early in the first quarter.  However, they were quickly stalled on their first drive and were forced to punt.
Gillespie would take over from there, scoring the games first points, connecting on a wide-open 77-yard touchdown pass. A missed extra point gave the Miners a 6-0 lead with 5:23 to play in the first.
“We let the guy scramble around the pocket, the play broke down and their guy kept running and our guys didn’t,” Vandals head coach John Stout, said. “We've got to play through the whistle.“
The Vandals offensive struggles continued on the next drive, setting them up for its second punt in as many drives. Gillespie capitalized with a 60-plus yard return to give them a second touchdown of the quarter and extending the Miners lead to 12-0 with 4:04 left in the first.
The Miners continued their strong defensive play on the Vandals next possession, forcing a Vandalia fumble setting the Miners up with decent field position.
The Vandals' turnover issues continued a couple drives later, throwing an interception to set Gillespie up on the Vandals 35-yard line early in the second quarter.
Gillespie took advantage of the short field, scoring its third touchdown of the half a few plays later on an eight-yard run. A failed two-point conversion and the Miners led 18-0 with 7:03 left in the half.
Another Vandalia fumble would culminate the first half turnovers, setting Gillespie up for a 36-yard field goal to give the Miners a 21-0 lead going into the half.
John Stout switched things up coming out for the second half, putting in junior quarterback Richie Well to replace Kelly Jones.
The move paid off immediately, as Well led an 11-play, 66-yard drive, capping it off with a 30-yard touchdown throw to speedy wideout Marcus Zimmerman cutting the Miner lead to 21-6 with 6:48 left in the third.
“We had trips formation and they rolled their safety over to the trips. Richie threw the ball nice and it was a nice catch,” Stout said. “In one-on-one coverage, that’s what we want to see out there."
However, that would be the extent of the Vandals success on offense, as they struggled to move the ball against a stacked box, forcing more throws than Stout’s wishbone offense is used to.
Gillespie would later score on a 32-yard touchdown run to extend the lead to 28-6 following a successful PAT.
That would be all the scoring for the second half as Gillespie would go on to win 28-6 marking its first win since the 2013-14 season after finishing 0-9 last year.
The Vandals will look to bounce back this Friday at Carlinville which won its season opener, 48-24, at Roxana. 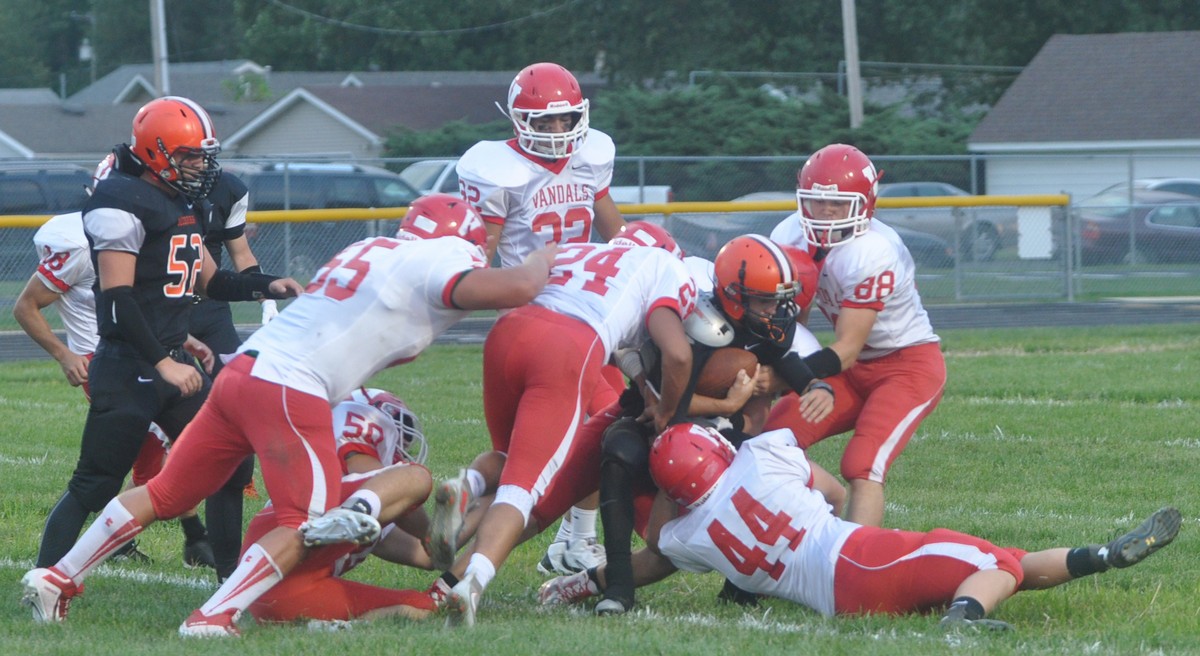 A group of Vandal defenders swarm the Gillespie player Friday night. The Vandals struggled defensively in the first half allowing 21 points, three touchdowns and one field goal, ultimately falling to the Miners 28-6. 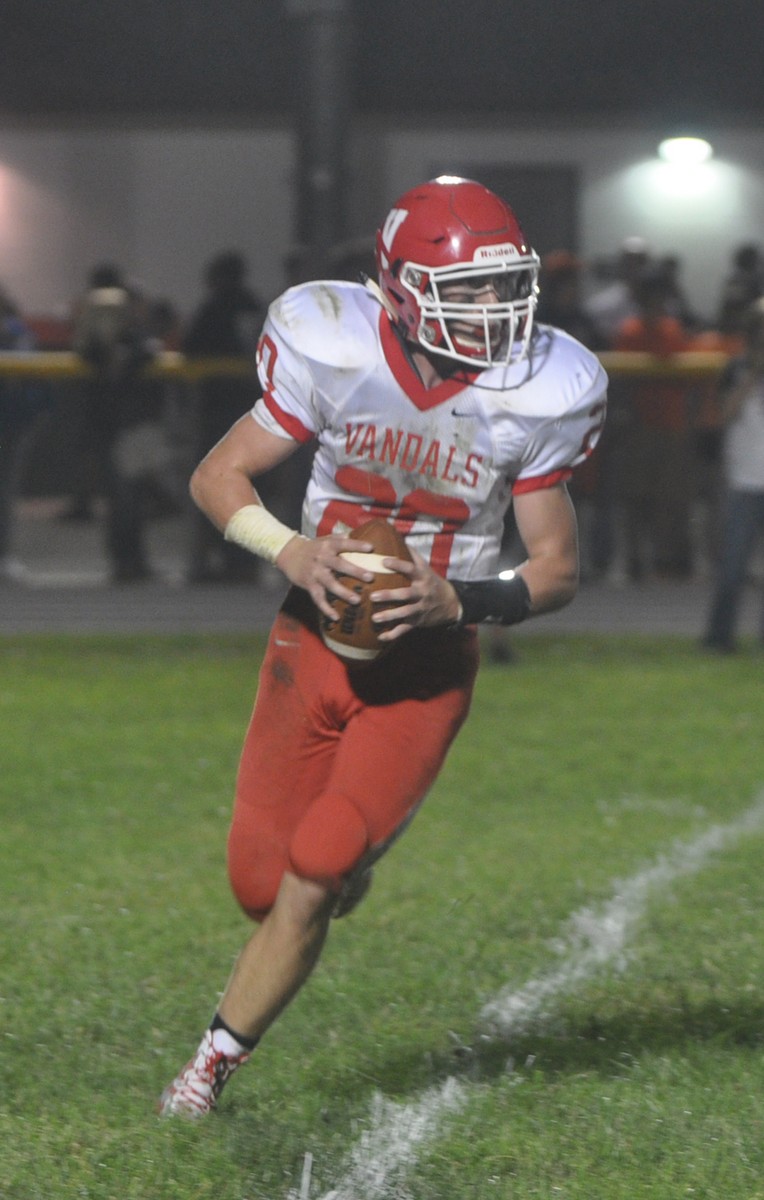 Vandalia quarterback, Richie Well, scrambles as he looks downfield. Well threw a 30-yard touchdown in the third quarter to give the Vandals their only points for the game.