This year’s extremely wet weather caused some Fayette County fields to be replanted at least once or twice, and some not to get planted at all.

A group of about 25 people participating in this year’s crop survey held by the Fayette County Farm Bureau's marketing committee knew that going in, and that they would have to consider that when estimating this year’s corn and soybean yields.
Prior to the survey, Farm Bureau Board President Ken Cripe asked the group of farmers, bankers and agribusiness representatives for input on just how to account for the vacant fields.
“This year is going to be a little interesting,” Cripe said, noting that having so many fields that did not get planted “has never happened before.”
One of the surveyors, James Lurkins said, “We’ve just got to use our best judgment.”
In the end, the group agreed to make notations of the vacant fields, as well as those that have large holes in them, while making estimates on those corn and soybean fields that have survived the tough growing season.
Six teams sampled about 50 corn and soybean fields, with the final estimates for the county being 140.37 bushels per acre for corn and 45.48 bushels per acre for beans.
The average yield estimates for the six survey teams are:
• Northeast – 145.89 for corn and 52.78 for beans.
• Northwest – 127.33 for corn and 42.44 for beans.
• Southeast – 135.40 for corn and 43.10 for beans.
• Southwest – 159.22 for corn and 47.44 for beans.
• East central – 118.9 for corn and 42 for beans.
• West central – 155.45 for corn and 45.10 for beans.
Corn yields on fields assessed by the surveyors ranged from 30 bushels per acre, in a field in the eastcentral part of the county, to 190 bushels per acre, in the westcentral part of Fayette.
The soybean range was 15-67, with the lowest being in the east central part of the county and the highest in the northeast section.
One team reported seeing 14 unplanted fields during the tour of their area.
Farmers in the county can expect the survey results to be pretty accurate, based on the comparison of past survey averages and final yield averages released by the U.S. Department of Agriculture.
In the 32 years of the survey, the yield average for corn has been 123.31 bushels per acre, while the USDA figure is 117.99.
For soybeans, the total survey average is 34.98 bushels per acre, while the USDA average is only slightly lower, at 34.93 bushels per acre. 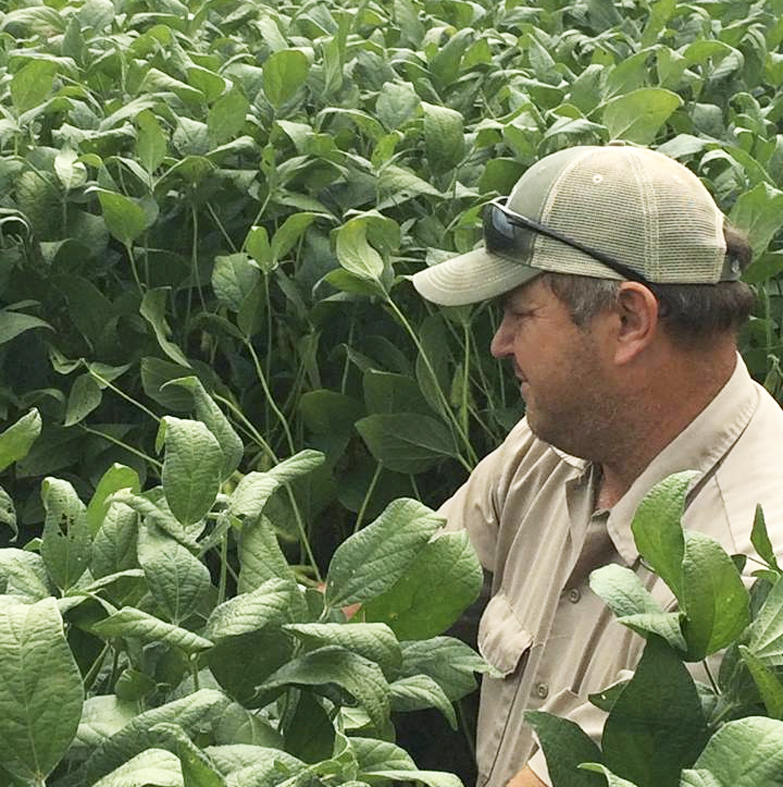 Craig Opfer gets down low to assess beans in a field, in a photo taken by another member of that crop survey team, Clayton Gathe.