Three individuals were taken to Fayette County Hospital for treatment, and two of them charged with offenses, following an accident west of Vandalia that closed the eastbound lanes of Interstate 70 for several hours.

According to the Illinois State Police-District 12, a preliminary investigation shows that a 1999 Ford Expedition driven by Bryan R. Giannini, 53, of York, Pa., was eastbound on I-70 when it crossed into the center median near the 57-mile marker, crossed back into the eastbound lanes and rolled over on its driver's side.

The Expedition was then struck by a 2015 Freightliner tractor-trailer driven by Jeremy D. Jackson, 40, of Springfield, Mo.

Both of the Gianninis and a juvenile passenger in their vehicle were transported by ambulance to Fayette County Hospital. 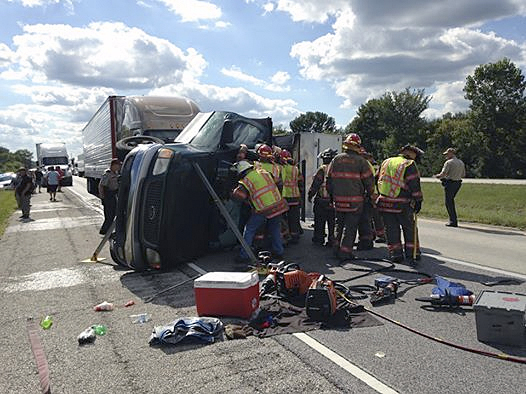