VANDALIA – Vandalia will look to continue making improvements after finishing the 2014 season 5-5, improving from a less than stellar 1-8 2013 season.
“I just think we just need to keep climbing the ladder, I think; two years ago our seniors were sophomores. They took their lumps and have gotten better,” Head Coach John Stout, said. “We're looking to do something big as far as contending for the conference championship and stuff like that. You know we have pretty high expectations.”
However, they will have to do so while replacing last year’s starting quarterback, Collin Nestleroad. Nestleroad provided a dangerous dual threat, finishing the 2014 campaign with a combined 1,961 yards and 23 touchdowns.
“Collin is going to be big shoes to fill there. Collin was a good dual threat guy, run the ball, pass the ball,” Stout said. “But we have Kelly Jones, who was a JV quarterback last year, and Richie Well, who’s played quarterback before, too. Each probably brings what Collin brought to the table, just together. It’s going to be hard to replace Collin, but I think we won’t be hurting there.”
Stout is still unsure as to who will take over the starting role.
“As of right now, I couldn’t decide who the starter would be. Each brings something different to the table,” Stout said.
Senior running back Bobby Bradley will play a crucial role in the Vandal’s success, coming into his third year as a starter.  The 6-foot, 200-pound Bradley dominated the ground attack in 2014, leading the team with 1,053 yards rushing and 14 touchdowns.  Coach Stout expects him, along with a couple other returning seniors to provide leadership for the Vandals this season.
“We have several seniors, Bobby Bradley is one, two-year starter, had 1,000 yards both years as running back” Stout, said. “Kendrick Woolsey is another guy starting a third year, Kolton Etcheson, so I look to those three guys early on to be our leaders.”
Woolsey returns to lead Stout’s 4-3 defense having recorded 14 tackles for a loss in 2014 at defensive tackle. Another player to watch out for this season is sophomore wideout, Marcus Zimmerman, who compiled 508 yards and 10 touchdowns in 2014.
“Zimmerman has a pretty high ceiling, after what he did last year as a freshman was pretty amazing when you think about it,” Stout said.
“He’s going to be moved around, he’s going to be a wideout, and he’s also going to be a running back.
"I think he’s going to complement Bradley pretty well.”
The Vandals will open up the season on the road this Friday, taking on the Gillespie Miners, who they bested, 30-6, to open up the 2014 season. A trend they would like to continue.
“I just think overall we have a lot of guys who have gotten better since last year. I don’t think one guy sticks out,” Stout said.
“I just think we have a lot of guys who are pretty solid who may not be real flashy, but are fundamentally sound and good football players.” 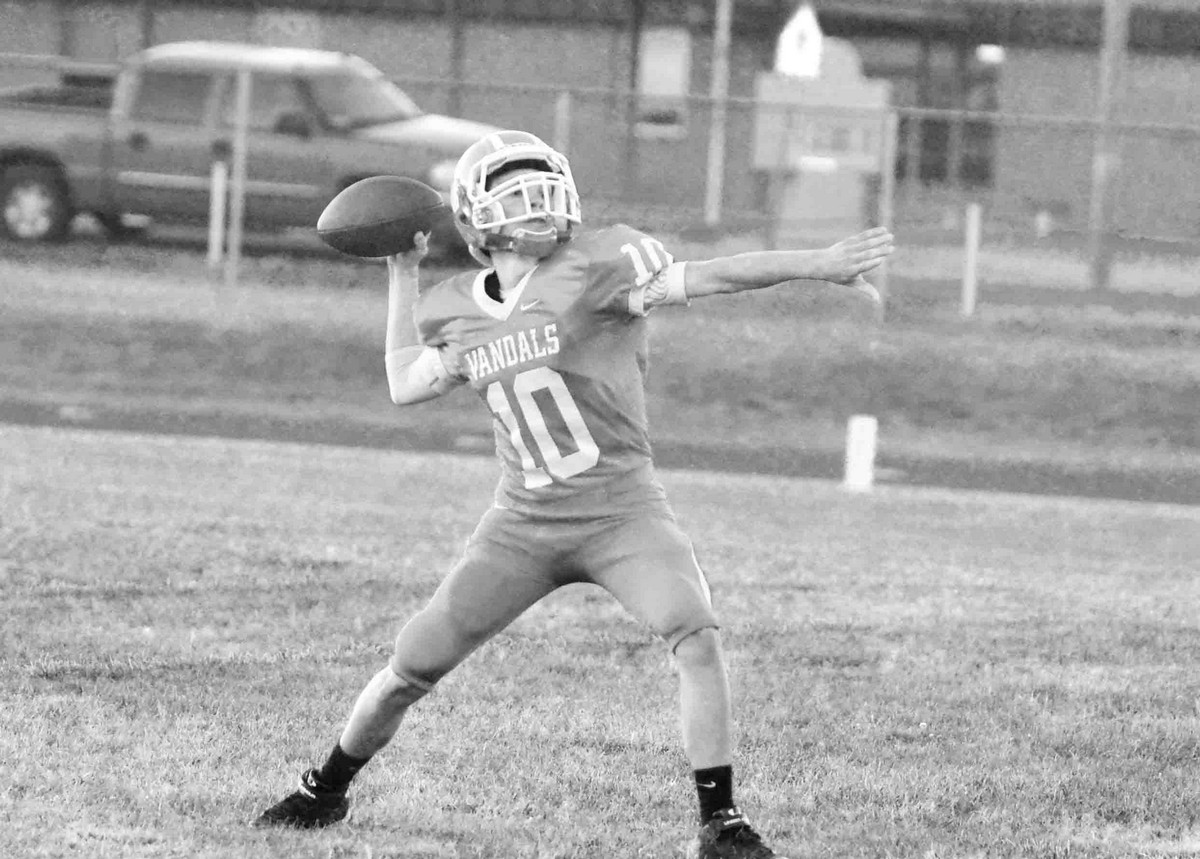 Collin Nestleroad was a dangerous dual threat in 2014 with a combined 1,961 yards and 23 touchdowns leading the Vandals to a 5-5 record.