Demolition work on three buildings at the main intersection of Vandalia’s downtown business district got under way on Wednesday.

Vandalia Mayor Rick Gottman reported at Monday’s city council meeting that he had chosen Razmus Demolition Services of Chrisman to “surgically remove (the buildings) and make it (the area at Fifth and Gallation streets) safe.”
In reporting on the project, Gottman said, “It is history we are losing. I hate it – we had no option.”
The demolition project, including removal of the demolished structures and seeding the ground for grass, is expected to take up to 60 days complete.
Gottman was given the authority to choose a demolition firm when the council voted at a special meeting on Aug. 7 to give the mayor emergency powers.
The council took that action after roofs on the buildings at 503 and 507 W. Gallatin St. collapsed in the early morning hours of Tuesday, Aug. 4. The collapse came several months after the parking lanes east of 501 W. Gallatin were cordoned off due to concerns about the stability of that structure.
A structural engineer obtained through the city’s consulting engineering firm, John Crawford and Associates, visited the site later that day, and offered the opinion that the buildings needed to be demolished.
At the urging of Steve and Kyle Barker at the Aug. 7 council meeting, Gottman agreed to seek a second opinion, to see whether the buildings, or parts of them, could be saved.
Last week, structural engineers with ESI Consultants Ltd. also recommended that the buildings be demolished.
In addition to looking over the exteriors of the buildings, Dave Clark and Mike Vandergast reviewed videos recorded by the Fayette County Sheriff’s Office’s drone. They recommended that the three buildings “be demolished as safely and expeditiously as possible.
“Once the demolition efforts are complete,” they said, “it is recommended that the adjacent existing structures be examined closely to determine if any measures need to be taken to ensure the stability and safety of these structures.”
After receiving that recommendation, Gottman began soliciting proposals from demolition firms interested in taking on the project.
He reported at the council meeting that Razmus submitted the lowest of three proposals, a maximum of $345,000.
In that proposal, Razmus explained that successful segregation of hazardous materials, such as asbestos, could result in the cost being as low at $222,351.
Others submitting proposals were Anderson Backhoe of Decatur, $368,887.06, and Mettler Development of Highland, $348,000.
Gottman said that the painting on the east side of 501 W. Gallatin St. would be removed and reattached at Something Special one block to the east, on the south side of the 600 block of West Gallatin.
The stop sign at the northwest corner of Fifth and Gallatin streets is being removed during the demolition, as is the railing in front of the three buildings being demolished.
The mayor said that Razmus has agreed to attempt to save some architectural features of the building, such as the metal stairs on the east side of 501 W. Gallatin St. and the concrete eyebrows above windows on the buildings.
Gottman said that the “biggest concern” of Razmus is the chimney on the back of the buildings, so that’s where the work will start. Removing the chimney, Gottman said, will relieve pressure on the walls of the buildings.
He also said that the demolition firm will do all it can to prevent damage to the walls at Nedra’s Printing, which is adjacent to the north side of the building at 501 W. Gallatin St., and the building on the west side of 507 W. Gallatin, which is owned by Dennis Grubaugh.
The ESI engineers recommended that the concrete barriers set up at Fifth and Gallatin streets be moved back, but Gottman said that Razmus believes that they are back far enough. The demolition firm has installed fencing atop those barriers.
The mayor that a representative of the firm spoke with owners of nearby businesses about the work being done, and that Razmus believes that the project won’t necessitate the closure of nearby businesses.
The council voted on Monday to extend the emergency powers granted to the mayor until the council meeting on Sept. 8, and will likely continue to do so until the project is completed.
The city is also taking steps to have court orders signed that prohibit anyone from going onto the property during the demolition. Anyone found on the property, Gottman said, will be arrested.
Gottman said that ProWire has installed exterior cameras, two on city hall and one on First National Bank, to record the demolition and help provide security during the project.
Alderman Dorothy Crawford asked about the possibility of the city recouping the money it spends on demolition, and the mayor said that that is unlikely.
Gottman said that the person currently listed as the owner, Bob Anderson of Effingham, died on Monday and that there are no assets in his estate. At the start of Monday’s  meeting, the council observed a moment of silence for Anderson, who formerly operated a jewelry business in downtown Vandalia.
Also, Gottman said, the city is listed as the 12th lien holder on the property. 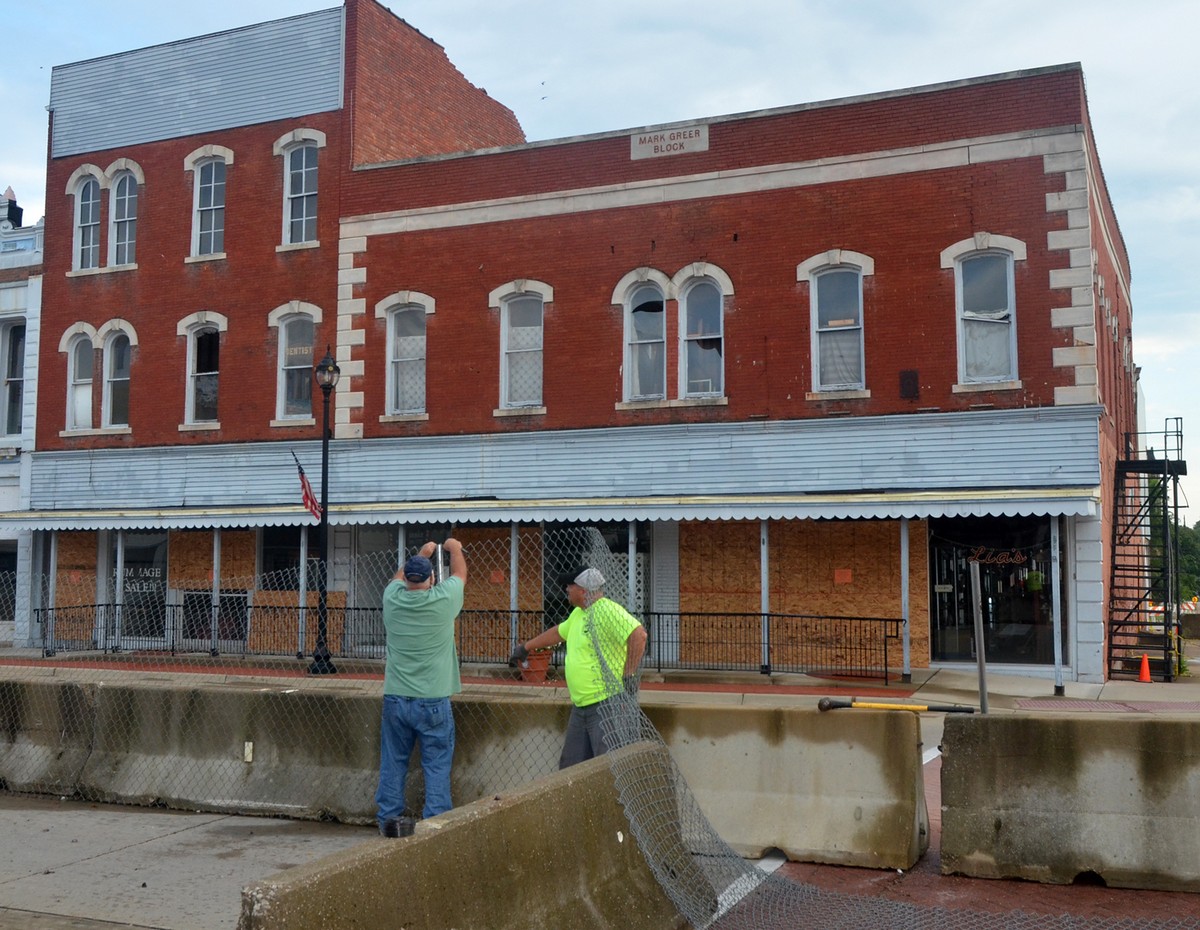 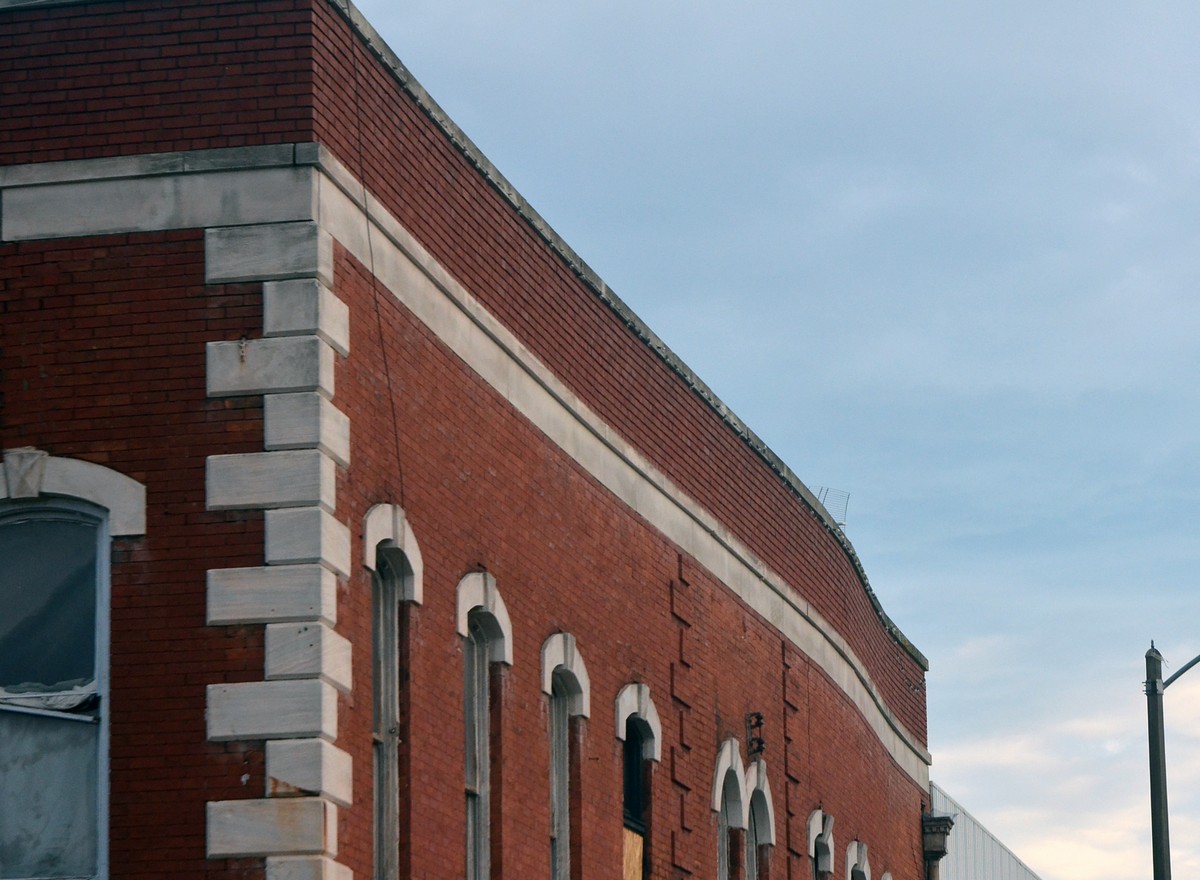 This photos shows how the east side of the building at 507 W. Gallatin St. is bulging outward.