When I heard the news Monday of the collapse of the roof of a building located on the 500 block of Gallatin Street I had trouble in my minding figuring out where this was. Had the reporter mentioned the Pitkin building or the name of Mathias Fehren, my mind would have zeroed in on the correct building, but those names are ancient history.

Thomas Pitkin did not build the three-story structure in 1868; Matthias Fehren did that.  A native of Braulingen, Germany, Fehren was born on Feb. 9, 1815, and came to America in 1833.
For a year before coming to America, Matthias was sent to France to live and work. His father managed a large hotel, was a merchant and operated a brewery in Germany.
Matthias first settled in Terre Haute, Ind., where he met Catherine Wahl, also a native of Germany.
They met, married and soon after moved to VanBurensburg in Montgomery County, Ill., where he entered the mercantile trade. While living there, Rev. Gordon, then a Presbyterian missionary, convinced the businessman to move to Vandalia, which he did in 1850.
Fehren first opened for business in a frame building on the same corner location. In a comparatively short time, he was successful in building up the largest retail merchandising business in the area and, as mentioned above, had the three-story erected in 1868 by Isaac Barnett, architect and builder. This pretentious building was the central business in the Vandalia business district.
The lower two floors were occupied with clothing, dry goods, ladies’ and men’s shoe department, grocery, and a suit and cloak department, with the third floor taken up by the Fehren Opera House and community center.
Almost from the time he moved to Vandalia, Matthias Fehren made a mark on Vandalia. He helped to establish Farmers & Merchants Bank in 1871 and was on the first board of directors, along with George H. Dieckmann, Christian A. Sonnemann, Daniel Gregory, Beverly Henry, Azro Willis and Elias Stokes.
Upon his death in 1876, he was succeeded by the firm of Wagner, Wahl & Co., which was composed of men who had worked under him.
Mr. Wahl sold out his part of the business in 1875 and the business continued until 1882 under the firm name of Wagner & Gerichs. T.N. Pitkin joined Wagner in the business, and it was under his name that the business continued from 1890 into the 1900s.
The Pitkin store operated in three sections of the building and had separate departments for shoes, suits and cloaks, dry goods, carpets and rugs, and groceries. There was also a bargain basement.
In 1916, the business was operated under the name of Carp Department Store before Polk Atkinson & Co. relocated here from St. Elmo. Polk had moved into his store in the building three weeks before a fire destroyed the third floor on Feb. 27, 1930. His loss was estimated at $15,000, of which $8,500 was covered under insurance.
At the time of the fire, on Feb. 27, 1930, the damage to the building was estimated at $50,000. Smoke was seen at 4 a.m. by Alva Kilman, a night baker at the Purity Bakery Co., as he was going home, and he turned in the alarm to the night policeman. Miss Agnes Kelley, night operator of the Illinois Bell Telephone Co., saw smoke and also gave the alarm.
The cause of the fire was never determined. The Masonic Lodge held meetings there and their loss was set at $3,000, which included a piano, projecting machine and a priceless artifact, their original charter, granted in 1848.
The greatest loss was by A.T.&T., who had installed a new booster plant in the eastern part of the second floor the previous year. H.B. Curry was the local manager at the time of the fire.
Firewalls in the building saved many businesses in the building from damage, and the fire was brought under control within three hours.
At the time of the fire, the building was owned by Bert and Fred Fehren, who had inherited it from Mathias Fehren’s daughter, Jennie Fehren Higgins. In 1949, Dr. Mark Greer purchased the building from Bert Fehren for his daughters, Jill and Mary, who later sold it to Mr. and Mrs. Earl Yarbrough.
The recent collapse of the roof may well be a death knell for this historic structure, an anchor of Vandalia’s downtown. 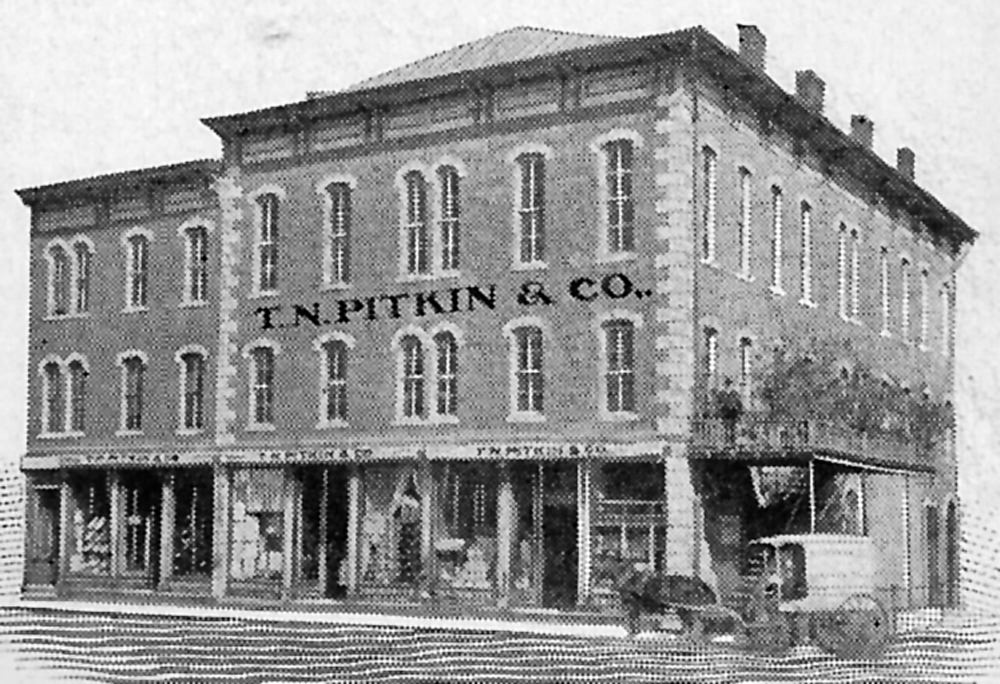 The building at the northwest corner of Fifth and Gallatin streets is shown in an early photograph.