Vandalia officials are expected to receive a second opinion on what should, or can, be done with three downtown buildings that were damaged in a roof collapse early last week.

Dave Clark and Mike Vandergast of ESI Consultants Ltd. of Charleston inspected the exteriors of buildings at 501, 503 and 507 W. Gallatin St. on Monday, as well as viewed a video of the damage that was recorded with the Fayette County Sheriff’s Office drone.
The sheriff’s office was to use the drone for another video early on Wednesday, and that will be forwarded to Clark and Vandergast.
Until a decision is made on what to do with the buildings, the city will continue to block off traffic in the eastern half of the 500 block of West Gallatin Street and the northern half of the 100 block of South Fifth Street.
Those sections have been blocked off since last Monday morning, when the roof collapsed at 507 W. Gallatin Street, damaging both that building and the adjacent one at 503 W. Gallatin Street.
The roof on the one at 503 W. Gallatin St. subsequently collapsed.
Prior to the collapse, the city was concerned about the structural integrity of the building at 501 W. Gallatin St., cordoning off the parking lanes on the east side of the building.
After taking a look at the exterior of the buildings, Clark said, simply, “There’s a lot of damage.”
Vandergast said, “Obviously, there are certain elements in place that don’t have their typical support the way that they’re supposed to.
“There’s only so much we can see from the outside.
“The videos are prime evidence of the current condition (of the buildings) and once we get a look at them, and compare them with our notes and the pictures we took today, we can start drawing some conclusions,” Vandergast said.
“It’s too early to tell” whether any of the buildings, or parts of them, can be saved.
“The videos shot from above are really going to tell us  most  of information we need in that regard,” Vandergast said.
Clark said that he and Vandergast “will go back and (make) a report as to what our findings are an what we think needs to be going forward.
“Time is of the essence, to some degree,” he said. “We need to pore through the videos and come up with the right recommendation.
“Then, the city can move forward appropriately,” Clark said.
“The city has done a great job with what they’ve done so far, blocking off the street. It’s definitely a safety issue for the public.
“You don’t want people walking and driving through there,” Clark said.
The city had the buildings inspected externally a day after the initial collapse, and agreed to seek a second opinion, after Steve Barker and his son, Kyle, said they believed it would be a good idea to see whether the structures, or parts of them, could be salvaged.
At a special meeting on Friday, the council approved an ordinance amendment giving the mayor the authority to act in an emergency situation.
At that point, the demolition of the buildings was in the forefront of the conversation. Mayor Rick Gottman said that he had been contacted by three contractors interested in handling the demolition, and that a fourth, Jason Mettler, was in the audience.
Mettler estimated that it would cost $10,000-15,000 just to take the buildings down. “The big expense is hauling it off,” he said.
The city last week was granted a court order allowing it to take emergency action in response to the collapse.
Named as defendants in the court order are current and former owners of the building, as well as financial institutions issuing loans on the property, the state and federal government, and other lien holders.
The city is still working to determine the legal owner of the property, to find out who would be financially responsible for demolition or work to save all or parts of the buildings.
At this point, officials are resigned to the fact that the city may have to use some of its funds.
City Attorney Jack Johnston said that he has “no knowledge whether insurance is being held” on the buildings.
Gottman agreed to call in a second structural engineer after the meeting, after the Barkers brought up several issues near the end of the meeting.
Steve Barker asked whether demolishing the buildings would damage adjacent buildings to the extent that they also would have to be torn down. 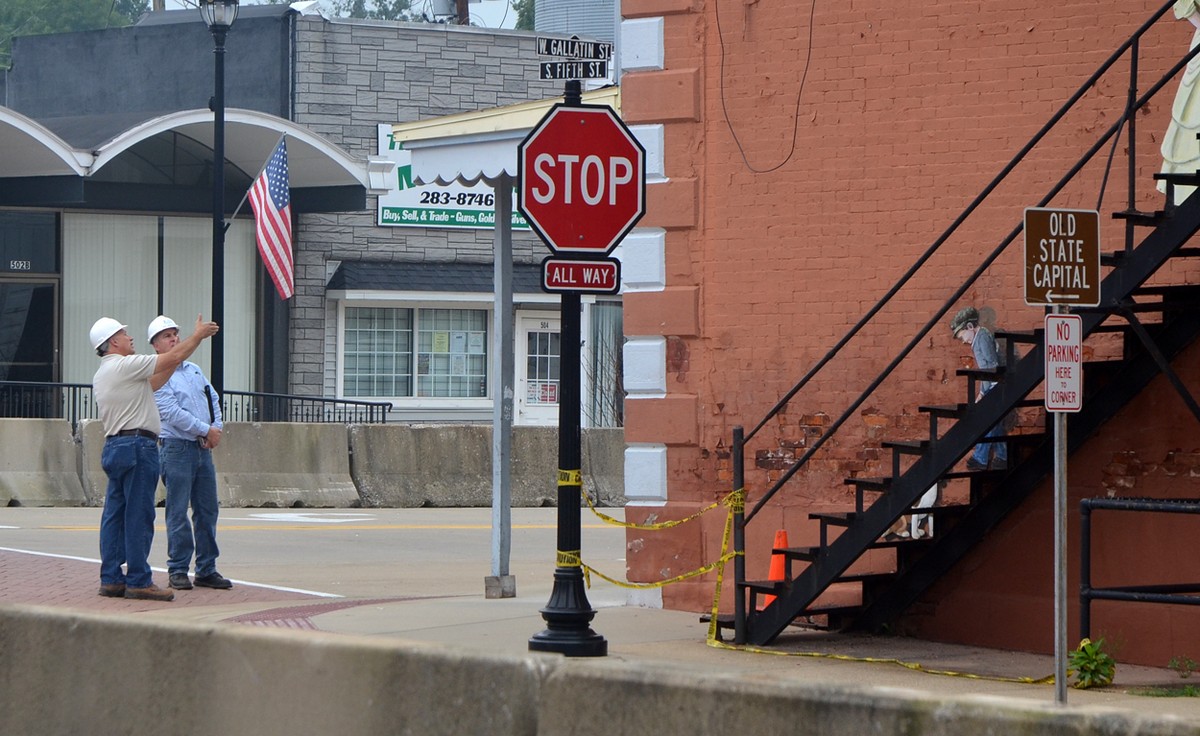 Dave Clark and Mike Vandergast of ESI Consultants inspect the buildings on Gallatin Street that were damaged by roof collapse last week.