Tuesday was the first day of changes for the Vandalia School District as administrators, teachers, students and parents prepare for the start of a new school year.

Many of those changes are a result of the district’s school board to transfer students from Jefferson Primary School to Vandalia Elementary School, and to move fourth-graders from VES to the junior high school.
“We will be pushing right up to the last minute, but we’ll be ready to go,” Vandalia Superintendent of Schools Rich Well said late last week.
“We’ve hit all of our dates and were going to be ready,” he said. “We’ve got a little bit of work left to do, but I’ve been very impressed with how things have turned out, such as with the new rooms, the size of the rooms.”
The dates that Well mentioned have included deadlines set for renovations made to create additional classrooms at VES and VJHS.
And moving students from one building to another also means moving furniture and equipment.
“Our maintenance and custodial people have really been workhorses,” Well said.
“Now, it will require a little bit of patience on the part of our teaching staff as they get settled into their rooms,” he said.
“There has been a tremendous amount of preparation work,” Well said, talking about the efforts of maintenance supervisor Mike Kopp, Smokey Newsom and the district maintenance and custodial personnel.
“They really had to have a plan to make this work, and they did,” he said. “The nice thing is, they went through this when we moved out of the Lincoln, Washington and Shobonier buildings.
“They saw what worked and what didn’t, and learned from that,” Well said.
“And, we still have many teachers who were around for those moves, and they learned from it, too. They’ve been really good at boxing up and labeling things,” he said.
“We’ve had a lot of teachers in this week getting their rooms ready,” he said.
Well also praised the work of the district’s technology people, John Isringhausen and Kent Kistler. “They’ve been working hard to get Internet access into the new areas, new classrooms, where that will be needed.”
One of the issues remaining for the district is where to store excess furniture and equipment.
Construction on a new storage building, at the corner of School and Seventh streets, a block east of the high school, is behind schedule, so the district is trying to work out a plan to store excess items until that building is done and to avoid having to move those items multiple times.
For at least the first semester, Well said, custodian Dave Rickman will stay at Jefferson Primary School to itemize and organize furniture and equipment.
The northern part of JPS is now being used by the Regional Office of Education for alternative education classes and administration.
This is the first year that district families could pre-register their students, and Tuesday was the first day for registration.
Well saw improvement in the process, and said district personnel will evaluate the process to make improvements in the future.
Long lines to pay student fees were due in part to printer issues, Well said. And, he said, it may have shown the need for additional cashiers.
For the first year, he was pleased, with about half of the students in the district being registered before the doors at VJHS even opened for registration on Tuesday.
“They can now do everything at home (online),” Well said. “They then can come up, pick up their children’s schedules and go to the pay line,” he said.
Well knows that there may be some issues arise, because of all of the changes.
“As with any changes, there will be glitches in everything … the classrooms, traffic flow and registration.
“But the goal is moving forward, and what needs to be addressed, we will address,” Well said.
“We will evaluate everything after two or three weeks before we would make any changes,” he said. “We won’t make any changes the first day because something happened.” 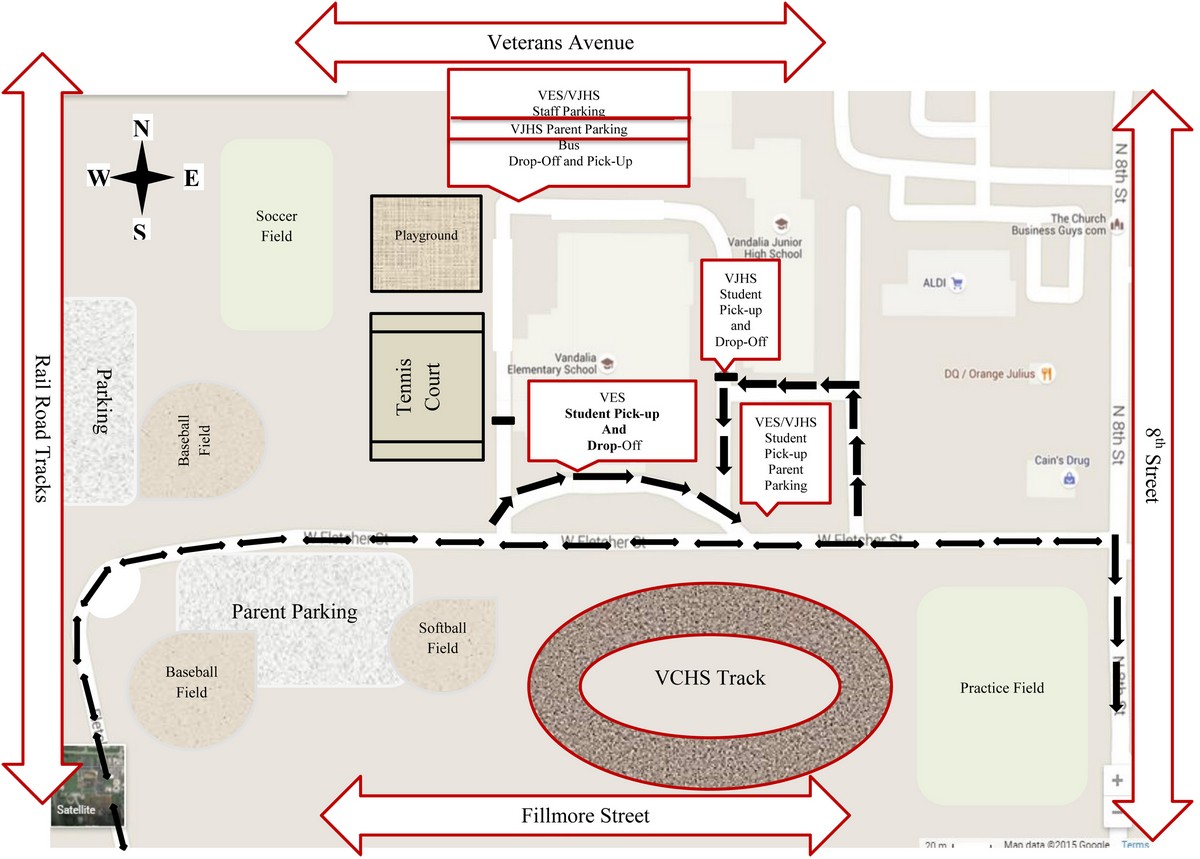 This map, provided by Vandalia Superintendent of Schools Rich Well, shows the traffic flow and parking for Vandalia Elementary School and Vandalia Junior High School. The changes from last year include: • Traffic in the circle drive at VES traveling east instead of west. • The parking lot south of VJHS is for VES and VJHS student pickup and parent parking. • The parking lot north of VES is sectioned off for parent and school staff parking.