A little more than 100 years ago, Henry Ford’s son stopped over in Vandalia as he and some of his friends were on one of this country’s earliest road trips. On Sunday, a crew stopped here as they re-create that trip.

A Historic Vehicle Association crew led by President Mark Gessler is making the trip from Detroit to San Francisco just like Edsel Ford did in 1915, traveling 35 mph in a 1915 Ford Model T.
As it arrived at the National Road Interpretive Center at about 7 p.m. on Sunday, the crew was greeted by a group of about 40 local residents, including Tony Lawler of Vandalia; his parents, Larry and Ava Lawler of Mulberry Grove; and his aunt, Roberta Wilson of Fillmore. Those four residents watched as the team left the Henry Ford Museum in Detroit on July 17.
The journey, called the Road Trip Century Celebration, will end in San Francisco on Aug. 18.
Gessler said that Edsel Ford “and some schoolmates” were among those who began traveling cross-country in 1915, which Gessler said “became the birth of the American road trip.”
That group was among those traveling to San Francisco for the World’s Fair in what were “publicity events,” Gessler said. Others making such a trip was Emily Post, a famed American author of that period.
At that World’s Fair, Gessler said, 1915 Model T’s were being built in a modified version of the assembly line for which Henry Ford had become famous. “It was the most popular exhibit,” Gessler said.
During the HVA group’s stop in Vandalia, Gessler presented Tony Lawler and Mayor Rick Gottman with copies of detailed journal kept by Edsel Ford and his group.
That journal shows that the group stopped in Vandalia at midnight on June 18, 1915, and left town at 10 a.m. the next day, arriving in St. Louis at 4 p.m.
Their journal shows that the group purchased three gallons of gas in Vandalia and that the cost was 12½ cents per gallon.
By the time they stopped in Vandalia, they had completed just under 500 miles of their 4,122-mile trip.
Gessler described the Ford group’s trip as “just a bunch of young guys, 21 years old, out to have fun.”
He described their trip as “probably the most well-documented and under-appreciated tour across the country.”
Henry Ford began building Model T’s in 1908 and by 1915, Gessler said, 1 million had been built.
He compared that innovation to today’s version, the iPhone.
Since 2007, 1 billion iPhones have been produced.
Both of those have had a huge impact on society, “both costing about $500,” Gessler said. 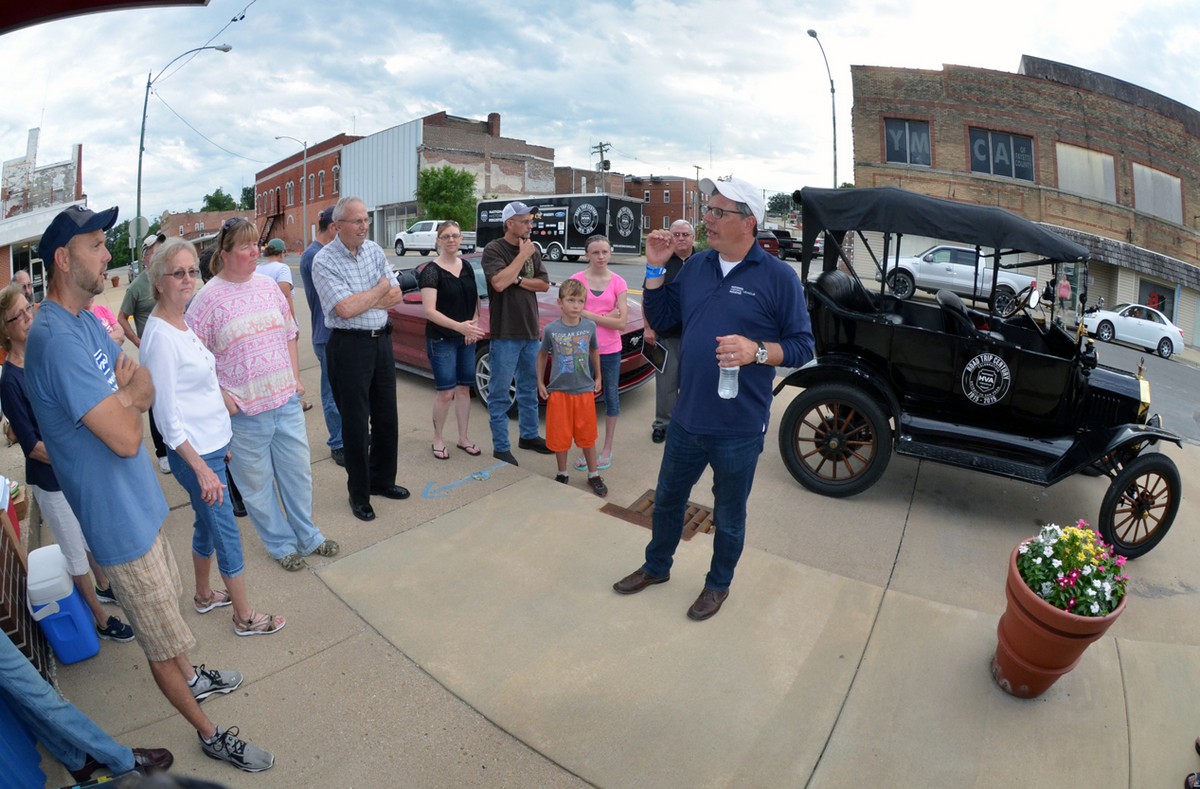 Mark Gessler (right), president of the Historic Vehicle Association, talks to a group of local residents on Sunday evening about the HVA’s trip to San Francisco. 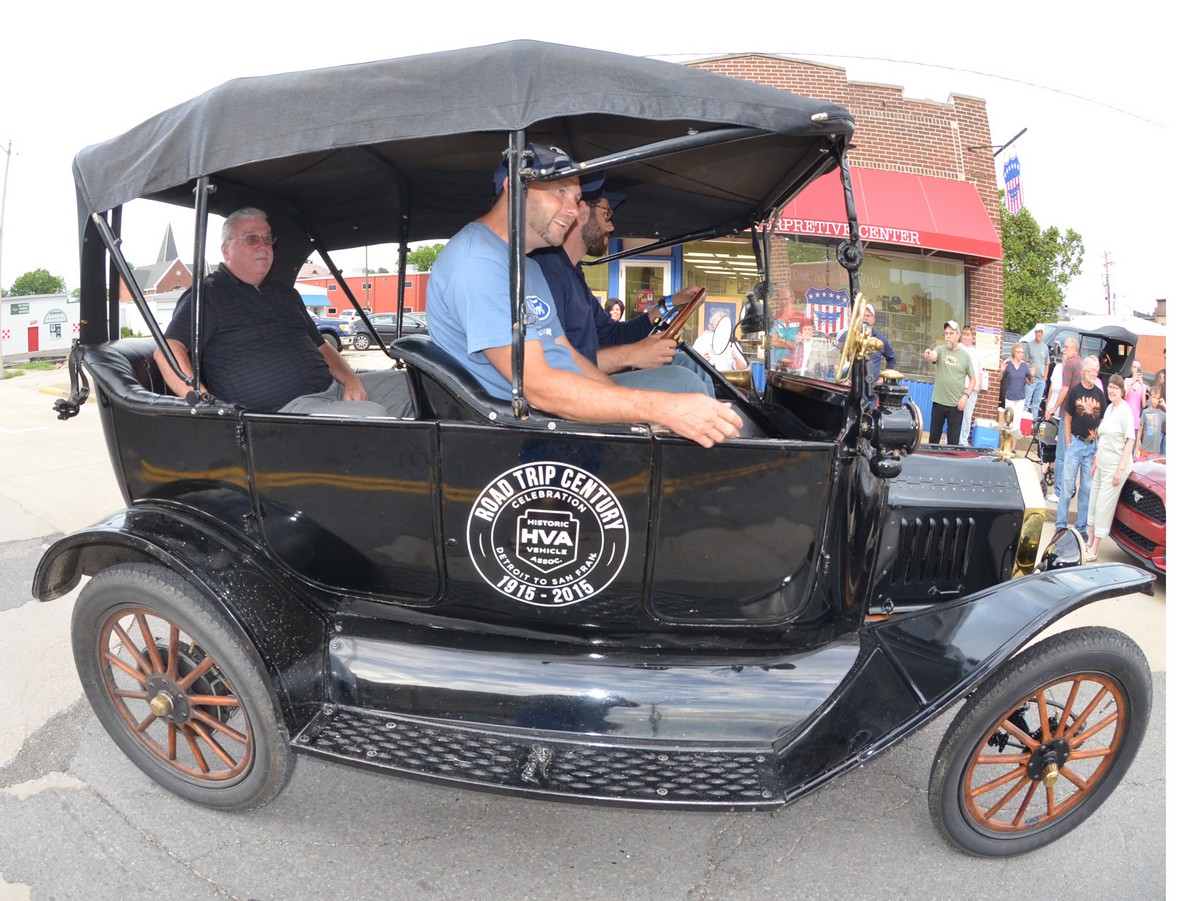 Mayor Rick Gottman and Tony Leidner go for a ride in the HVA’s 1915 Ford Model T. 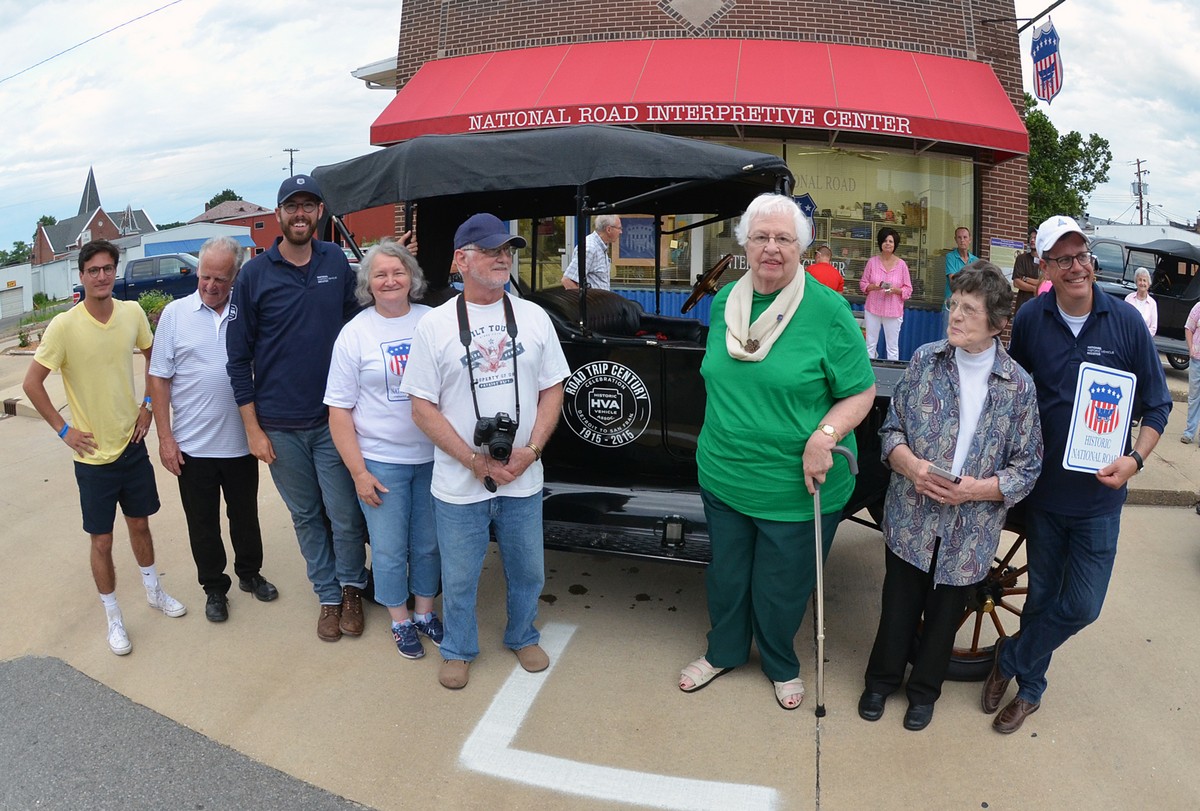 Local representatives of the National Road Association of Illinois presented officials with the Historic Vehicle Association National Road signs during their stop in Vandalia on Sunday night. Presenting the signs were Mary Truitt, Donna Blair, Jerry Swarm and Joyce Mueller. 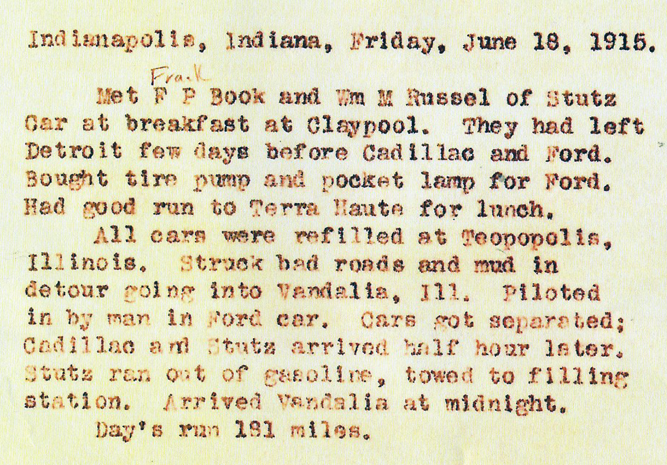