By Panzi Blackwell
Fayette County Home and Community Education held its 67th annual meeting and dinner in the Northside Christian Church fellowship room in Vandalia on June 16, with 27 members and two guests of honor present.

Fayette County HCE was honored to have the state president of Illinois Association of HCE, Jane Chapman, and Marilyn Schaefer, District 6 director, present to participate in the evening’s activities, and to officiate in the installation of the Fayette County officers.
The room was decorated in keeping with the IAHCE 2015 theme, “Come Together and Walk with HCE.” Each table held attractive centerpieces of baby shoes, a bottle of water and mini-flower arrangements, created and made by Fayette’s cultural director, Ashley Davis.
A colorful shoe tree with tiny pink doll sneakers, boots, and tiny pink tote bags tied on the branches with purple bows, also created and assembled by a member, sat behind the Fayette board and guests’ table.
Flo Allen, president of Fayette County HCE, welcomed all present and led all in the Pledge of Allegiance and Panzi Blackwell asked the blessing for the meal.
Following the meal, Allen called the annual business meeting to order and the attendance report of 27 members and two guests present was given by the St. Peter Unit, which had charge of registration.
• Second Vice President Anna Jean Rhodes presented the memorial service, recognizing and honoring the past year’s deceased members of Fayette County HCE. Members of the deceased members’ units commented on the member’s HCE history and placed a flower in a vase in tribute to their memory as follows:
• Evelyn Probst of the Bingham-Ramsey Unit gave tribute to the memories of Mary Stokes and Audrey Probst; Ashley Davis-Vandalia Day Unit, tribute to Irene Smith and Betty Stone; and Sharon Shelton-St. Elmo, to Goldie Harris. Rhodes led a prayer, closing the service.
• The report of the 2013 annual minutes was given by First Vice President Debbie Segrest in the absence of the secretary, Joyce Mueller’s, absence.
• Club Treasurer Carol Bridges gave the financial report, report of the Audit Committee, and the presentation of the 2014-15 budget.  A vote was taken and the budget was approved.
• The Fayette County Board officers present gave their respective reports. Allen gave the nominations report. All who were presently holding an office were nominated and voted to continue holding the offices.
Awards and Certificates
Anna Jean Rhodes presented the following awards and certificates:
Unit of the Year-Vandalia Day; Homemaker of the Year-Joyce Mueller in recognition of her HCE and community works; Special Recognition Homemaker of the Year Award-Flo Allen of the Sefton Unit, as she is beginning her 10th year as county president; a Homemaker of the Year award also went to Erna Koontz of the Wheatland Unit, in recognition of her long years of compassionate care and service to others, including her church, community, neighbors and family.
IAHCE President,  Jane Chapman, gave a brief, but interesting and inspiring talk, and officiated the installation of the officers: Allen-president; Segrest-first vice president; Rhodes-second vice-president; Mueller-secretary; Carol Bridges-treasurer; Anita Smith-community outreach; Donna Blair-family issues; Shirley Klitzing-International; Davis-cultural enrichment; and Blackwell-public relations.
Chapman presented each officer with a shoe that represented the duties of that particular office and a gift bag containing a mint candy (indicating the recipient’s value was “worth a mint”), a Hershey candy “Hug” “because everyone needs a hug), a dark chocolate Hershey kiss (for their health), and a Post-It notepad as a reminder of the encouraging words “I can and I will.”
Chapman wore a pink T-shirt with a red bird on it and bearing the words, “People should seriously stop expecting normal from me, we all know it’s never gonna happen.”
She began her talk with, “As my shirt says, I am not normal, so do not expect normal.” She expressed her delight at being at the meeting and her excitement to be serving as the new “team IAHCE coach.” She gave a very inspirational, informational talk in such a warm and friendly fashion that listeners felt like they were indeed, part of “The IAHCE Team.”
She gave tips on how to help local HCE organizations to grow. She suggested reading the Joel Osteen book entitled, “You Can and You Will! And to focus on the eight principles listed.
She said the entire team must participate and “communicate to others what a super organization HCE is, in order for us to continue and improve.
“Arise in the morning and think what a precious privilege it is to be alive, to think, to enjoy, to love!”
Photos were taken of the award winners and a potted flower was given to Chapman in appreciation of her attendance.
Present were: St. Peter Unit-Luella Rubin, Marion Rubin; Wheatland-Karen Hyde; Sefton-Shirley Klitzing, Flo Allen, Lois Jackson, DeeDee Diveley, Sally Behrends, LaVonne Kramer, Elizabeth Kasten, Phyllis Pryor, Panzi Blackwell; St. Elmo-Anna Jean Rhodes, Sharon Shelton; Bingham/Ramsey-Donna Blair, Goldie Beck, Evelyn Probst; and Vandalia Day-Alvena Noffsinger. Debbie Segrest, Ashley Davis, Carol Bridges, Anita Smith, Lura Tarter, Carol Bridges, Karie Frumm, Joyce Carter, Carrie Hill. 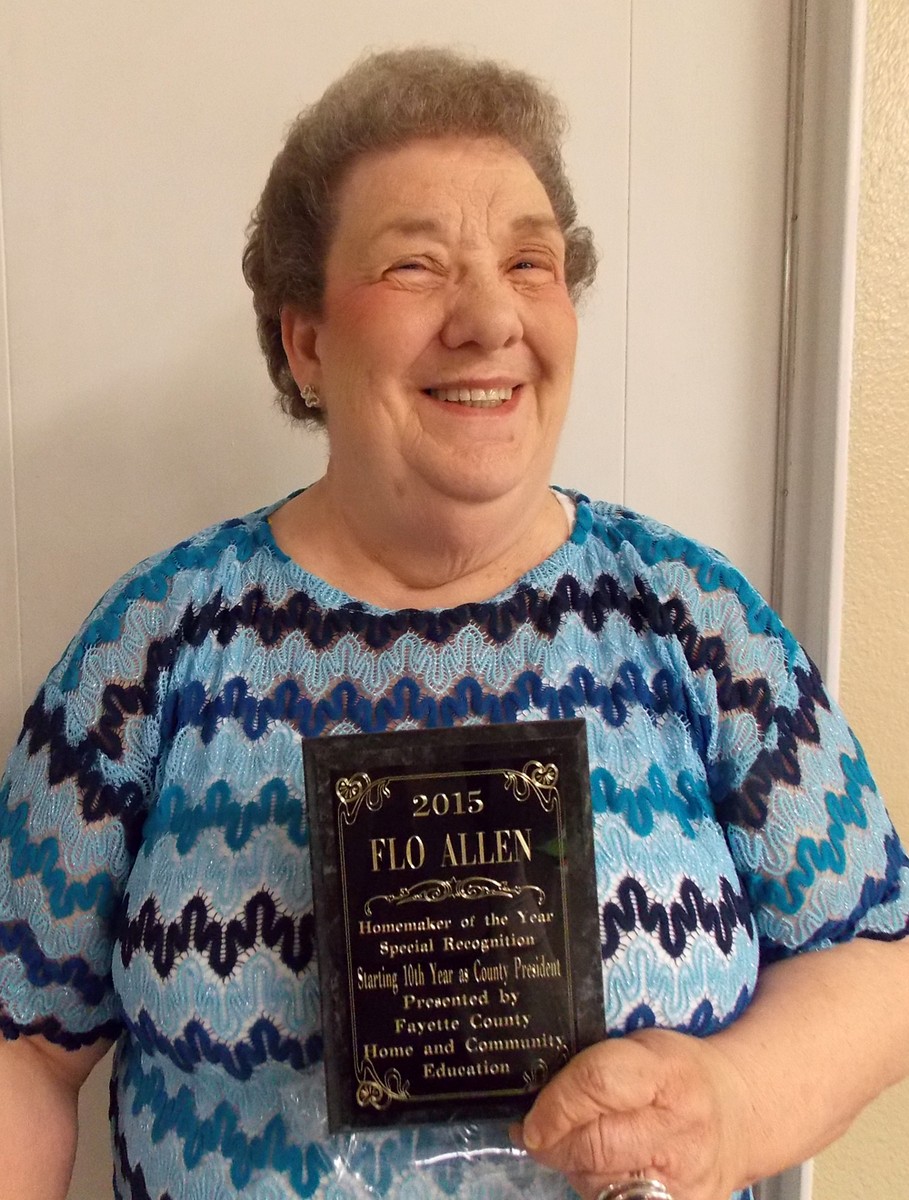 Flo Allen was given a special Homemaker of the Year award for serving as the covunty HCE president for 10 years. 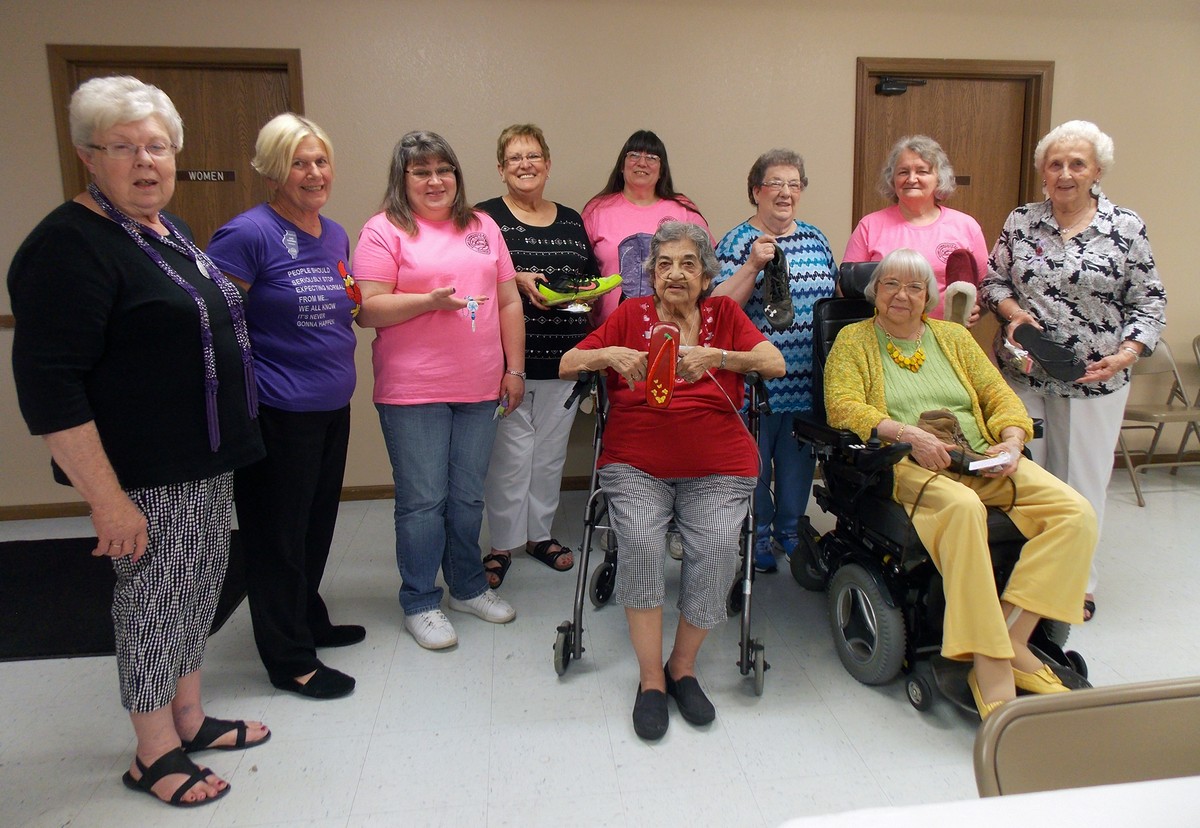