With two scratches, Vandalia’s Ethan Meyer had only one opportunity to prove that he is one of the top triple jumpers in the state.

And he took advantage of that opportunity, earning a fifth-place medal in Class 1A at the state track and field meet on Saturday at Eastern Illinois University in Charleston.
While Meyer was earning a medal in the triple jump, VCHS teammate Curtis Gordon was winning a medal in the pole vault, placing seventh.
A short time later, Gordon would secure a second medal of the weekend with a seventh-place finish in the 110-meter hurdles.
Also competing at the state meet this year were three entries for the Patoka/South Central co-op, with all three coming close to advancing to Saturday’s finals
Chase Riley competed in both the 100-meter dash, finishing 12th on Thursday with a time of 11.37 seconds, and the 200-meter run, finishing 10th on Thursday with a time of 22.80. The final spot in Saturday’s finals was earned with a time of 22.79.
Riley also was part of the 4×200 relay team that qualified for state. Riley, Jared Cain, Sean O’Leary and Tyler Back failed to qualify for the finals, but ran their best time of the year and broke the school record with a time of 1:32.34.
This was the second trip to state for Meyer, who placed 11th in the triple jump last year.
His medal-winning jump of 43 feet, 1.75 inches on Saturday was sandwiched between two scratches, and that jump was good enough for Meyer, who just completed his junior year, to reach his goal.
“I achieved my goal,” Meyer said. “My goal was medaling at state.
“I just wanted to get in the 43 (feet) range and I accomplished that,” he said.
His season best was 43 feet, 2 inches. “I was just short of that, but it was still near my best.”
Meyer’s efforts at state also allowed him to reach his preseason goals.
“My goals were to go 43 feet consistently, go to state and medal, and I achieved all of that,” Meyer said.
Marcus Sitko of Staunton won the triple jump at 46 feet, 2.25 inches.
Gordon, who will be a junior next fall at VCHS, placed seventh in the pole vault by clearing the bar at 14 feet, 3 inches, 3 inches higher than his performance last year, which got him a sixth-place medal.
“I jumped higher this year, but the competition was tougher,” said Gordon, who aimed to vault 15 feet, something he’d done twice this year at home meets.
“We’re disappointed, but we’re going to learn from the experience,” he said.
Riley Smith of Casey-Westfield won the pole vault with an attempt of 16 feet, 3 inches.
In the 110-meter hurdles, Gordon earned a seventh-place medal with a time of 15.34.
“My goal (this year) was to run a sub-15 in the hurdles, which I was very close to doing,” he said. His best time in that event was 15.03.
“I realized that I was the only underclassmen in the pole vault and hurdles, so that’s a little bit of a plus,” Gordon said.
“I’m going to learn from the mistakes today and come back next year,” he said.
With 11 points, Vandalia finished 26th out of 82 teams competing in Class 1A.
After being edged out for a chance to compete in the Saturday finals of the 200-meter run, Riley felt “pretty good” about his performances, but still a little disheartened.
“I feel like I maybe should have done a little better, but it’s a great opportunity to come out here (at state).
“It’s just disappointing not to make it to the finals,” he said. “It’s been a disappointing day, but it’s also a learning experience, and I’ve still got one more year,” the South Central junior said. 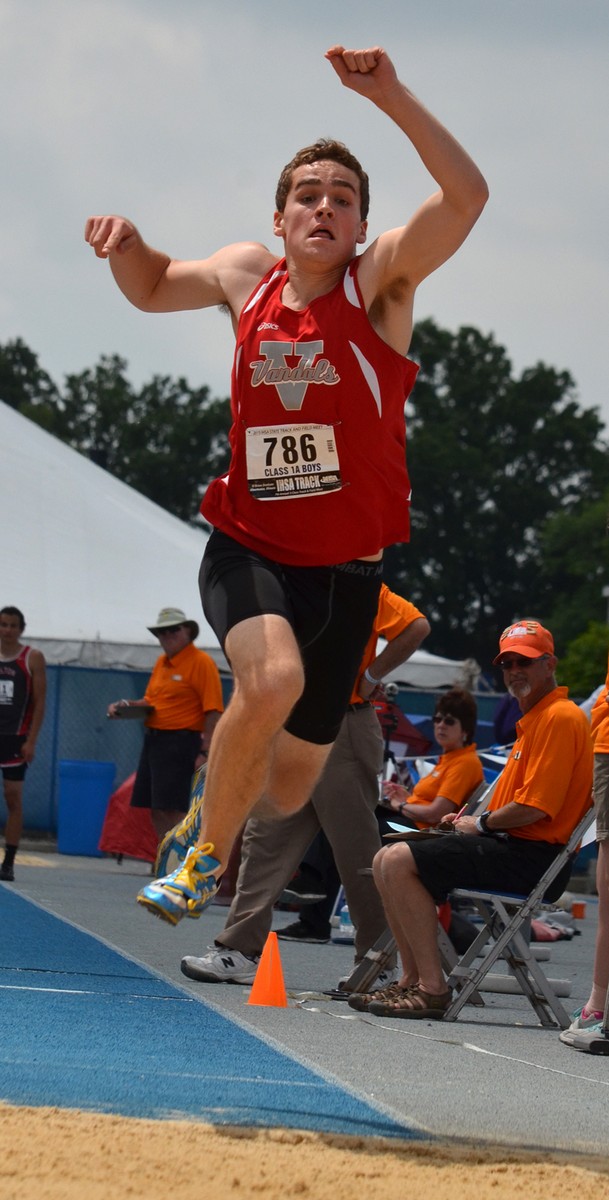 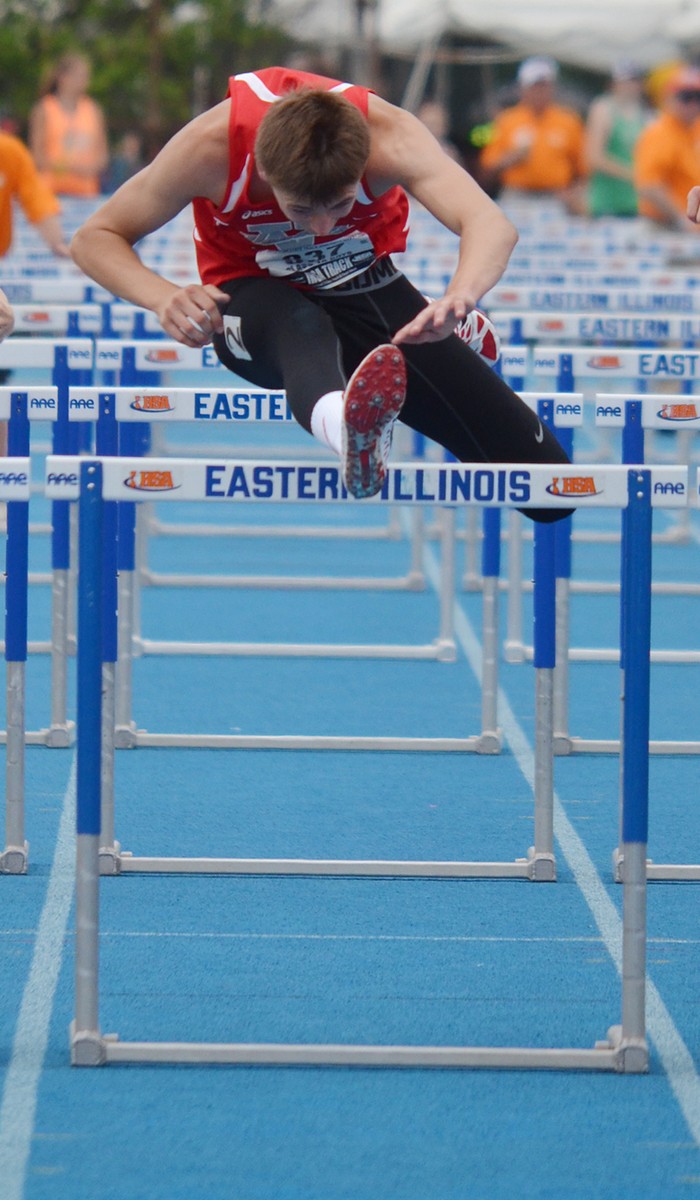 Curtis Gordon of VCHS competes in the 110-meter hurdles on Saturday. 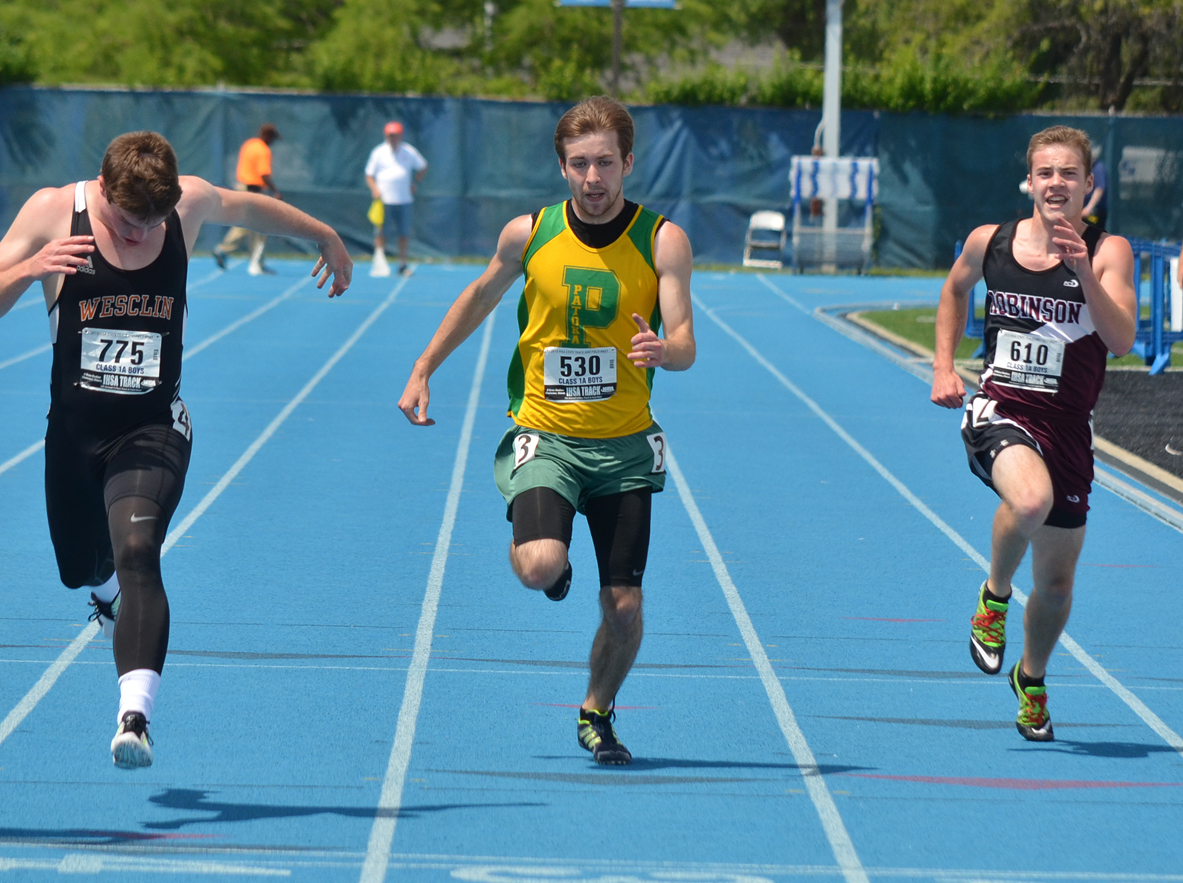 Chase Riley of the Patoka/South Central co-op track team competes in the 200-meter run at the state track meet last Thursday. Riley also qualified for the 100-meter dash and was part of the co-op’s 4×200 relay team. 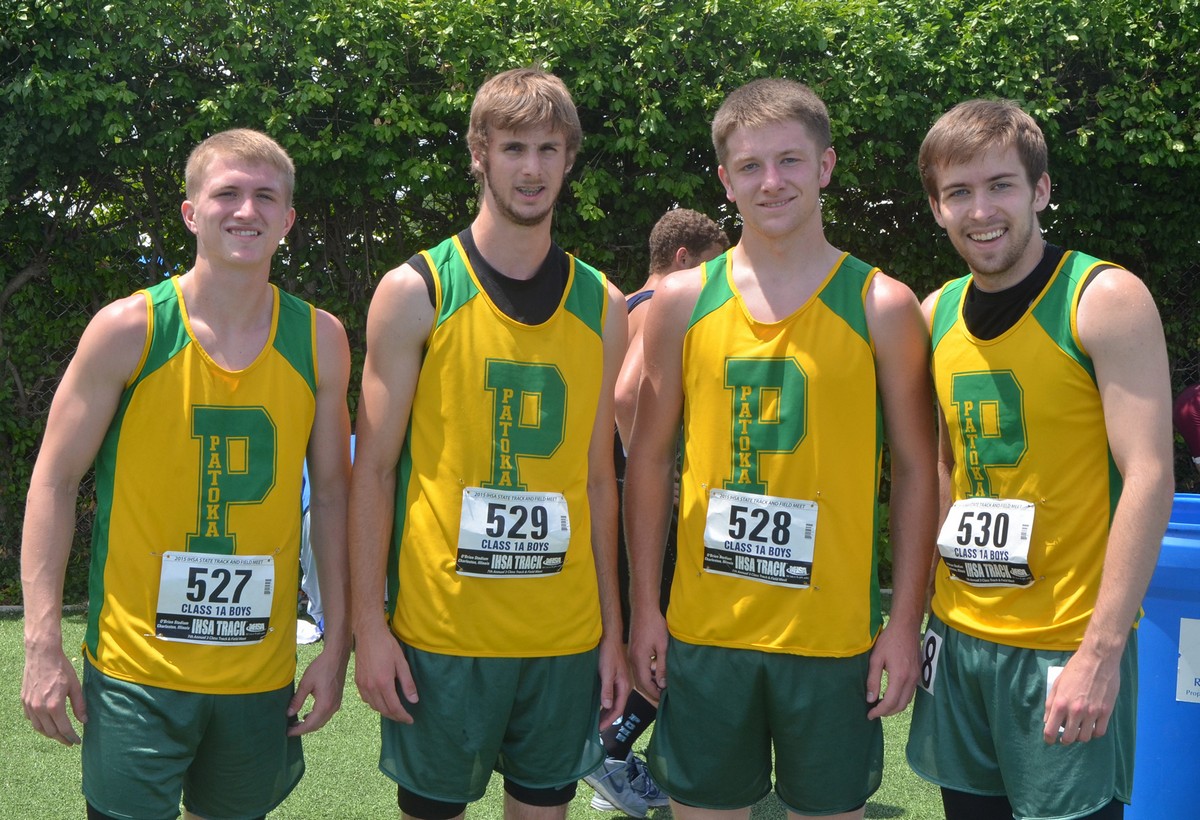 Members of the Patoka/South Central 4×200 relay team competing at state were Tyler Back, Sean O’Leary, Jared Cain and Chase Riley.