Rich and Heidi Cade, and their daughter, Madeline, began a journey 10 years ago, setting out together, accompanied by their Savior and Comforter, Jesus Christ.


Their journey was not one of miles, but on a path that sometimes seemed obstructed by disappointment and frustration, and, surely, sometimes even fear for their loved one.
But their journey was paved with their faith, prayers and the unshakable belief that God was always with them, no matter what was down the road.
They also felt the caring and prayers of their friends and the loving care and support of Rich’s knowledgeable and compassionate doctors nurses, therapists and all who helped them in Rich’s hospital.
Meet the Cades as they tell their story.
The Liver Journey Began
The Cades’ journey began a decade ago, when Rich was first diagnosed at Mayo Clinic with Alpha -1 anti-trypsin disorder.
They started going to St. Louis University Hospital, where they were under the care of liver specialist Dr. Bruce Bacon.
For the next five years, there were appointments every three to six months, with numerous tests.
“Rich was still able to work,” Heidi said. “If you saw him, most wouldn’t know he was even sick.”
At that rate,” Heidi said, they felt that if his health maintained, that Rich could live a good life, maybe never needing a liver transplant.”
An Obstacle in the Road Coped With
During this time, Rich was no longer employed as a Vandalia Correctional Center officer, and the loss of their health insurance and benefits, which was a serious blow.
However, the Cades always kept in mind that God would provide and that He would remain faithful.
Rich started a DJ business and made a successful career at that, as well as becoming a school bus driver for both Vandalia and Brownstown school districts.
About five years ago, Rich’s health started changing. They had more frequent appointments and tests, “They began calculating his MELD (Model End of Liver disease) score,” Heidi said. “It needed to be 15 for him to be on the liver Transplant list and at this point; his MELD was a 12.”
The Early Days of the Journey
“On Rich’s birthday, Feb. 7, 2012, SLU called us and let us know than Rich’s MELD was officially a 15 and he was now on the liver transplant  list,” Heidi said. “He met with a transplant team consisting of doctors, nurse practitioners, a pharmacist, social workers, financial people and a nutritionist.
“Rich began a battery of tests to prepare for the listing.”
The First Call
“On February 29th, we received out first call,” Heidi said. They weren’t expecting a call so soon,
“We were secondary (on the list), but they brought us in,” Heidi said.
She said that they were in no way prepared for that first call.
“We thought, ‘Our bags aren’t packed, do we have gas in the car, where does Madeline (age 13 at the time) go?’ We were a mess.”
Heidi remembered calling her mom and her sister, Cindy, pacing in the front yard. “They were reassuring us we could do it,” Heidi said.
That first call was a false alarm, because they didn’t get the liver, but it prepared them for the next nine calls over the years.
Rich’s Calm Faith
Heidi said, “Rich always kept going, always with a smile on his face and a faith in God like no other.”
“He would say, “No matter if I am healed, here or in heaven, I’m ready and our family, well, praise Him in the storm.”
“I prayed for God’s will to be done,” he said quietly.
The Past Three Years
“He was called time after time.” Heidi said. “Sometimes, pharmacy and the liver were just not good. Sometimes, secondary and the primary got it.
“Most can’t imagine an emotional roller coaster one goes through,” Heidi said.
Sometimes they were at church when the call came, sometimes he was already hospitalized, sometimes they were at work or asleep – they just never knew. They would grab their bag, call family and friends, take care of Madeline and head to SLU Hospital.
Good News on the Homefront
In 2014, Rich was hired full-time for Brownstown Schools as a bus driver. He can’t say enough wonderful things about how they made him feel needed and how they encouraged him.
“Most people don’t realize that Rich was a 10-year veteran and worked for 10 years at VCC, and this disease basically made him feel useless,” Heidi said.
But the Way Got Rougher
“In October, 2014, his MELD was jumping in the 20s, and you could now tell that Rich was fighting the disease.
This was the start of one hospitalization after another. Heidi was working two jobs, driving to SLU daily and trying to take care of Madeline.
Madeline, at this point, couldn’t go to the hospital, because at this point, because of the flu season, you had to be at least 18 years old. She missed her dad so much, but she was 6 when he was first diagnosed, and at age 15,this was normal for her.
Heidi was torn between wanting to be with Rich and knowing that Madeline needed her.
And Rougher
The next few months were a little scary. Rich’s kidneys were shutting down, therefore requiring dialysis, and he was carrying a hundred pounds of fluid.
He missed their wedding anniversary, their son’s graduation from the police academy and celebrating Christmas and New Year’s.
“But God is so good that Rich was discharged the day before Madeline’s 16th birthday,” Heidi said. He saw her get her license and went back in the hospital two days later,” Heidi said.
On Jan. 29, Rich called Heidi at work to say that he was a primary recipient and was being moved to ICU.
Next week, we will continue with the Cades’ next step out on the liver journey. 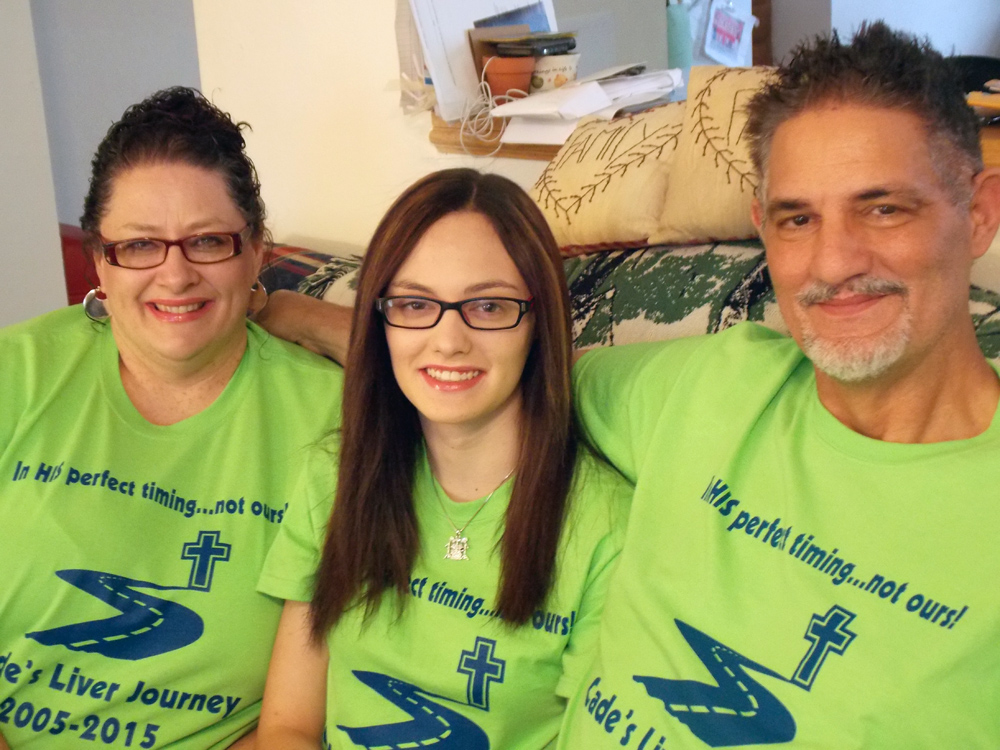