Zach Schaal held Greenville to just two hits while also contributing offensively, but a mid-game defensive miscue put an end to the Vandals season on Monday.

The Comets took advantage of a fourth-inning error to score what would be the winning run in the 2-1 regional contest on Monday.
Schaal struck out six Comet batters and walked three, and was 1-for-3 at bat with a fielder’s choice that drove in Richie Well for a 1-0 Vandalia lead in the opening frame.
Greenville responded with a run in the bottom half of the first, and the game was knotted until Greenville scored the winning run in the fourth on a Vandals’ error.
Well led Vandalia offensively with two hits in three at-bats, and Alec Schroeder had the Vandals’ fourth hit.
The Vandals finished the season at 7-14.

BSE 2, Clay City 0
Clay City limited the Bombers to just one hit on Monday, but it wasn’t enough to keep Brownstown/St. Elmo from advancing to the second round of regional play.
Each time had three errors as BSE recorded a 2-0 win at Bob Page Field in Brownstown.
Lewis Brown had the Bombers’ lone hit, driving in one of the two BSE runs.
Noah Flowers went the distance in getting the win for BSE, allowing four hits while striking out 11 and walking two.
Brownstown was scheduled to face South Central in the regional semifinals on Wednesday at Clay City.
Brownstown/St. Elmo improved to 10-14 on the year.

Mulberry Grove 9, BSE 7
A five-run fourth inning lifted the Aces over the Bombers last Thursday at Brownstown.
Murray was 4-for-4 with two doubles to lead Mulberry Grove, Sloan was 3-for-3 with a double and a triple, and Gooding homered.
Cole Horner and Noah Flowers each had two hits, including a double, for the Bombers, and Lewis Brown, Isaac Maxey, Nate Matthews and Dalton Denton each contributed one hit.
Derek Childress got the win for Mulberry Grove, striking out 12 in going the distance. Landon Feezel took the loss for BSE, allowing eight hits, striking out eight and walking three in 3 1/3 innings of work.

South Central 3, Dieterich 1
South Central defeated Dieterich in a road contest last Wednesday.
Dylan Smith homered in the seventh inning, and Ryan Matheny drove in two runs with a double in the second inning.
Noah Powless also doubled for the Cougars, and Gavin Ratermann was 2-for-4.
Dylen Brauer went the distance in improving to 2-2. He struck out seven, walked four and gave up four hits.

Flora 10, South Central 4
South Central closed out the regular season with a loss to Flora on Monday at Flora.
Flora scored eight runs in the first inning on their way to the win.
Three of the Cougars’ four runs came on a three-run homer by Dylan Smith in the fifth inning.
Gavin Ratermann was two-for-three with a double, and Jace Wilkins also had two hits in three at-bats. Dre Hill singled and had the team’s fourth RBI.
Smith took the loss, giving up eight runs in the first. Ratermann threw for one inning, and Ryan Matheny pitched the final four innings.

Southwestern 4, Vandalia 0
Vandalia closed out the home portion of its schedule with a loss to Piasa Southwestern last Wednesday.
The Vandals were limited to a triple by Marcus Zimmerman and singles by Zach Schaal and Josh Ledbetter.
Alec Schroeder allowed seven hits and struck out three in going the distance on the mound for Vandalia. 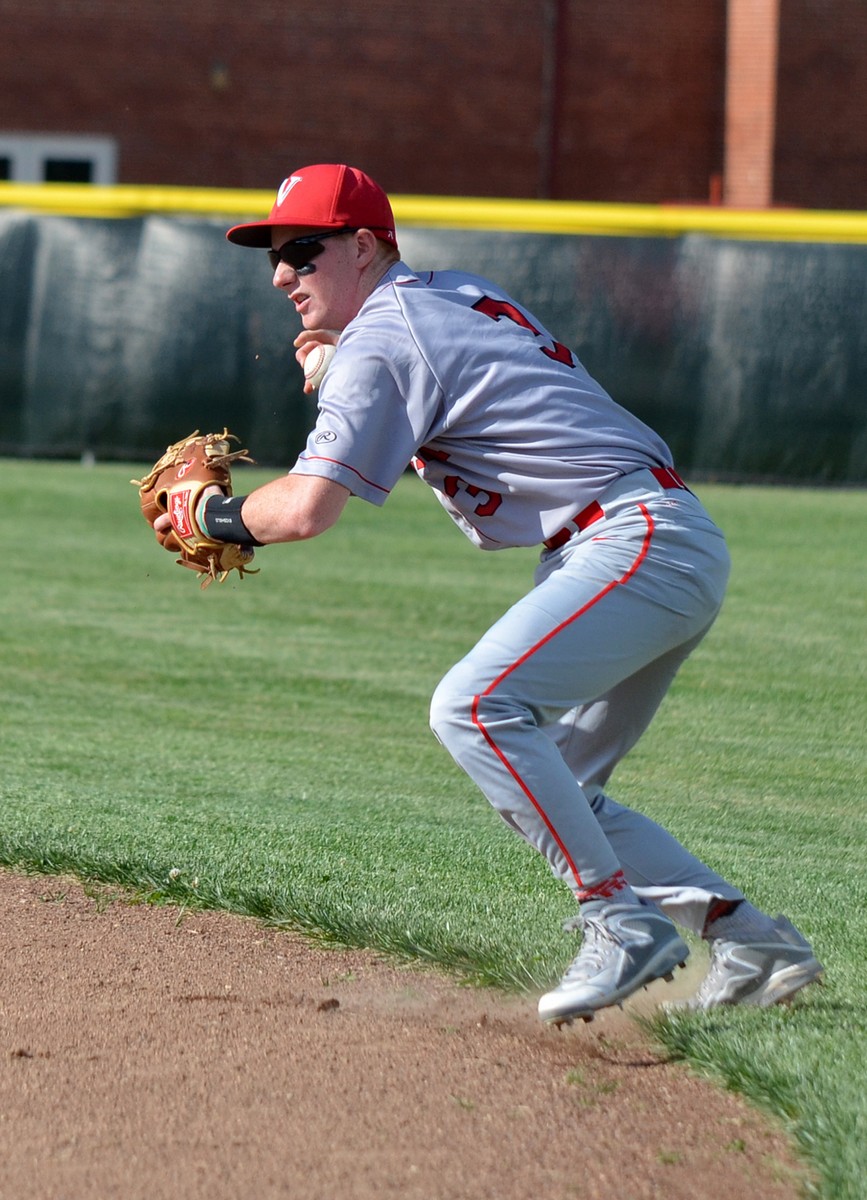 Vandalia’s Preston Ruckman throws to first after fielding a ground ball during Monday’s regional contest at Greenville. The Comets edged the Vandals to advance in the postseason.