F.M. Bolt, a former editor of The Ramsey News-Journal, contributed stories to his hometown newspaper on a regular basis. Over the years, I have looked at many back issues of the News-Journal on microfilm, and when I came across a Bolt article, I would print a copy and add it to my file.

It was this file I was looking through for my column about voting in the early days. The name Peter W. Blair kept popping up in F.M.’s articles. I knew I had seen that name before.
In a column published in July 1923, F.M. wrote, “I recall my first day of school in 1852, when I was 8 years old. The folks of the district had gone together and built a log schoolhouse, which they named Pleasant Hill.
“I had just learned to plough, but I preferred the school. So father said, ‘Frank, if you hitch up old Betts, the old mare, and split the middles in the old bluegrass field, then you can go to school. So, old Betts and I made haste, and when our task was done, she was turned out to grass and I to school.
“Chinked and daubed with a stick chimney with a big fireplace to be used, of course, in winter time. It was located near Old Butler Point, a hill on the Vandalia and Shelbyville road, near where Pete Mathias lived and died, and afterward, Wes Wilcut, who was known in his day as ‘Mayor of Jimpson.”
“It was a subscription school – three months for $2.50 a pupil – called ‘scholars’ then, so with about 20 pupils, he made the munificent sum of $50 or 16 2/3 dollars a month.
“Mr. Peter Blair had come out west from New Jersey and in 1852, applied for a school. He was a refined gentleman and well educated for that day. Mr. Blair was a fine penman and would write reward tickets to the one who stood head of the class on Friday evening. This created quite a rivalry among the ‘scholars.’
“The Eastern New Jersey man, our teacher, stopped a good deal of the time at father’s, and at the table, Mr. Blair would take out his silk pocket handkerchief when he sat down to a meal and spread it across his lap to be used as a napkin.
“A little later on, this good man obtained employment with Mr. M. (Mathias) Fehren, a leading merchant in Vandalia. Of course, boys of my age didn’t get to town often, but every time I did get to go, I, of course, went to see Mr. Blair, my former teacher for whom I had a feeling of kind reverence.
“He served Mr. Fehren for several years as bookkeeper and saved enough money to start a small store of his own. In 1863, I think it was, Mr. Blair became a preacher, Methodist, I think. When it was given out that Mr. Blair would preach on a certain evening, of course, I went.
“He passed away some time after that and his son, the late Irving Blair, succeeded to the store as well as a good farm up in the Leigh neighborhood. Irving was killed in 1898 in a railroad accident near his home near Hanson.”
After reading what F.M. Bolt had to say about his old teacher, I checked my records, for I knew now where I had seen the name … on a headstone in the Old State Burial Ground.
Over the years, I have taken pictures of nearly all of the markers in the cemetery and Peter Blair’s attractive and unusual marker is one of these.
From his headstone we learn that Rev. Peter was born in Hope, Warren County, N.J., on October 12, 1811, and was the son of Peter Blair. He died on February 12, 1870, in Vandalia.
Probate information tells us that the former teacher had done fairly well in his Vandalia store, Peter Blair and Son, because at the time of his death, his personal property was valued at $5,000 and real estate at $2,000.
Although Peter came to the county in 1852, there are no records that his wife, Caroline S. Ayers Blair, came with him. She is mentioned as a “non-resident” in his estate record. Heirs were son Washington Irving Blair and several surviving grandchildren.
Washington Irving Blair is found buying land here in June 1853 in North Ramsey Township. He told the editors of the 1878 Fayette County history book that he was born in Newark, N.J., in the year 1838.
When the call for soldiers came, Irving joined Co. D of the 68th Illinois Infantry, serving a couple of years. County records indicate that he married three times, but we have only the name of his third wife, Vina Clary, whom he married in 1891. At that time he described himself as a “retired merchant.”
Thanks to F.M. Bolt, we have learned more about the teacher he admired so much and, at the same time, we have learned a little history about Ramsey Township. 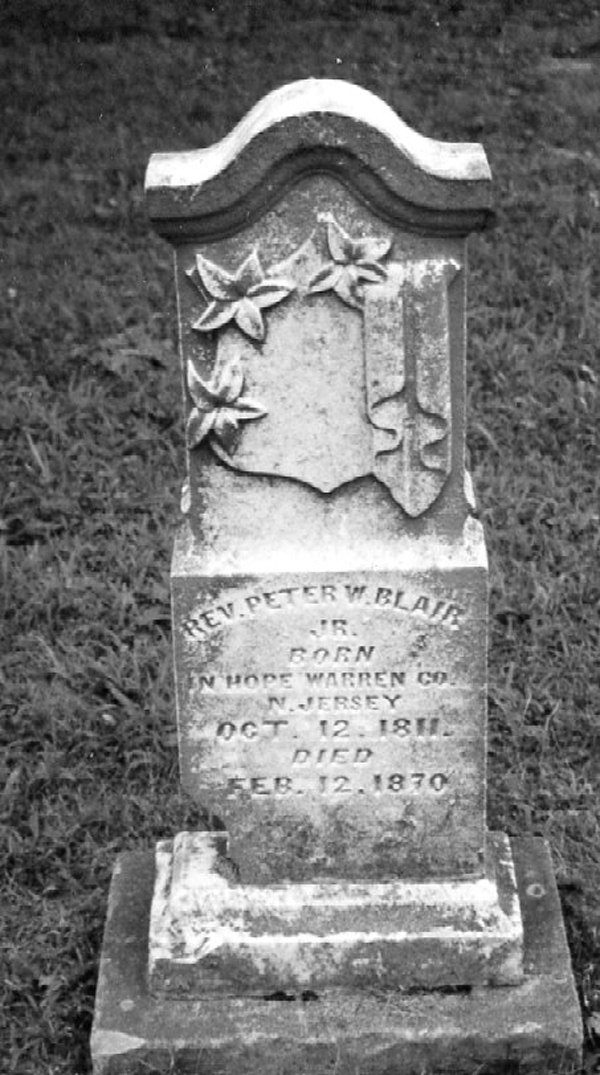