Greenville held Vandalia to just one hit in a five-inning contest on Monday.

The Lady Comets scored 11 times in the first inning, then added three in the second and five in the third.
Karlie Bright had Vandalia’s lone hit in the contest, and Bright and Kati Ladner each had a walk.
Daryn Waddell took the loss, giving up just five hits while walking three in 1 1/3 innings. Only three of the Lady Comets’ 14 runs with Waddell on the mound were earned.
Kesley Swain pitched 1 2/3 innings, and Molly Kern went two innings.
Gillespie 10, Vandalia 0
Gillespie limited the Lady Vandals to three hits last Friday while ending the game with a run in the fifth inning.
Lindsey Dagen had two of the Lady Vandals’ hits and Madison Click had the other one.
Waddell took the loss, giving up seven hits and nine walks.
South Central 10, Dieterich 0
Abby King allowed just one hit in the five-inning win last Thursday. King struck out six and walked just one batter.
King also was 3-for-3 on the day, with a single, triple and home run. She drove in three runs and scored three times.
Sidney Wilkins had two doubles in three at-bats, driving in two runs and scoring once.
Mia Campbell, Serina Lee, Jordan Schaal and Allanah Sigrist each had one hit. Lee had two RBI’s and Bailey Ritter had one.
The Lady Cougars improved to 2-5 in National Trail Conference play and 6-9 overall.
Pana 9, Vandalia 0
Pana scored five times in the fourth inning, then tacked on two more in each of the next two innings to record the win the Lady Vandals’ home contest last Wednesday.
The Lady Vandals were held to just two hits, by Mikayla Ruot and Gracie Morrison.
Kelsey Swain went the distance for Vandalia, giving up 18 hits.
South Central went 1-2 at the Robinson Tournament on Saturday.
—
The Lady Cougars lost to Robinson, 10-0, and Neoga, 11-1, and defeated Red Hill, 5-1.
Abby King and Kanady Grzegorek shared pitching duties in the Robinson game, with King taking the loss.
Jordan Schaal was 2-for-2, and Mia Campbell, King and Alannah Sigrist each had one hit.
Grezegorek took the loss in the Neoga contest, going the distance.
Bailey Ritter was 2-for-3, and Campbell and Sigrist each had one hit.
King held Red Hill to just two hits in the win, striking out nine and walking just one batter.
Serina Lee was 4-for-4 and scored twice, and Sidney Wilkins was 2-for-3, including a double, and had three runs batted in.
Campbell, Zoe Johnston, King, Ritter and Schaal each had one hit. Johnston and Schaal each had one RBI.
Mulberry Grove 11, SEB 6
Mulberry Grove scored seven runs over the first three innings and capped the win by scoring twice in the fifth and sixth innings.
Darby Moss and Tessa Philpot each had two hits for the Lady Eagles, and Kyrstyn Fitch, Stephanie Calhoun, Audriana Pruett and Baylee Scholes each had one hit.
Philpot and Calhoun each drove in two runs, and Fitch and Moss had the other two RBI’s.
Scholes went the distance for SEB, striking out two and walking four while giving up 11 hits. 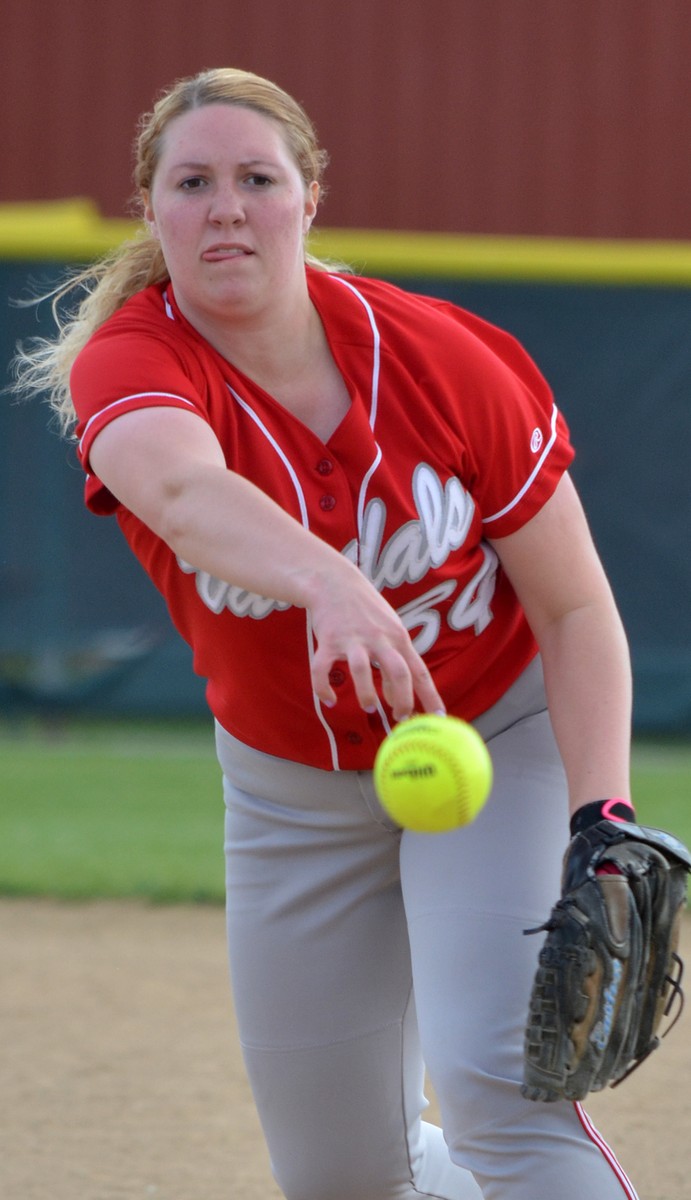 Kelsey Swain hurls for the Lady Vandals in the home contest against Pana last Wednesday.