Lewis Brown, Drake Hall, Noah Flowers and Wade Ireland each had one hit for BSE. Ireland drove in three runs, and Hall had two RBI’s. Brown, Feezel, Dalton Denton and Flowers each had an RBI.
The Bombers defeated Windsor/Stew-Stras on Monday, 4-2, with Hall throwing a complete game.
Hall struck out four, walked three and gave up seven hits.
Feezel led the offensive attack by going 2-for-3 with two RBI’s. Brown, Cole Horner, Hall, Flowers and Maxey each had one hit, and Hall and Flowers drove in the other two BSE runs.

Salem 11, South Central 2
South Central: Dylan Smith, 1-for-3, 2 RBI; Gavin Ratermann, 1-for-1 with three walks; and Dre Hill, 1-for-4.
Dylen Brauer took the loss, giving up five hits and seven runs while striking out one and walking two. Smith pitched two innings, striking out two and walking four.
—
South Central went 1-2 in the Centralia Tournament over the weekend.
The Cougars defeated Centralia on Friday, 11-6, and lost to Trenton-Wesclin, 6-1, and Waterloo, 11-0 on Saturday.
On Friday, Noah Powless got the win to improve to 4-2. He struck out three, walked three and gave up five hits. Smith struck out three and walked two in two innings of work.
Smith, Brett Harmeier and Hill each went 2-for-3, and Dre Hill was 2-4.
Smith had two doubles and four runs batted in. Hill had a double and an RBI, and Harmeier had one RBI.
Ryan Matheny took the loss against Trenton Wesclin, giving up 10 hits while striking out five and walking two.
Smith, Hill and Trevor Markley each had one hit for the Cougars, with Hill’s hit being a double.
Ratermann took the loss against Waterloo, striking out one, walking six and giving up seven hits. Geiler finished on the mound, striking out one and allowing three hits.
Harmeier had the Cougars’ lone hit.
—
Gillespie scored twice in the second, third and fourth innings, then added four in the sixth inning to defeat Vandalia, 10-6 on Friday.
Jake Bowen took the loss, striking out two, walking one and allowing seven hits.
Marcus Zimmerman went 3-for-3 for the Vandals, and Zach Schaal, Nathan Casey and Alec Schroeder had Vandalia’s other three hits.
Two unearned runs were the difference as Pana beat the Vandals, 4-2, last Wednesday at Vandalia Mutual Field.
Vandalia jumped out to a 2-0 lead in the first inning, and Pana knotted the score in the fourth inning. The Panthers took advantage of Vandalia errors to score twice in the fifth inning.
Kelly Jones went the distance for the Vandals, striking out four and walking four while giving up just four hits.
Schaal and Bowen were both 2-for-3, and Collin Nestleroad, Richie Well and Casey had the other Vandalia hits. Bowen had the Vandals’ lone RBI.
BES 15, Patoka 0
Noah Flowers threw a perfect game as Brownstown/St. Elmo defeated Patoka, 15-0, at Patoka last Wednesday.
Flowers struck out seven in the five-inning performance.
Lewis Brown, Cole Horner and Drake Hall each had two hits, and Landon Feezel, Flowers, Isaac Maxey and Nate Matthews each contributed a hit.
Hall had a double and a triple, and four runs batted in, and Brown drove in two runs. Feezel and Jeffrey Kelly each drove in a run. 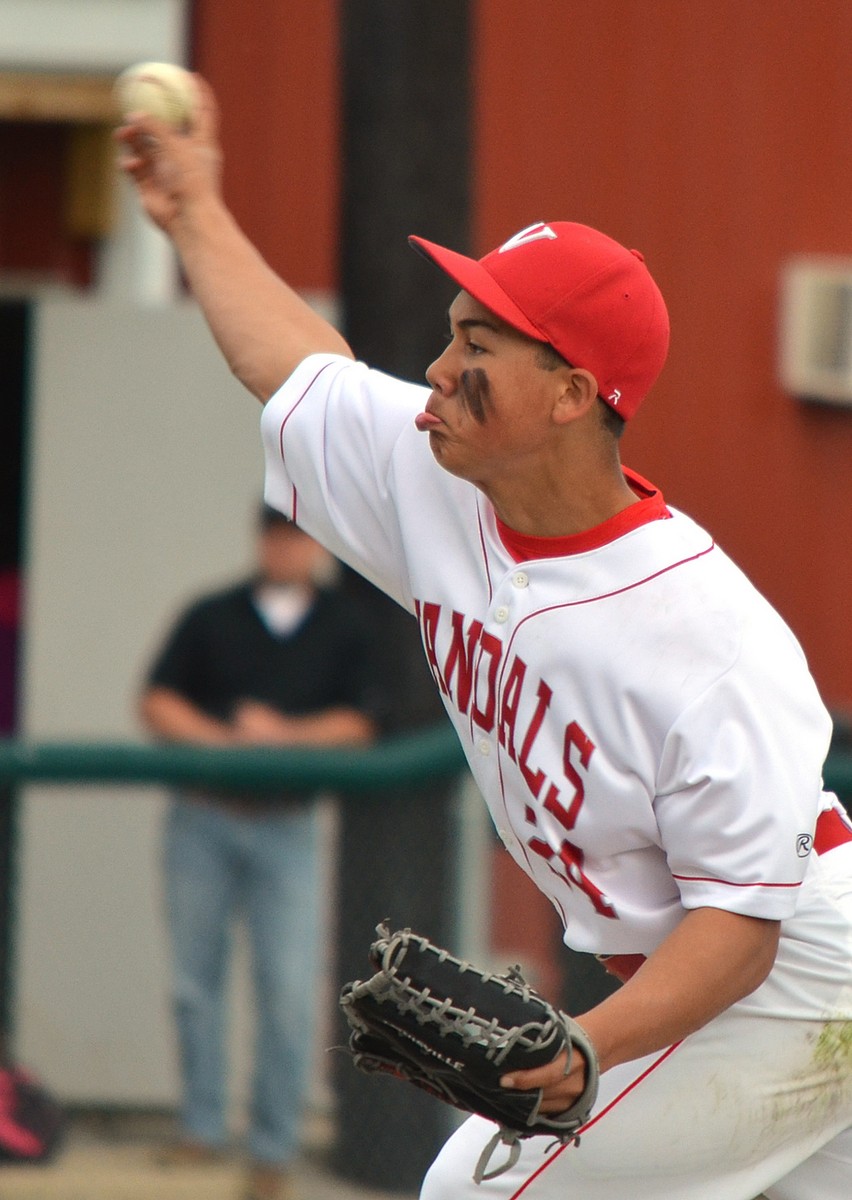 Kelly Jones went the distance in the Vandals’ loss to Pana at home last Wednesday.