A Vandalia City Council committee will begin weeding out the candidates for the city administrator post next week.

Alderman Russ Stunkel, chairman of the council’s insurance and personnel committee, reported at Monday’s council meeting that his committee will begin reviewing the applications next Monday at 3 p.m.
Mayor Rick Gottman reported last month that the city has received 17 applications for the position, which has been vacant since Jimmy Morani left in April 2010.
The council voted in October 2010 to hire a Northern Illinois man for the position, but on the day that he was supposed to start on the job, John McIntyre notified city officials that he had decided against accepting the position.
Since Morani’s departure, Gottman has served as the acting city administrator, with Executive Secretary LaTisha Paslay assisting with those duties.
Also at Monday’s meeting, the council voted to have a Brownstown firm perform some needed work on the exterior of Vandalia City Hall.
The city will pay Illini Restoration $19,800 for masonry repairs on the upper east side of city hall and $9,900 for repairs on the upper north side of the building.
After the vote, Alderman Dorothy Crawford asked if the city had solicited bids for the work.
Alderman Andy Lester, chairman of the council’s building and grounds committee, said that he had not sought bids because when Paslay notified him of the problems, he “went out and got a hold of somebody.
“My impression was that it was an emergency situation,” Lester said, explaining that he had learned that more masonry problems could cause the city’s warranty for the new roof could be voided.
In other action:
• The meeting closed with a heated discussion between Lester and local developer Dennis Grubaugh.
Lester said that he had spoken with Grubaugh about the lack of progress on improvements to his property at the southwest corner of Gallatin Street, across from the Statehouse, and also that he was concerned about the condition of the former Liberty Theater, particularly mentioning bricks falling from the building.
Lester said that he was addressing the issue at the meeting because he had not gotten any response after talking to Grubaugh privately.
Grubaugh addressed only the Liberty building, saying that he has continually had problems with youths pulling bricks from the building and breaking into the building.
He said that he has “complained to the police seven to nine times” about break-ins, and that he has given up on getting assistance from the city.
“How much am I supposed to put up, as a taxpayer, without police protection,” Grubaugh said.
About Grubaugh’s comments about bricks being pulled from the building, Lester said he was talking about bricks “15-18 feet up.”
“I’ve done a lot for the city, and I catch flack for anything I don’t take care of right away,” Grubaugh said.
Lester responded with, “What’s your definition of right away … six or eight months?”
Grubaugh said that he has tried to secure the building, and Lester said that he needed to board up openings. When Grubaugh said that he had, and youths had taken the boards off, Lester said, in a raised voice, “Well, I guess you need to board it up again, Dennis.”
When Grubaugh said, “If you want, I can just tear these buildings down,” Alderman B. John Clark said, “Some of them, it would probably be better if they were.”
• The council approved the purchase of a Kubota tractor for $11,067 from Bluff Equipment. It was one of two bids, the other being a bid of $11,240 from Sloan Equipment for a John Deere tractor.
Public Works Director Marlin Filer recommended a larger tractor than the one currently being used, saying that it could be used for chores other than just mowing.
• The council approved three Vandalia Lake lot transfers – lot No. 604 from Kay Pryor of Vandalia to Marcia Pemberton of Brownstown; lot 118 from Mike Ligibel of Troy to Glenn Scott of O’Fallon; and lot 116 from Brad Mann of Collinsville to Ligibel.
• The council approved an ordinance amendment that requires restaurants and other businesses that have grease traps to clean the traps at least once every 95 days, and to provide proof of the pumping to the city.
Failure to do so is punishable by a fine of up to $500.
• The council approved Gottman’s reappointment of Alyssa Matar, an employee in the office of City Clerk Peggy Bowen, as city treasurer through April 30, 2017.
Matar is paid $4,000 a year for work done as the city treasurer.
• The council approved a resolution urging Gov. Bruce Rauner and the Illinois General Assembly to stop Rauner’s proposed 50-percent reduction in state income tax revenue given to municipalities.
If that proposal were to go through, Vandalia would lose more than $350,000 annually.
• The council approved the final payment to Plum Concrete Creations, $1,054, for the construction of the new maintenance building at the city cemeteries.
• The council agreed to have its legal counsel draft an ordinance amendment that would allow the American Legion Auxiliary to have a special event license. With that license, the auxiliary will be able to host wine-tastings in conjunction with craft festivals at the Legion Home. 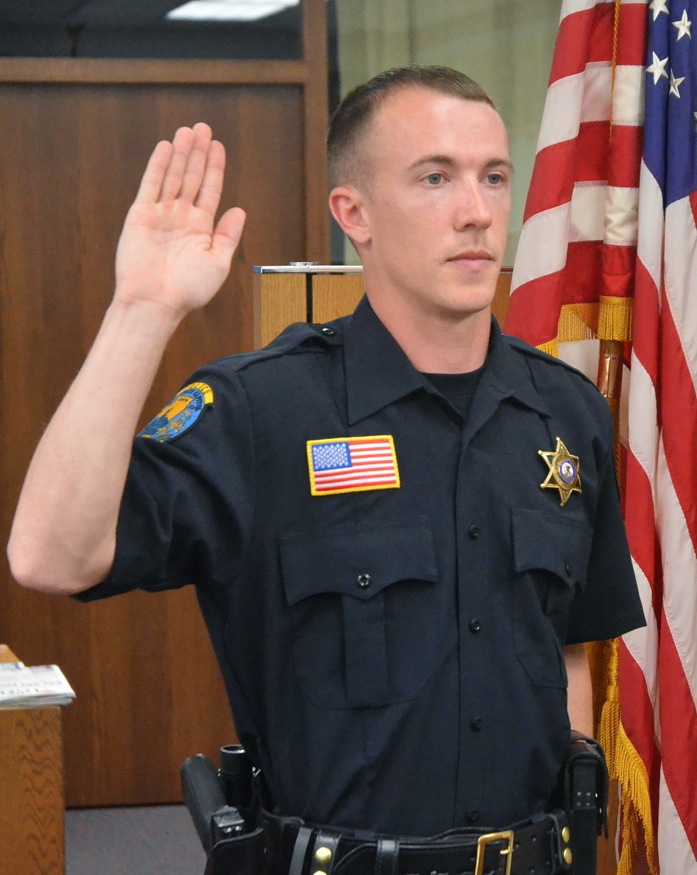 City Clerk Peggy Bowen, right, issues the oath of office to four of Vandalia’s aldermen on Monday night. Taking the oath were the three winners of seat at the April election, from right to left: Ken Hubler, Ward