By Charlene Jett
Oh, what a night – “A Night at the Tropicana” featuring the ”Babalou Band” at the Vandalia Country Club, presented by Friends and Families of Fayette County Hospital & Long Term Care. This fundraising event   was full of amusing characters, drama and laughter.

Everyone was served, drinks, fresh fruit and cheese appetizers, a pork loin dinner, desert and shared unparalleled company. This was a totally full house comprising about 20 large tables.  The “I Love Lucy” theme was a resounding hit, from the first heavy Cuban accented words from emcee Ricky Ricardo (Brian Stout) to the entertainer’s pretty polka dotted dresses.  The tables were set for fun including maracas, for attendee to shake and confuse the rhythm of Ricky’s Babalou Band. The musicians were Quinn Johnston-tenor sax, Lee Hicks-flute, Adam Turner-trumpet, Levi Halford-guitar, Cody Cox-double bass, Mary Halford (president of Friends and Families)-piano and Kristina Halford-percussions, and Lucy, with blazing red hair. Mark Miller assisted with electronics and microphone.
Lyn Gartke was “Caroline Appleby,” a sidekick of Lucy’s.
The Babalou Band played intense, passionate music with a Cuban accent, including the traditional “I Love Lucy” theme song. The first skit of the program was a retake of Lucy’s classic “Vitameatavegamin,” in which Lucy (Kristina Halford) becomes intoxicated from spooning in too much of her sponsor’s tonic while cutting a commercial. The stumbling speech, stammered out words and a slowing sinking posture, must have taken lots of practice, but it was worth it!
”Dean Martin” was Dale Timmerman, in a big, Cuban hat, who sang the old favorites, ”Everybody Loves Somebody Sometime”, “Red Roses for a Blue Lady” and “Mack the Knife.”
“Cuban Pete,” played by Dr. Kevin Childers, was almost more than the crowd could bear! I don’t think I’ve ever seen a more ridiculous sight; this singing and dancing was superb. He danced for all he was worth, to “Chica Chica Boom Boom.”
Greg Starnes, chief executive officer of Fayette County Hospital, played his guitar and sang. The Babalou Band then played more songs and delved into some real serious “St. Louis Blues.”
The classic high level of comedy and ridiculousness was reached when the many performers all restaged Lucy’s  “chocolate factory assembly line.” As one of the most famous comedy acts on TV, this was a side-bursting skit where Lucy (Kristina Halford) and her sidekick fall way behind the production quota of chocolates and end up spilling, eating and hiding in their clothes all the chocolates. The exuberant and overflowing applause was a salute to the performers, who almost had as much fun as the audience.
Again, the Babalou Band brought composure and sanity to the stage and played a charming rendition of “Celito Lindo,” and Ricky (Brian Stout) lip-synched Elvis’s “Hawaiian Wedding Song.”
Then, the Babalou Band took over and played the old favorite, “Girl from Ipanema.”
The final skit was “Lucy Teaches Ricky English,” with Greg and Robin Starnes playing Ricky and Lucy. Lucy was determined to get Ricky to lose his Cuban accent. So she pulled out some fancy high English books and started speaking with long difficult words, which he didn’t understand at all. Ricky threw in the towel when he realized that the pronunciations of through, cough and bough were all different. Lucy realized she must “listen” with a Cuban accent!   That was the living and loving end to a really good show!
Pat Hagy was given a dozen red roses for selling the most tickets for the event.

Dr. Kevin Childers performed in the role of ‘Cuban Pete.’ 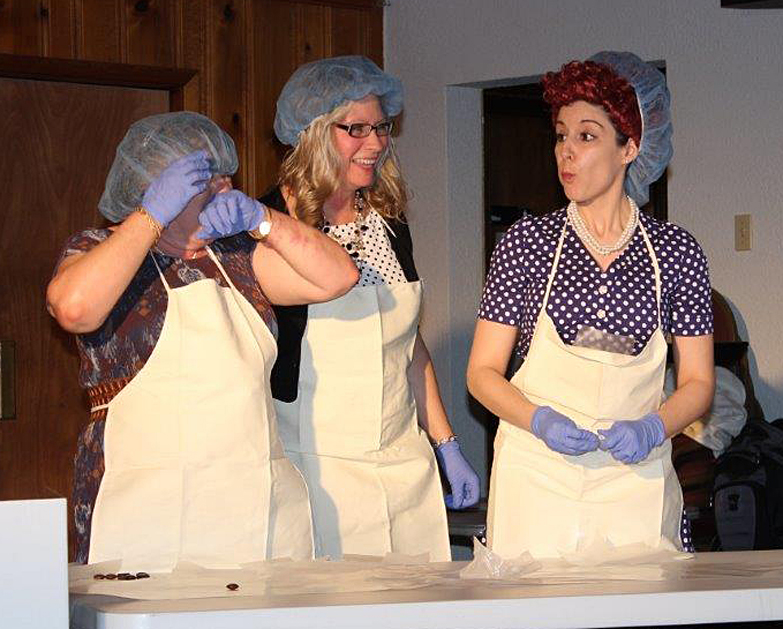 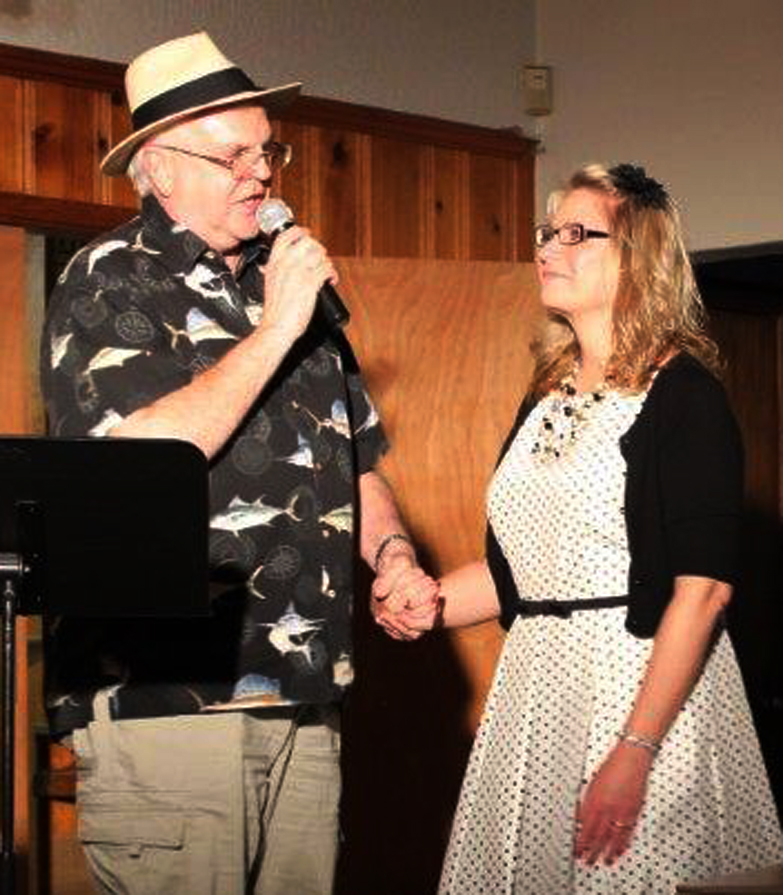 Dale Timmermann, in the role of Dean Martin, sings ‘Everybody Loves Somebody Sometime’ to Caroline Appleby, played by Lyn Gartke. 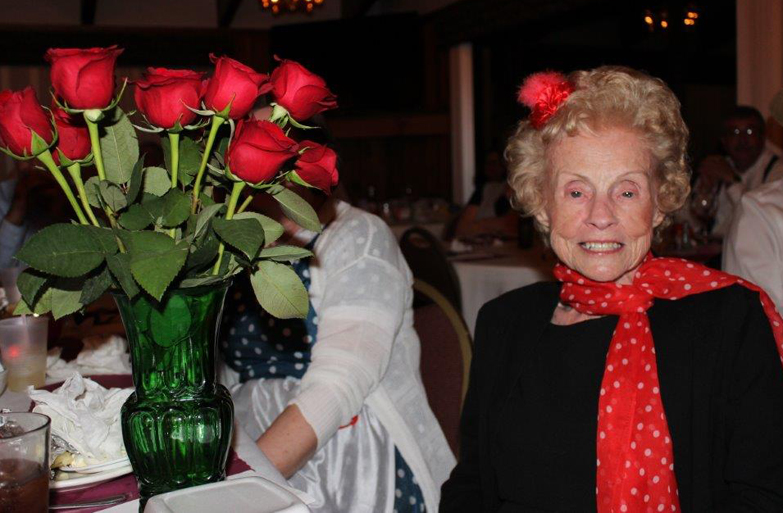 Pat Hagy received a dozen roses for selling the most tickets to the Friends and Families of Fayette County Hospital fundraiser. 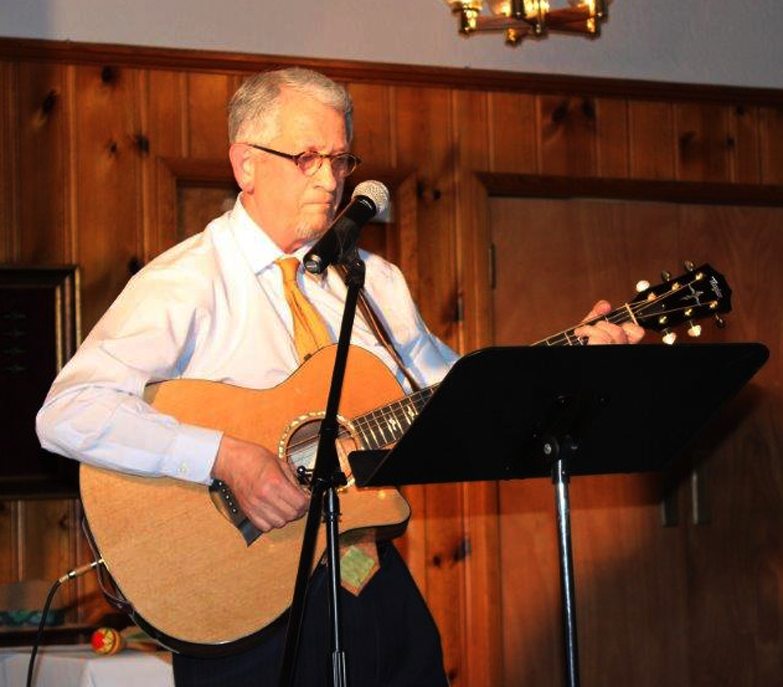