Vandalia’s Lewis Clymer remembers the first time that he was asked to portray Abe Lincoln … and doing so with hesitation.

That was 54 years ago, and now the man now known only as “Abe” has become a popular Lincoln presenter, so popular that he is the first member of a national group to host that group in his hometown.
This weekend, 11 years after the National Association of Lincoln Presenters held its annual convention in Vandalia, they are returning for a second visit.
Clymer has been a member of the Lincoln Presenters for more than 20 years, after his interest in portraying the 16th president was renewed.
His first appearance as Lincoln was in 1961.
“Wilma Hasler, the head of the Woman’s Club, asked me to do it,” Clymer said. “I told her, ‘I don’t have anything to wear.’
“She told me, ‘We’ll get that for you,’ and I got home one day and found the clothes hanging on the screen door.”
For a number of years, Clymer did not portray Lincoln. He “turned the corner” in 1994, at a time “I didn’t know anything about Lincoln.”
But, he renewed his interest in the role and joined the Association of Lincoln Presenters.
Like Lincoln, Clymer has campaigned; while Lincoln campaigned for public office, Clymer has pushed to have Vandalia host the ALP’s national conventions.
He was first successful for the 2004 convention, on the 170th anniversary of Lincoln’s birth in politics, as a state representative from Sangamon County when Vandalia was the state capital.
Now, the group’s second visit comes on the 150th anniversary of Lincoln’s assassination.
“They had a good time (when they were here the first time), and some of them remembered that,” Clymer said about securing Vandalia for a second convention.
“But, it also took a lot of politicking,” he said.
Hosting the group on the anniversary of Lincoln’s assassination is something memorable, but it also has its drawbacks, Clymer said.
With the spotlight on Lincoln so heavily again this year, some of the association’s members will be busy fulfilling other obligations across the country, he said.
On Friday, ALP members will be provided presentations at Vandalia’s 10 Looking for Lincoln wayside exhibits and take tours of the the Fayette County Museum and National Road Interpretive Center before holding their annual business meeting at the statehouse.
While many of the ALP functions over the weekend are just for members, there will be a number of opportunities for local residents to mingle with the Lincolns … and some Mary Todd Lincolns.
The activities open to the public include the presentation on Friday evening by Vandalia native Dr. Paul Strobel, a professor at Webster University who has authored a number of books. His first book, “High on the Okaw’s Western Bank: Vandalia, Illinois, 1819-1839,” is on the city’s history.
Strobel’s presentation at First United Methodist Church is scheduled to begin at about 7:30 p.m. It follows a meal for ALP members, but Clymer said that the public may attend, though there is a limited amount of pork ribeye and salmon for the $19 meal.
A second public event, “Drinkin’ with Lincoln,” gets under way at 8 p.m. at The Copper Penny.
A Lincoln Forum at 9 a.m. on Saturday at the Vandalia Statehouse will feature ALP members telling Lincoln stories. That’s followed by a picnic lunch on the Statehouse lawn at 11:45 p.m., with the cost being $8; a Lincoln parade on Gallatin Street at 1 p.m., followed by a cemetery walk at the Old State Burial Ground; and a strawberry social and Mary Todd Lincoln meeting at 3 p.m. at Holy Cross Lutheran Church.
The Saturday evening schedule at the Vandalia Moose Lodge includes a buffet dinner at 6:30 p.m., at a cost of $22, and a Lincoln Ball from 7:30-9:30 p.m. Admission for the ball is $5 for people dressed in period costume and $10 for those who are not.
The convention winds down with a 10:30 a.m. church service at Church of God on Thrill Hill Road northwest of Vandalia. 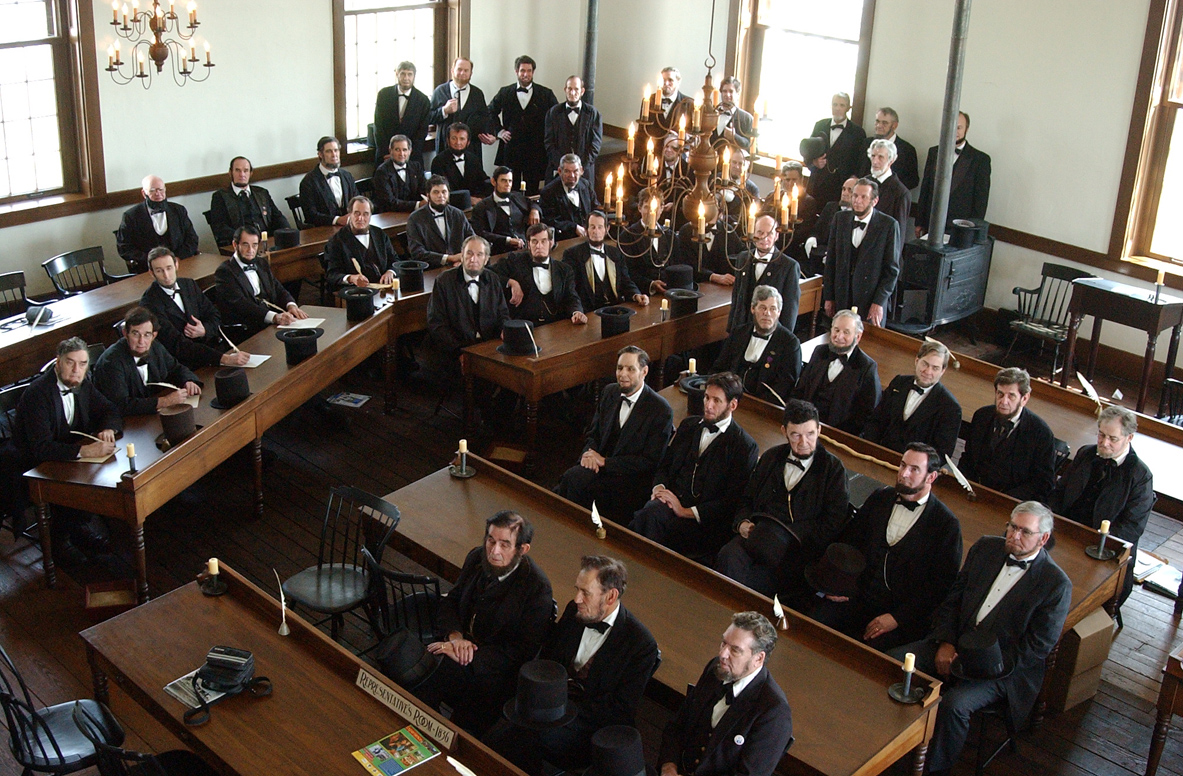 Members of the Association of Lincoln Presenters participate in the group’s business meeting during the 2004 convention in Vandalia. 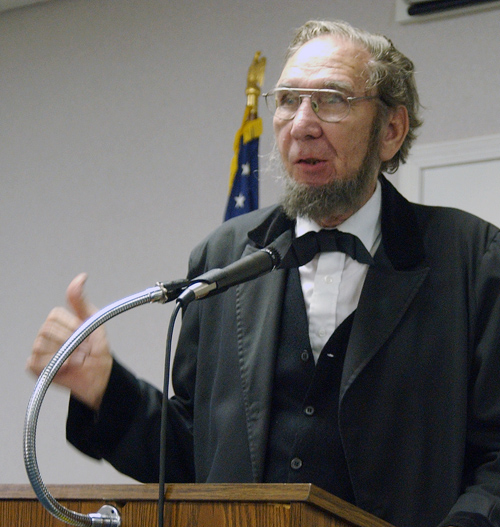