One member of Pinnacle Foods’ executive leadership team said that several factors led to having the company’s St. Elmo plant take on its newest product line, with its location and available space being two of those.

But, its employees and the people of the area topped that list of assets, according to Tony Fernandez, Pinnacle’s chief supply chain officer.
“Most importantly, the employees (at St. Elmo) had the similar expertise to what was needed to make Wish-Bone, and it’s a great area to hire new employees,” Fernandez said during a program held last Wednesday to celebrate the addition of Wish-Bone salad dressing to the St. Elmo facility.
The Wednesday program included a ribbon-cutting ceremony to celebrate Pinnacle’s 70,000-square-foot renovation and expansion, as well as more than doubling the number of employees in St. Elmo, from 85 to 175.
The company relocated the Wish-Bone line of salad dressings, which was acquired in 2013, from Independence, Mo., and plant Manager Thomas Perkins said that means that the St. Elmo facility is now “running five lines.”
In addition to Wish-Bone products, that plant is also producing Mrs. Butterworth’s and Log Cabin syrups, and Open Pit barbecue sauces.
“We are doing something that people do at home in their kitchens,” Perkins said. “We’re just doing it on a grander scale.”
Perkins said that the St. Elmo plant produces more than 7 million cases of syrup and barbecue sauce each year, and that Pinnacle has now added 17 million units of salad dressing annually.
“Thirty truckloads of material are leaving here every day,” Perkins said.
“We have the capacity to make 50 unique flavors of salad dressing, in addition to the 60 varieties of syrup and barbecue sauce that we make here,” he said.
“One of the things that I’m most proud of is bringing the two operations together and turning this into one larger plant,” Perkins said. “It has made St. Elmo a really nice place to work.”
Perkins recognized local, state and federal officials for their involvement in expansion project, as did Fernandez and St. Elmo Mayor Ernie Myers.
Fernandez said that Wish-Bone had the No. 1 Italian salad dressing and ranks third overall in the salad dressing business.
The acquisition of Wish-Bone, he said, “grew the company by 60 percent, and we became the fifth-largest frozen food company.”
St. Elmo was the right place for Wish-Bone, Fernandez said, “for many reasons.
“The plant is located in the heart of the Midwest and in the proximity of two of our other Illinois facilities.
“St. Elmo had the space and the capability for expansion,” he said, adding that the employee base was the biggest factor in the decision.
“This is the largest capital project in Pinnacle history,” Fernandez said. “It is a highly complex undertaking.
“We expect to reinvigorate this ionic brand through lots of innovation, renovation and identifying opportunities for efficiencies to reinvest back on the brand.
“In addition, we expect that this project will have many positive effects in this community,” Fernandez said.
“It is a great example of government working with business to make something happen,” he said. “We have a bright future ahead here in St. Elmo.”
Among those helping Pinnacle Foods with the expansion project were U.S. Congressman John Shimkus (R-Ill., 15th District) and state Rep. John Cavaletto (R, 107th District).
Shimkus told Pinnacle employees that they “should have a lot of confidence in job security. Pinnacle has invested a big hunk of change, not only to keep jobs, but to also grow jobs.”
Cavaletto said that he was glad to see a company move into Illinois, and instead of moving out, as has been the case numerous times.
“We’ve got to be more friendly to people and to companies that want to come here, and I think we have a governor to do that,” Cavaletto said.
Myers said, “This is a big day for St. Elmo.”
St. Elmo’s mayor praised Shimkus and Cavaletto for their help in acquiring state and federal monies to assist the project, particularly noting that they stepped forward with $340,000 that would have had to come out of the city’s coffers.
Myers noted that St. Elmo has annexed land south of Interstate 70 into the city, formed a second Tax Increment Financing district and put land in the I-70 interchange within its Enterprise Zone boundaries.
“We’re going to build in this cloverleaf,” Myers said.
He also praised the South Central Illinois Regional Planning and Development Commission and the Illinois Department of Commerce and Economic Opportunity for their assistance, and commended the city council and City Treasurer Mary Magnus for their input. 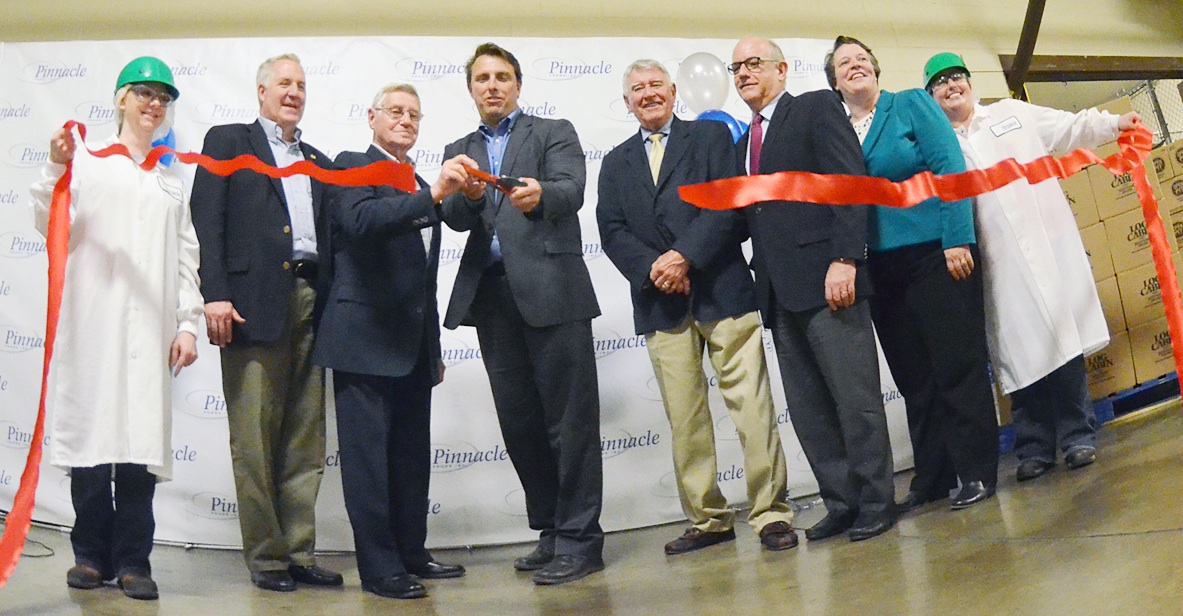 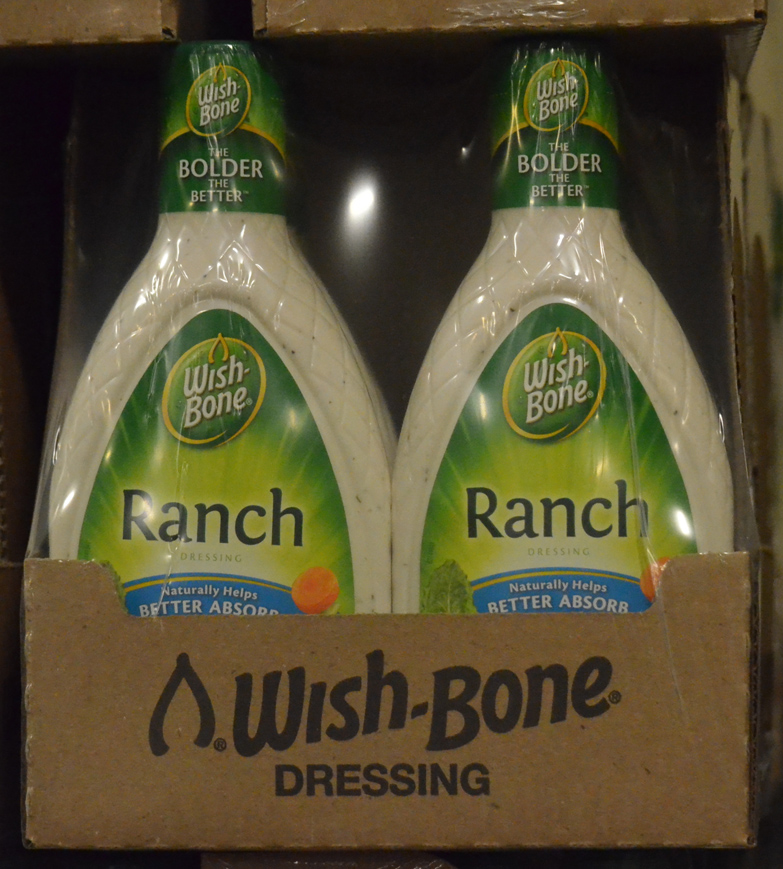 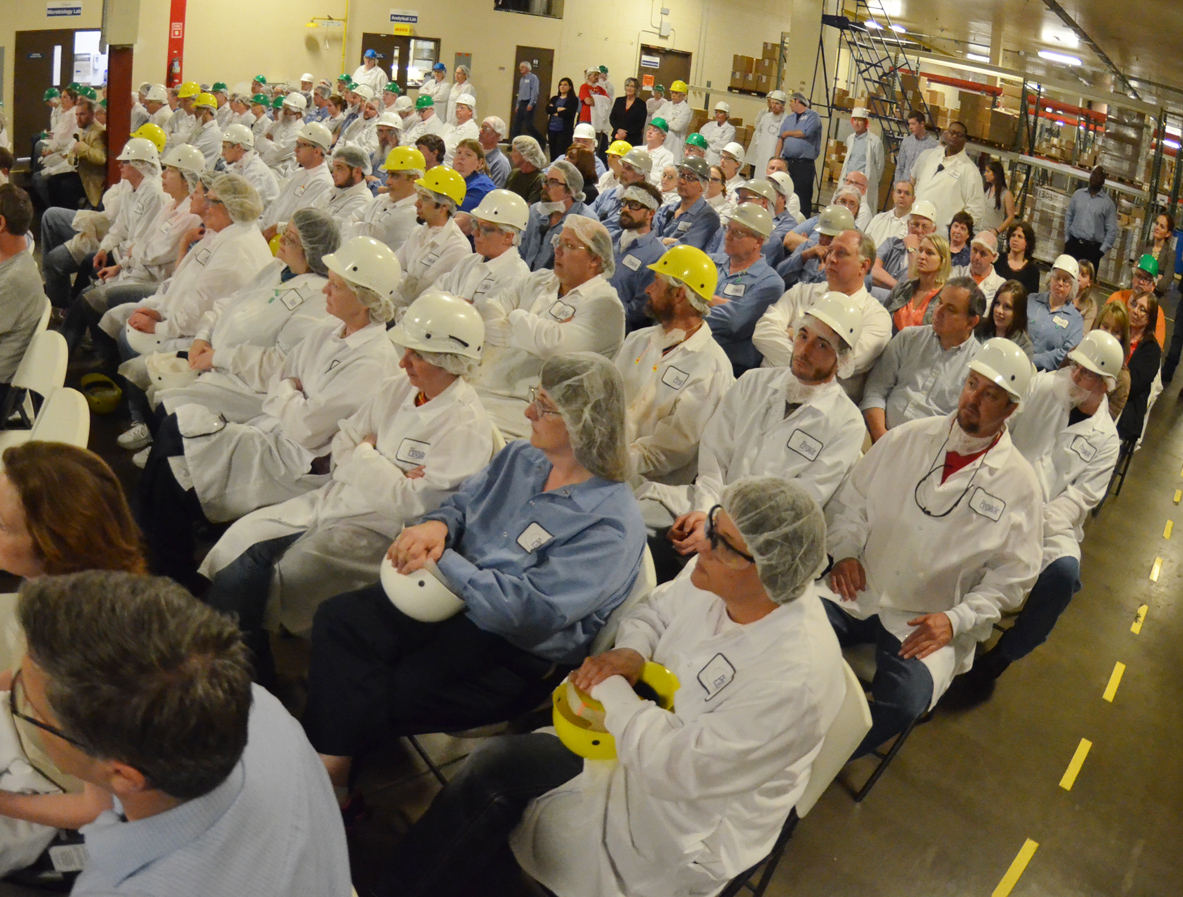 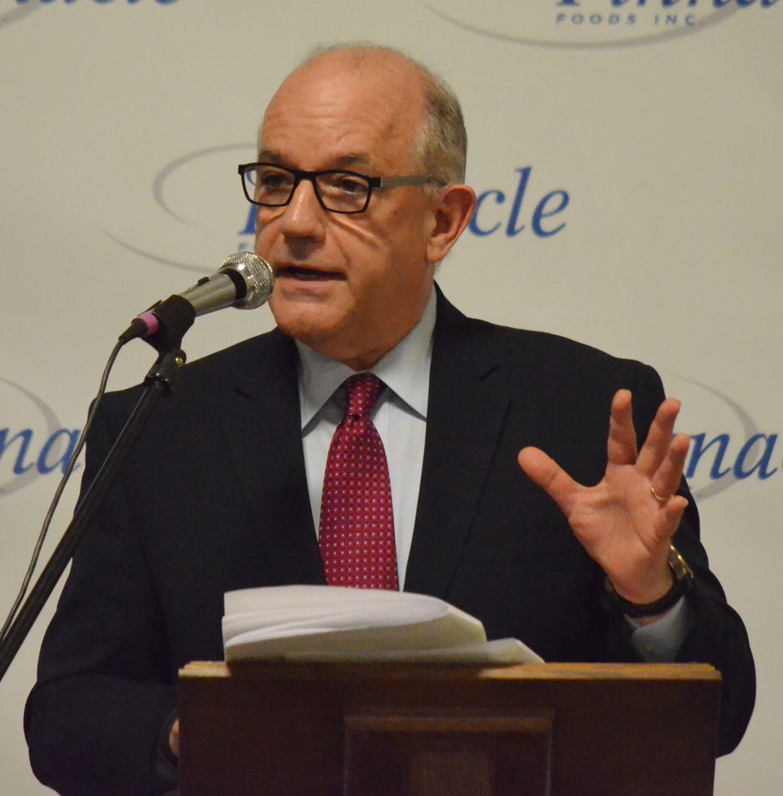 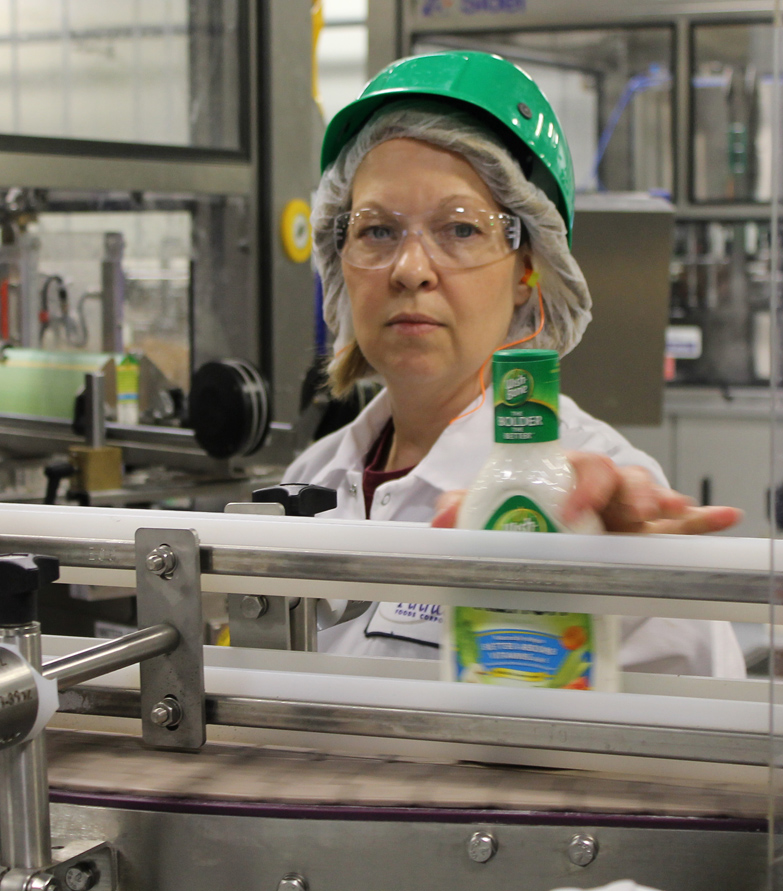 In a photo provided by Pinnacle Foods, Kim Kelly, an employee at the St. Elmo plant, works on the labeling line. 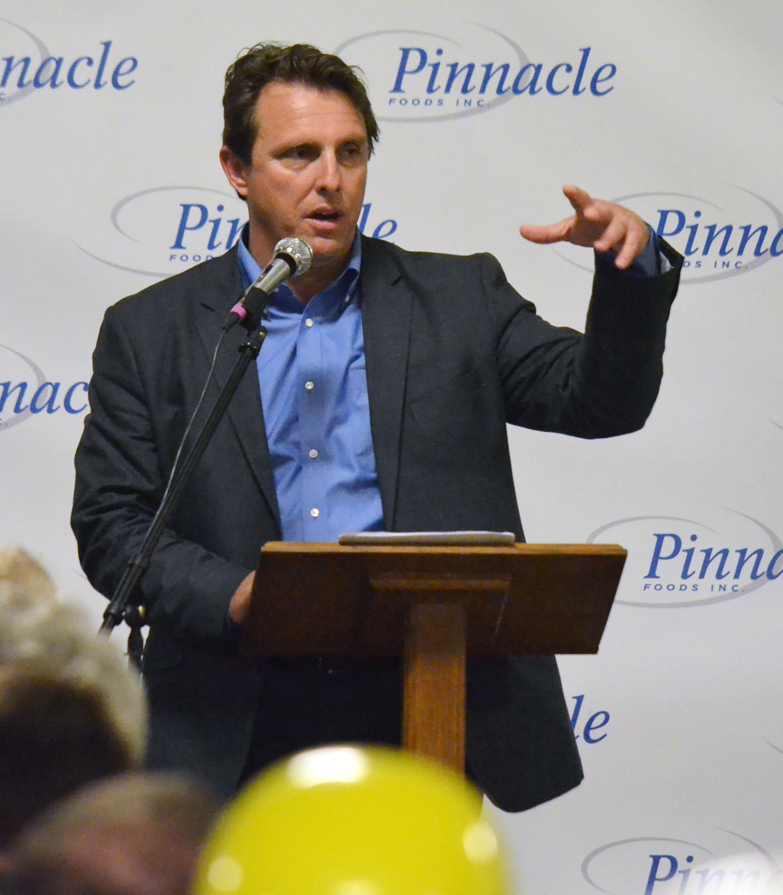 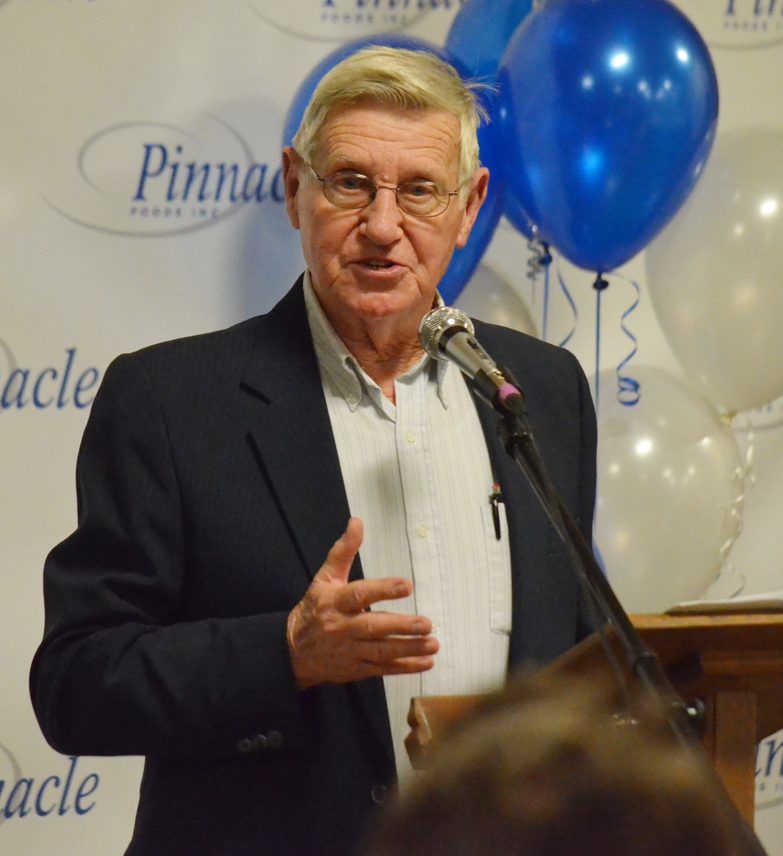